The Carolina Panthers kept their hopes for the NFC's No. 2 seed in the playoffs with a come-from-behin victory over the upset-minded Tampa Bay Buccaneers, 22-19. Panthers QB Cam Newton ran for a game-high 52 yards and the game's lone rushing touchdown on the afternoon as both kickers combined to make seven field goals in the contest.

Tampa Bay out-gained Carolina by a 392-255 margin, however it was three costly turnovers that proved to be too much for the Bucs to overcome, especially the last of the trio. The final turnover came with just :35 seconds remaining, by means of a fumble by Bucs QB Jameis Winston with the Bucs a mere three points away from at least tying the game. Future Hall of Famer, defensive end Julius Peppers came away with the ball to push the Panthers to 11-4 on the season, and send the Bucs to 4-11. With that, we give you our PFF-exclusive takeaways from the contest for each team.

Norwell was an absolute road grader on Sunday for the Panthers. He was great at pushing back interior defenders on double teams or single-handedly. Norwell finished with an elite 91.1 run blocking grade, the highest in the game but he was also no slouch when protecting the franchise either. Norwell did not allow a single on 32 snaps in pass protection, and finished with an 85.6 pass protection grade.

On the other side, Williams was very solid for the Panthers. He too had a balanced game run- and pass-blocking. He allowed one hurry on 32 pass protection snaps and he too showed his excellent strength run blocking by mowing back defenders for an 81.6 run blocking grade.

Short is difficult to block at his best, especially for the Bucs’ backup offensive lineman in this one. He took advantage of their inexperience, collecting a pair of sacks and three pressures for an 89.8 pass-rush grade. Short did make a major mistake mid-way through the fourth quarter, committing a personal foul penalty well after the whistle on a play where an endzone holding call would have presented Carolina with a safety, but that moment of indiscipline aside, Short feasted.

Worley has been largely solid throughout his two seasons in the NFL, offering particular help against runs into his zone in the flat. He tied for the team-lead in stops (four) against Tampa, but was liable in coverage against the Bucs. He gave up 145 yards and a touchdown on seven targets by Jameis Winston, allowing a perfect passer rating of 158.3 when targeted.

Despite displaying all the arm talent imagineable against Carolina, ball security once again proved Winston's undoing. He managed to lose the handle on the ball on three occasions against the Panthers, including a game-sealing fumble, with a chance to drive and tie the game with a field goal. He finished the game with gaudy passing numbers however, including four deep pass connections on seven attempts for 112 yards and a touchdown on passes targeted 20-plus yards downfield.

Injuries have ravaged the Bucs' offensive line this season, and those in place of injured starters have not fared too well for Tampa Bay. Backup guard Kevin Pamphile endured a rough afternoon facing off against Kawann Short and Co. The All-Pro defensive tackle pushed Pamphile off the line on Carolina's game-winning sack. That play represented one of five combined pressures conceded by Pamphile as the Panthers' exotic blitz looks gave Tampa's interior particular trouble. In total, the two guards and center Joe Hawley gave up three sacks and eight pressures combined.

Upon his return to the lineup, David was solid behind the line of scrimmage for the Bucs. He was great in run defense, racking up six stops, however he did miss three tackles which brought his grade down, but was still the most influential defender against the run for the Bucs. David finished with a 87.9 run defense grade and was the highest-graded Buccaneer in this game.

The star of the Tampa Bay secondary had another solid game on the outside. Grimes was targeted five times in 32 snaps in pass coverage, allowing only two receptions for 30 yards. When targeted, Grimes allowed only a 60.4 passer rating when targeted and his 81.4 coverage grade was highest on the team. 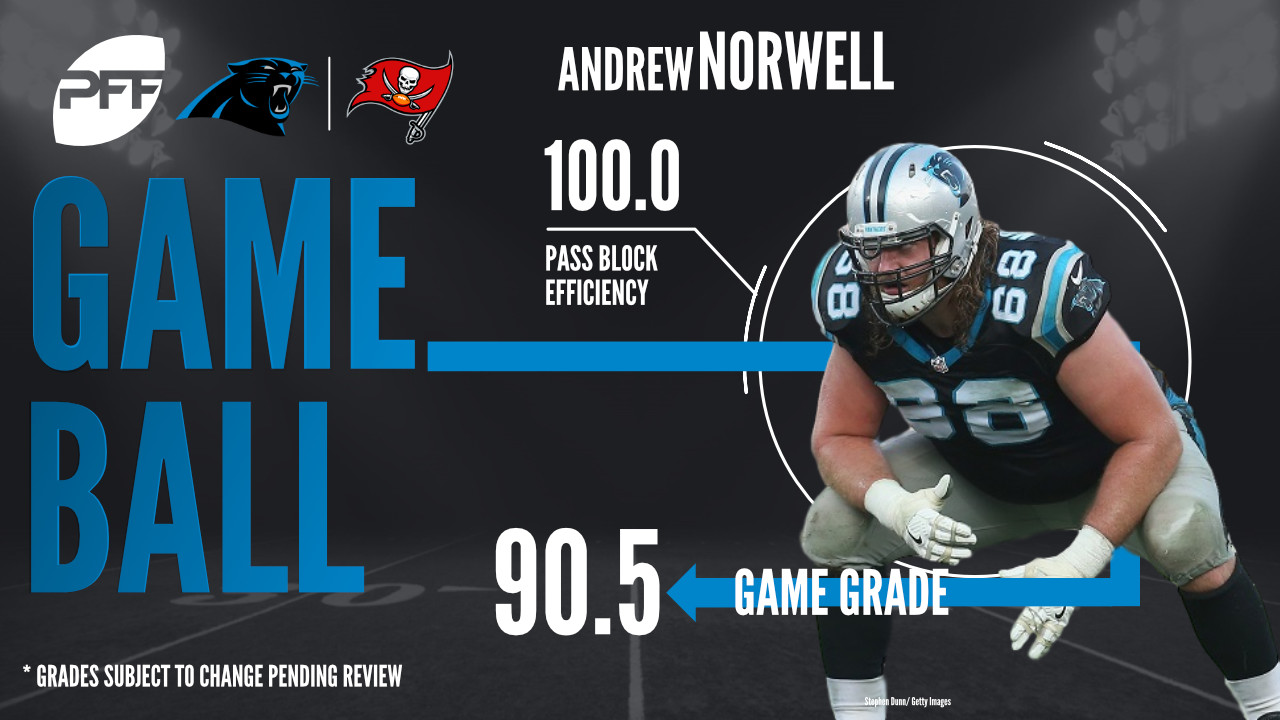