The Buffalo Bills treated their fans to another home victory in the cold, this week against the visiting Miami Dolphins, by a score of 24-16. Bills QB Tyrod Taylor connected on a touchdown pass to running back LeSean McCoy before running in another touchdown himself to give the Bills a 21-6 halftime lead, that they would not relinquish.

Dolphins QB Jay Cutler tossed three interceptions in the contest, including one on Miami's final play after they had gotten an onside kick attempt, down just eight points. Cutler was pressured and tossed an errant ball into double coverage to be intercepted by Bills rookie CB Tre'Davious White, ending any threat of a comeback. Cutler's three interceptions were the game's only turnovers and with that, we give you our PFF-exclusive takeaways from the contest for each team.

Clay was heavily involved in Buffalo's game plan as he was the team's most frequently targeted receiver by a significant margin and was used often in run blocking too. While Clay did drop two of his seven catchable targets and gave up a couple tackles in the running game, he made several contested catches and led Buffalo's receivers with 68 receiving yards.

Although Taylor slightly struggled on deep passes and completed just one of his six pass attempts that traveled at least 20 yards from the line of scrimmage, he was a big reason behind Buffalo's win on Sunday afternoon. Buffalo's signal-caller did well to extend plays and averaged 8.5 yards per quarterback scrambles; however, his touchdown run came on his only designed run, a quarterback draw.

Continuing an impressive rookie season, the Bills first-round draft pick allowed just three receptions for 58 yards from eight passes thrown into his coverage. One of those was a long shot down the right sidline to DeVante Parker, but White also had a pass breakup and an interception, finishing the game having allowed an NFL passer rating of just 24.0.

White wasn't the only Bills cornerback to find success today, with Shareece Wright not allowing a reception from the three passes thrown into his coverage. Adding an interception, he ended the game with an NFL passer rating allowed number of 0.0.

The final offensive play of the game looked to be miscommunication, but it was a rough day for Cutler with some poor interceptions. Attempting seven passes where the ball travelled at least 20 yards downfield, Cutler went 1-of-7 for 36 yards with two interceptions. When the Bills were able to get pressure on him, his NFL passer rating of just 30.2 was poor, but it wasn't much better (52.7) when pressure didn't get there.

The Dolphins season hasn't gone according to plan, but one huge positive when they look back on the year will be the emergence of running back Kenyan Drake. In this game, 69 of his 76 yards came after contact, and he also forced two missed tackles on 17 carries. He did drop two of the seven catchable passes thrown his way, but with nine total targets in the game, he's clearly going to be the focal point of the Dolphins offense at the end of the year.

Harris started for just the third time this season and played 43 snaps, the second-most so far in his career. The rookie edge rusher did take advantage of the opportunity as he led the Dolphins with eight total pressures (two quarterback hits and six hurries) on 27 pass-rushing snaps.

The rookie Allen played a big role in Miami's defense limiting LeSean McCoy to just 0.4 yards before contact as he led the Dolphins defense with three defensive stops. The Dolphins linebacker played a season-high 34 snaps and did not miss a single tackle for the second-straight week. 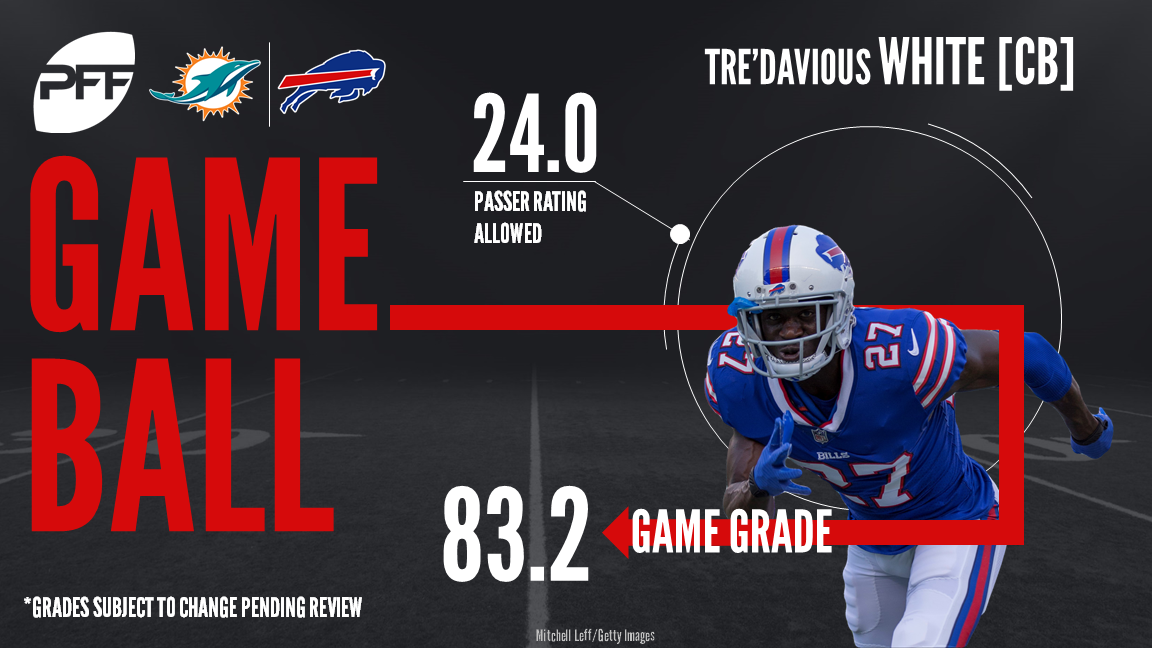