The Arizona Cardinals defeated the San Francisco 49ers in Levi's Stadium 20-10. RB Adrian Peterson had himself a big statistical day running the ball and QB Drew Stanton did enough to help protect a late lead.

Stanton threw for 201 yards and two touchdowns on 30 attempts, but the engine that kept the Cardinals offense moving throughout the game was Peterson, who amassed 159 rushing yards on 37 carries.

QB C.J. Beathard threw for 294 yards on a whopping 51 attempts, but had no touchdowns and an interception, although he did run for a score. RB Carlos Hyde didn't have a major statistical impact before he was thrown out of the game for fighting.

Defensively, the Cardinals got after Beathard early and often and kept him off balance. The 49ers got LB Reuben Foster back today, and he was an immediate impact player for a 49ers team that already boasts a strong defensive line.

Stanton finished 15-of-30 for 201 yards with two touchdowns and an interception, and he was also victimized with two drop passes. He finished 2-of-4 on deep targets for 75 yards, and his 95.8 passer rating on deep passes is sixth best this week with just two games remaining. Using play action, Stanton was only 3-of-7 for 12 yards along with his lone interception of the day. Stanton made nice throws to move the chains regularly, although the Cardinals chose to get more conservative with their game plan as they tried to protect a fourth quarter lead.

This grade is suprisingly low but his late-game fumble hurt his overall grading. On the day Peterson averaged 2.97 yards after contact and forced eight missed tackles on 37 rushing attempts. Peterson had a 37.1 percent breakaway percentage (the percentage of yards that come on runs of 15 yards or more), showing he still has an explosive burst. Peterson finished with 3 runs of 15 yards or more on the day.

Peters, an eight-year veteran, is arguably in the midst of his best season to date and it continued in Week 9 as he led the Cardinals entire team in terms of overall grade. Peters had an average day in run defense (he only had to defend against the run nine times on the day) while tallying three pressures (one of each: hurry, hit and sack) on 22 pass-rush snaps.

The veteran linebacker earned two pressures (a hit and a sack) on just nine pass-rush snaps and also tallied an additional stop. He also had a fine day in coverage, as he nabbed his 20th career interception on a pass that Beathard threw off of his left tackle's helmet. On throws where Dansby was the primary defender in coverage, he allowed just three catches on seven attempts for a total of 19 yards.

Beathard held his own when he was able to throw without pressure bearing down on him, going 22-of-37 for 270 yards and an 82.0 passer rating on throws without pressure. When under pressure he completed just 2-of-14 attempts for 26 yards and an interception, good for a 9.8 passer rating. The rookie from Iowa has now attempted 56 throws while under pressure this season, he's completed 20 of them for 172 yards, one touchdown and two interceptions, all of which adds up to a 35.7 passer rating.

It's been a bit of a roller-coaster season for Fusco, who had two game-grades north of 80.0 to go with four game-grades south of 50.0 before he entered Week 9. Against the Cardinals he led the 49ers offense with an 80.1 run-blocking grade and wasn't responsible for a single pressure on the afternoon.

Foster had four tackles, four assists, and three stops in run defense. Foster's athleticism and explosiveness was on display, as he often beat the blocker assigned to him and attacked the ball. Foster and Peterson were going toe to toe on downhill isolation runs all day and it was fun to watch.

Buckner had three stops in run defense, while adding a quarterback hit and hurry rushing the passer from the interior. Although Buckner struggled at times taking on double teams in Arizona's downhill power rushing schemes, he was still able to make plays using his long frame and athletic ability. 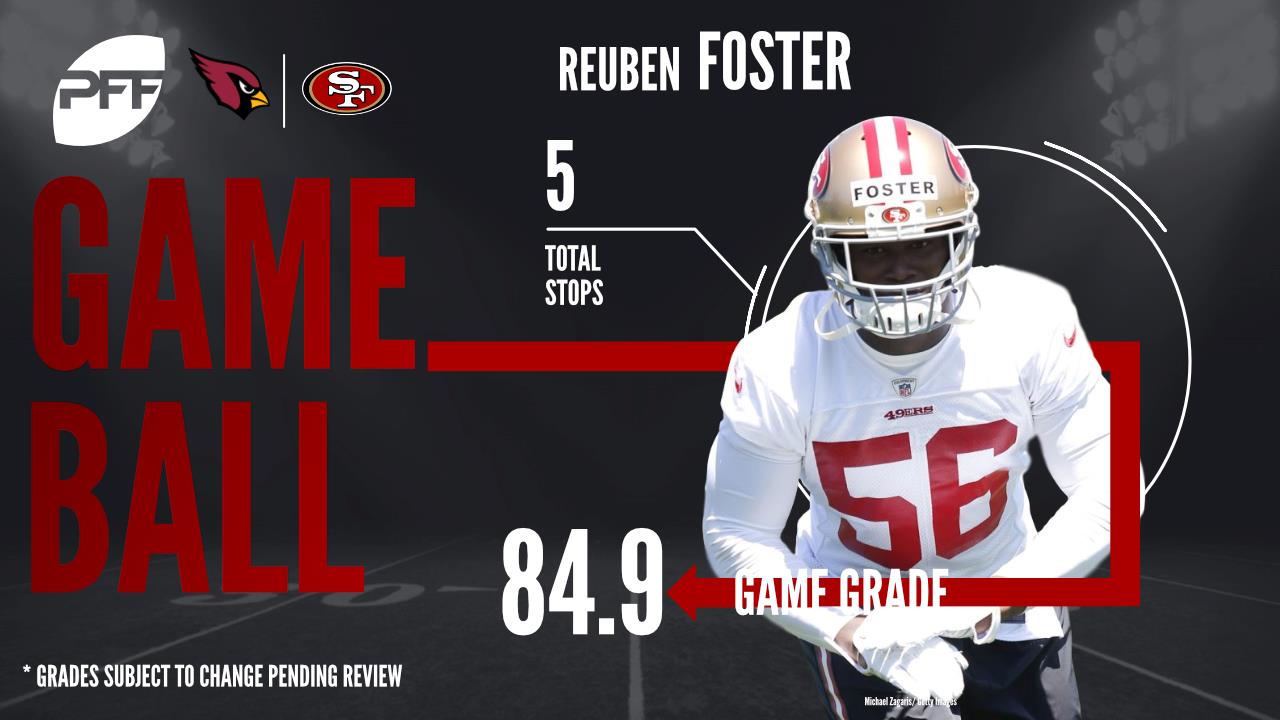