The Ravens’ offense poses a unique challenge to the Chargers

The Los Angeles Chargers’ defense is well suited for the modern NFL. They have two outstanding pass rushers in Joey Bosa and Melvin Ingram, who both rank among the top ten edge defenders in pressure rate since the start of 2016. They have a host of talented players in their secondary, such as Casey Hayward Jr. and Desmond King II. They added a player perfectly suited to serve as a matchup weapon in the modern defense in Derwin James, who can line up anywhere from free safety to the line of scrimmage as a pass rusher. Yet, they will not be looking forward to seeing the offense that they will be facing on Sunday, and that’s because the offense that the Baltimore Ravens are running is far from the modern NFL offense that the Chargers have built their defense to stop. 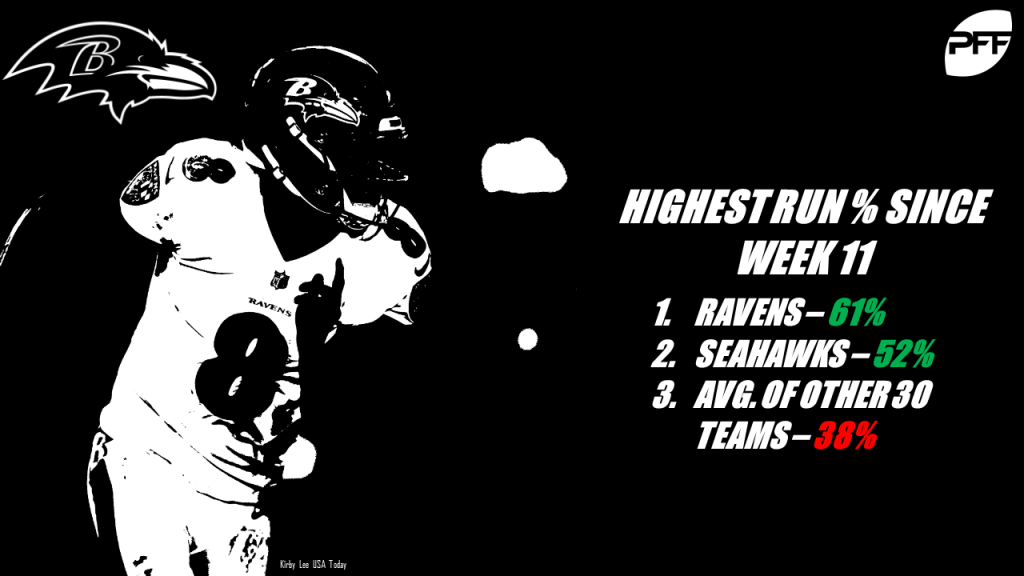 Since Lamar Jackson took over at quarterback in Week 11, the Ravens have run the ball on 61% of their offensive snaps. To put in perspective just how run-heavy that is in the league today, the only other team to run the ball over 50 percent of the time since Week 11 was the Seattle Seahawks at 52%. The NFL average over that span across the other 30 teams in the NFL was 38%. The Ravens are doing something that no one else in the league is doing, and despite the fact that passing the ball is significantly more efficient than running, it’s working well in combination with their stout defense.

And unfortunately for the Chargers, that run-heavy approach is the thing that they aren’t well suited to defend against. On the season, the Chargers have the fifth-worst PFF team run defense grade at 73.2. They only have one true linebacker, Jatavis Brown, with over 500 defensive snaps played this season, and he won’t be available for the rest of the season due to the ankle injury that he suffered last week.

Without Brown, Hayes Pullard will likely draw the start, but he has played just 92 snaps on the season with 45 of them coming last week. The Chargers also employ safety Adrian Phillips in a linebacker role in the box, but listed at 5’11”, 210 pounds, he lacks the size typically associated with the linebacker position.

The first play that the Ravens’ offense ran in their meeting with the Chargers two weeks ago shows the kind of problem that they can pose to an undersized defense better suited to defending the pass. After Marshal Yanda clears out Darius Philon to the inside, Orlando Brown Jr. gets up to the second level and easily blocks Phillips out of the play. The result is a 43-yard gain on the ground for Gus Edwards.

Later in the quarter came another big gain on the ground for the Ravens, and once again, it was inabilities to get off blocks at the second level that opened up the big play. After chipping Bosa inside, Nick Boyle got up to Brown and controlled his block long enough to allow Jackson’s speed and athleticism to get in the open field and do the rest.

Defenses have begun to adjust to the passing attack that has dominated the league in recent years. The Chargers are one of those defenses, opting to employ smaller, hybrid players such as Phillips and James in the box to better cover tight ends and backs out of the backfield rather than larger, traditional linebackers to stuff the run game.

That’s why the Ravens have posed such a challenge to NFL defenses in recent weeks. They present something that no defense has gone up against this year – an offense that runs the ball on over 60% of its snaps. In a league where passing is becoming more and more prevalent, they have gone against the grain.

Edwards and Kenneth Dixon have done an excellent job of running north-south, while Jackson poses a constant threat to break a big play as a runner on the keep. With the top two options at linebacker for the Chargers now done for the season on a team that already wasn’t strong against the run, it remains to be seen whether or not they will be able to slow the Ravens on the ground. It appears as if the Ravens have the edge in the matchup, but the Chargers will be the first team to face the new Ravens’ offense for the second time. Your move, Gus Bradley.