As the New England Patriots and Atlanta Falcons prepare for Super Bowl LI, get ready for kickoff with Pro Football Focus' visual preview of the game.

The PFF analysis team has graded every snap taken by every NFL player since the 2006 season. With that incredible breadth of data collected, our team has seen some exceptional Super Bowl performances by quarterbacks. In the PFF era (since that 2006 season), here are the highest-graded Super Bowl outings by QBs thus far. 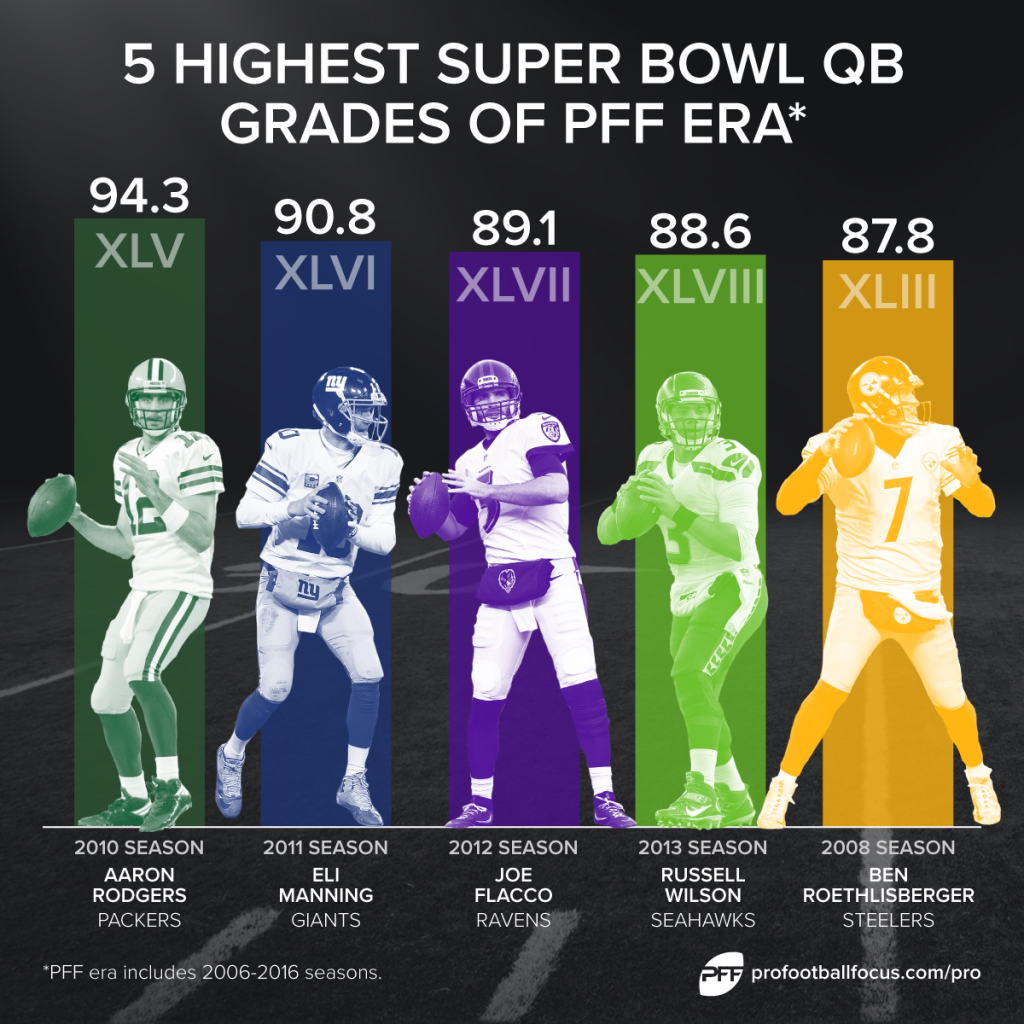 One of the quickest things to notice — especially given the two teams facing off this Sunday — is the absence of Tom Brady among the five top-graded QBs in that span, despite having played in three Super Bowls over that period. In the interest of providing an even clearer picture heading into this Sunday's game, the analysis team went back and graded each of Brady's Super Bowl appearances, including those prior to 2006. 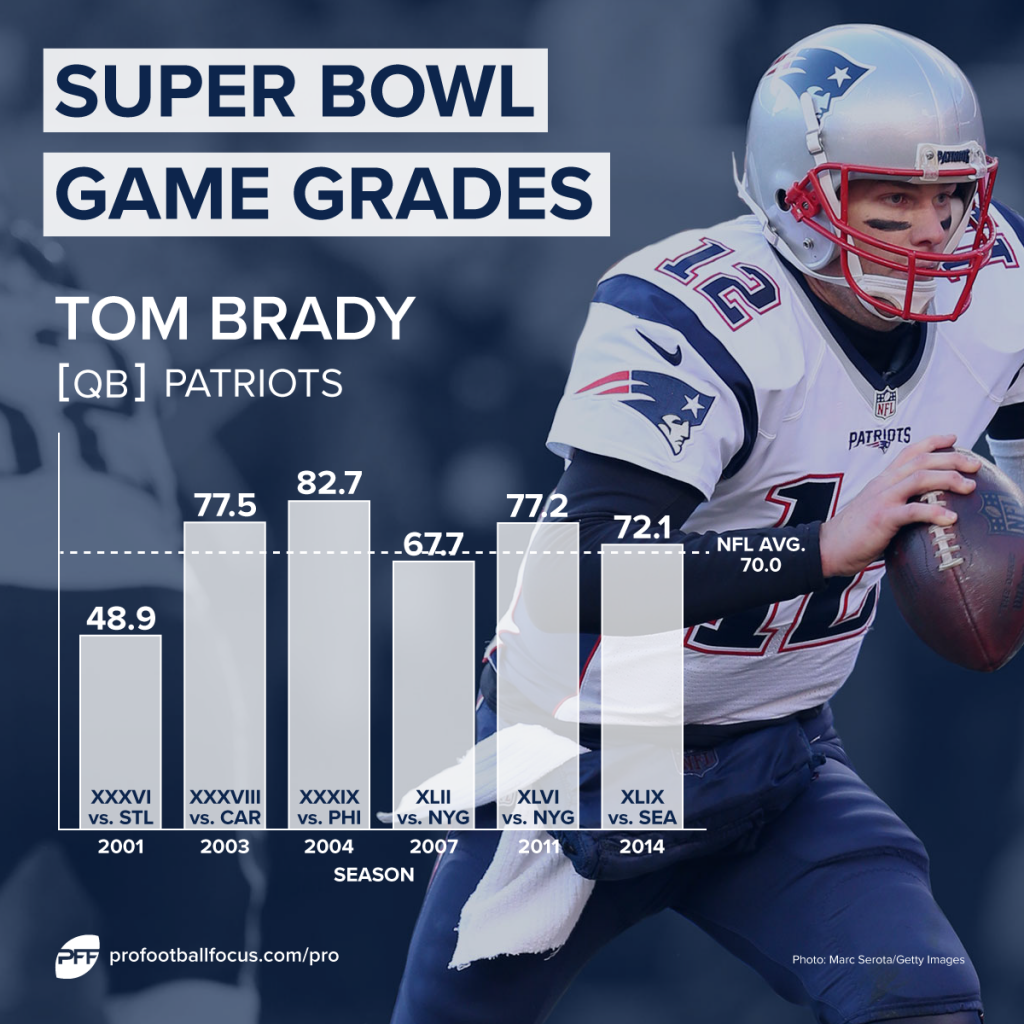 Those marks are in no way a knock on the three-time Super Bowl MVP (XXXVI, XXXVIII and XLIX). In fact, in the 2016 regular season, Brady earned the highest grade ever for a quarterback in the PFF era, at 99.5. The QB behind him? Atlanta's Matt Ryan.

Despite missing four games while serving a suspension this season, Brady was simply the most dominant passer in the league this year. The Patriots' quarterback took home PFF's Best Player, Offensive Player of the Year and Best Passer awards for the the 2016 season. 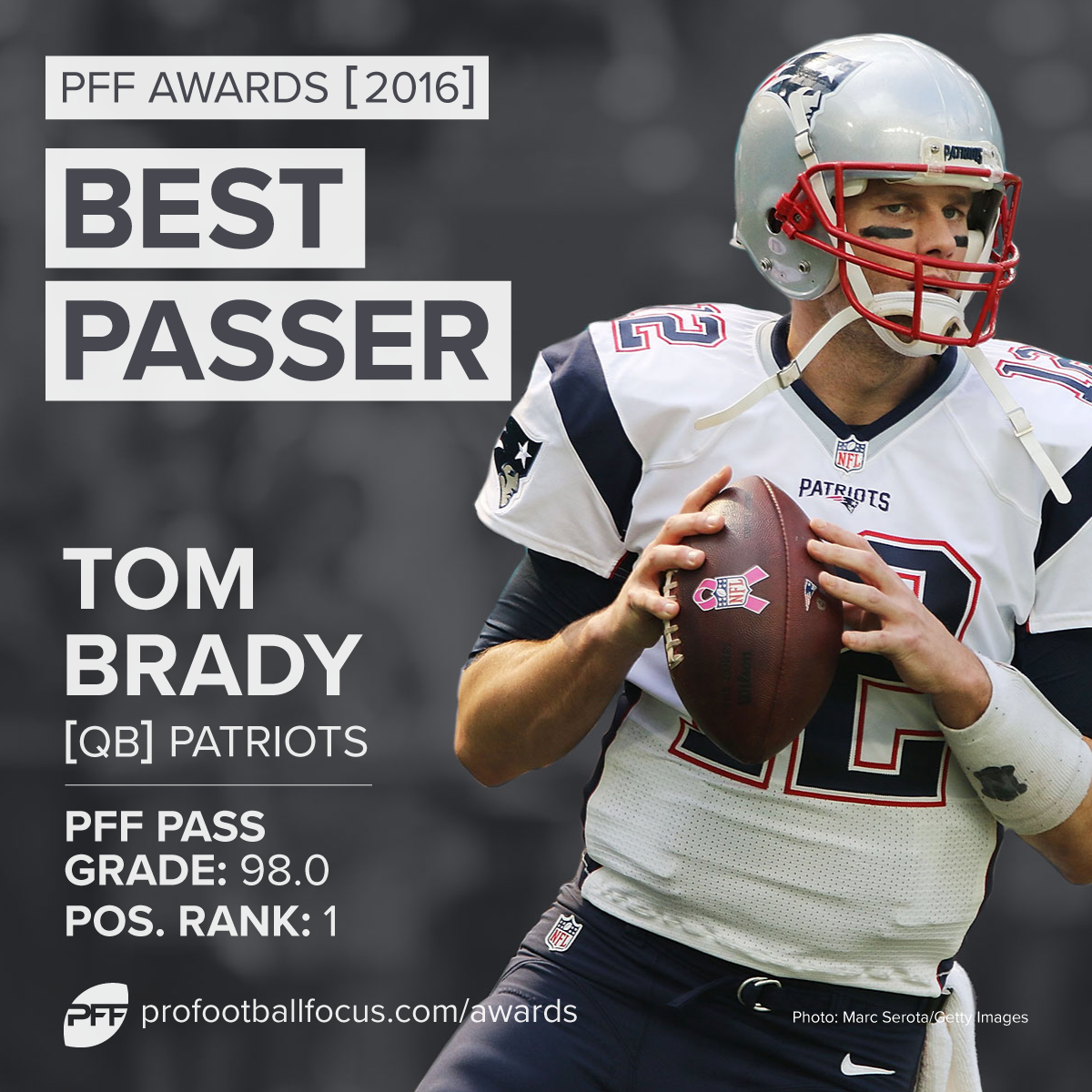 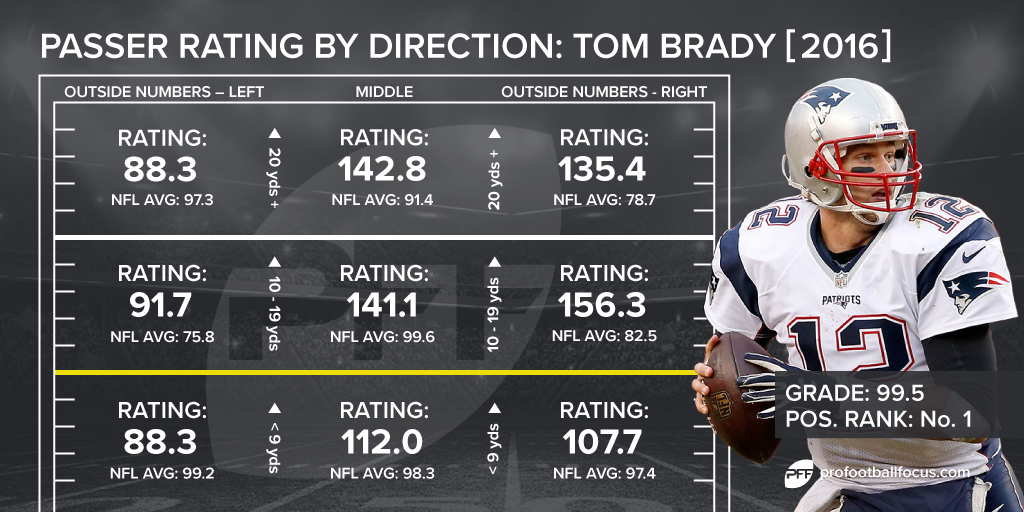 On the other side of the matchup, Matt Ryan produced the best season of his career, as well. As the likely front-runner for NFL MVP, Ryan was the second-most-accurate QB on downfield passes (throws traveling 20-plus yards from the line of scrimmage) this season, behind only Vikings quarterback Sam Bradford.

Often on the receiving end of Ryan's stellar 2016 campaign was Falcons WR Julio Jones, who earned the highest grade among all NFL wide receivers this season. 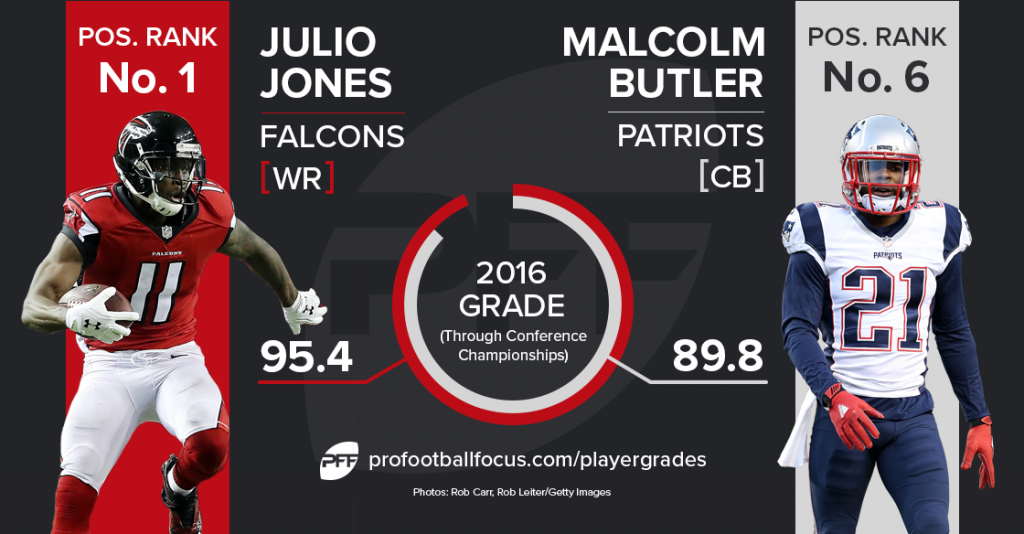 Jones led the league in yards per route run (YPRR) this season, recording 1,656 receiving yards (playoffs included) despite missing time due to injury. Worth noting, as well, is the fact that his teammate, WR Taylor Gabriel, ranked third in YPRR this season, at 2.41. 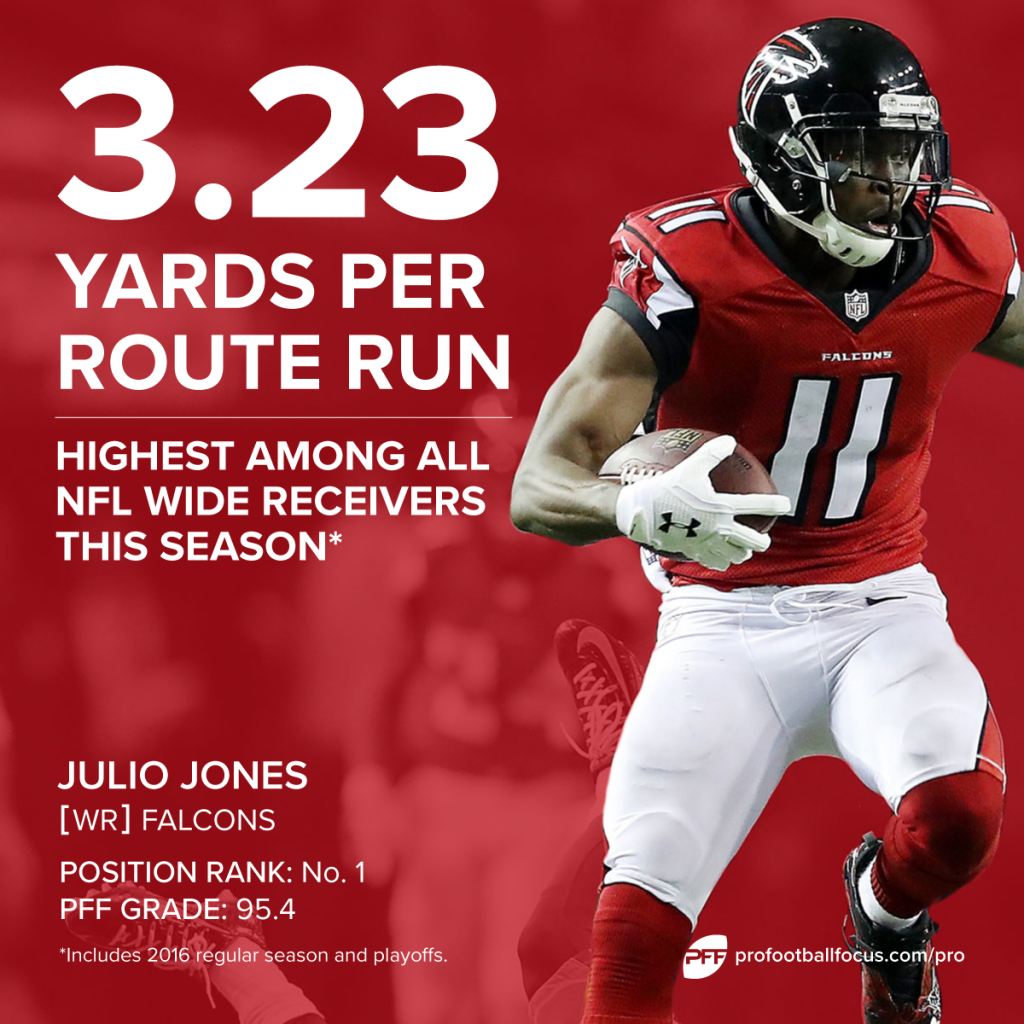 In the Patriots' receiving corps, Chris Hogan has impressed throughout the postseason thus far, earning PFF game grades of 81.5 (versus Houston) and 80.1 (versus Pittsburgh). 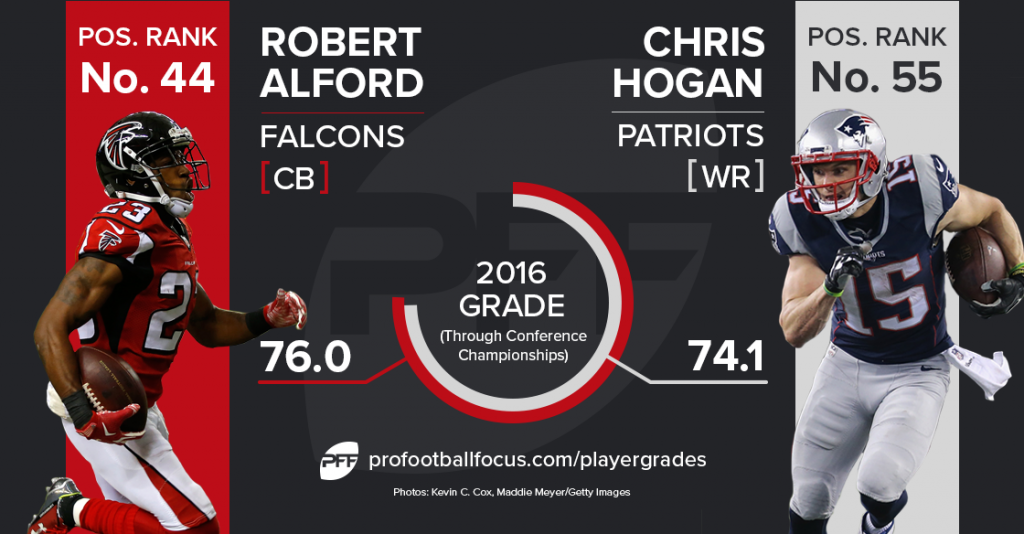 Moving into the trenches, 2016 free-agent acquisition Alex Mack (whose injury is worth monitoring up to kickoff) has proven to be a wise pickup for the Falcons this year, earning the No. 3 grade among all NFL centers. Soon-to-be 2017 free agent Alan Branch will often match up against Mack in the Super Bowl as he attempts to wreck the Falcons' run game. 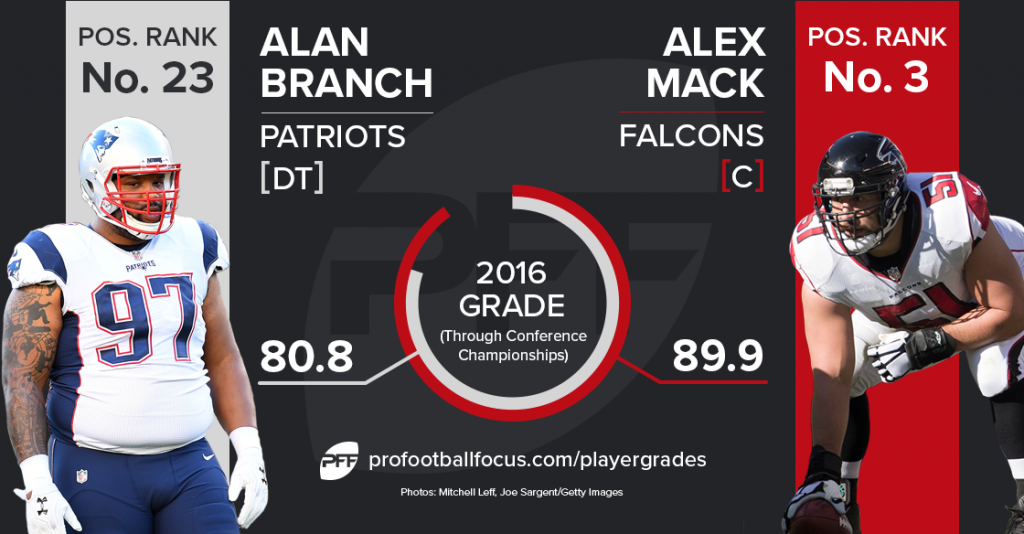 Mack anchors what has been the league's best run-blocking unit this season in terms of PFF grades. For the regular season, the Falcons' front-five ranked as the league's sixth-best offensive line overall. 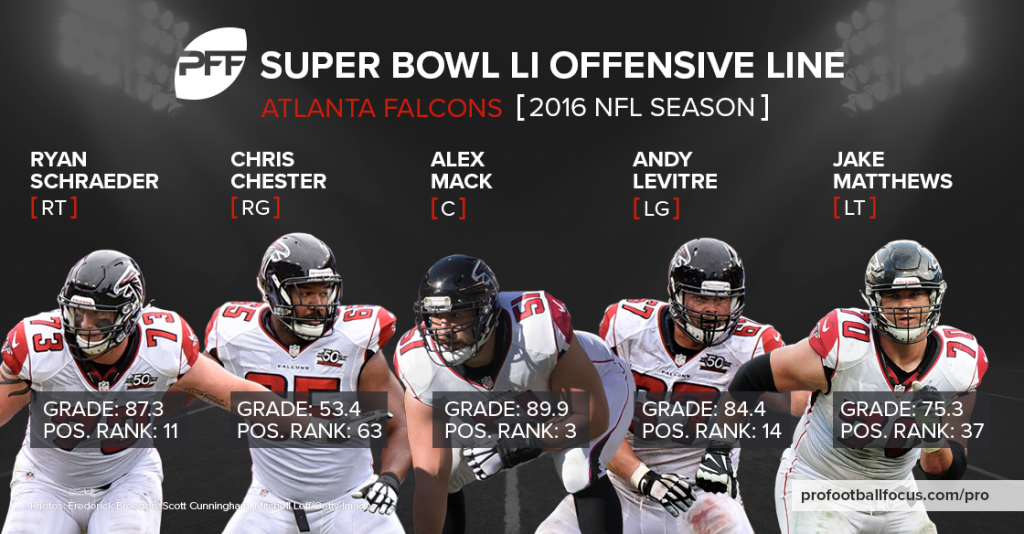 On defense for Atlanta, the NFL's sack leader this season will attempt to make life difficult for Brady. Vic Beasley will be battling the No. 8 offensive tackle this season, however, in Patriots RT Marcus Cannon. 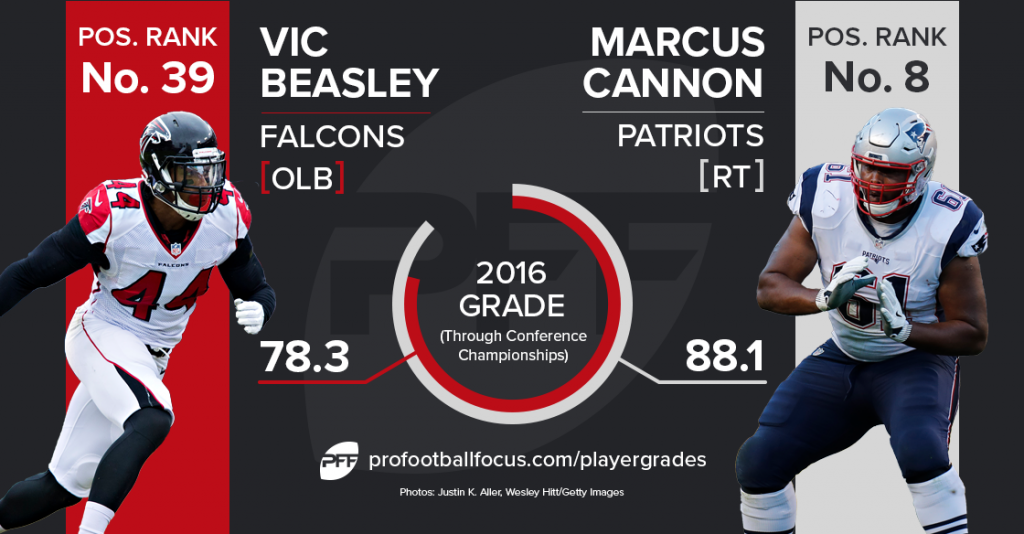 Opposite Cannon, left tackle Nate Solder has produced an impressive campaign, surrendering just 26 QB pressures in the regular season, and only three thus far in the playoffs. 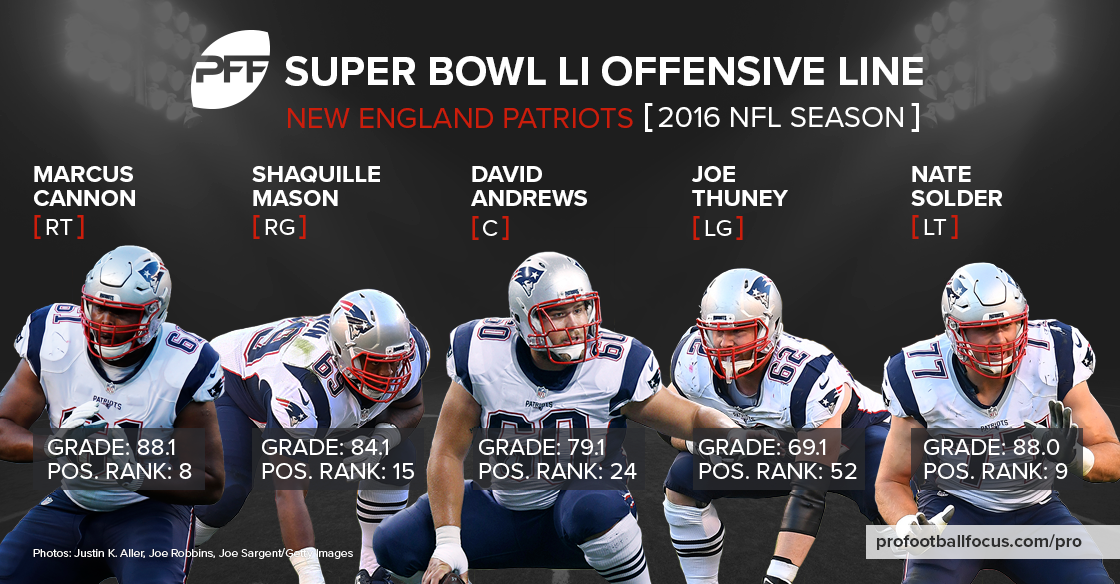 Which team will hoist the Lombardi Trophy on Sunday? Cris Collinsworth and PFF's top analysts make their final pick of the season. 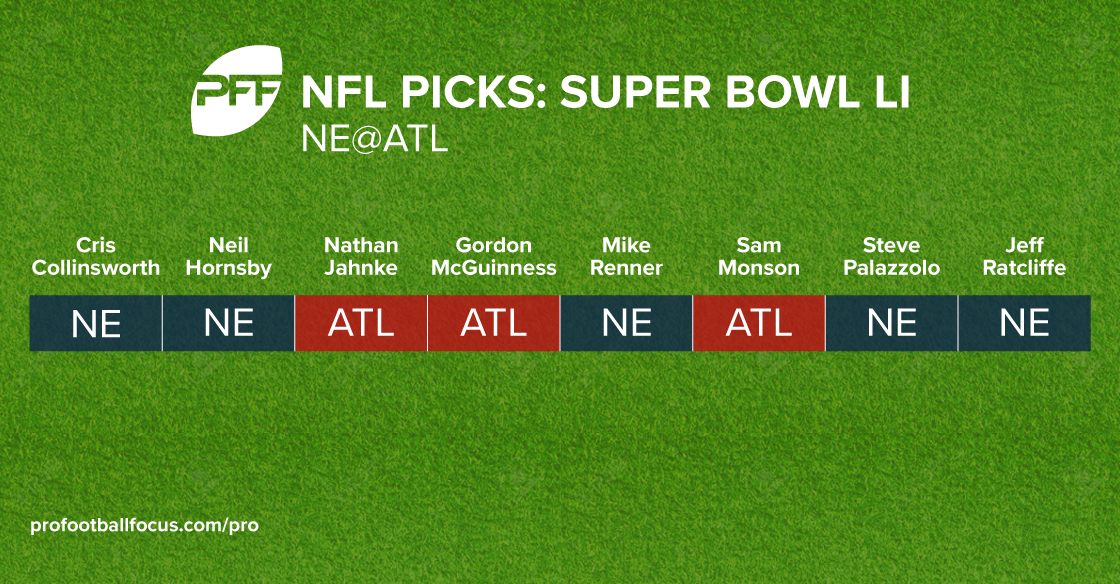