Best player at every position in NFL Week 1

Week 1 of the 2016 NFL season is nearly complete, and PFF's grades for every player to take a snap are in the books. Here are the top performances over the opening week at every position: 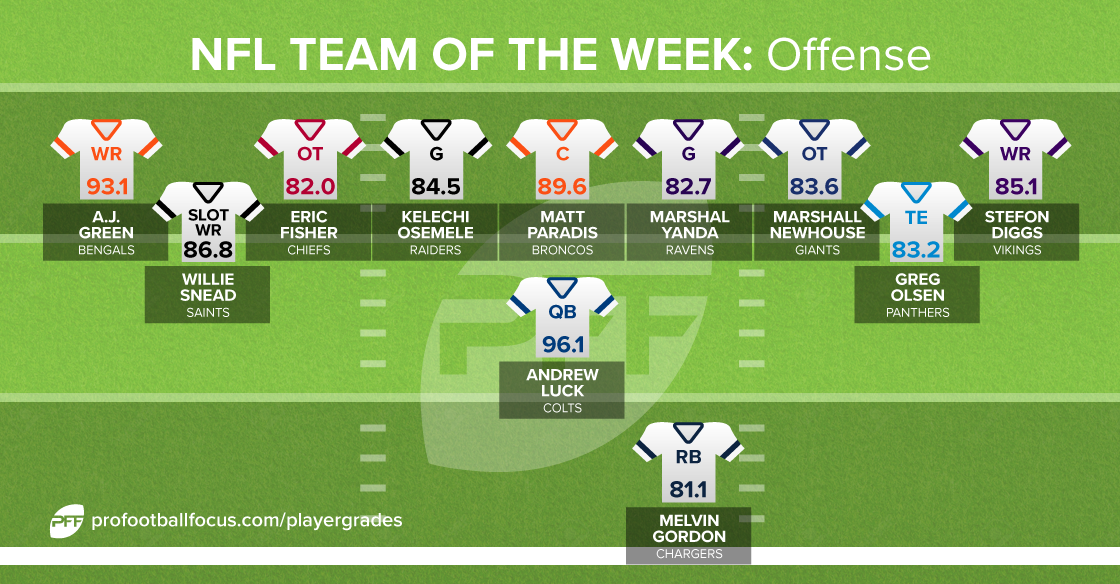 If anybody was worried by the play of Andrew Luck in 2015, he offered arguably the best performance of his career Sunday to show that is all in the past. On deep passes alone, Luck hit on five-of-11 attempts for 167 yards and a touchdown.

Another player out to prove he is better than his 2015 performance suggest, Gordon carried 14 times for 57 yards (4.1 per attempt), but gained 2.7 per attempt after contact, breaking four tackles and scoring twice.

Green might have dismantled Revis Island once and for all. He caught 12 of the 13 passes sent his way for 180 yards and a score, and while not all of those receptions came against Revis, he did catch the ball every time he was targeted with the Jets' star corner in coverage (eight times).

The Vikings offense wasn’t exactly firing on all cylinders, but Diggs caught seven of the eight passes thrown his way for 103 yards, and quarterback Shaun Hill had a passer rating of 118.8 when targeting him.

Even what could have been a critical fumble doesn’t keep Snead out of this team, thanks to catching all nine passes thrown his way for 172 yards and a touchdown. Snead was open all day against Oakland, and gained 51 of his yards after the catch.

Going back to opening night, Olsen remains one of Carolina’s biggest weapons, catching seven of the nine passes thrown his way and holding his own when it came to blocking, something that couldn’t often be said in 2015.

Don’t look now, but Fisher is quietly becoming a pretty good left tackle. He allowed just three total pressures in his 71 snaps versus the Chargers, and graded well against the run and on screens into the bargain.

Osemele looked like a very sound investment in his first action for the Raiders, surrendering just one pressure over 73 snaps, run-blocking well, and even kicking out to left tackle when injuries forced re-shuffles along the line.

One of the most monstrous performances we have seen from a center, Paradis had a perfect game in pass protection for Denver against a tough Carolina front, and was also dominant in the run game.

Against the Bills, Yanda picks up right where he left off as the best guard in the NFL. He didn’t allow a single pressure, run-blocked well, and the only black mark against him was a pair of penalties.

Maybe the most unlikely name to make the team of the week, it seems that all the Giants needed for Newhouse to dominate at RT was to face the Dallas pass-rush. Newhouse gave up just one hurry and run blocked well. 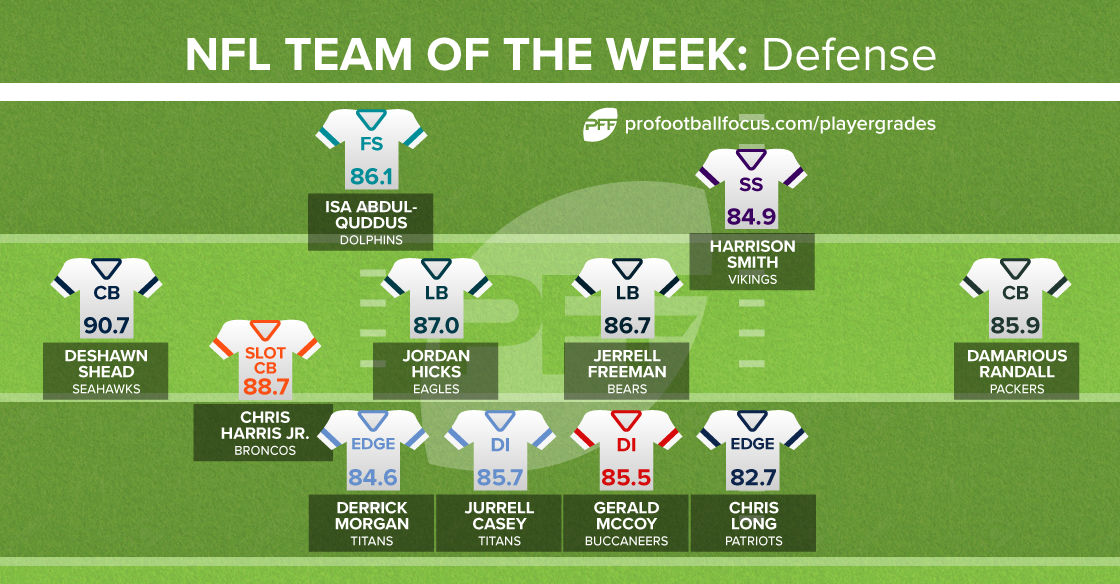 No sacks for Morgan against the Vikings, but four hurries, a defensive stop and some good work in the run game squeezing lanes and making life difficult for blockers on the O-line earns him a spot on the team of the week.

Morgan is joined by teammate Casey, who also failed to register a sack, but notched two hits and three hurries to go along with three defensive stops in the run game.

Gerald McCoy was back to his best against the Falcons, notching a sack and a hurry as a pass-rusher, but also batting down two key passes by getting himself in throwing lanes and disrupting the play even when he couldn’t get home with his rush.

Two sacks in his debut for New England suggest that Long still has plenty of pass-rush left in the tank. He added a hurry to those sacks and even showed up in coverage.

Hicks was thrown at three times, allowing just one catch for two yards, and breaking up one of the incompletions. He made five solo tackles, three of which were defensive stops.

Only Kwon Alexander (15) posted more solo tackles among LBs this week than Freeman’s 13 according to PFF’s tally, and Freeman actually added four assists to Alexander’s one to take the lead overall. Eight of those tackles were defensive stops, as he showed the kind of work rate that the Bears craved this offseason.

When a cornerback comes out of a game with 53 snaps of action having allowed just 3 receiving yards, he has had a pretty good game. That’s exactly what Shead managed, breaking up one pass, laying a hit on Miami's Arian Foster to break up another, and making a nice tackle for no gain on a receiver screen.

Randall was targeted six times against the Jaguars but allowed just two catches for 13 yards, breaking up one pass and being in close attendance on multiple others.

Harris did give up a touchdown to Carolina WR Kelvin Benjamin, but he was in close coverage at the time and just lost the battle at the catch point. Outside of that negative, he intercepted a pass, broke up another key one late in the game, and allowed a total of just 14 yards to the Panthers, all of which came on the touchdown score.

Abdul Quddus had good grades in both the run game and coverage versus Seattle, notching an interception as well as two defensive stops. He also broke up a pass intended for Seahawks WR Doug Baldwin in the third quarter.

One of the best safeties in the game, Harrison Smith had another good performance to open the season. He had an interception nullified by penalty, but also made a couple of nice plays in the run game, beating rookie Titans receiver Tajae Sharpe inside to make a tackle for loss, as well as recording a key third-down stop.

Other players might have had a higher average than Kern, but his directional punting was excellent against the Vikings, and his five punts were returned for just 10 yards.

Two-for-two from over 50 yards, Bailey hit on all four of his kicks and averaged 71.5 yards on his kickoffs, too.

This wasn’t a great week for returners, but Patterson showed why he is one of the league’s most dangerous return men, getting one shot to take a kick back—and gaining 61 yards.

Get access to grades for every player, complete with positional rankings, in our Player Grades tool.