FOXBOROUGH, MA - SEPTEMBER 24: New England Patriots Tom Brady signals that they are going for a two-point conversion as teammate Brandin Cooks holds up the ball after his game-winning reception against the Houston Texans during the fourth quarter of a game at Gillette Stadium in Foxborough, Mass., Sept. 24, 2017. (Photo by Matthew J. Lee/The Boston Globe via Getty Images)

Below is the fourth installment of our weekly PFFELO rankings. Like all ELO systems, PFFELO is an iterative system that updates each team’s rating after each game based on two things: how well they played against their opponent and how well they were expected to play against their opponent. The PFFELO rating system measures the former using our unique offensive, defensive and special teams grades, while the latter is determined by the PFFELO ratings leading up to the game and where the game is played.

The Falcons beat what has amounted to a decent Lions team despite losing the turnover battle 3-0 and allowing a defensive touchdown. With two close road wins (both of which could have easily been losses) behind them, the Falcons appear poised to avoid the Super Bowl loser’s hangover. Having the league’s highest-graded offense and third-highest graded defense helps their cause. With two winnable games sandwiching a bye week, there’s a real chance they’ll be 5-0 come their Super Bowl rematch with the Patriots in Week 7.

Like the Falcons, the Patriots survived a scare in Week 2, needing the second-best quarterback performance of the week (with an overall grade of 87.3) from Tom Brady to overcome an upstart Houston team at home. The league’s 24th-highest graded defense will likely make things more difficult for Brady than they were a season ago, as cornerbacks Malcolm Butler (117.6 passer rating), Eric Rowe (116.7) and Jonathan Jones (110.7) have all struggled in coverage opposite newcomer Stephon Gilmore (54.4) through three weeks.

After winning on the road in Los Angeles, the Chiefs are in sole possession of first place in the AFC West, a division in which they have not lost since Week 2 of 2015. The return of Justin Houston (the league’s most productive run-stopping 3-4 outside linebacker) has certainly helped Kansas City, but it’s Kareem Hunt (the league’s most-elusive runner) that has this team thinking they are a Super Bowl contender. With two winnable games upcoming, it’s possible they will enter their stretch against Pittsburgh, Oakland, Denver and Dallas with a record of 5-0.

The Steelers seem to have a game like last Sunday in Chicago every year. The troubling trend is that Ben Roethlisberger (75.0 overall grade, 19th among quarterbacks) appears to be continuing his mediocre play from a season ago, struggling with accuracy (he’s just 22nd in adjusted completion percentage) and downfield passing (he has only a 35.9 passer rating on 16 passes over 20 yards downfield). With Le’Veon Bell (45.3)’s slow start, what began as a promising year for the Steelers appears less so through three weeks.

The Cowboys rebounded nicely on Monday night, taking advantage of poor offensive line play on the part of Cardinals to generate pressure on 24 of Carson Palmer’s 55 dropbacks (43.6 percent). Demarcus Lawrence (13 total pressures on Monday) is carrying this defense, leading all 4-3 defensive ends with an absurd 22.6 pass-rushing productivity. If the offense can show like they did in the second half in Glendale, maybe rumors of the Cowboys’ regression were exaggerated.

Another top team that survived a scare on Sunday, the Packers overcame a 21-7 deficit to beat a winless Bengals team despite their depleted offensive line surrendering pressure on 28 of Aaron Rodgers’ 51 dropbacks (54.9 percent). As they get healthier up front and in the receiving corps, look for the Packers’ offense (despite scoring fewer than 28 points in each game so far) to be up to the task this week against the Bears. The subsequent three weeks (against Dallas, Minnesota and New Orleans) are another story, however, given their 20th-highest graded defense on the other side of the ledger.

The biggest risers this week come from the nation’s capital, where Washington has leveraged the outrageous play of running back Chris Thompson to put up 27 points in consecutive weeks. Thompson has only played 57 snaps during that time, but he has averaged an outrageous 4.97 yards per route run and another 10.5 yards per carry. If Washington can get Terrelle Pryor (only 1.18 yards per route run so far) going, look out.

Denver’s defense traveled fine a week ago, allowing fewer than 275 yards against the Bills. However, Trevor Siemian and Denver’s offense was unable to continue their strong play, turning the ball over twice and averaging fewer than 6.0 yards per pass play. Additionally, Siemian couldn’t get out of his own way, as he was responsible for four of the 18 pressures he faced in 46 dropbacks. He’ll have to improve at home this week against an Oakland defense grading out as the league’s seventh-best, as the loser of that game has a real chance of falling two games out of first in the stout AFC West at the quarter mark of the season.

The Raiders lost a truly perplexing game last Sunday night in Washington, with quarterback Derek Carr (with a 39.8 game grade) unable to get anything going behind an offensive line that kept him clean on 25 of his 36 dropbacks (69.4 percent). While three of his 24 passing attempts when clean were dropped, he was only able to generate 96 yards on the 21 throws that weren’t, allowing Washington to keep Oakland at arm’s length the entire night. Things do not get easier Sunday in Denver, but if they want to challenge Kansas City for AFC West supremacy, their offense will have to turn it around and deliver on the road.

Even in falling five spots, the Panthers are probably overrated by this system through three weeks. After holding their first two opponents in check, their defense fell apart at home against the Saints last Sunday, with each of their five starting defensive backs surrendering a 90.0 or better passer rating into their coverage. Their defensive front generated only five pressures all afternoon, despite facing a New Orleans offensive line missing key pieces on both the left and right side. With Cam Newton (46.7 season grade) continuing to play like one of the worst quarterbacks in the league, look for the Panthers to continue to fall in this rating system. 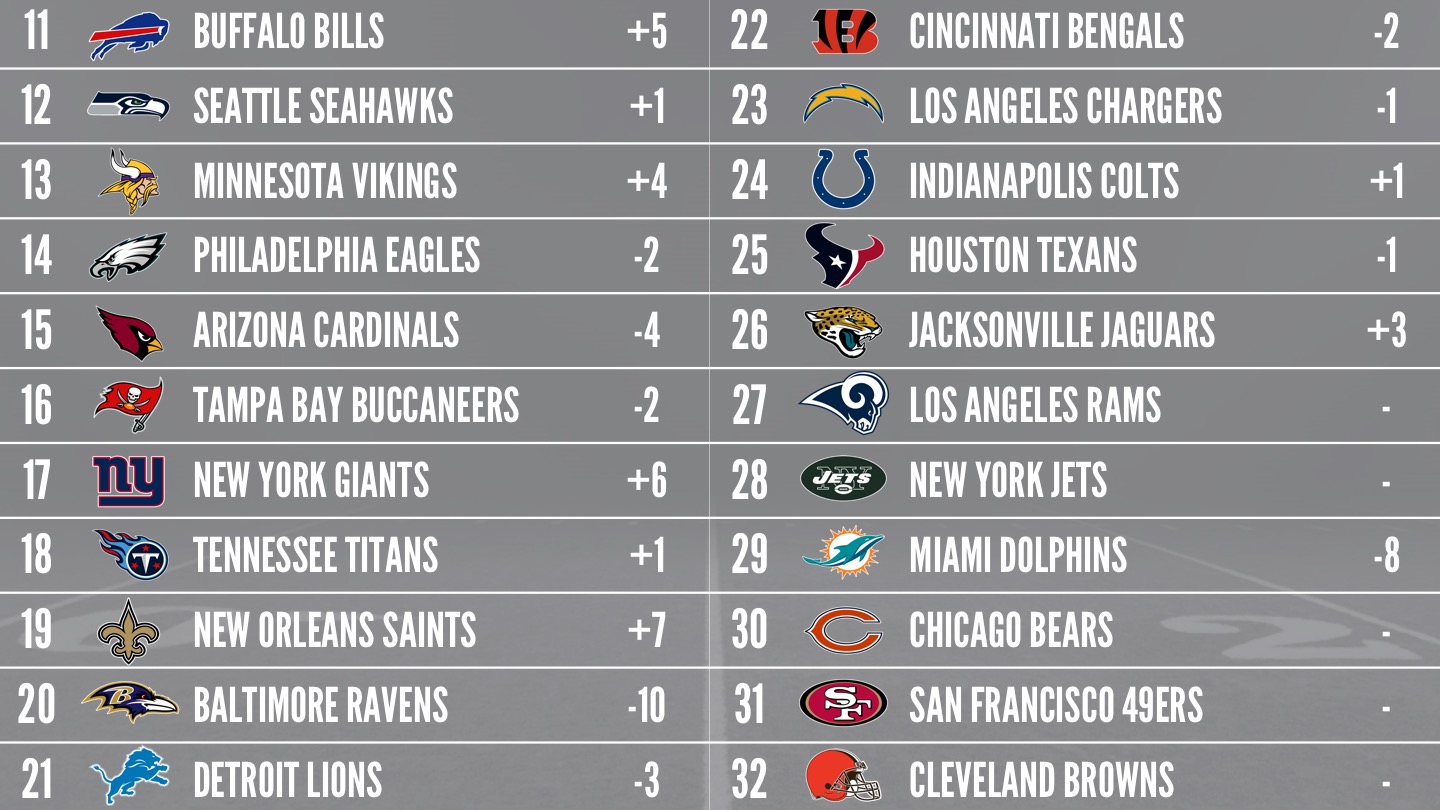