Armed with plenty of draft capital, the defending Super Bowl champion New England Patriots had a chance to add to a strong roster while adding crucial short- and long-term pieces. The wide receiver corps is one of the weakest in the league on paper, but New England spent a first-round pick on a wideout for the first time in the Bill Belichick era, securing Arizona State’s N’Keal Harry with the 32nd overall pick. Harry was a second-round pick on the PFF draft board, as there are concerns about his ability to consistently separate from defenders at the next level, but he is strong at the catch point and flashed impressive after-the-catch ability throughout his college career. 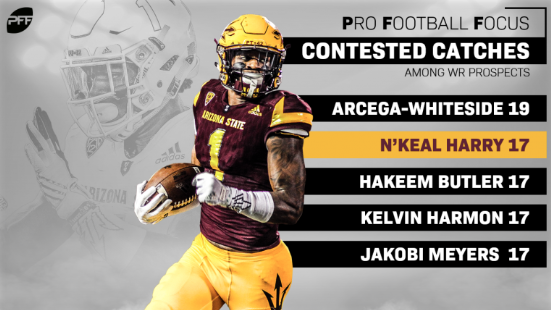 In New England’s offense, Harry is a weapon in the back-shoulder game, and he can be efficient on slants and in the red zone. If the Patriots decide to get more creative, Harry could possibly steal some of the “Gronkowski” targets over the middle of the field, acting as more of a big slot receiver who can run the seam and perhaps some of the “over” routes that were a Rob Gronkowski staple and a go-to concept for quarterback Tom Brady. If there’s an example of a potential Harry-like route tree, it’s the 2014 version of Brandon LaFell, who became a key contributor for the Patriots, complementing the likes of Julian Edelman and Gronkowski by running the outside route tree in more of a possession-like role, especially against man coverage. Harry has a chance to make an immediate impact given the lack of proven options on the New England offense.

In the second round, the Patriots went with Vanderbilt cornerback Joejuan Williams, a monster on the outside standing at nearly 6-foot-4, 211 pounds. Williams had his ups and downs in college, finishing with a solid 79.5 coverage grade in 2018 to go with four interceptions and 11 pass breakups. The Patriots love to play matchups on defense, and Williams provides an option to combat bigger wide receivers or perhaps even tight ends (hello Travis Kelce?). Third-round edge defender Chase Winovich could prove to be the steal of the class for New England, as he finished with 90.0-plus overall PFF grades in each of the last two seasons, and he can get after the quarterback. With former fourth-round star Trey Flowers moving on the Detroit, New England may have found a replacement with a similar mid-round selection. 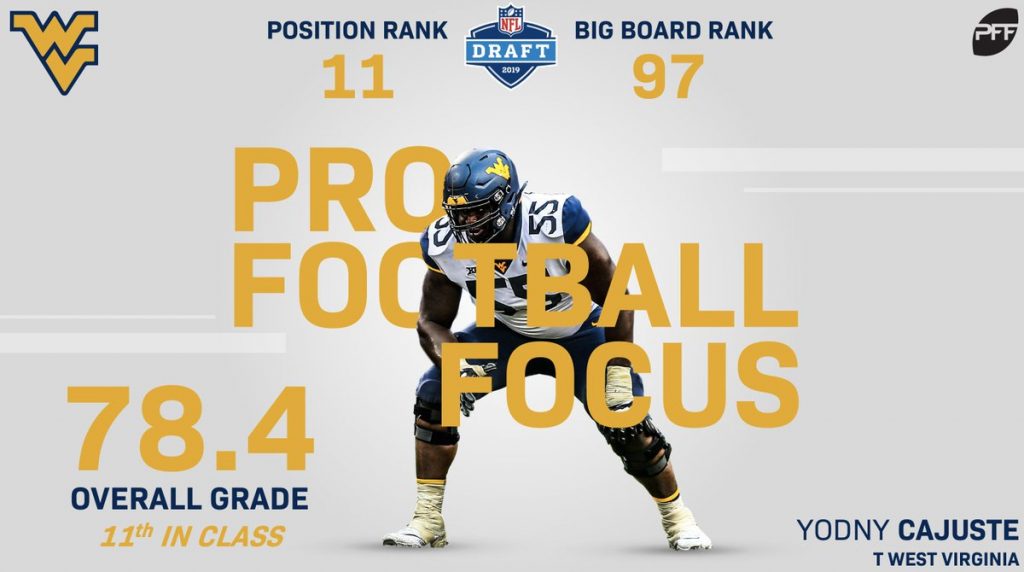 One of the long-term stories in this draft is the two offensive line picks, OT Yodny Cajuste from West Virginia and G Hjalte Froholdt from Arkansas. Both players have second-round ability according to the PFF draft board with Cajuste dropping a bit due to an offseason injury. He still fits as a developmental offensive tackle, as he’s a smooth athlete who allowed only 25 pressures over the last two seasons. Froholdt is one of the better pass-protecting guards in the draft, allowing only five pressures last season, and he handled the draft's No. 3 overall pick, Quinnen Williams, as well as any guard in the nation last season. With left guard Joe Thuney in a contract year, the Patriots may have a path for Froholdt to start in 2020 if they’re unwilling to break the bank for both Thuney and fellow guard, Shaq Mason who is already locked up.

Of course, any time the Patriots select a quarterback, it’s a big story, and they spent a fourth-round selection on Auburn’s Jarrett Stidham. It was an odd career for Stidham, who started out with a fantastic true freshman season at Baylor, grading at 89.3 overall, before transferring to Auburn and posting middling grades of 71.5 and 62.3 over the last two years. Stidham certainly has the zip to drive the ball to all levels of the field, but his short and intermediate accuracy is lacking, and he must speed up his processing in the pocket. All that said, he was selected in the proper range and certainly worth a look in the middle rounds.

Finally, the Patriots love adding a plethora of options to the running back room, and they added another potential weapon in Alabama’s Damien Harris. He has a solid all-around game and averaged an impressive 3.7 yards after contact per rush during his college career. The other player to keep an eye on is former top recruit, Byron Cowart. He didn’t grade well at either Auburn or Maryland during his college career, but the oversized edge defender may have a future as an interior pass-rusher at the next level.

Overall, the Patriots’ draft hit on a number of valuable positions and potential part-time roles. They also focused on the perimeter with their first two picks while adding a potential top-notch pass-rusher in the third round, a strategy that is the opposite of how many other teams approached this draft but perhaps a great way of giving the most valuable positions their proper due. The mid-round picks may be the story of the draft, as Winovich and the offensive linemen have a chance to start in the coming years, while Stidham’s development will determine how the Patriots approach the quarterback position as Brady heads into his 42-year-old season.