Week 6's slate of games came and went, with plenty of standout defensive performances to feature. We saw a shutout in Nashville, a near-shutout in London, and a game-winning pick-six that highlighted eight contests that were decided by one score or less.

Raiders quarterback Derek Carr was seemingly under pressure on every dropback throughout the afternoon in London, and Frank Clark was the main culprit. With his teammates Quinton Jefferson and Jarran Reed also doing a good job of pushing the pocket, Clark caused headaches for Raiders rookie left tackle Kolton Miller to the tune of two sacks, one hit and one hurry coming off the edge, displaying an impressive mix of speed and power.

When Buffalo has been competitive this season, it’s usually because the defense has played well. On Sunday, they kept the Houston offense in check, with the rotation of Jerry Hughes, Lorenzo Alexander, and Trent Murphy again proving to be a potent combination off the edges. Hughes stood out the most, providing a healthy nine pressures on the day (six hurries, two hits, and one sack).

Despite the loss, Ngakoue continues his ascent to becoming one of the top edge defenders in the league. You won’t be finding any of his teammates on this list this week, but Ngakoue had an impact playing both the run and pass on Sunday. He had four total stops (solo defensive tackles made which constitute an offensive failure) including two sacks and two hurries rushing the passer. 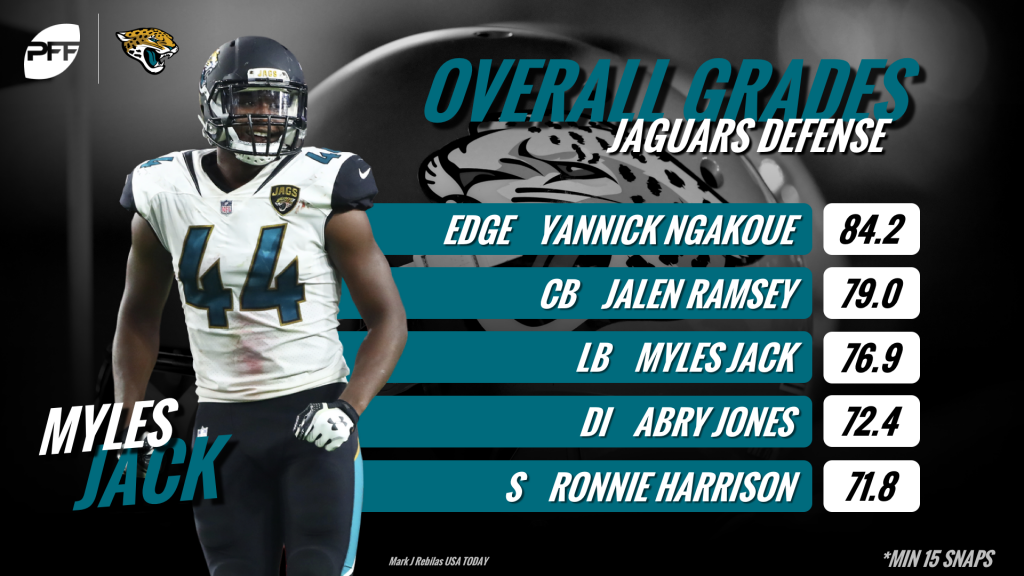 On the other hand, Donald solidified his standing as the preeminent interior defender in the NFL. In Denver, Donald finished with a ridiculous 11 total pressures (one sack and ten hurries), giving him a pass rushing productivity of 21.3. He added a stop in the run game, further highlighting his presence in the Denver backfield all afternoon.

Hicks entered the week with the third-highest grade amongst interior defenders. He shan’t be going anywhere after flat-out dominating while defending the run on Sunday. He finished with six solo tackles, all of them considered defensive stops against the run. That earned him a 23.1% run stop percentage on his 26 run snaps. 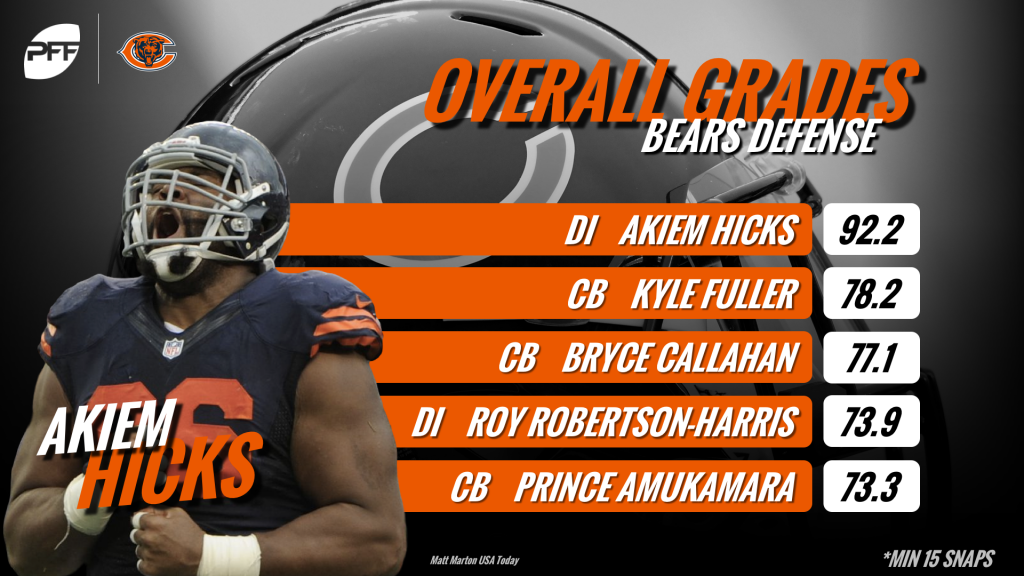 Barr showed well in all phases this weekend. He was effective rushing the passer, he was effective in coverage, and he was effective against the run. He accumulated two hurries and a batted pass as a blitzer, and added one defensive stop while only yielding one catch for three yards in his primary coverage.

Brown has consistently been one of the league’s top run defenders, acting as a tackling machine while displaying impressive range all over the field. That’s continued in 2018 and in particular this weekend against the Panthers with Brown completely bottling up Christian McCaffrey and Cam Newton on the ground. Brown added two defensive stops on the day, while also holding up well in coverage, only allowing two of three targets to be caught for ten yards, equating to an impressive 0.34 yards per coverage snap.

A PFF favorite coming out of college, King is re-approaching the form reached during his impressive rookie season in 2017. On Sunday, he allowed a passer rating of only 27.3 in his coverage (5 of 9 targets caught for 40 yards). He had two second-half interceptions of Browns quarterback Baker Mayfield. For good measure, King II even added a quarterback hit as a result of a blitz. 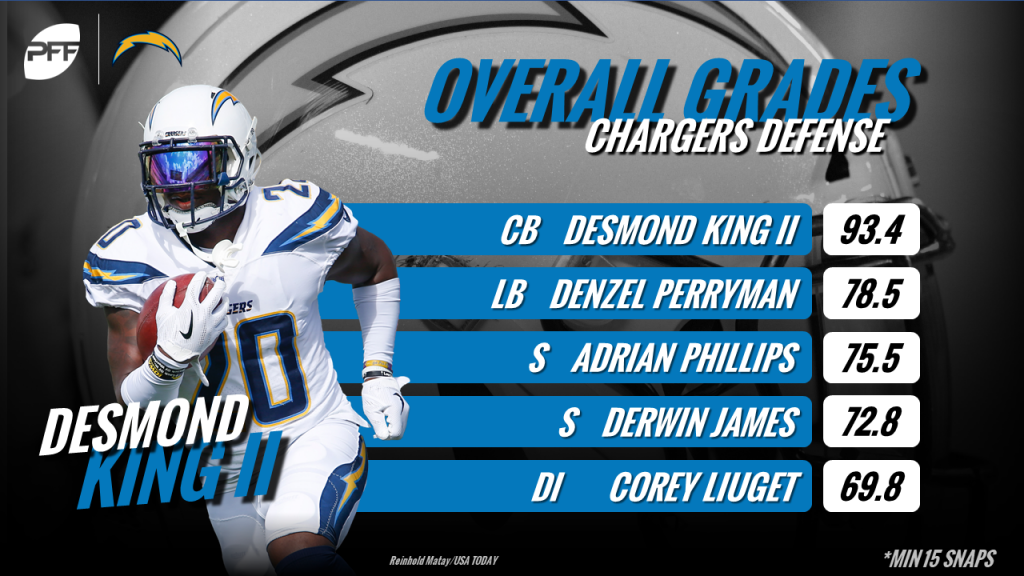 Joseph surely produced the most impactful single defensive play on the afternoon, with his 28-yard pick-six interception return coming with 1:23 left in the game to bring the Texans to their final margin of 20-13 over Buffalo. The veteran was solid all day, allowing only four of ten targets to be caught for a passer rating of 17.1. He didn’t miss a tackle on the day and produced three stops in the passing game and one defending the run.

Baker has truly been used as a defensive chess piece all season, and on Sunday he lined up as a box safety all throughout the afternoon while making most of his impact against the run. Two of his nine tackles were for a loss, and he racked up six total defensive stops. His scoop and score fumble return touchdown was an impressive feat of athleticism and tied the game in the second quarter. He’s tied with Jamal Adams amongst defensive backs with 12 run stops on the season.