NASHVILLE, TN - SEPTEMBER 11: Linval Joseph #98 of the Minnesota Vikings celebrates after sacking Marcus Mariota #8 of the Tennessee Titans at Nissan Stadium on September 11, 2016 in Nashville, Tennessee. The Vikings defeated the Titans 25-16. (Photo by Wesley Hitt/Getty Images)

With 13-of-14 Week 6 games in the books, it’s time to turn another PFF Elite stat. This week, we’re going to focus on run defense, and the run stop percentages posted by the NFL's most productive interior defenders, and edge defenders.

PFF's “Run Stop Percentage” figure is the total number of stops (solo tackles that result in a ‘win' for the defense) a player made, divided by the number of snaps played on run defense, which gives us a clear measure of a player’s effectiveness against the run on a per snap basis, that looks far beyond just the number of tackles made. 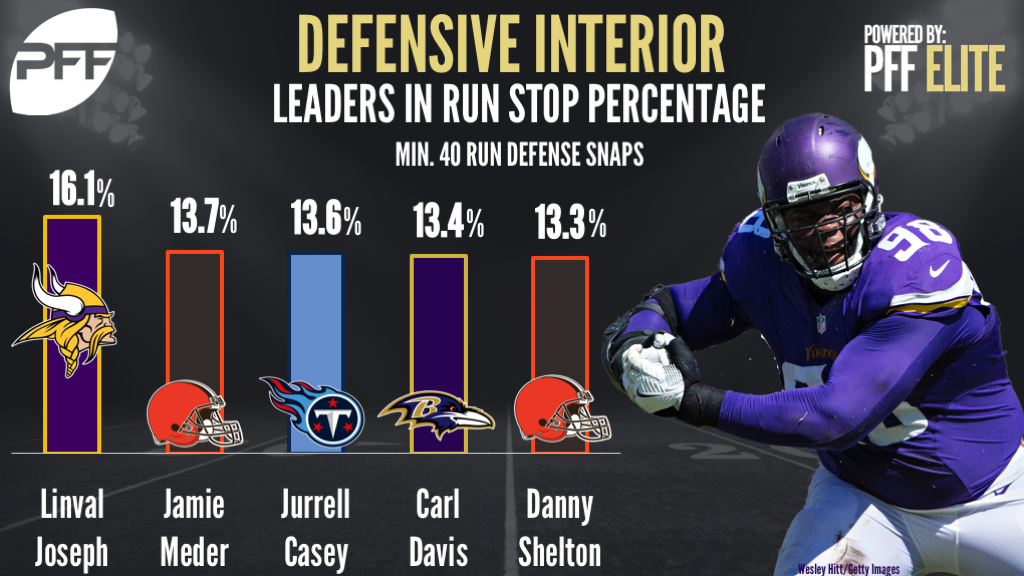 The Minnesota Vikings signed Joseph to a four-year, $50M extension in the offseason and so far this year, the eighth-year defensive tackle is proving to be worth every penny. An immovable force in the middle of Mike Zimmer’s 4-3 based defense, Joseph has played 112 snaps this season and produced an astonishing 18 stops, tied for the most among the league’s interior defensive linemen.

Well known among Browns’ fans for blocking the potentially-game-tying field goal in the team's victory over the Chargers a year ago, Meder has found a home as a rotational player on a Browns’ line that has produced the second-most run stops (53) among defensive lines this year. He’s played 51 run defense snaps, accounted for seven stops, and ranks second among interior linemen with a run stop percentage of 13.7 percent.

Through five games of the 2017 season, Casey has gotten off to a flying start against the run. To put it into perspective, Casey ended the 2016 season with 19 stops on 231 run defense snaps, which was good for fifth among 3-4 defensive ends. After just five games this year, Casey already has 12 stops on 88 run defense snaps and he could very possibly be on his way to beating his career-high (38 run stops). Casey is currently ranked first among 3-4 defensive ends with a run stop percentage of 13.6 percent and could extend his lead with a solid performance on Monday Night Football.

No team has produced more stops against the run this year than the Baltimore Ravens (115), and that has a lot to do with the emergence of a talented defensive line. With star defensive tackle Brandon Williams missing time through injury, third-year defensive tackle Carl Davis has stepped up in a big way and produced nine stops on his 67 run defense snaps. Five of those stops came in Week 3 against the Jacksonville Jaguars, three of which were against talented running back Leonard Fournette.

Shelton ended the 2016 season with 39 run stops, the third-most among the league’s interior linemen, and this year, he looks like he’s carrying on from where he left off. Through six games of the 2017 season, Shelton has produced 11 stops on his 83 run defense snaps, with five of those stops coming in Week 3 against the Indianapolis Colts, and another five coming against the Houston Texans in Week 6. If he can find consistency, Shelton has the potential to be one of the most dominant run-stuffing defensive tackles in the NFL. 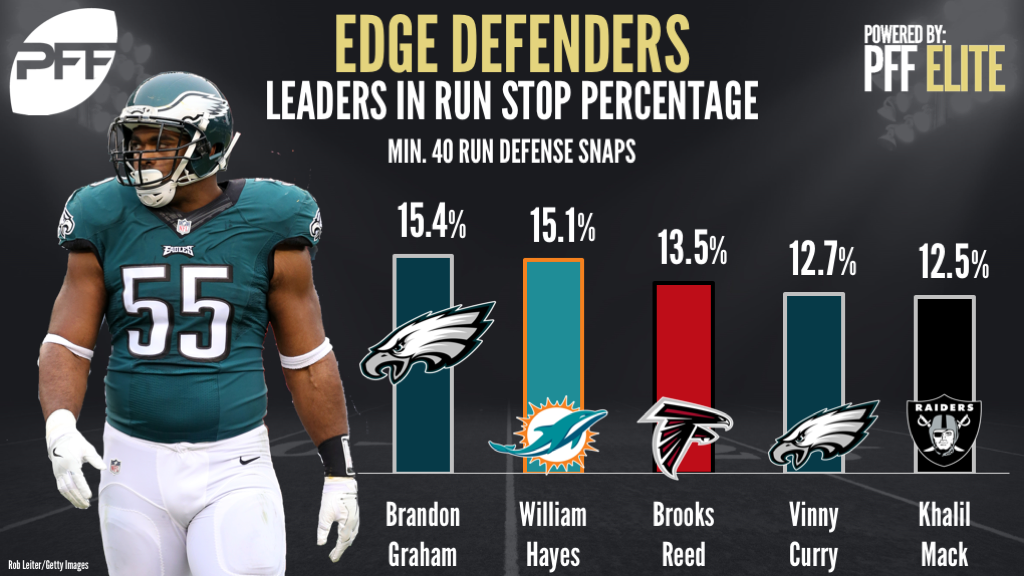 There is much to be said about his pass-rushing prowess, but Brandon Graham is arguably as impressive against the run as he is when rushing the passer. Through six games of the 2017 season, Graham has produced 10 stops on his 65 run defense snaps, and is now up to 43 run stops since last season, second only to Khalil Mack in that span.

After the Dolphins acquired Hayes from the Los Angeles Rams, the tenth-year defensive end said that his primary goal was to help the team with the run defense, and that’s certainly what he’s been doing so far this season. In week 5 and 6 alone, Hayes has tallied six total stops on just 18 run defense snaps, the most among defensive ends in that span of time. In total, Hayes has tallied eight stops on 53 run defense snaps this season.

In his third year with the Falcons, veteran edge-defender Brooks Reed is on pace for a career-year against the run. Through six games, Brooks has played 74 run defense snaps and produced 10 total stops, which ties him for the most among his teammates.

Often the forgotten man on the Eagles defensive line, Curry is making teams notice him this year. Through six games of the 2017 season, he has already tallied eight stops on his 63 run defense snaps, which betters his 2016 total with 10 games still to play.

Six games into his fourth-year as a professional and Khalil Mack is on pace to add yet another elite chapter to an already stellar career. A true all-round edge defender, Mack is not only playing at an elite level in the pass-rush, but against the run as well. He’s played 144 run defense snaps so far this year and produced 24 tackles and 18 stops, both the highest marks among edge defenders. Since he entered the league in 2014, Mack has tallied 126 run stops, the most among edge defenders and the third-most among all defensive players.