Beyond providing data for all 32 NFL teams, PFF also supports network broadcasters with game-preview packets that are used to enhance the in-game experience for fans and viewers. This Cowboys-Texans preview features the same information our broadcast partners use for team research and in-game production.

The Texans need to do a better job of protecting quarterback Deshaun Watson, and there's no better place to start than Sunday night against the Cowboys. Through four games, Watson has been sacked and hit in the pocket a combined 22 times, which is the third-most in the league. 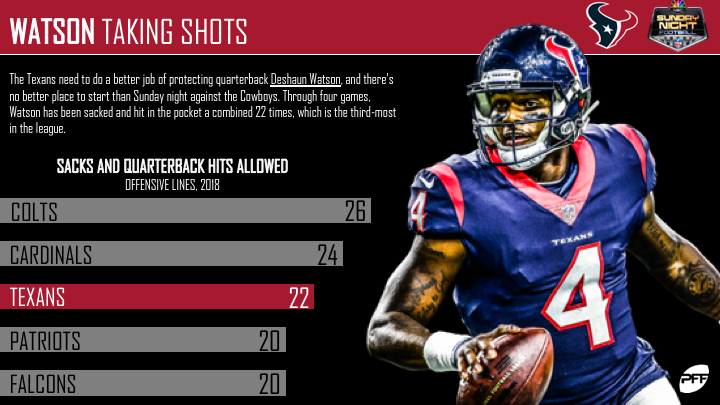 The Texans have one of the best wide receivers in the league in the form of DeAndre Hopkins, but through the first quarter of the season, it's been Will Fuller V who has turned heads. Fuller has generated a passer rating of 155.9 so far this season – the second-best mark among all wide receivers.

When he's 100% healthy, J.J. Watt is arguably the most dominant player in all of football, and while he may not be back to his superhuman best right now, he's still playing at a remarkable level. Through four games, Watt has produced 19 pressures on 146 pass-rushing snaps and has also tallied nine defensive stops against the run. The Cowboys offensive line better be ready for Watt on Sunday night. 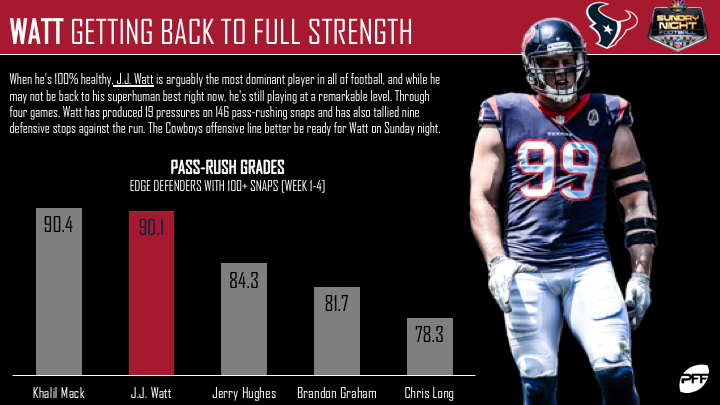 Colvin not quite having the same success

Through four games, Dak Prescott‘s average yards per attempt sits at a lowly 6.6 yards, which is the 27th-lowest mark among quarterbacks. The Cowboys simply need him to take shots downfield more often, and that could start against the Texans on Sunday night. 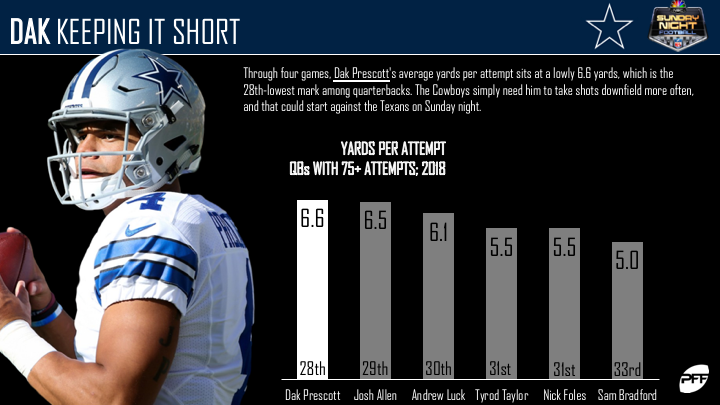 Zeke looking to strike while the iron is hot

Running back Ezekiel Elliot put on a tremendous display against the Lions in Week 4, where he ran for 110 yards after contact and added a further 88 receiving yards from 21 snaps in route. Elliott would no doubt love to follow that up with another strong performance against the Texans.

Byron Jones having a career-best start to the year

After switching from safety to corner over the offseason, Byron Jones has arguably been the best cornerback in the NFL so far this year. He’s been targeted 16 times, allowing only seven catches for 51 yards and a passer rating of just 51.8 – the seventh-best mark among cornerbacks.

Demarcus Lawrence enjoyed a career year in Dallas last year and is showing no sign of slowing down in 2018, where he's already accumulated 20 quarterback pressures, which are tied for the second-most among 4-3 defensive ends. If the Houston offensive line doesn't buckle up, look for Lawrence to have a field day on Sunday night. 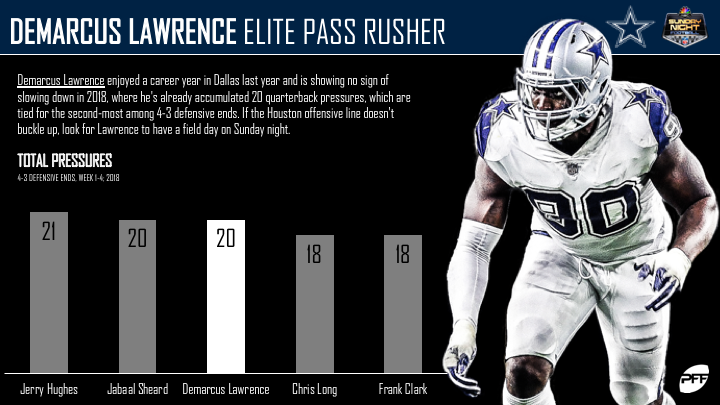 PFF Greenline has projections for the spread, moneyline and over/under of the Cowboys’ matchup with the Texans. Get its picks here.