Beyond providing data for all 32 NFL teams, PFF also supports network broadcasters with game-preview packets that are used to enhance the in-game experience for fans and viewers. This Vikings-Rams preview features the same information our broadcast partners use for team research and in-game production.

Watch out for play action

The Minnesota Vikings will need to be very wary of the Rams offense utilizing play action. Through three weeks, quarterback Jared Goff has used play action on 36.8 percent of his dropbacks, by far the highest rate in the league. 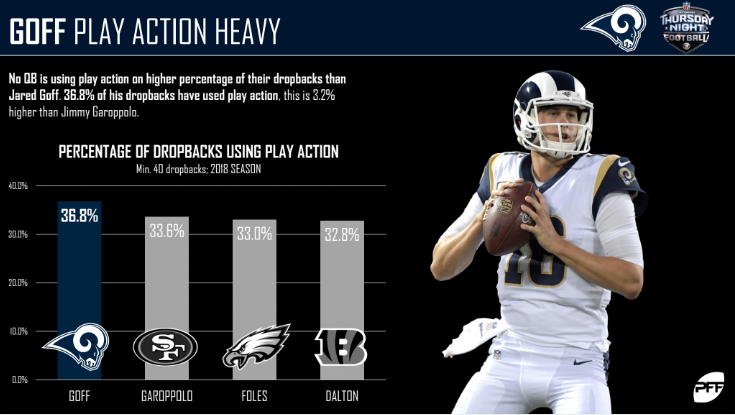 Anchored by veteran tackle Andrew Whitworth, the Rams offensive line has got off to a flying start in 2018. Through three games, they've allowed just 11 quarterback pressures, which is the second-best mark in the league. They'll need to be at their very best against the Vikings and a supremely talented pass-rushing unit. 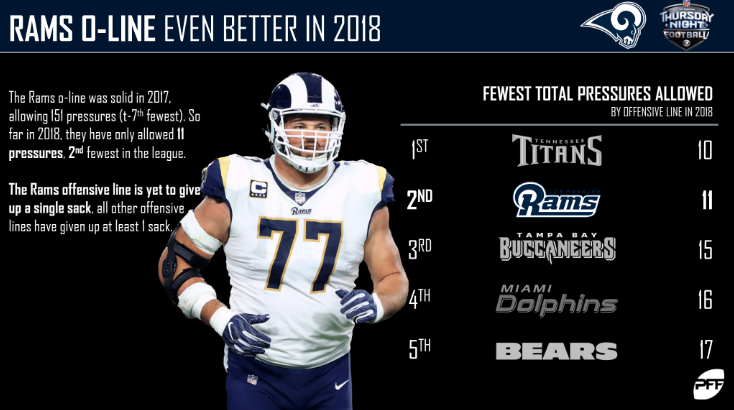 The pass-rushing duo of Aaron Donald and Ndamukong Suh is arguably the best in the league. In their three games together, they've combined for 26 total quarterback pressures, and they're more than likely going to add to that total on Thursday night, as they're set to go up against the league's 27th ranked offensive line in terms of pass-blocking efficiency. 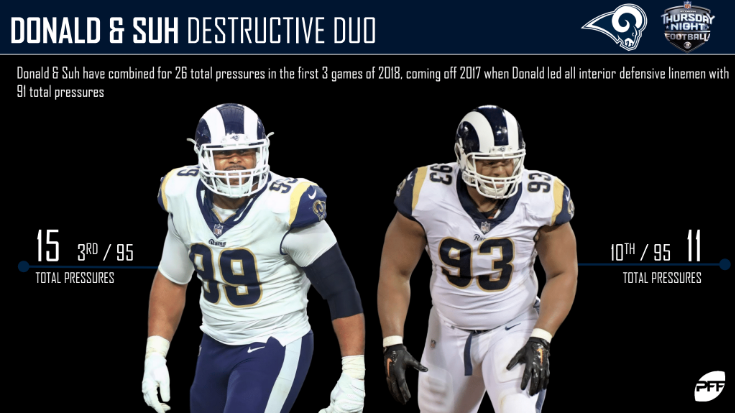 Cornerbacks Marcus Peters and Aqib Talib will be tough for the Rams to replace. On 153 combined coverage snaps, they've combined to yield just 10 receptions for 138 receiving yards. 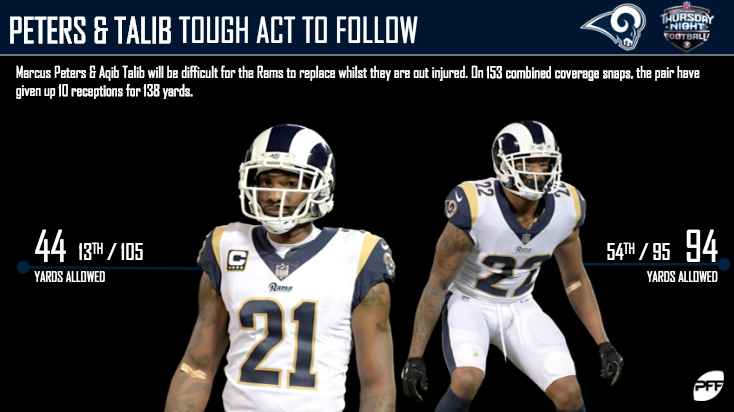 Diggs is the master of contested catches

Stefon Diggs has been one of the best in the league at making contested catches over the past two seasons, and he may need to make a few in this matchup against a talented Rams secondary. Since 2017, his 64.1 percent catch rate on contested throws ranks second in the league, and his near-perfect 156.5 WR rating ranks first. 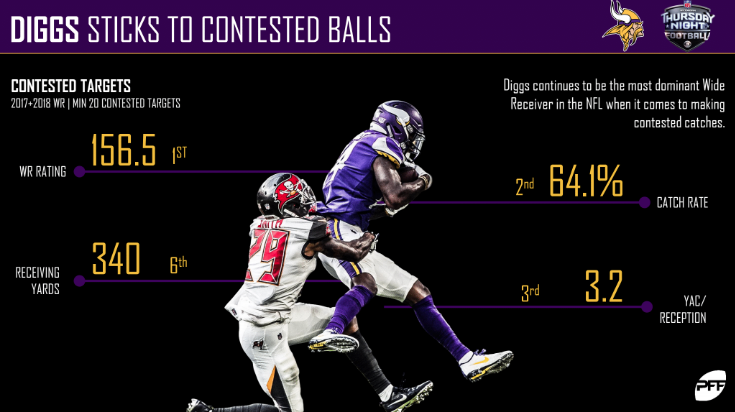 Cook needs to get more room

Dalvin Cook hasn't had much room to run this year, as he's been contacted at or behind the line of scrimmage on 65.0 percent of his carries. He may find more of the same against a defensive interior that includes Aaron Donald and Ndamukong Suh. 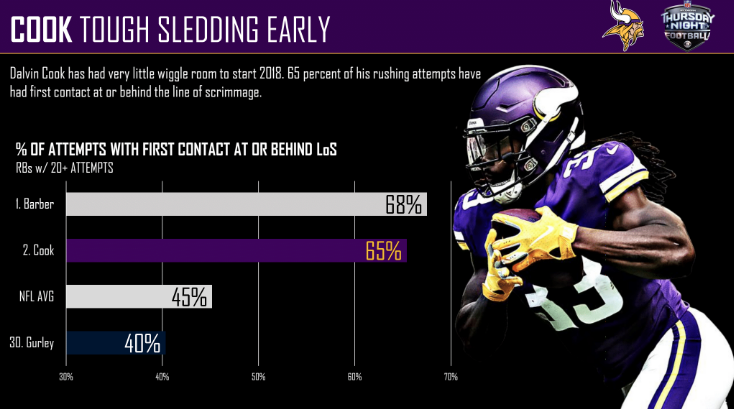 Containing Todd Gurley may be the number one priority for the Vikings defense this week. They've fared well defending the run this year, having missed the third-lowest percentage of tackles as a team. 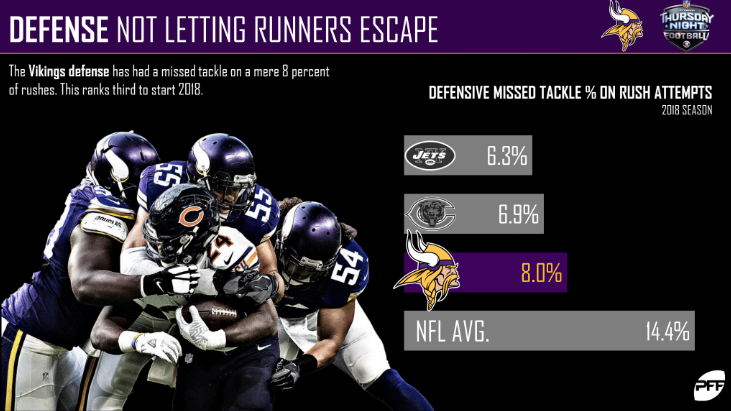 Pressure when it matters 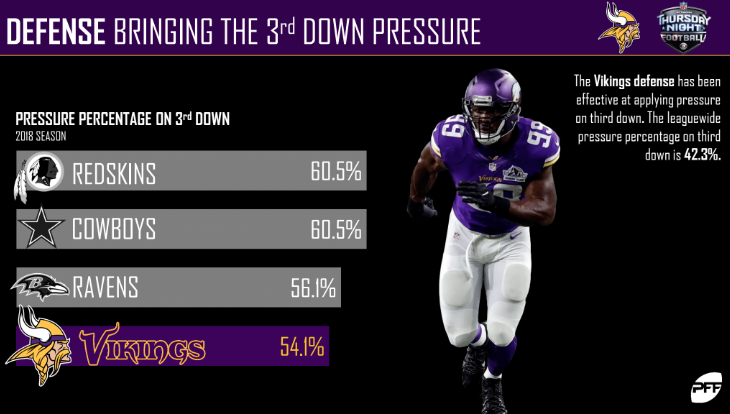 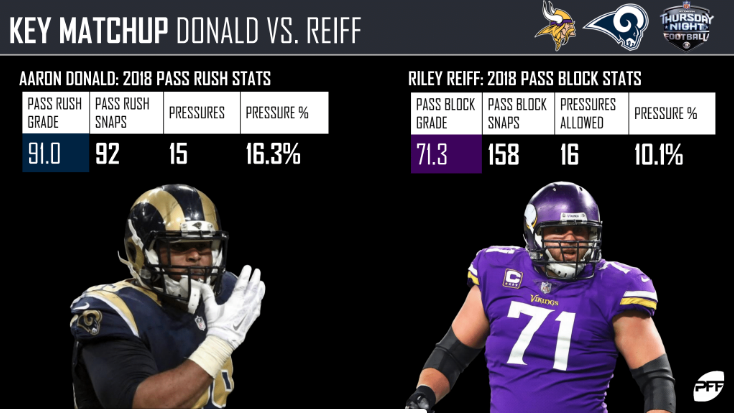 PFF Greenline has projections for the spread, moneyline and over/under of the Minnesota Vikings' matchup with the Los Angeles Rams. Get its picks here.