NFL Week 15 Plays of the Week

Welcome to the Plays of the Week for Week 15 of the 2018 season. Like every week, our team of over 500 analysts has dissected and graded every snap of every game to bring you the most detailed and valid analysis you can find anywhere. Below are the plays that earned our highest grades this week – who do you think produced the best play of Week 15?

If you want to see how these players graded in their Week 15 games, check out all of our regular season advanced statistics and information with PFF Elite and Premium Stats 2.0. 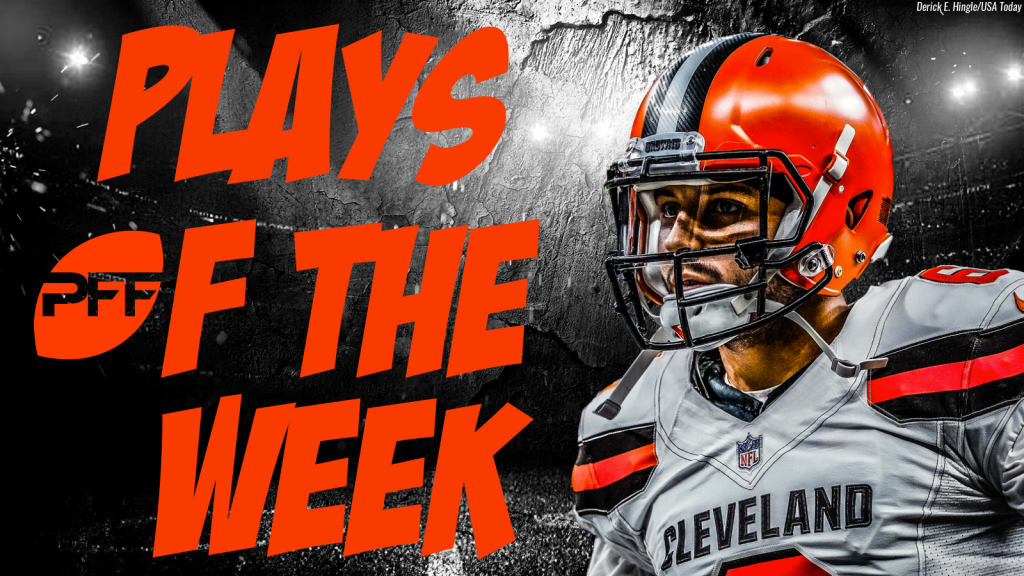 Welcome back, Doug Baldwin! He goes up and makes the catch, keeps his feet then darts to the end zone for a crucial touchdown in the second quarter.

Kalen Ballage got the Dolphins back into the game with this run early in the second half, even if the final score got away from them. With a pair of nice cuts, he found himself in space, then outran everyone to the end zone.

Kevin Byard read the poor pass from Eli Manning and pounced, securing the interception and returning it beyond midfield.

Minkah Fitzpatrick. Read the screen. Picked off the pass. Took it to the house.

With the Chargers driving and trying to score late in the first half, Kendall Fuller went up to secure the interception in the end zone and killed the drive.

Adam Gotsis got around guard Joel Bitonio quickly here to record the sack and a forced fumble for the Broncos defense. If that wasn’t impressive enough, Bitonio came into the game allowing one of the lowest rates of pressure among guards in the NFL.

This would be a highlight reel catch for any wide receiver in the NFL, so it’s even more impressive for cornerback Joe Haden. Sideline grab with two Patriots players draped over him to end a threatening Patriots drive.

The stunt by the Ravens defense should have resulted in a sack, but Jameis Winston cut away from Terrell Suggs before launching the ball downfield for Mike Evans, turning a drive that would have otherwise ended inside their own five-yard line into a scoring opportunity.

James Washington has had his struggles as a rookie, but this wasn’t a play where he struggled. Demonstrating the big play ability we saw at Oklahoma State, he went up and won the ball for a big gain down the right sideline.

It helped that Darius Slay fell on the play, but Josh Allen put the ball exactly where it needed to go, and Robert Foster did the rest as they combined for another score.

A big-time throw by Philip Rivers and some impressive footwork by Travis Benjamin made this play happen. First, Benjamin creates some extra room off the line, then Rivers finds him, putting the ball where only his receiver could grab it.

Big-time throws are becoming routine for Baker Mayfield. Here he found Breshad Perriman for the early touchdown, putting the ball where only he could make the play on it.