NFL Week 12 Plays of the Week

Welcome to the Plays of the Week for Week 12 of the 2018 season. Like every week, our team of over 500 analysts has dissected and graded every snap of every game to bring you the most detailed and valid analysis you can find anywhere. Below are the plays that earned our highest grades this week – who do you think produced the best play of Week 12?

If you want to see how these players graded in their Week 12 games, check out all of our regular season advanced statistics and information with PFF Elite and Premium Stats 2.0. 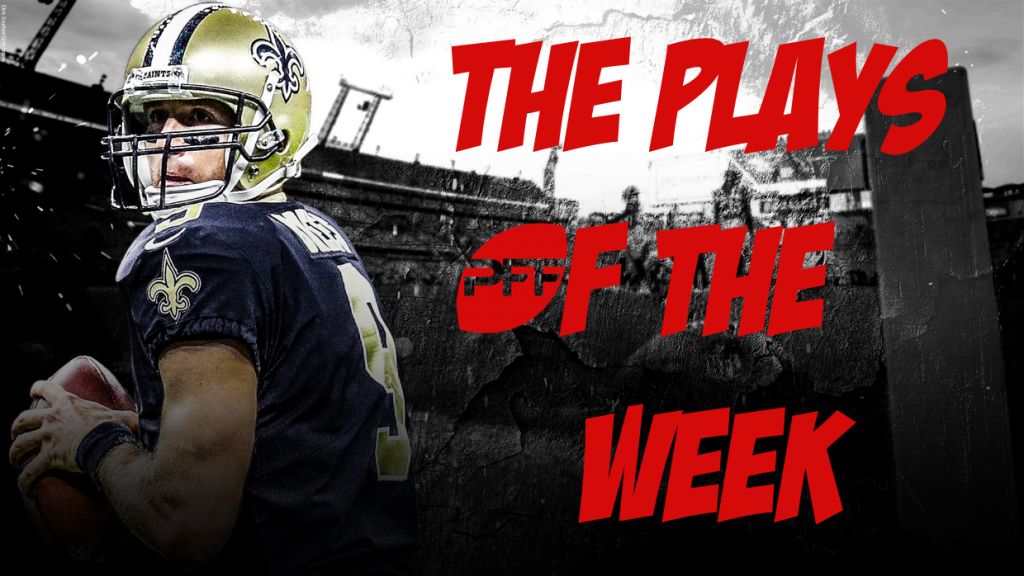 Showing he still has it, tight end Vernon Davis burned the Cowboys with a catch in stride on a deep crosser on Thanksgiving. Once he'd caught the ball, he wasn't going to be caught.

Jared Cook had absolutely no business catching that football. He's going to ground, and the ball is underthrown, but he still manages to snag it with one hand for the score.

For all the accuracy concerns people had on Josh Allen coming out, his ability to make special throws in isolation was never in doubt. With pressure closing in, he tosses the ball over 40-yards in the air with ease, resulting in a catch and run touchdown for Robert Foster.

Showing the lateral agility that makes him a big-play threat, the second overall pick in the 2018 NFL Draft cut his way through the first two levels of the Eagles' defense before turning on the boosters to the end zone.

Showing exactly why the Cowboys traded a first round pick for him, Amari Cooper catches the ball in traffic, makes a cut to turn upfield, and outruns everyone on the Redskins defense to the end zone.

This is vintage Drew Brees, as he looks off the free safety from the snap before taking advantage of the one-on-one matchup and putting the ball where only the receiver could win it.

This play is a great example of JuJu Smith-Schuster‘s game-breaking ability. The catch itself is good, but he then wrong-foots the safety with a nice cut before stiff-arming the same safety on his way to the end zone.

Rookie cornerback Jaire Alexander is in close coverage here, and there's the threat of a big hit from the safety over the top. Despite all of that, Adam Thielen makes the catch look easy resulting in a big gain for the Vikings offense.

Eddie Jackson reads the play perfectly, times his jump perfectly, and turns what would have been a short gain for the Lions into a touchdown for the Bears. It's this playmaking ability that sees him rank as our highest graded safety so far this season.

Another impressive play in a fantastic rookie season so far by Derwin James. Here he is in position to make life difficult for the receiver at the catch point, but once he realizes the ball is off target, he is able to go and make a play of it himself.

The Colts were looking for a big play to get them into field goal range late in the half, but all they found was Xavien Howard. The Dolphins cornerback matched wide receiver T.Y. Hilton stride for stride, then went up to win the ball for the interception.

In his first game back, Joey Bosa gets around the edge quickly here, beating the right tackle with ease on his way to a fourth-quarter sack.

It not often we get to see interior defensive linemen make game ending interceptions, but that's exactly what Shelby Harris did here, dropping off from the line of scrimmage to pick off the throw and end the game.

With just Monday Night Football to go, what has been your top play so far in Week 12?