NFL Units that need to be addressed in the Draft

The turn of April brings with it the final call for draft preparation. With less than a month to go until the Commissioner officially puts the Cardinals on the clock, football fans and executives alike will be making their final evaluations and will be tweaking their draft boards accordingly.

Last week, PFF’s Senior Content Manager Cam Mellor outlined the draft needs of all 32 NFL teams, but as is always the case, some NFL franchises are in much better shape than others right now. Below is a list of the teams, and units within those teams, that simply must be improved through the 2019 NFL Draft.

The Vikings have needed an influx of talent along the offensive line for the past few seasons, and that need is still glaring with limited options besides the 2019 NFL Draft.

As a unit, the Vikings produced a 64.0 pass-blocking grade (27th) and 53.0 run-blocking grade (25th) in 2018. The offensive line also led the NFL last season by allowing 226 total pressures on the year. Their 80.9 pass-blocking efficiency rating in 2018 ranked 29th in the NFL, and over the course of the last three seasons, they have allowed 695 total pressures, 24th among teams.

Minnesota retained the services of veteran guard Brett Jones and swing-tackle Rashod Hill for the 2019 season, and they also added veteran guard Josh Kline via free agency, but their current depth chart isn’t going to cut it next season. Expect the Vikings to target multiple offensive linemen in the draft, but don’t be surprised if those selections come after the first night.

The Chiefs’ secondary is another NFL unit that needs an injection of youth and talent via the draft. The team added a playmaker in Tyrann Mathieu via free agency, but he’ll need some help in turning around a problematic element to the Kansas City defense.

Arguably their best cornerback from last season, Steven Nelson, bolted for Pittsburgh as a free agent this offseason while last season’s addition, Kendall Fuller, regressed from his elite 2017 campaign to a 72.4 overall grade in 2018. As a team, the Chiefs allowed a catch rate of 67.3 percent for over 5,000 yards in coverage last season, and they collectively allowed a passer rating of 96.0 to opposing quarterbacks.

With the defense losing two premier edge rushers from a season ago in Dee Ford and Justin Houston, as well as losing veteran safety Eric Berry, the Chiefs’ secondary will be under intense pressure early and often next season as teams attempt to keep pace with Patrick Mahomes and the Kansas City offense. 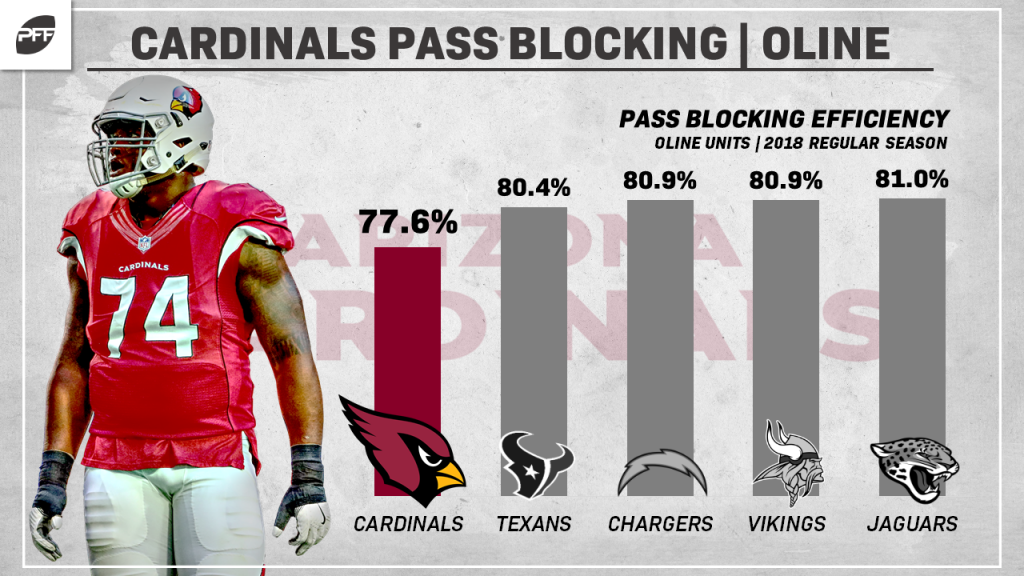 As a unit, the Cardinals’ offensive line was the worst in the NFL last season, finishing at the bottom of the league in total pressures allowed and pass-blocking efficiency. The team produced a league-worst 55.9 pass-blocking grade and 55.8 run-blocking grade (21st) in 2018, and they only added guard Max Garcia in free agency and right tackle Marcus Gilbert via trade with the Steelers.

For an offensive line that generated a 77.6 pass-blocking efficiency rating, worst in the NFL, consistency and an inflow of multiple offensive linemen via the draft is the only option for a turnaround in 2019. This also includes the already-added J.R. Sweezy, who hasn't put forth a season overall grade above 60.0 in two years.

Many question marks are surrounding the Giants’ defense as we move closer to the NFL Draft. The team let safety Landon Collins walk in free agency to their division rival Washington Redskins, and they traded away their most productive pass rusher in Olivier Vernon.

Among the team’s flurry of questionable offseason moves, the team acquired safety Jabrill Peppers from the Browns as a part of their return for the Odell Beckham Jr. and Vernon trade. As PFF Senior Analyst Mike Renner points out, Peppers can add value to the Giants' defense with the skillset to fill Collins' shoes at a much cheaper price tag. He generated a 77.6 overall grade last season, and his 12 pressures were the third-most among safeties.

However, Peppers may only be one of few bright spots on the Giants’ lackluster defensive depth chart. Expect the G-men to target the defense often in the draft, and with multiple early round picks, the potential is there for adding high-level talent with long-term upside on that side of the ball.

Quietly, the Baltimore Ravens’ pass-rushing unit has been depleted this offseason with the losses of Terrell Suggs and Za'Darius Smith on the edge.

With three draft picks in the first three rounds, adding an elite pass rusher should be tempting at pick 22 for Baltimore. The Ravens’ secondary will be among the best in the NFL next season, especially with the addition All-Pro safety Earl Thomas, so an injection of youth in the defensive front-seven might once again push the Baltimore defense from good to great.