What an interesting wild-card weekend in the NFL. All four home teams were favored by at least six to win their respective games, and all four failed to cover, with the first two (Kansas City and Los Angeles) losing outright. Some teams with a first-round bye saw their probabilities of advancing increase with the outcomes of the wild-card games, while others will have a tougher road ahead as stronger teams advanced.

Alas, we’re back to handicap the rest of the playoffs using our PFFELO system, as well as some of the other metrics that go into our weekly spread and over/under picks. We’ve simulated the playoffs a few thousand times to determine the probability each team advances to each remaining round, as well as the probability each team wins the Super Bowl. These will be updated each week to reflect the results from each week, culminating in our eventual pick during Super Bowl week.

Note: We do not give Minnesota homefield advantage should they make the Super Bowl. We simply do not have the historical data to determine how much (if any) to give to them, and hence err on the side of caution here.

Probability of advancing to the Championship Round: 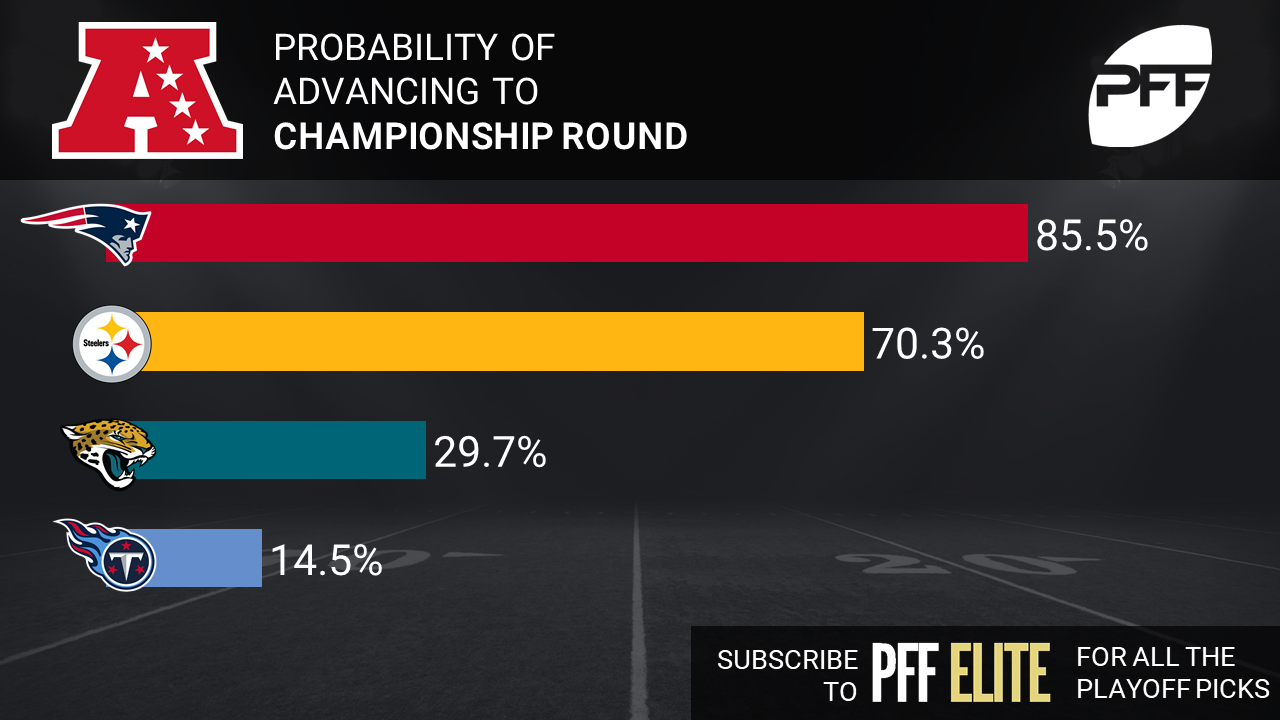 With what was the third-strongest AFC team in the playoffs eliminated by Tennessee last Saturday, New England’s path to their seventh-consecutive AFC Championship Game got slightly easier. On the other side of the AFC bracket, the Steelers drew a Jaguars team that has a top-three defensive rating in our system and beat Pittsburgh, handedly, in Week 5 (for what it’s worth). This string of events slightly dropped Pittsburgh’s likelihood to set up a rematch with New England for the AFC title. While this week looks to be a boring one on the AFC side… so did last week, and we ended up with two competitive games. Stay tuned. 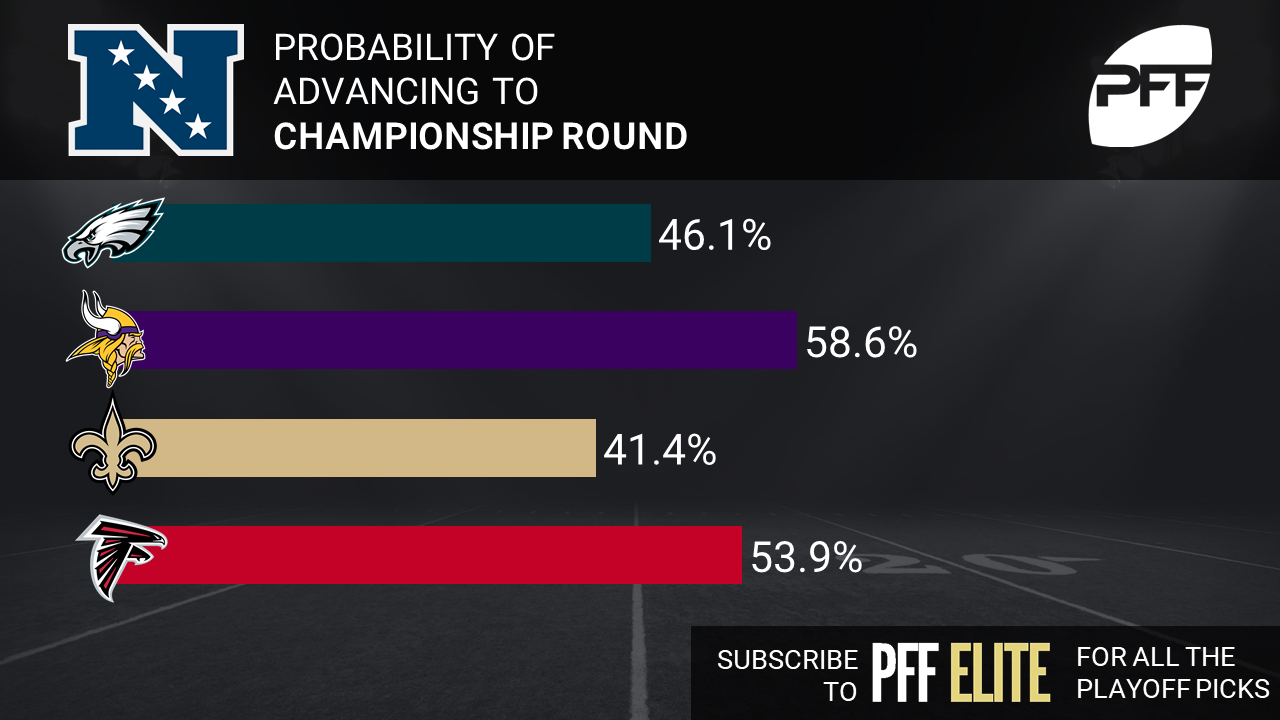 For the NFC’s top seeds, last week’s games probably couldn’t have gone any worse. A relatively-hot, and mathematically-underachieving Falcons team seemed to put it all together against the Rams, forcing the market to take notice (en route to setting up the first-ever divisional matchup where the conference’s top seed is an underdog). Adjacent on the NFC ledger, the New Orleans’ defense has had a difficult time of it lately, surrendering more than 400 yards of total offense the last two weeks and falling to seventh in our overall rankings for the season. While they are a far cry from the team that gave up 470 yards and 29 points to Minnesota in Week 1, anything other than approximating, one of the league’s better defenses will struggle against a Minnesota team, with the league’s best defense and one of the league’s best offensive supporting casts at home on Sunday. 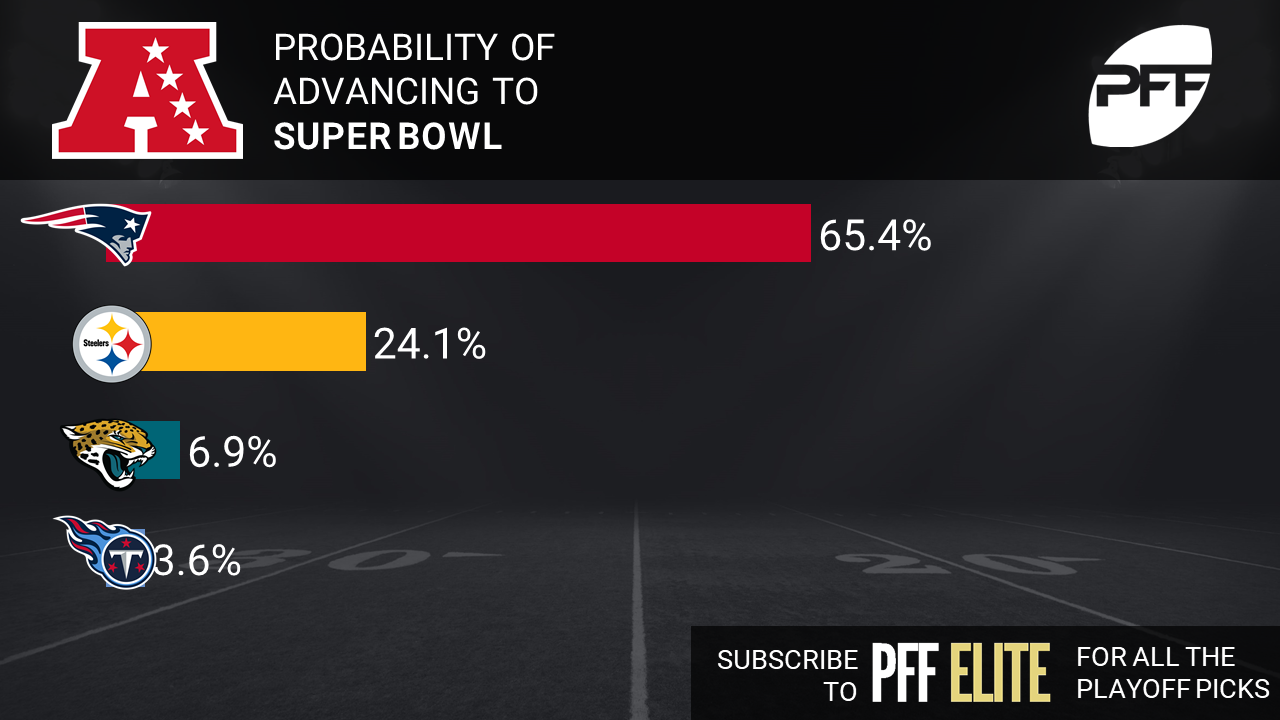 As with last week’s projections, this is where New England’s strength over the rest of the AFC shows up (their PFFELO rating is about 50 points higher than Pittsburgh’s). While the Patriots’ have the fourth-lowest-rated defense in our metrics, they have allowed over 17 points just twice since Week 5, with a starting secondary boasting all four players with PFF player grades above 80.0. Should they make it, it will be up to Big Ben (our highest-graded passer since Week 6), Antonio Brown (the league’s highest-graded receiver all season) and Le’Veon Bell (second in the league in rushing yards gained after contact) to overcome their own deficiencies on defense to pull an upset in Foxboro. 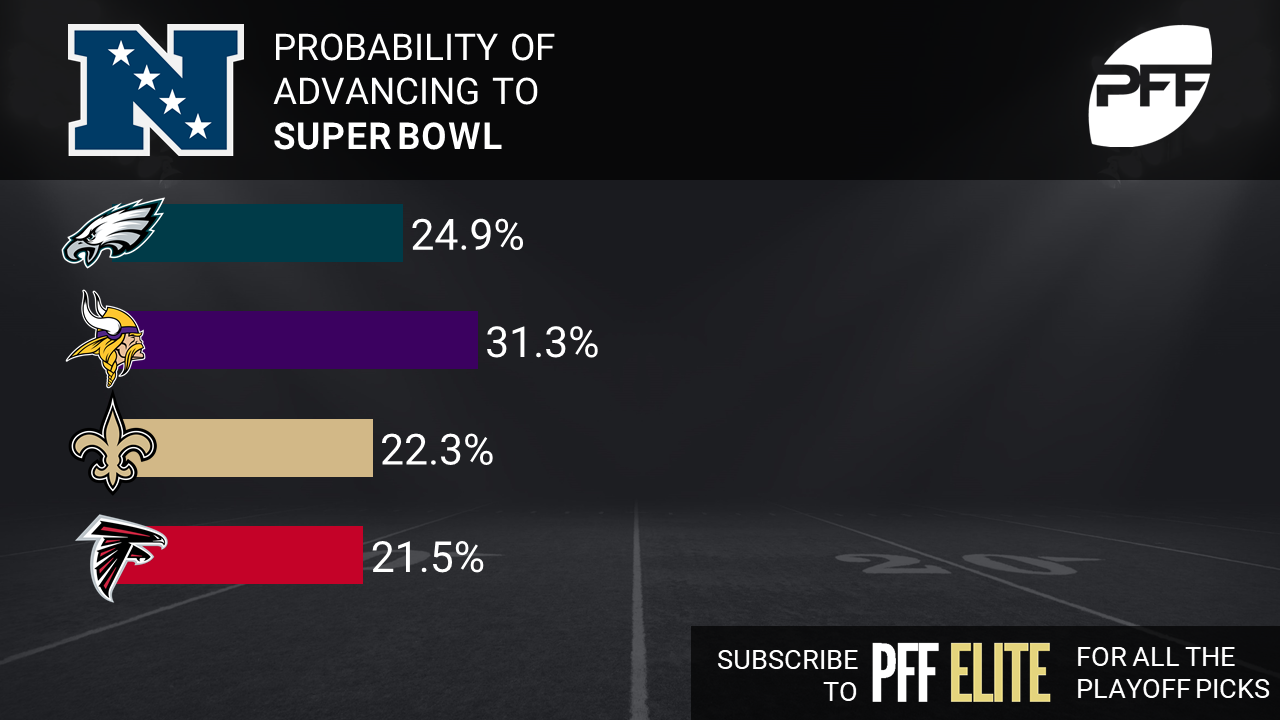 As they were last week, the Vikings are the favorite to represent the NFC (and be the first team to earn homefield) in the Super Bowl. Unlike the AFC, however, the field is pretty uniform in their likelihoods to make the big game, with two Super Bowl quarterbacks breathing down the neck of teams employing backups at the league’s premium position. The NFL’s not-so-dark horse (Atlanta) has a reputation for having an explosive offense with league’s second-highest graded quarterback (Matt Ryan) and third-highest graded receiver (Julio Jones) propelling matters. However, it might be their defense (second in our rating system) that elevates them to a long-odds repeat appearance in the Super Bowl, led by Deion Jones and his 90.5 overall grade (fifth among all linebackers). 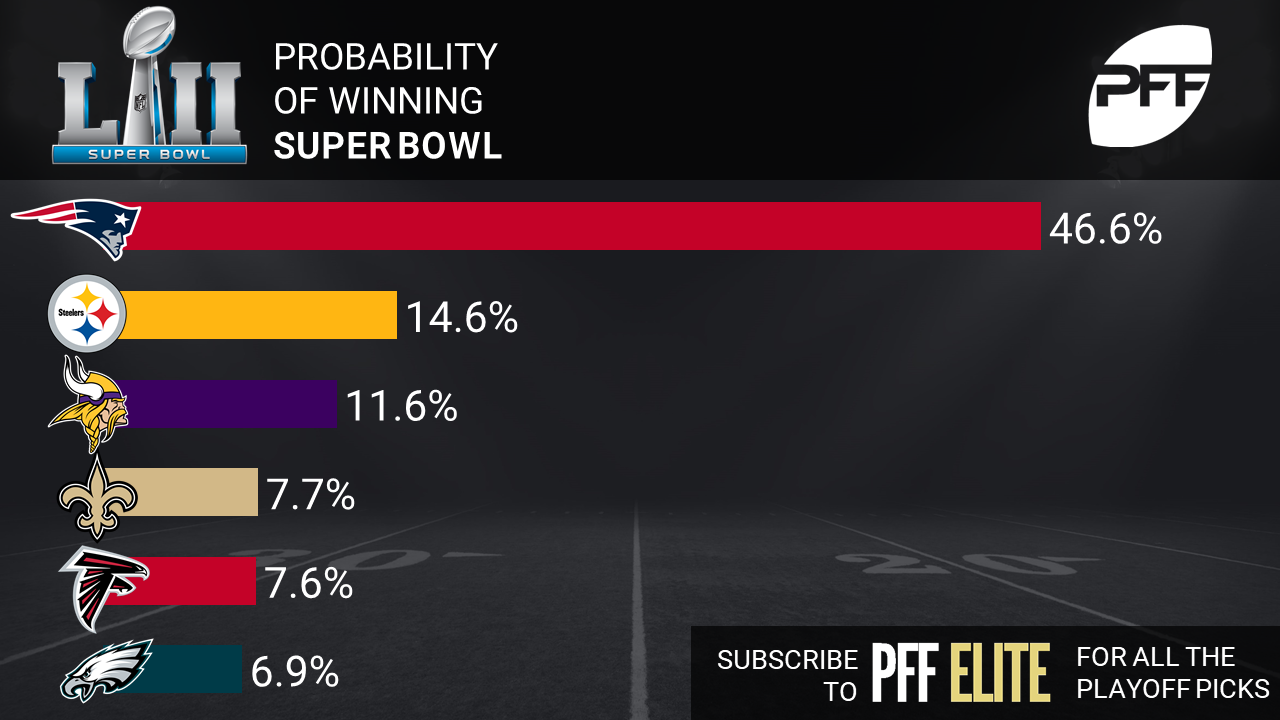 With slightly better odds than a week ago, we like the Patriots to take their second-consecutive Super Bowl title and their sixth in the Brady/Belichick era. While there are many challengers in the NFC that would make great opponents in the Super Bowl, the balance among that conference makes it difficult to handicap any of them as more than 12 percent favorites to win it all for themselves. One interesting thing to note here is the impact of homefield advantage in the NFC Championship Game: The Eagles have a slightly better chance to make the Super Bowl than the Saints or Falcons, but once they get there (in a neutral site), they are far less likely to be able to take down a team like the Patriots or the Steelers; affording higher odds to the Saints and the Falcons for NFL supremacy behind New England, Pittsburgh and Minnesota.