NFL free agent signings that paid off in 2018

Free agency can be a tricky bargain. That high-priced jewel in the window might not be what your team needs to take it to the next level. Some of the biggest money deals from a season ago – Nate Solder, Trumaine Johnson, and Kirk Cousins – all fell flat at their new respective destinations. On the other hand, other players switched franchises and made their presence felt right of the bat. Here are the five free agents that presented the most value in free agency last year.

It’s hard to argue with the results as the Rams went to the Super Bowl, and even in that game, the defense did more than enough for a win. It wasn’t even a banner year for Suh, but he was well worth the $14 million on a one year deal. Suh played the third-most snaps of any defensive tackle during the regular season, earning an 80.2 overall grade. Through the playoffs, he racked up nine pressures, two more than teammate Aaron Donald.

The safety market in free agency last year was inexplicably non-existent, even with a handful of talented names available. Coming off a season where he earned an 89.0 coverage grade, Boston had to settle for a one-year, $1.5 million deal with the Cardinals. He went to Arizona and proved that his 2017 season was no fluke. He picked off three passes and broke up seven more while earning a 78.2 coverage grade on the season.

The rest of the 49ers' secondary may have collapsed around him, but Sherman was one of the stingiest corners in the league once again. The former Seahawk ranked first in coverage snaps per reception and fourth in yards per coverage snap. He didn’t have a pick for the first time in his career, but much of that was because he was only targeted 40 times all season. 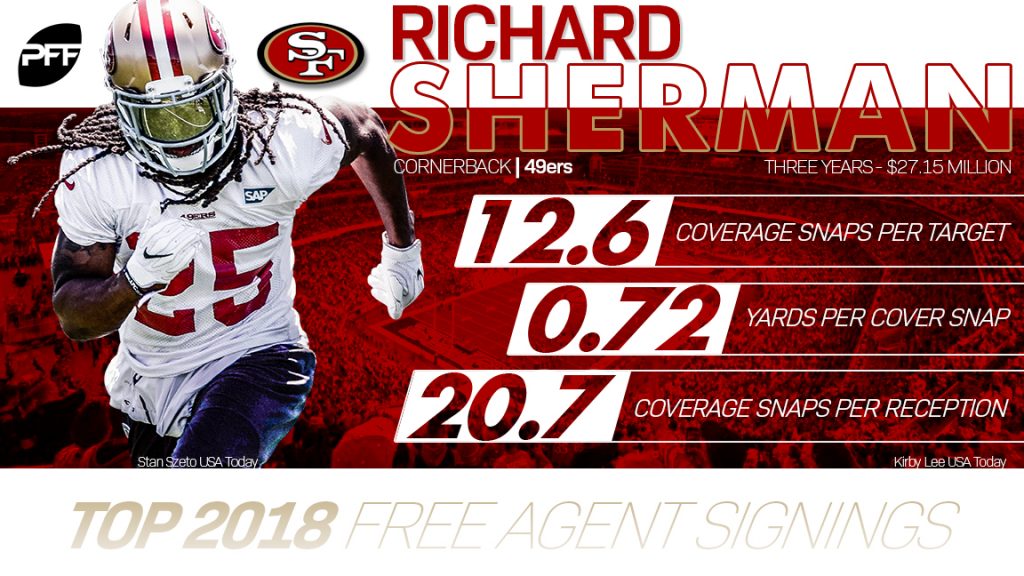 Ebron flashed the talent that made him a first rounder every so often in Detroit, but consistency was his biggest issue. In Indy, Ebron emerged as a focal point of the offense, and the inconsistencies went away. His five drops were his fewest since his rookie season despite setting a career high for receptions with 66. Where Ebron truly set himself apart was in the red zone. His 13 touchdowns were three more than any other tight end this season. Still only 25 years old on a two-year, $13 million deal, Ebron looks like a steal. 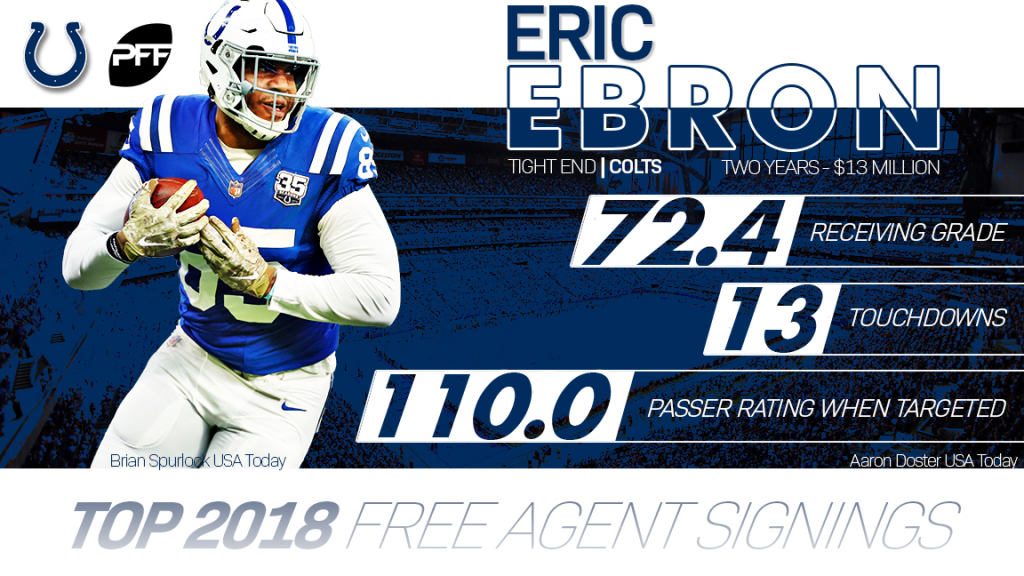 The linebacker position in New Orleans has been an issue for years despite the team throwing numerous resources at the position. This season it finally got solved with a moderate investment in an aging linebacker from the Jets. Davis was coming off a career-high 73.7 overall grade in 2017 when he signed a three-year, $24 million deal with New Orleans. He repaid the Saints with yet another career year. Davis was the key to one of the league’s best run-defense units in 2018. His 86.6 run-defense grade during the regular season ranked fourth among starting linebackers.