In an effort to right the ship this offseason, the New York Giants hired a new head coach and made some major splashes in free agency. The franchise also drafted a few rookies whom they expect to contribute immediately. This busy offseason is evidence of a concerted effort to conjure one more Super Bowl run in the Eli Manning era. 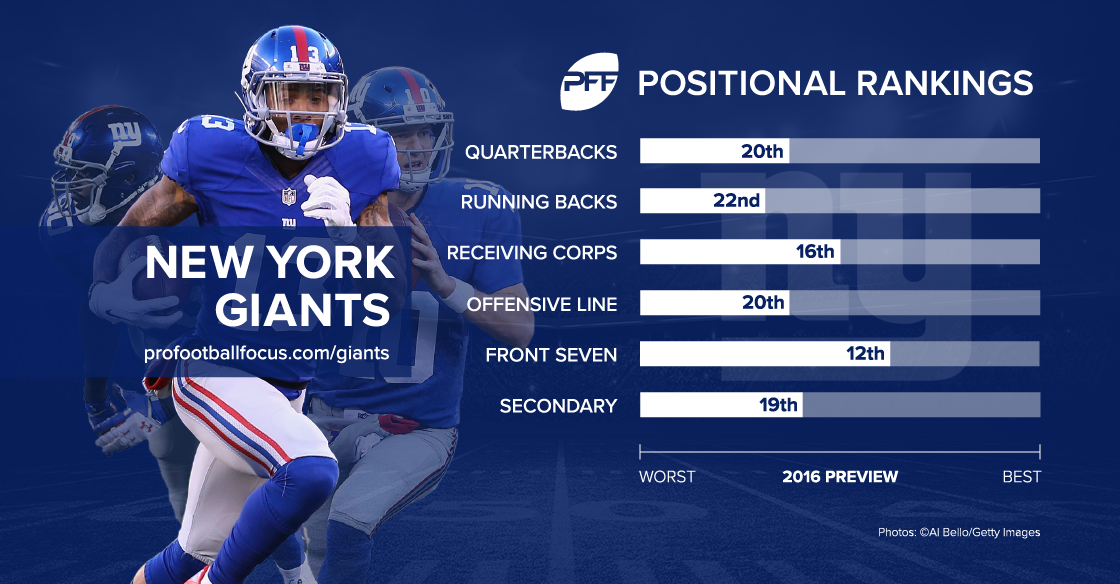 1. Free-agent upgrades throughout the defense

The Giants added a few big names in free agency, most notably: DE Olivier Vernon (Dolphins), DT Damon Harrison (Jets), and CB Janoris Jenkins (Rams). For the third straight season, Harrison led all defensive tackles in run-stop percentage, at 18.1. Jenkins recorded 10 pass defenses in 2015, tied for 12th-most among NFL cornerbacks. The Giants owned a bottom-five defense last year, so all of these players should help improve the unit immediately.

The Giants last won a Super Bowl in the 2011 season, and since then, most of the players from that team have departed. The only remaining offensive or defensive players who played a snap in that game remaining are Eli Manning, Victor Cruz, and Jason Pierre-Paul—and the Giants are expecting big things out of all three. While Pierre-Paul only had one sack last season, his 10.3 pass-rushing productivity mark was tied for 10th-best among 4-3 defensive ends. Victor Cruz, at his best, was one of the top slot receivers in the game. His 2.30 yards per route run from the slot in 2012 was second-best for slot receivers. Eli Manning’s passing grade, however, has declined each year since the last Super Bowl season. If any of these players can perform like their former selves, it will be a huge lift for the roster.

The biggest concern for the Giants heading into the season is the offensive line. They are solid at left guard and center, with Justin Pugh and Weston Richburg, respectively, who both changed positions before the 2015 season. However, at tackle, Ereck Flowers and Marshall Newhouse were both among the lowest-graded OTs in the league last season, and no upgrades were made at either spot this offseason. At guard, they let go of Geoff Schwartz, which pushes John Jerry back into the starting lineup. If the offense doesn’t live up to expectations, chances are that the O-line's shortcomings will be the biggest cause.

It’s not often that a second-round pick is handed a starting job so soon, but Sterling Shepard is already expected to start opposite Odell Beckham Jr. and be an every-down receiver (likely moving inside in three-WR sets). In 2015, he was PFF's highest-graded college receiver. When targeting Shepard last season, Oklahoma QBs had a passer rating of 133.1, fourth-best among all FBS receivers. Reviews out of camp have been positive thus far, and the former Sooner is in position to make a big impact right away.

The highest-graded player on the Giants' roster from last year was Odell Beckham Jr., but after free agency, that changed to Olivier Vernon. Over the second half of last season, Vernon was averaging one sack, three hits, and three hurries per game. Especially notable was his game against Dallas, where he recorded one sack, three hits, two hurries, and a solid run-defense grade; this led to Cowboys LT Tyron Smith’s worst grade for the season, and the worst pass-blocking grade of his career. If Vernon can continue to play as well as he did late last year, he and Pierre-Paul will form a nearly-unstoppable duo.

In general, Landon Collins' rookie season was a disappointment; his 56.2 overall grade was 12th-worst among safeties. However, he already showed signs of improvement as the 2015 season went on. Four of his top six games came in the last six games of the season, while two of his worst three came over the first three weeks. He cut his missed tackles in half, with 10 over the first half of the year, to just five during the second half. His seven passes defended were second-most for safeties in 2015. Ideally, Collins continues his upward trend and is an asset to the New York defense in 2016.