Yesterday, PFF announced our All-Pro teams for the 2017 NFL season, but even with a full first and second team, that leaves some excellent players coming off outstanding seasons out in the cold, away from recognition.

The debate for All-Pro was very close in a number of positions, and there were several players that can count themselves very unlucky to miss out on a place. Those of whom I wanted to recognize in some way, even if it was only by articulating how close they came to the team and how deserving of praise their 2017 season was.

So what follows is a dozen players that just missed the cut for the PFF All-Pro teams.

The New Orleans rookie made a colossal impact on the Saints' defense in Year 1, and had he not missed some time injured, he would likely have been on the All-Pro team. Lattimore was good enough over his rookie year that the Saints decided to use him to shadow Julio Jones – arguably the game’s best and certainly the game’s most athletically gifted receiver – twice, late in the year.

Despite that colossal task, Lattimore allowed a passer rating of just 45.3 over the season, less than six points higher than simply throwing the ball away every snap, and he didn’t surrender a touchdown all season. He intercepted five passes, including what has now become known as the ‘Butt-pick’ (an interception that landed on his backside before being secured) and broke up 10 more incompletions into his coverage, transforming the New Orleans defense from the minute he stepped on the field. 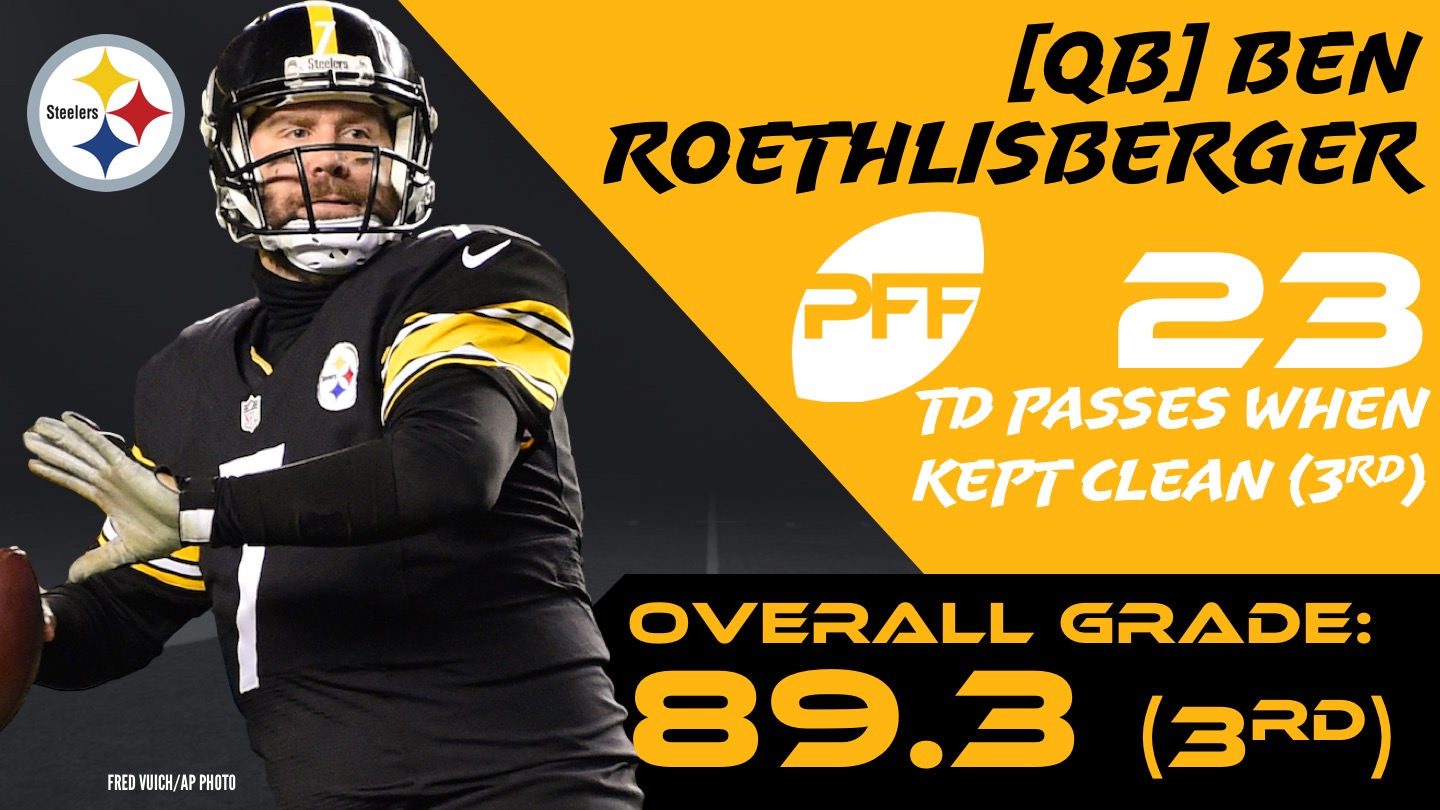 While the gap between Tom Brady and any other quarterback in the league this season was huge, the gap between 2nd-Team All-Pro Matt Ryan and Pittsburgh’s Big Ben was just half a grading point. Roethlisberger began the season slowly, but there was no better quarterback in the game over the second half of the season. His play down the stretch was a big reason the Steelers propelled themselves to a first-round bye in the AFC playoffs and came within a controversial officiating decision from securing the No. 1 seed and home-field advantage throughout the postseason.

Roethlisberger came up big in some of the most critical game situations for the Steelers and was unfortunate to be edged by Ryan for that second spot.

Hunt averaged 3.1 yards per carry after contact and also led the league in broken tackles, making 61 players miss from 272 carries on the ground and another 16 from his 53 receptions. His mid-season slump owed more to the Chiefs' offensive line being unable to open the holes for him they had earlier in the season, and he was able to bounce back late in the year, proving he was not the victim of a rookie wall. If he had been able to maintain his strong start to the year, he would have had a real shot of being the best-graded back in the league, but as it was, that slump was enough to see him miss out narrowly on even a place on the 2nd-Team.

Baldwin is a massively underrated player who doesn’t get the recognition he deserves because he doesn’t put up monster numbers in a Seahawks passing attack that is rarely prolific. If you watch Baldwin on tape, however, it is clear he is a special weapon and vital for the success that Russell Wilson has at quarterback.

Baldwin may have the best release off the line of any receiver in football, and although he may not have blazing top-end speed and is considered relatively small in stature, this allows him to achieve quick and significant separation and make plays even against top defensive backs. He failed to top even a 1,000 receiving yards this season, but more often than not when Wilson was in trouble, it was Baldwin who he heaved a desperation pass towards. On more than one occasion, Baldwin was able to take the ball away from defensive backs and turn a gamble into a big play. Baldwin scored eight times, dropped just one pass from 112 targets and had the sixth-best overall PFF grade at the position with 88.2. 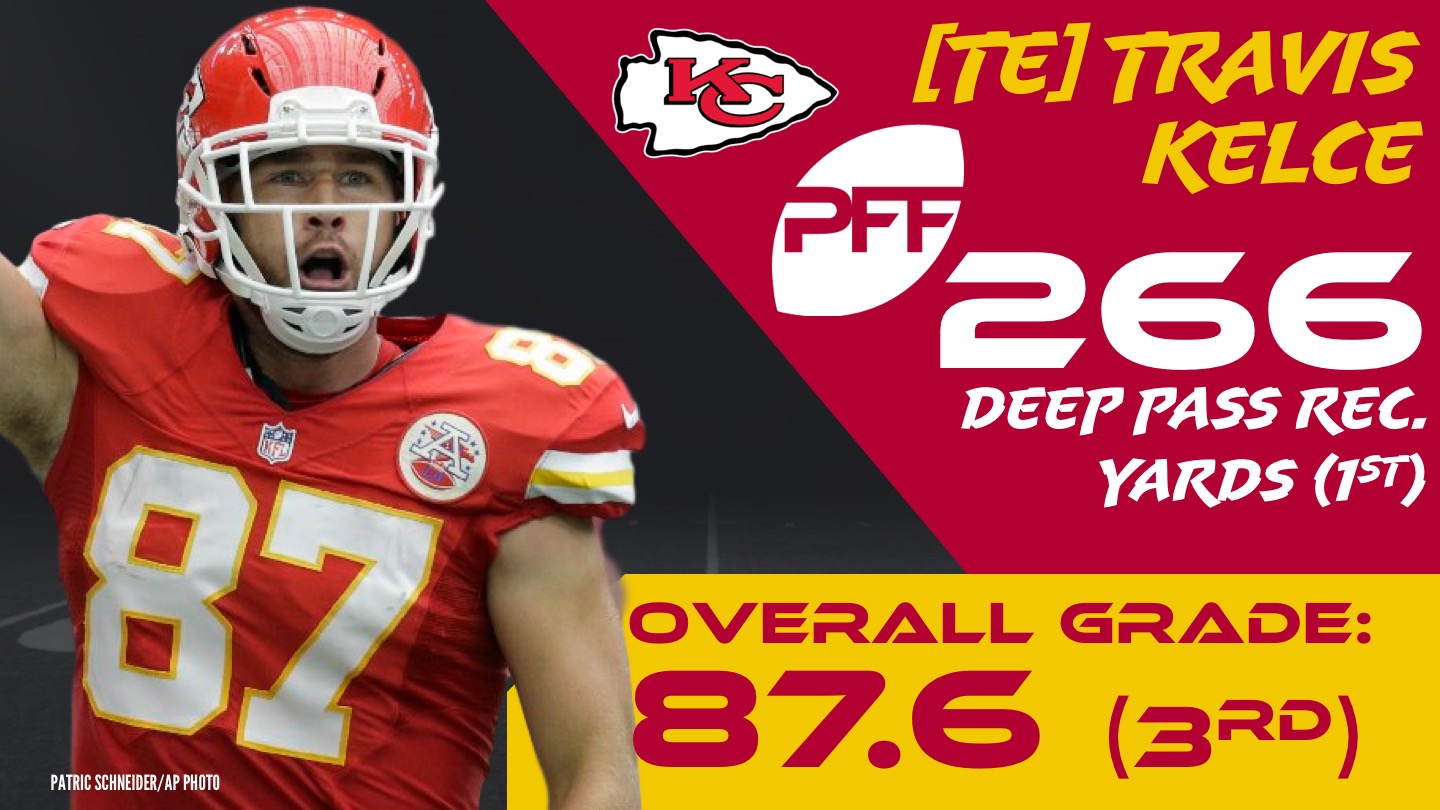 It seems that the entire Kansas City offense suffered a slump at some point during the season, and Kelce was no exception, struggling towards the end of the year to have the same kind of impact that he had at the beginning, at least from a grading standpoint.

He, of course, remained one of the game’s most devastating receiving weapons from his tight end spot and one of the true matchup problems in the NFL. But what really separated Kelce from the two players that made the All-Pro teams ahead of him was blocking. Both Rob Gronkowski and Hunter Henry had exceptional run-blocking grades to go along with their effectiveness as receivers, while Kelce couldn’t quite match that level over the year, which is the only thing that held him back from a spot on the team, and even then only narrowly.

This season, Mack was the player that set the early pace at the center position, making PFF’s Team of the Week for the first two games and leading the grading through the first month of the season. Unlike Jason Kelce and Travis Frederick, however – the two players that made the All-Pro teams ahead of him – Mack had a few bad outings that were enough to drag his grade down a little from the rest of an otherwise excellent season.

Mack ended the year with back-to-back poor performances against tough defensive interiors of the divisional rival Saints and Panthers, while also struggling early in the year against the Patriots and again when facing Carolina. Mack’s highs this year were as good as anybody at the center position, but there were just a couple more poor performances than he needed to maintain a spot on the All-Pro teams.

There may be no more unfortunate player to miss out on a spot on the All-Pro teams than Eagles right guard Brooks. In terms of PFF grades, Brooks was the fourth-best guard in the league, and with two teams to populate, you might think he would naturally make at least the 2nd-Team. PFF’s All-Pro, though, sticks true to positions along the offensive line, whether you played on the left or right side.

Brooks was the fourth-best guard in the league, but the third-best right guard, so he stands behind David DeCastro and Zack Martin.

That shouldn’t detract from what was a fantastic season for Brooks, who matched his impressive 2016 season and even improved on it a little, allowing a total of just 17 pressures over the 16-game season and not surrendering a sack all season. 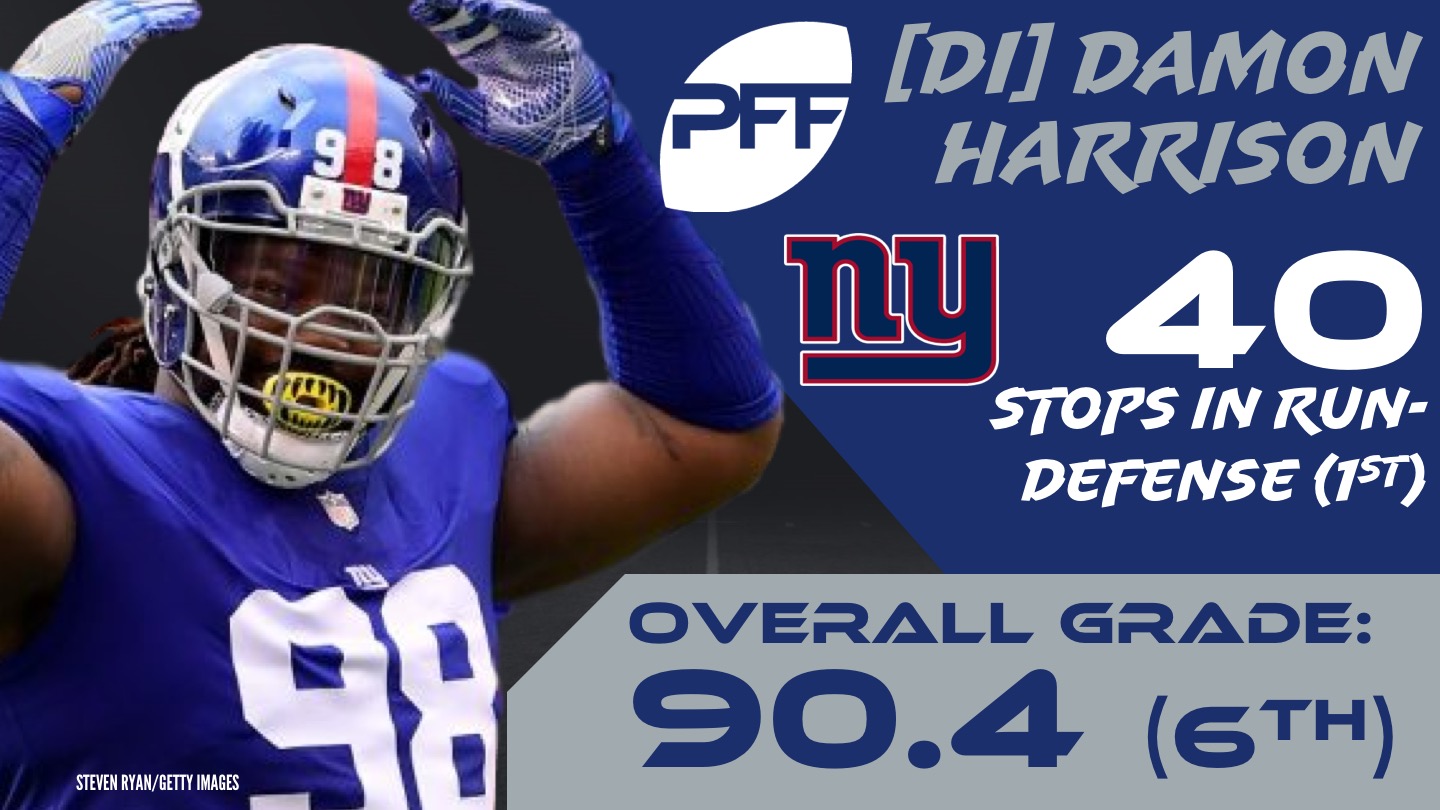 There is no more dominant run-defending force in football than Harrison, and if he had come along in a different football era, we may be talking about one of the most dominant players to ever play the game. But 2017’s NFL is a passing league, and as phenomenal as Harrison is against the run, he just doesn’t bring quite enough as a pass-rushing force to overhaul the likes of Ndamukong Suh or Kawann Short that made the team ahead of him.

Harrison had just 17 total pressures all season, less than a third of the number Short was able to amass for the Panthers, and he was out there as part of the defense on passing plays 323 times.

But in terms of run defense, he has a strong case to be worthy for that alone. He led the league in run-stop percentage for the fifth-straight season, as well as topping 40 run stops for the third time in his career, or three times as many as the rest of the NFL combined over the last decade-plus.

Over the last couple of seasons, Mack was one of the five best players in football, and while he took a minor step back this year, he was still exceptional, but so were a number of other edge defenders. Mack notched 78 total pressures, the third-best mark among edge rushers, but only five players rushed the passer more times than he did this season (509 snaps), and his pass-rushing productivity score was just 11th. That score is a per-snap measure of his pass-rush and illustrates that he wasn’t quite as efficient as his raw totals suggest.

Mack’s overall grade was still a hugely impressive 92.1, firmly in the blue-chip ‘elite’ category at PFF, but he was just edged out by breakout seasons on the edge from players like DeMarcus Lawrence in Dallas and Calais Campbell in Jacksonville.

Another player at a position in which there were a huge number of worthy candidates for too few spaces, Chargers edge defender Ingram found himself on the outside looking in, just like divisional-rival, Mack. Ingram and teammate Joey Bosa were both destructive forces for the Chargers this season, and together formed the best pair of pass-rushers in the league.

Ingram notched 76 total pressures from 486 pass-rushes, giving him the eighth-best pass-rushing productivity score among all edge rushers, and he actually had the third-best PFF pass-rushing grade (92.3) among edge rushers, but he wasn’t quite the run defender that other players at that position were, and so slipped just far enough in the overall rankings to miss out. 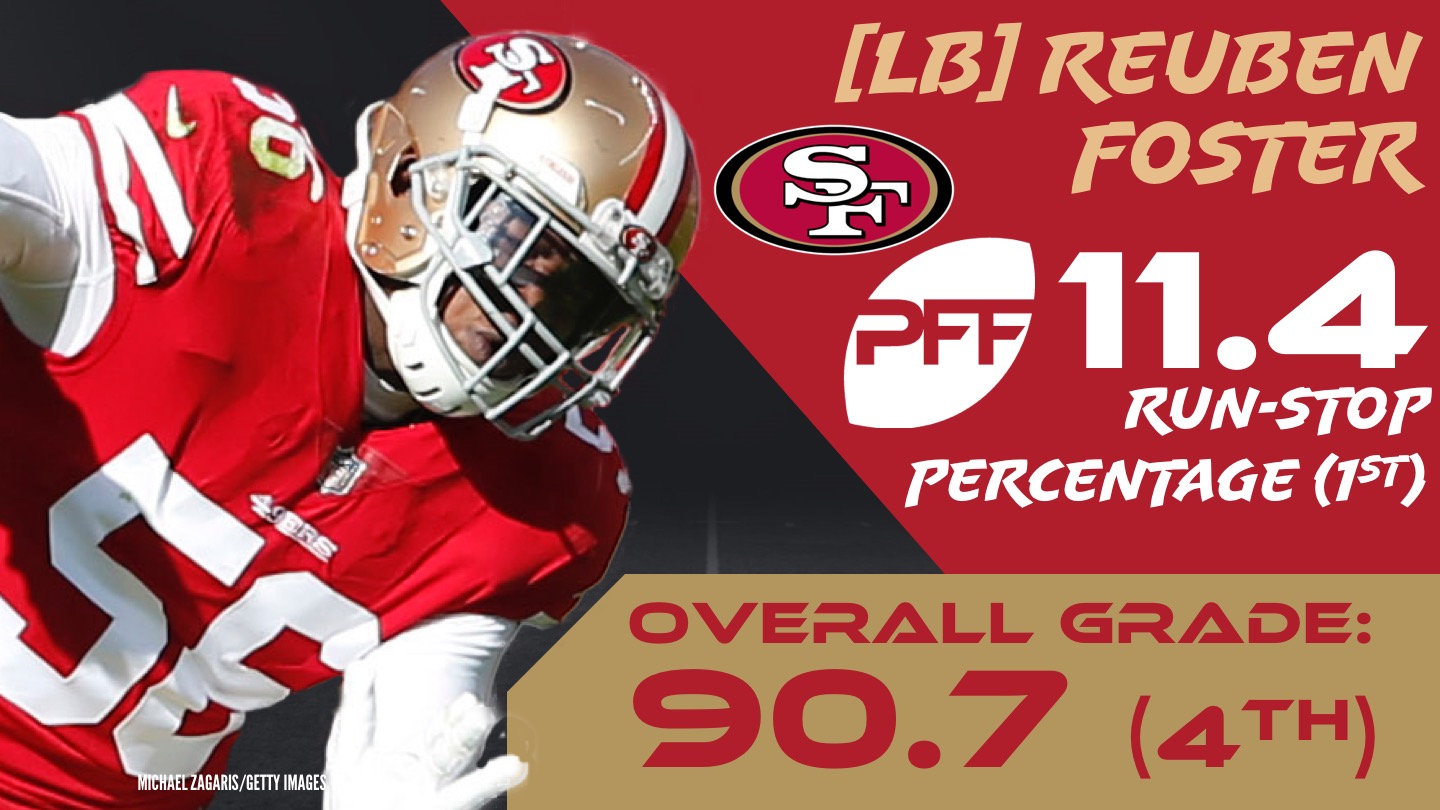 Had the 49ers been able to keep Foster healthy and on the field all season, he would almost certainly have made the All-Pro team, and quite possibly on the first team. As it is, Foster ended the year with an overall PFF grade of 90.7 from just 553 total snaps, an incredible number for a rookie linebacker, and looks every bit of a star in the making.

Foster ended 2017 leading the league in run-stop percentage for all linebackers with 11.4 percent, narrowly edging first-team All-Pro Luke Kuechly in that category. Foster’s ability to read and react with speed brought to mind other recent great linebackers to wear the 49ers jersey, and he looks like a worthy heir to Patrick Willis and NaVorro Bowman.

Cox has the ability to dominate players like few others in the game. Multiple times throughout this season, he took powerful and dominant guards and either drove them into the quarterback or just tossed them aside. His brute power can be something incredible to behold. Sitting out the majority of the final game of the season didn’t help his quest to build on his grade, but the defensive interior is another spot where there were simply too many deserving candidates for the number of places available.

In truth, there were maybe 10 deserving players that could easily have been named All-Pro inside, but only four can make the cut, so Cox missed out by the narrowest of margins. All that separated him from the likes of Suh was the fact that Suh was on the field significantly more (270 additional snaps).