Mike Mitchell proves he still belongs in the NFL, shines in Colts debut in Week 6

Injuries to Clayton Geathers (neck) and Matthias Farley (hamstring) forced the Indianapolis Colts’ brass to pull the 10-year, 31-year-old veteran safety Mike Mitchell off the couch and into the team’s Week 6 affair with the New York Jets on Sunday. Mitchell, however, gave no inclination that he’d been spending any time on the couch.

The former Oakland Raiders and Pittsburgh Steelers safety, Mitchell was thrown into the fire to the tune of 54 defensive snaps against Sam Darnold and the Jets, but he came out of the blaze unscathed. The former Ohio product earned an 84.8 overall grade for his efforts, ranking first among all NFL safeties with 25-plus defensive snaps in Week 6.

Mitchell moved quickly to the ball and performed well in traffic near the line of scrimmage, often sifting through blocks or ball fakes to make plays in the run game and limit short passes. He earned an 82.1 run-defense grade and a 72.6 coverage grade on the day, ranking first and 10th, respectively, among qualifying safeties.

Though he’s surely lost a step since entering the league as a second-round pick in the 2009 NFL draft, Mitchell still adds a twitchy, hard-hitting presence to a Colts’ secondary that has lacked such qualities since Bob Sanders moved on from Indianapolis in 2009. Mitchell recorded five defensive stops and missed zero tackles on Sunday, the former metric ranking second only to New York Giants star safety Landon Collins. He also had seven total tackles and was called for zero penalties in the contest. 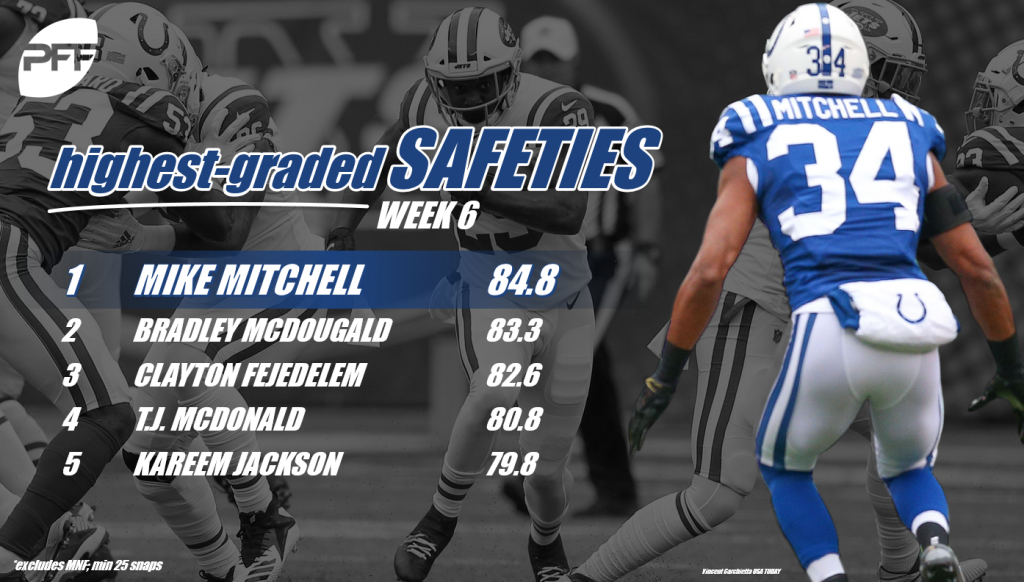 Four of Michell’s five defensive stops came against the run, as he read plays quickly and pushed to the line of scrimmage with bad intentions. Among safeties with at least three tackles in Week 6, Mitchell ranked second behind Los Angeles Chargers’ Jahleel Addae in average depth of tackle.

Darnold targeted Mitchell twice on the day and completed both attempts, but the Colts safety limited the two receptions to just six yards – a testament to his ability to tackle in the open field and effectively play shallow passes.

The Steelers’ release of Mitchell in March was understandable given the team’s cap situation, but the lack of interest in the experienced safety in free agency and through the preseason was a head-scratcher. He didn’t blow anyone away with his play in 2017, but he still was serviceable and well-worth a flyer to compete for a depth role on any 53-man roster. He proved just that on Sunday.