If healthy, WR Albert Wilson could be primed for a breakout season in Miami

Albert Wilson expects to be out on the field with his teammates when the Miami Dolphins host the Baltimore Ravens in Week 1.

The 26-year-old signed a three-year deal with Miami last offseason and got his Dolphins career off to a strong start before suffering a season-ending hip injury. The former undrafted free agent gave an update on his status earlier this month, via the Miami Herald.

“Every test they’ve wanted me to take I’ve been right on track so there’s no reason why I shouldn’t be out there Week 1. I’m 100, I’m ready to go in when they give me the OK.”

Wilson posted a career-high 83.0 overall grade in his first season in Miami — 14th among wide receivers with at least 35 targets in 2018. He was on pace to have a breakout year and will surely look to pick up where he left off this upcoming season.

The Dolphins have plenty of questions to answer this upcoming season. If Wilson’s healthy, he shouldn’t be one of them.

PFF Analyst Mike Renner took a closer look at the best offseason moves of 2018, and it should come as no surprise that Wilson cracked the list.

Despite missing the second half of the season, Wilson still recorded the best yards after the catch per reception average (13.3) of any wide receiver with at least 35 targets. D.J. Moore and Dante Pettis finished tied for second with a 7.9 average, which only highlights the level of separation between Wilson and the rest of league’s wide receivers last season.

But this isn’t anything new for Wilson. The 5-foot-9, 186-pound receiver posted the second-best yards after the catch per reception average (7.5) in his final season with the Kansas City Chiefs. He has great vision and balance in the open field and is one of the league’s best receivers in terms of broken tackles. 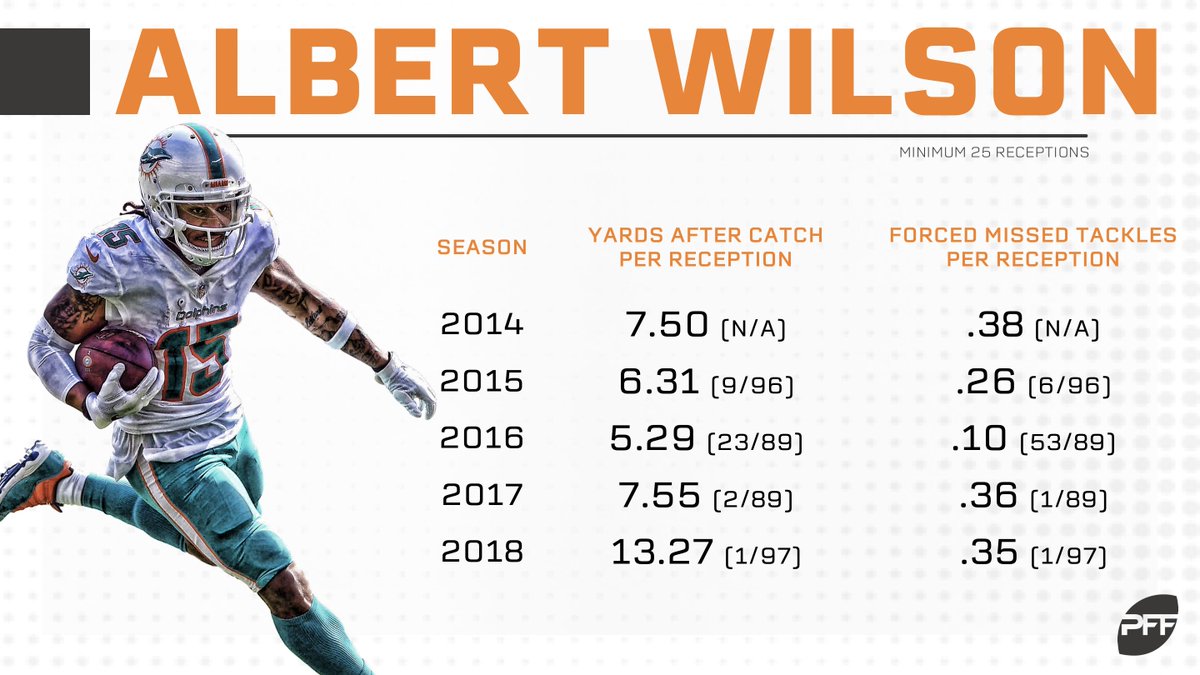 However, his season-ending hip injury last season and a star-studded cast in Kansas City left Wilson as one of the most overlooked talents at the wide receiver position. He can make plays all over the field and displayed plenty of potential as one of the league’s best young slot receivers in 2018.

The Dolphins should look to utilize Wilson’s strengths by finding ways to get him the ball in space. His ability to shake defenders has helped put him in an elite class of wide receivers. His 2.21 yards per route run from the slot over the last two seasons ranks sixth among 94 qualifying wide receivers. Only Michael Thomas, Tyreek Hill, Antonio Brown, Davante Adams and Green have recorded a higher mark.

Wilson will have a new quarterback under center throwing him the ball in 2019. Ryan Fitzpatrick is currently leading Josh Rosen in the Dolphins’ quarterback battle, according to ESPN’s Cameron Wolfe.

That could mean big things for Wilson this upcoming season, especially given Fitzpatrick’s rate of targeting slot receivers. Since 2009, no quarterback with at least 600 pass attempts has targeted wide receivers running routes from the slot more than Fitzpatrick. 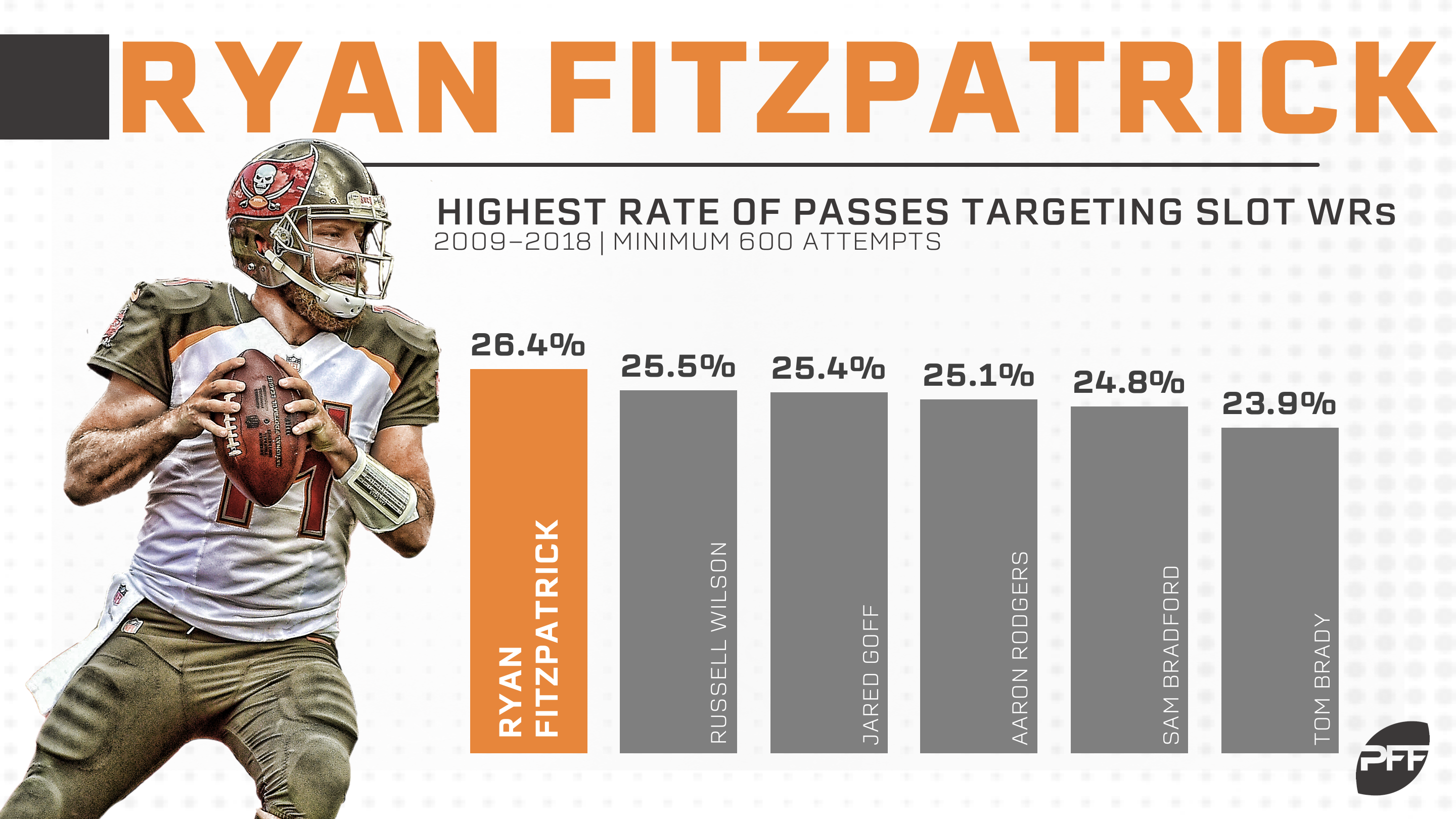 The question will be whether Fitzpatrick can hold onto the job for the entire season? The 36-year-old has not started a full 16-game slate since 2015 and is unlikely to be a long-term solution in Miami.

The Dolphins should want to see what they have in their second-year quarterback, Rosen. Miami acquired the former UCLA Bruin through a trade with the Arizona Cardinals during the 2019 NFL Draft. The former first-round pick earned a 49.1 overall grade in his rookie season, but much like Fitzpatrick, he also has a high frequency of targeting slot wide receivers.

Of Rosen’s 393 pass attempts in 2018, 28% were thrown to wide receivers running routes from the slot position. It’s obviously a smaller sample size than Fitzpatrick, but worth noting given Wilson’s success rate in the slot.

Either way, the Dolphins will need to get the ball in their playmaker’s hands. Wilson can create offense from the slot, on the outside, and behind the line of scrimmage.

If Wilson can stay healthy, he should be primed to finish the breakout season he started last year.