How Pittsburgh's O-line is driving the Steelers' playoff push

PITTSBURGH, PA - OCTOBER 02: Alejandro Villanueva #78 of the Pittsburgh Steelers in action against Tamba Hali #91 of the Kansas City Chiefs during the game at Heinz Field on October 2, 2016 in Pittsburgh, Pennsylvania. (Photo by Justin K. Aller/Getty Images)

They won’t get much of the ink when it comes to game previews, but some of the most important units heading into Conference Championship weekend are the offensive lines of the remaining teams. In fact, all four of the teams still in playoff contention feature top-10 ranked offensive lines this season.

We saw the Seattle Seahawks falter this weekend largely because of the performance of a unit that they have dedicated next to no resources to, while the offensive lines that are still in the hunt have all been integral to the success, or at least improvement, their team has seen this season, rather than a hindrance.

Atlanta’s giant leap forward owes much to the team's offensive line, enabling QB Matt Ryan to produce an MVP-caliber season and giving the team a much-improved foundation for the running game. Meanwhile, Tom Brady’s job has been made much easier by a New England offensive line that no longer needs to be actively propped up by his work within the pocket.

Green Bay boasts the league’s best pass-blocking unit, which allows Aaron Rodgers to do some of the crazy Aaron Rodgers-type things that only he is capable of, and the Steelers have put together one of the league’s best units up front, which is suddenly not only without a weakness, but playing its best football entering Conference Championship weekend.

Pittsburgh has first-round picks invested in its line in the form of center Maurkice Pouncey and right guard David DeCastro, but the Steelers also have undrafted free agents like Ramon Foster, and a player in Alejandro Villanueva—who was once a wideout at Army—playing left tackle and protecting the blind side of QB Ben Roethlisberger. 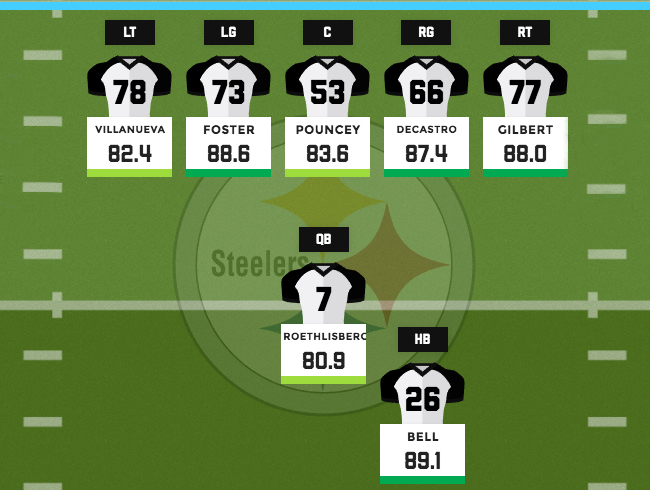 Villanueva is perhaps the most compelling story on the line, not just because of the Army and WR background, but because he was the last problem position on the line as recently as the beginning of the season. Villanueva has surrendered six sacks this year—five of them came in the first six games of the season. 26 of the 46 total QB pressures (56.5 percent) he has allowed (including the playoffs) also came in those first six games, and five of his eight penalties on the year came in that span. In his past four outings, however, he had two perfect games in pass protection, including Sunday night's matchup against Kansas City, where he didn’t allow any pressure across 32 pass-blocking snaps.

Villanueva has also dramatically improved his run blocking, and hasn’t had a bad game in that regard since the first half of the season.

Last year, Villanueva was PFF's 48th-ranked offensive tackle, earning a grade of 47.5. This season, however, he has earned an 82.4 mark, good enough for 23rd, and that figure is still being weighed down by a relatively poor first half of the season. From Week 11 onwards, Villanueva was the sixth-best tackle in the game over the regular season, and including the playoffs, jumps to No. 1 overall.

The one player not yet mentioned from the Pittsburgh line is RT Marcus Gilbert, who has had a similar, though less dramatic, second half surge as Villanueva. Gilbert has been playing consistently well over the second half of the season, with strong games every week since the midway point of the year.

The Steelers like to use those powerful offensive linemen to open up holes in the run game, relying on a steady stream of inside zone and man blocking up the middle, but they also mix it up with power, counter and outside zone plays for one of the league’s most versatile rushing attacks. Le’Veon Bell’s ability to run with patience and make the play work regardless of how it’s developing certainly helps, but he has enjoyed some excellent blocking this season, too.

Roethlisberger has been in the middle of the pack when it comes to holding onto the football this year, averaging 2.49 seconds per attempt, 16th in the NFL. The Pittsburgh offensive line allowed just 133 total QB pressures over the regular season, and only six more across two playoff games, for the third-best pass blocking efficiency score in the league (84.0) behind only Green Bay and Oakland.

It’s certainly possible to win without a top offensive line—the Seahawks have done incredibly well in recent years with an offensive line that has been getting progressively worse, ending this season with the worst-ranked O-line in the game—but there is no doubt that a solid unit up front makes everything a team wants to do on offense easier.

Pittsburgh has had a decent line for awhile now, but this season, it has taken a big step forward and become elite. As much as the play of Bell or other contributors on offense may seem like the driving force behind this run of wins, the offensive line’s step up in performance has been the catalyst for the Steelers' success.