PITTSBURGH, PA - DECEMBER 6: Antonio Brown #84 of the Pittsburgh Steelers celebrates a touchdown in the second quarter of the game against the Indianapolis Colts at Heinz Field on December 6, 2015 in Pittsburgh, Pennsylvania. (Photo by Justin Aller/Getty Images)

At the midway point of the 2017 NFL season, PFF Analyst Bryson Vesnaver gives his take on the league's top graded pass catchers from the wide receiver position. The top spot in which has been held by Pittsburgh Steelers WR Antonio Brown for some time now this season. 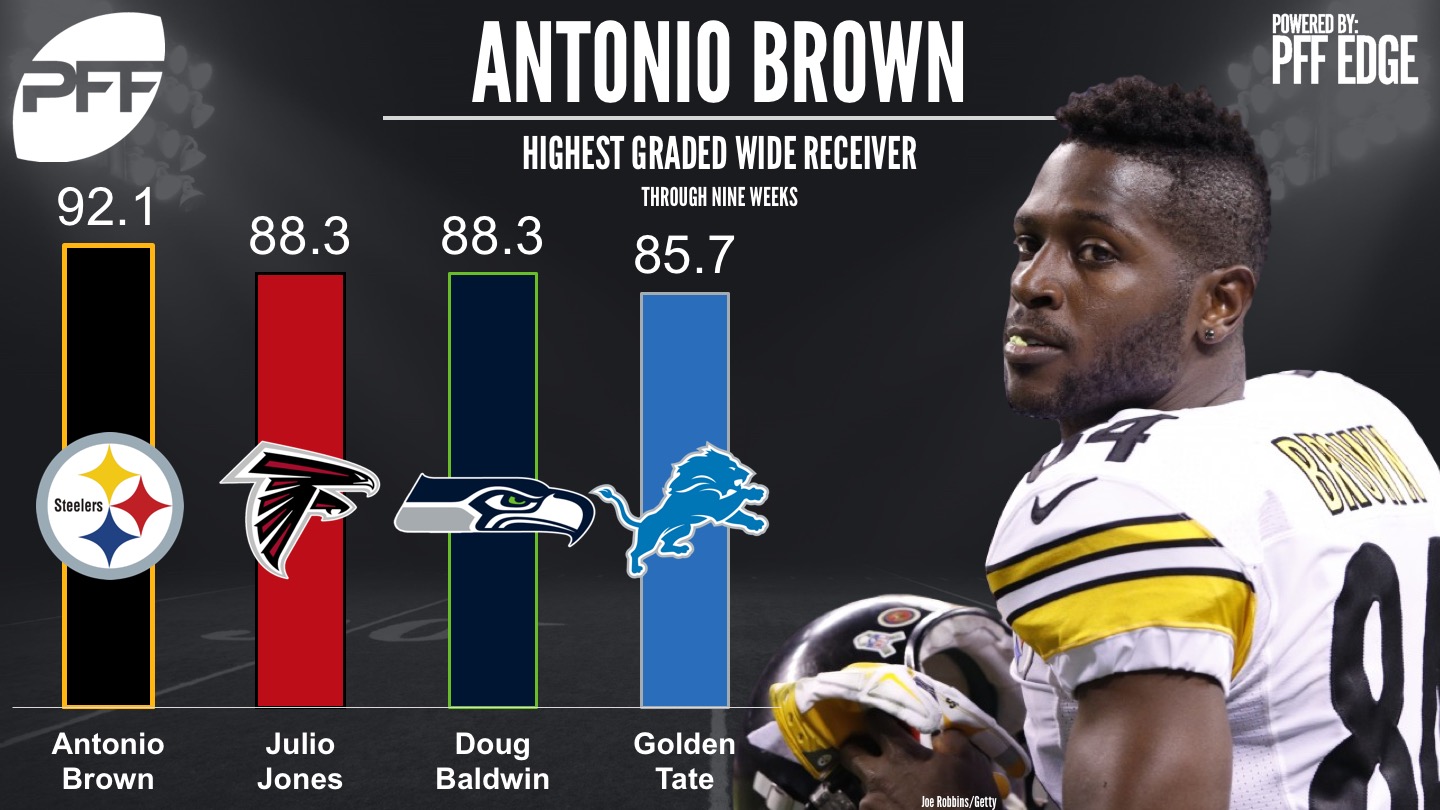 PFF Elite Stat: Brown is averaging 2.97 yards per route run this season, which ranks first among all receivers.

No change at the top for Brown, although his grade dropped slightly after his Week 8 game (he had a bye in Week 9). In that game, he caught five passes on nine targets for 70 yards. That those numbers are considered an off game for Brown shows just how high his level of play has been. Brown still has not dropped a pass this season despite leading the league with 57 catchable targets. His threat rate (percent of time targeted on any aimed pass) of 35.6 percent is the second-highest in the NFL.

PFF Elite Stat: Jones has a yards per route run average of 2.94 this season, ranking second among all NFL receivers.

Although Jones dropped an easy touchdown last week that could’ve won Atlanta the game, he has still played impressively over the past two weeks. He had a ridiculous 21.7 ADot (average depth of target) in that span, the third-highest among receivers with at least 10 targets over those two games. This season, Jones has turned 72.1 percent of his catches into either a first down or a touchdown. While his numbers may not be where people expected them to be, his level is play is.

PFF Elite Stat: Baldwin has yet to drop a pass this season, and his 49 catchable targets are the second-most among receivers without a dropped pass.

Baldwin vaulted himself back up to the top echelon of receivers these past two weeks in which he caught 13 passes for 162 yards and a touchdown while forcing two missed tackles. Few players are better out of the slot than Baldwin, who has a third-best 29 catches from that position this season. But when he lines up wide is where teams need to look out for him most. He averages 2.46 yards per route run from the outside compared to just 1.67 from the slot.

PFF Elite Stat: Tate has forced 15 missed tackles so far this season, the most by any NFL receiver.

Tate is arguably the most elusive receiver in the NFL and he’s been proving it again this season. He leads the league in missed tackles forced and that’s not just a volume stat. He forces a missed tackle on 28.3 percent of his receptions, which is the second-highest average among receivers with at least 20 catches. Tate has 562 receiving yards this season, and over 56 percent of them have come after the catch. Only two receivers with at least 20 catches have a higher percentage than Tate.

PFF Elite Stat: Hopkins is averaging 2.26 yards per route run this season, the fifth-most among all receivers.

Nobody has done more in the past two weeks than Hopkins. While much of his damage was done in his eight-catch, 224-yard game against the Seahawks, Hopkins still caught six passes for 86 yards last week despite the lowest-graded quarterback in the league last week throwing him the football. Hopkins has the highest threat rate in the NFL at 36.4 percent. He’s turned an impressive 74.5 percent of his catches into either first downs or touchdowns.

PFF Elite Stat: Green is averaging 2.34 yards per route run this year, which is the third-highest average among all receivers.

It’s been a tough couple of weeks for Green. Two weeks ago he was held to just three catches for 27 yards and a touchdown on seven targets. Then last week he had just one catch for six yards before he was ejected for fighting Jaguars’ cornerback Jalen Ramsey. While Green had an impressive three-week span from Weeks 3-5 (22 catches for 363 yards and three TDs) he’s made just seven catches for 74 yards and a touchdown over the past three. Green still has the fourth-highest threat rate in the NFL at 32.8 percent, so he should get a chance to right the ship moving forward.

Just change Thielen’s name to Mr. Consistent. He’s caught at least five passes in every game he’s played so far this season and last week finally scored his first touchdown. He also dropped his first pass of the season last week, which is why his grade isn’t a bit higher. Only seven players have more receptions than Thielen’s 48, and he’s turned 62.5 percent of those catches into either a first down or a touchdown.

PFF Elite Stat: Diggs has eight deep receptions this season (20-plus yards in the air), tied for the most among all receivers.

It’s a bit strange but overall very interesting that both Diggs and his teammate Thielen not only have the same overall grade, but are both averaging an identical 2.18 yards per route run on the season. After missing a couple of games due to injury, Diggs returned in Week 8 to catch four passes for 27 yards, none of which went for more than 10 yards. That was surprising since through the first four games of the season, 14 of Diggs’ 22 receptions went for more than 10 yards. Coming off a bye week, Diggs should hopefully be back to full strength and possibly get back to where he was at the start of the year.

PFF Elite Stat: Thomas is averaging 2.04 yards per route run this season, the 13th-best mark among all receivers.

Thomas leads the NFL over the past two weeks with 15 receptions, although he’s averaging just 9.5 yards per catch on those receptions. Thomas has been a reliable safety blanket for QB Drew Brees all year, with his 50 catches being the fourth-most in the NFL. Thomas has an ADoT of 9.7 yards, but has still managed to turn 62.0 percent of his receptions into either first downs or touchdowns this year. He’s also dropped just two passes on 52 catchable targets.

PFF Elite Stat: Garcon saw 40 catchable balls this season and caught them all. That’s the third-most among receivers that don’t have a dropped pass.

Garcon won’t stay on this list long after being placed on IR due to injury, but his play thus far this season on a less-than-great San Francisco offense deserves one last mention on this list. Garcon will finish the year with 40 catches for 500 yards (which means he was on pace for 80 catches and 1000 yards) while forcing four missed tackles. He averaged 1.79 yards per route run, and 49ers quarterbacks had a rating of 79.0 when targeting him compared to just 64.6 when targeting any other receiver.