Have the Patriots done enough this offseason to rectify their pass-rush from 2017?

The New England Patriots came a few plays short of a Super Bowl championship in 2017 but despite their playoff run, they finished the 2017 regular season as the league's worst-graded pass-rushing unit. With the offseason dust settled an organized training activities kicking off across the league, we take a look at the Patriots pass-rushing unit from 2017, and whether they've done enough to rectify their woes from a season ago on the defensive front.

The Patriots pass-rush in 2017 graded as the worst in the NFL. Coming into the season, they no longer had Chris Long, Jabaal Sheard or Rob Ninkovich, while Dont'a Hightower was lost for the second half of 2017 due to injury. Those four accounted for 50 percent of the Patriots total pressures in 2016. Trey Flowers stepped up to fill the void the best he could, finishing with the 16th-best pass-rushing grade among edge defenders. However, opposite Flowers, the Patriots were forced to rely on a revolving door of rookies, street free agents and journeymen veterans. Their average time to pressure of 2.63 seconds was dead last in the NFL, and it wasn't even all that close. The Patriots got worse in quick pressure percentage, with 18 percent which ranked 31st, and their total pressure percentage of 33 percent ranked 25th. These issues were none more glaring than in the Super Bowl versus the Eagles, where Nick Foles was under pressure just 30 percent of his dropbacks and none of those pressures converted into sacks.

Despite the struggles as a whole, there were a few bright spots which may provide some hope for improvement in 2018. Flowers had a huge jump in his production as his 10.4 pass-rush productivity ranked 14th of all 4-3 defensive ends, a big jump up from his 7.9 PRP in 2016. Flowers, who tied for the most quarterback hits of all edge rushers in 2017, could continue to improve even further as he is really entering his third full season after missing most of his rookie year with injury. 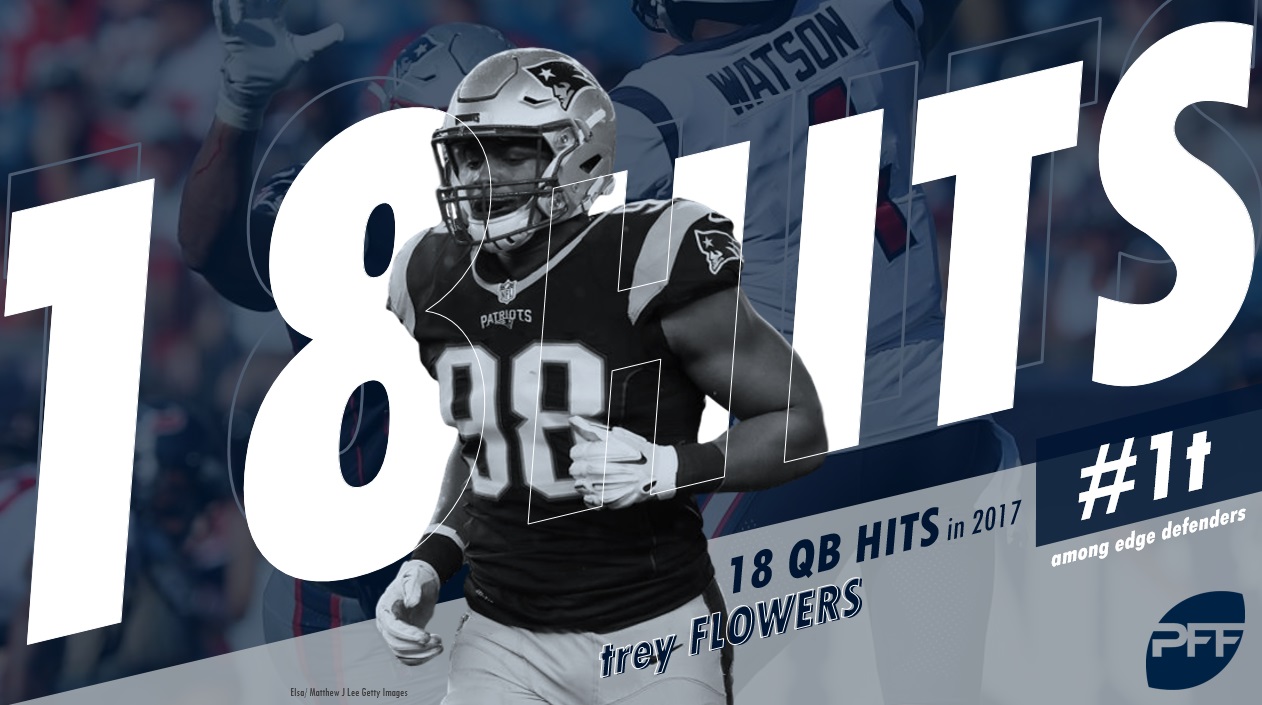 Deatrich Wise was another fourth-round pick in the Flowers mold, who's 37 total pressures tied with Myles Garrett and Derek Barnett for the most pressures of all rookie 4-3 defensive ends. Rookie free agent addition Adam Butler led all rookie defensive tackles with 24 total pressures.

Through the first seven weeks of 2017, Hightower saw about 70 percent of his snaps on the edge, more than any season previous. He took advantage, posting an impressive 14.6 pass-rush productivity rate, which ranked third among 3-4 OLBs through Week 7.

Only one returning defender from the 2017 roster boasted a pass-rush grade of over 70.0, and that is Flowers, however the 2018 unit will see some fresh faces looking to improve the production. A big free agent addition to this roster is defensive end Adrian Clayborn. He finished 2017 with the 14th-best pass-rushing grade of all edge defenders, two spots ahead of Flowers. Clayborn's 10.9 pass-rush productivity rate ranked 11th of 4-3 defensive ends. However, his career-high grade was heavily aided by a single game effort in Week 10 against Dallas, where he had 12 total pressures including six sacks. Before 2017, Clayborn hadn't posted a pas- rush grade in the 80.0s since his rookie season (82.8) in 2011. 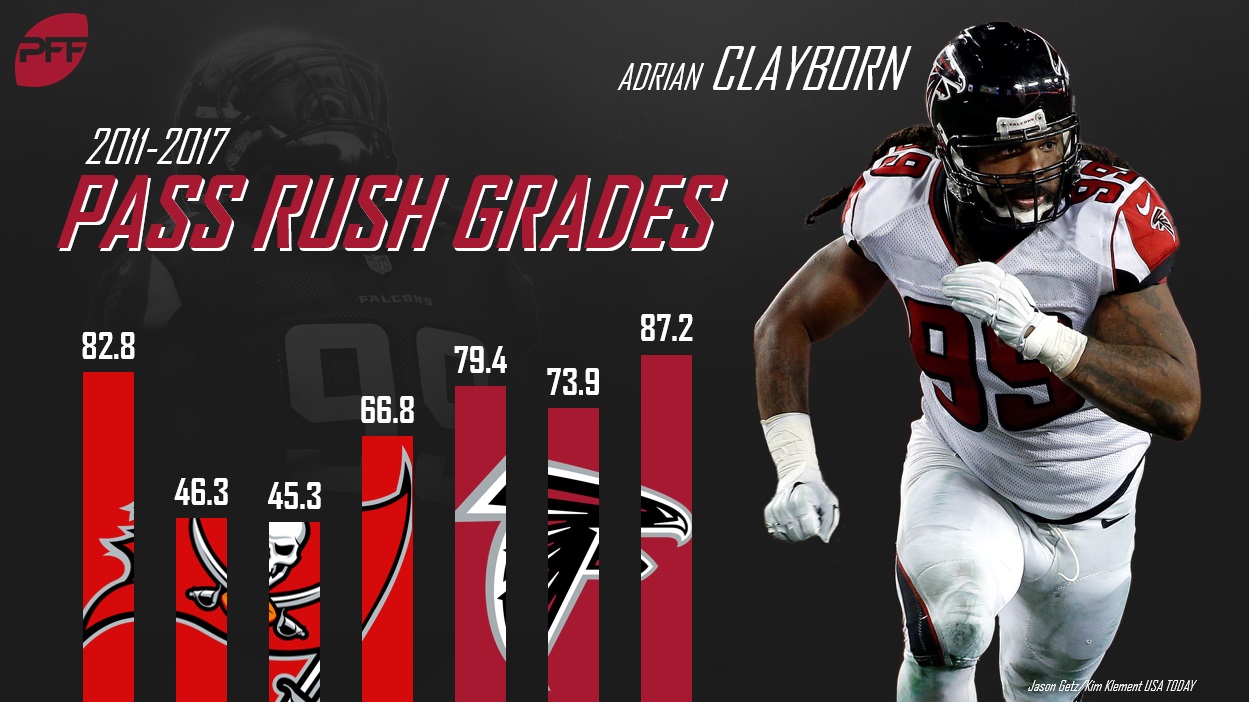 The Patriots acquired interior defender Danny Shelton this offseason for a swap of draft picks from the Cleveland Browns. In Cleveland, Shelton didn't show much as a pass-rusher. Shelton had just six pressures in 2017 on 172 pass-rushing snaps. His pass-rush productivity of 2.6 ranked 62nd out of 71 qualified defensive tackles. Shelton showed the ability to disrupt in college at Washington, which has translated well when it comes to stopping the run, but as a pass-rusher he's been a non-factor.

Derek Rivers, a third-round pick in 2017, made it through just 36 snaps of preseason action before his season ended. It remains to be seen how well the FCS product from Youngstown State will translate his skills to the NFL level. Rivers was dominant in the FCS Championship game, recording two sacks, a hit and six hurries and he also held his own in the East-West Shrine game finishing with a sack, hit and hurry on just 14 pass-rushes. Rivers was PFF's 17th ranked edge defender in the 2017 draft class.

The Patriots style of defense tends not to lead to league-leading pass-rushing prowess. However, the lack of disruption quarterbacks faced was even more apparent in 2017, and something that must improve in 2018. Due to lack of pass-rush production, we saw the Patriots increase the percentage of stunts ran at 33 percent (eighth-most), as well as blitz percentage at 28 percent (16th).

Flowers is a known commodity at this point and should only get better. The key will be getting production around him as well. The chances of Clayborn having a repeat performance of his career year are low, but he should at least provide stability on the edge opposite Flowers. Behind them, a rotation Rivers and Wise provides hope and promise, a healthy Hightower will go a long way as well but obviously, the first order of business is keeping the unit as healthy as possible.

A nice mix of proven veterans, along with the group of up and coming young players should see this unit improve from last season. They likely will not rank among the league's elite pass-rushing units, but there is enough talent on this team that just a decent improvement will be huge for their 2018 outlook. After all, there is nowhere to go but up!