NFL training camp is one of the most compelling elements of the season as players report, but for those players and teams, it can be a different narrative. The New York Giants have fallen victim to a wide array of incidents centered on their once-promising receiving corps. The fallout of these happenings will likely affect the progression of 2019 first-round pick Daniel Jones if the young pass-catchers on the roster fail to step-up.

Fortunately, the Giants have a bevy of talented young route-runners who have played alongside Beckham Jr. Unfortunately, a majority of the players likely will not see the field in Week 1. 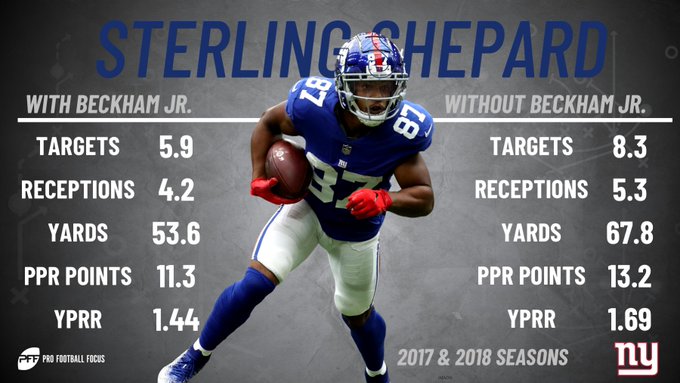 Sterling Shepard, the recent recipient of a four-year, $41 million extension, is now sidelined with a thumb injury sustained in practice but is still targeting an early-season return. Shepard has amassed 2,349 yards (three straight 700-plus yard seasons) and 297 total targets throughout his three-year stint with the Giants. The Oklahoma alumnus also leads the Giants in contested catches (50) in that timespan, admittedly a promising trait to possess with a first-year quarterback potentially at the helm. The earlier Shepard returns, the smoother the Giants’ offense will run, as PFF projected him to earn 831.7 receiving yards before the injury.

With no shortage of misfortune, New York’s largest offseason acquisition, Golden Tate, has been suspended for four games by the NFL for violating the leagues’ performance-enhancing drug policy. After signing a four-year, 37.5-million-dollar contract with the Giants, Tate was undoubtedly the most decorated pass-catcher on the roster. The former Philadelphia Eagle and Detroit Lion leads all NFL players with 173 forced missed tackles on receptions in the PFF Era (2006-present). From the slot, he’s being targeted on average just 6.9 yards past the line of scrimmage, yet he averages 11.2 yards per reception, meaning he’s doing a lot of the dirty work after the catch. Tate will work to appeal his suspension as the season approaches.

After hoping for a career rejuvenation with New York, 2016 first-round pick Corey Coleman is now out for the year with an ACL injury. As a result of these occurrences, Cody Latimer and Bennie Fowler have received extensive first-team looks the past few days of training camp, per ESPN. The pair both played in Denver before linking up with the Giants in 2018, but have only one 30-plus target season to show between them (Fowler, 54 targets DEN 2017). If you combine the two receivers' average yards per route run (2.14), it fails to add up to Beckham Jr’s 2018 mark of 2.18. 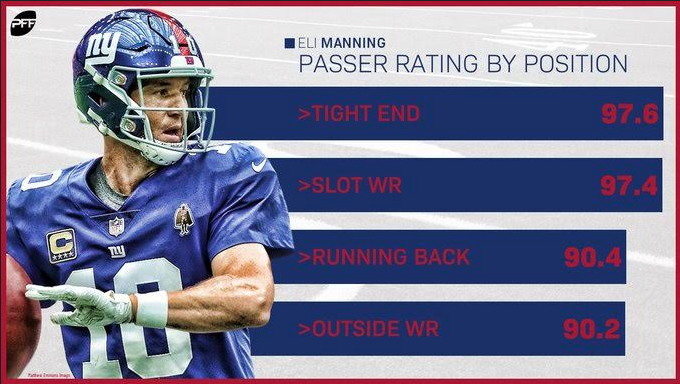 There is a legitimate chance that the most skilled pass-catchers entering the season are a running back and a tight end. The team will likely lean on running back Saquon Barkley and tight end Evan Engram to shoulder the load as a result of the depleted wide receiver position group.

Giants quarterback Eli Manning earned a higher passer rating when targeting tight ends (97.6) and running backs (90.4) than outside wide receivers (90.2). Barkley saw the second-most targets (118) as well as the second-highest receiving grade (86.3) in 2018. Although PFF labeled Engram as having the most challenging fantasy schedule for a tight end he will have to contribute in the earlier portion of the season significantly if the Giants hope to have any resemblance of a skilled passing attack.