Go heavy or spread them out? NFL’s two best run-blocking teams getting it done differently

Running back talk is provocative nowadays. It gets the people going. Statements like, “Todd Gurley should win MVP” are sure to generate strong opinions on both sides. Our own Eric Eager recently did an excellent job of laying out why Gurley, nor any running back, is the most valuable player in the NFL. Part of the reason why is that their success as a runner is tied very closely to the effectiveness of the men blocking for them. Gurley, or any other running back, can only do so much if they are constantly being met by defenders in the backfield, i.e. 2016 Gurley.

That being said, any team in the NFL that is looking to have success running the ball is best suited to acquire successful run blockers and build from there. Currently, the two best teams in terms of PFF team run-blocking grades are the Los Angeles Rams and the San Francisco 49ers with grades of 78.7 and 73.4, respectively. The interesting thing about those two teams residing on top is that they sit on the extremes as far as how often they run the ball out of personnel groups that contain three or four wide receivers.

Taking out plays such as end-arounds, reverses, quarterback sneaks, etc., the Rams have run the ball a league-high 211 times out of formations with three or more wide receivers. Gurley has run 100 percent of his attempts out of ‘11’ personnel with three wide receivers, one tight end and one running back (Gurley) on the field.

To put in perspective just how unique that is, Gurley has recorded all 181 of his rushing attempts, excluding his jet sweep, on plays with three or more wide receivers on the field.  The running back closest to him through Week 9 in such attempts is James Conner with 82. Not only is he running more in three or four wide receiver looks, but he has nearly 100 more attempts than anyone else. 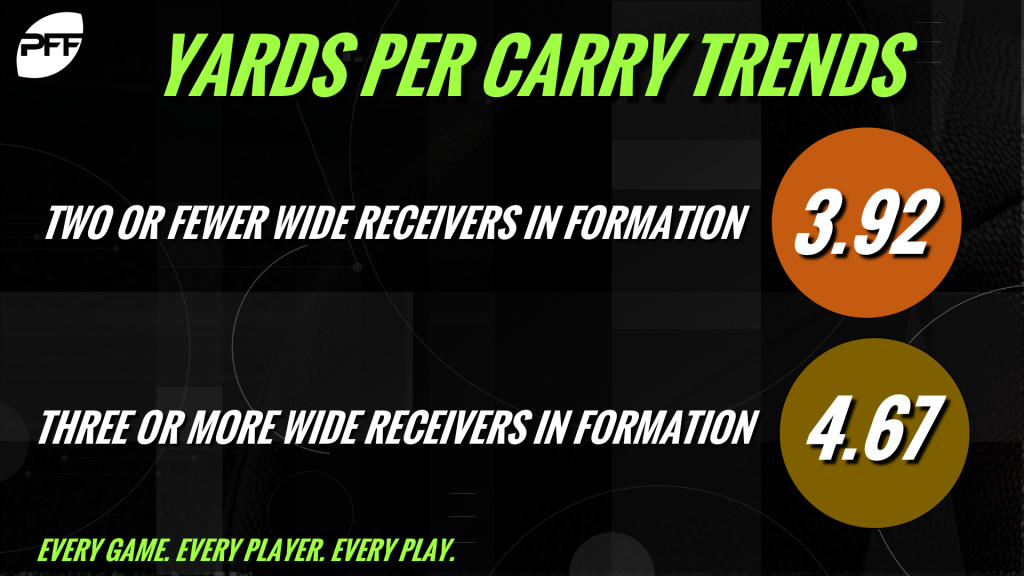 Running the ball isn’t a big mover of the needle and is significantly less important than being able to effectively pass the football, but the Rams appear to have found an edge in running the ball. They are doing so efficiently this season behind the top run-blocking unit in the league.

The 49ers, on the other hand, have run just 37 times out of formations with three or more wide receivers on the field. That is the fewest in the NFL by over 20 plays. And yet, there they sit with the third-most team rushing yards per game and the second-best PFF team run-blocking grade in the NFL. Why do they run so few plays with two wide receivers on the field? Kyle Juszczyk.

The fullback is a dying breed in the NFL, but Juszczyk is one of the few exceptions who finds himself on the field often on offense. He has seen 364 offensive snaps for the 49ers this season; no other fullback has played over 200. He’s shown himself to be an effective run-blocker with only Zach Line of the New Orleans Saints having a better run-blocking grade at the position this season. He joins the budding star George Kittle at tight end, who, along with his success as a receiver, has been a very good run-blocker. Kittle’s run-blocking grade of 72.7 ranks in the top-five of tight ends this season.

With those two lining up so often on runs, there is hardly ever room for three wide receivers on the field. It’s a different strategy than what the Rams have employed on rushing attempts, but it’s been working. Matt Breida is averaging 5.65 yards per carry on the second-most attempts with two or fewer wide receivers on the field, and Raheem Mostert is averaging 8.41 yards per carry on such runs, which is the most among any runner with at least 25 attempts.

Despite the spread looks generating more success league-wide overall, there are some other top running backs that have been more successful with an extra tight end or fullback on the field. One such running back is Ezekiel Elliott, who has averaged 3.9 yards per rush with three wide receivers on the field and 5.4 yards per attempt with two or fewer. Another similar case among one of the league’s leading rushers is Melvin Gordon III. Gordon sits just below Mostert with 6.0 yards per carry in heavier looks compared to 4.6 yards per carry with three-plus wideouts.

The Rams are finding an edge by reducing stacked boxes and letting Gurley run into space behind one of the elite offensive lines in the league, but what the 49ers, Los Angeles Chargers and Dallas Cowboys have shown is that extra blockers are effective as well when used correctly. The top-two teams in the league in terms of run-blocking grade do it out of different formations, but they do it well. Moving forward, it will be interesting to see if more teams follow the Rams’ lead and run the ball at a high rate out of ’11’ personnel.