It’s safe to say that things did not go according to plan for the Buffalo Bills at the cornerback spot opposite Tre’Davious White in 2018. General manager Brandon Beane signed veteran corner Vontae Davis to a one-year contract that offseason — and Davis played a total of 29 snaps before retiring halfway through the team’s Week 2 loss to the Los Angeles Chargers.

The position was thrown into chaos after that, with three different players getting starts opposite White, but that was before undrafted rookie Levi Wallace stepped in and took the position starting in Week 10. The first-year player out of Alabama not only held his own but performed well from then on, earning an 85.3 coverage grade in eight games while allowing only 94 total yards on 19 targets. Wallace finished the season allowing 0.45 yards per coverage snap which ranked first among all corners who played at least 135 snaps, and he was the third-highest graded corner in the NFL during the season's final seven-game stretch.

Despite that, Beane did not leave himself thin at the position again this offseason. While he did not draft a corner this spring, the Bills opted to bring in low-cost, high-upside veterans to compete with Wallace and add depth to the secondary. 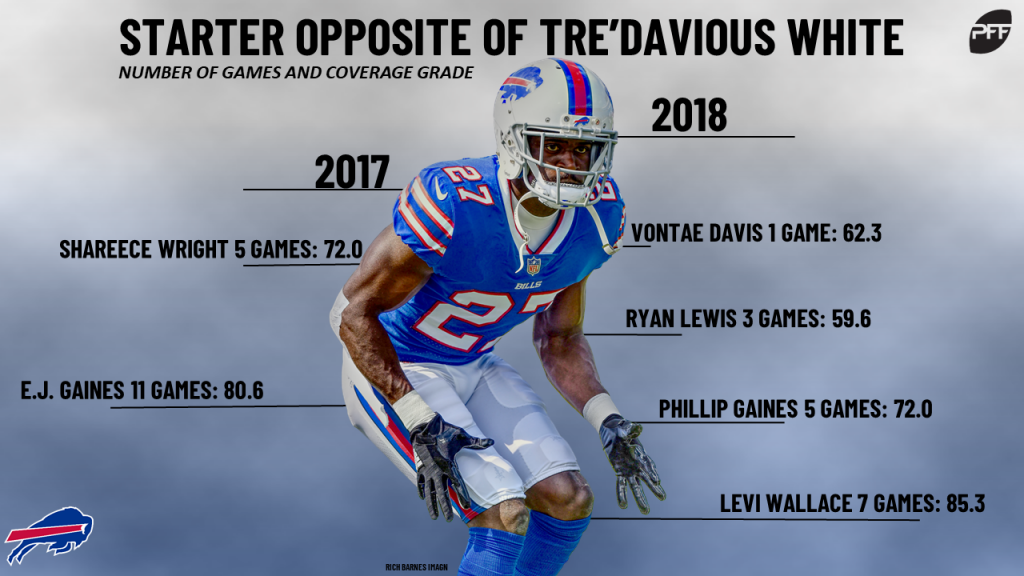 The former first-round pick of the Houston Texans has had an injury-marred career, to say the least. He suffered a stress fracture in his foot his rookie year, and he earned a subpar coverage grade of 59.1 playing through it. However, the next season was a much better one, one that saw him post an 80.9 coverage grade through the season's first six games. Unfortunately, Johnson broke the same foot that he previously injured and he was unable to carry on from his excellent start.

It’s a long shot, but if Johnson can stay healthy, he can at the very least provide quality depth for the Bills. In 2016, Johnson was the seventh-highest graded cornerback through the season's first six games. He had four pass-breakups during that time, and he allowed a passer rating of just 68.8 on throws into his primary coverage. It’s a very small sample size, but in spots, he's shown that he has the pedigree worthy of a one-year prove-it deal. 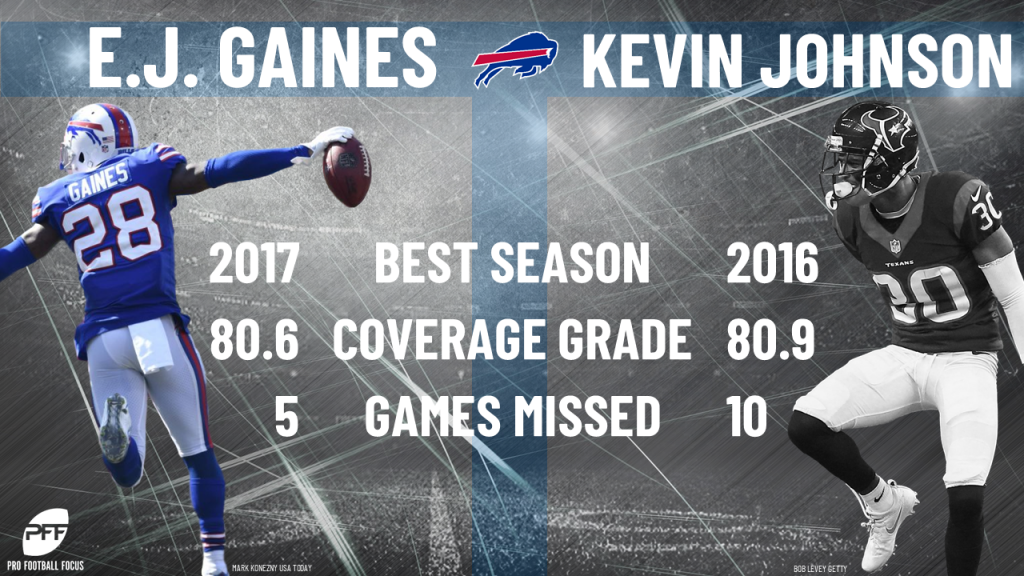 Gaines is a familiar face for the Bills. The former sixth-round pick had the best season of his career in 2017 while in Buffalo, posting an 80.6 coverage grade that ranked 17th among cornerbacks with at least 225 defensive snaps. He also only allowed 0.77 yards per coverage snap that year, which was good for ninth among players at the position.

Gaines tried to parlay all of that success into a payday last offseason. He only managed a one-year prove-it deal with the Cleveland Browns, but a training camp injury limited him to four games and a coverage grade of 62.5 — far below his 2017 numbers.

Gaines is another boom or bust signing for the Bills, having never played a full season in the NFL. Even in his best year with Buffalo, he was in and out of the lineup and only started 11 games. The closest he’s come to a full season was his rookie year, where he played a career-high 561 coverage snaps and earned a 70.3 coverage grade.

In total, 12 different corners have logged snaps at outside cornerback opposite Tre’Davious White over the last two seasons in Buffalo. The team has a promising, young option in Levi Wallace, but the side made it clear that it wants depth and competition at that position. If either Gaines or Johnson can stay healthy, the Bills have a promising mix of options to start in 2019.