Veteran back Lamar Miller went down in the Houston Texans’ Saturday night preseason bout with the Dallas Cowboys after suffering a gruesome hit to his lower left leg early in the contest. Per NFL’s Ian Rapoport, Miller suffered a torn ACL, ending his 2019 season before it ever started.

With Miller expected to spend the year on the Injured Reserve, the spotlight shifts to new Texans running back Duke Johnson Jr., who was acquired via trade from the Cleveland Browns earlier this month. The 5-foot-9, 210-pound Miami (Fla.) product has recorded 3,456 yards and 13 total touchdowns in his four years – as a severely underutilized back – in the league.

Johnson is a freaky elusive and efficient back with great receiving ability. Among the 69 NFL backs with 300 or more touches (rush attempts + receptions) over the past four seasons (2015-18), Johnson ranks first in forced missed tackles per touch (0.26), fifth in yards per touch (6.47) and third in combined first downs and touchdowns per touch percentage (35%).

Targeted 304 times in his career, Johnson has earned a 90.9 receiving grade which ranks fifth among all NFL backs with at least 50 targets in the past four years. He also ranks tied for eighth in yards per route run (1.73) and 19th among the same group of backs. 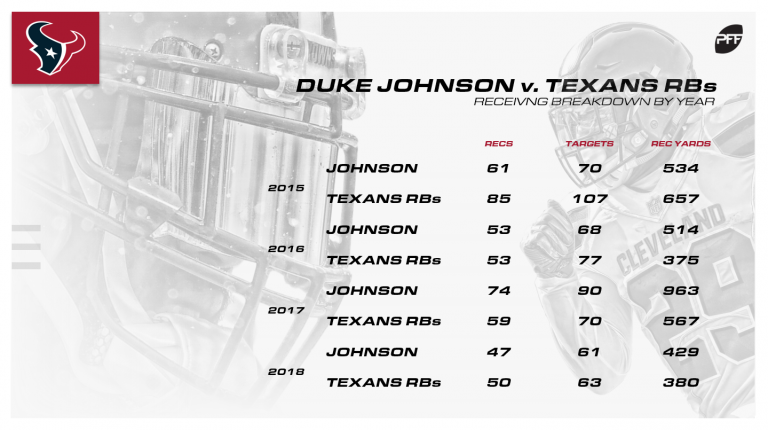 Johnson’s positional versatility in the passing game is among the best in football, as well. He excels when asked to run routes away from the backfield (e.g. slot receiver, wide receiver). He’s earned a top-10 receiving grade across 320 routes run away from the backfield in his career, catching 41-of-65 targets for 493 yards, 18 first downs and four touchdowns in the process.

And while some are quick to say he can’t replace Miller’s production on the ground, Johnson has proven more than capable of producing at a high level running in between and outside the tackles throughout his career. Johnson’s 4.8 yards per carry average on runs between the tackles ranks tied for eighth among the 91 NFL backs with 100 or more carries inside the tackles since 2015. And Johnson has earned positive Expected Points Added (EPA) on a whopping 42.5% of his carries in his career, ranking inside the top-20 among qualifiers at his position.

Johnson’s rare combination of receiving ability and plus production on the ground make him a perfect candidate for modern bell-cow role in the NFL – a heavy workload favoring targets similar to Christian McCaffrey, Alvin Kamara, etc.