The kickoff to the second week of the 2019 preseason is just mere hours away, and players leaguewide will be gearing up to try and make an impact in their respective games. And while the first week gave us a number of strong performances, we also saw our fair share of disappointing ones, so the second week becomes all the more important for the players who wish to right those wrongs and get back on track.

As we did earlier today focusing on the offensive side of the ball, below is a list of defensive players who underwhelmed in Week 1, either because they made the familiar mistakes of a first-year player playing in his first game or because they just got off to a slow start for a team that would have likely expected more. It's important to note that we're not saying the sky will fall should these players not shine this weekend. Instead, we're saying that the below players have the chance to ease the minds of their coaches and fans alike should they turn up in a big way in Week 2. 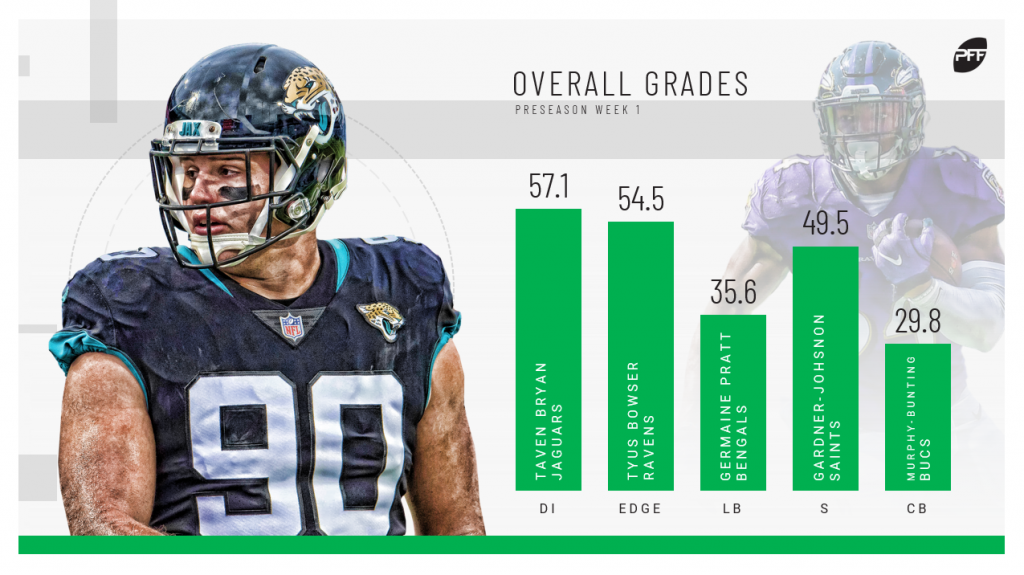 Fans who were hoping to see spectacular things from 2018 first-round pick Taven Bryan were likely left disappointed last year, as the former Gator mustered a good-but-not-great 71.1 overall grade and 60.5 pass-rush grade across only 301 defensive snaps in Year 1.

However, after being used in the edge rotation last year — a tough rotation to crack given that Calais Campbell and Yannick Ngakoue also reside in Jacksonville — Bryan looks like he's set to a move to the defensive interior in Year 2, which could put him in a position to make more of an impact. Bryan logged 34 snaps from an interior defensive alignment last week against the Ravens, the most game action he's ever seen from such a position thus far into his career, and he recorded two pressures from 21 pass-rushing snaps against a decent Ravens offensive line. However, he lost far more matchups than he won on the day and ultimately ended the game with a 57.1 overall grade — tied for 81st among the 109 qualifying interior defensive lineman.

All the tools are there for Bryan, but he's yet to make the kind of impact that's expected of a first-round pick. He now has the chance to turn heads in Week 2 as he gets set to square up against a strong Eagles offensive line.

After the Ravens lost both Za’Darius Smith and Terrell Suggs in the offseason, the battle for snaps among the Ravens’ edge defenders should be a fiercely contested one over the next month. And while Matthew Judon and Pernell McPhee figure to see the majority of the action, Tyus Bowser and the rest of the rotational options still need to make their case this preseason.

Bowser has played just 326 total snaps for the Ravens since he was drafted with the 47th overall pick of the 2017 NFL Draft, and he has earned overall grades of 59.6 and 63.8 in his first two seasons in the league, respectively. Yet to really make his mark as a pass-rusher in Baltimore, he was once again held pressureless last week against the Jaguars and ended the game with a 50.6 pass-rush grade that ranked tied for 173rd among the 184 edge defenders who rushed the passer at least 10 times in Week 1.

With just under a month to go until the start of the 2019 regular season, this coaching staff has to be a little concerned with the side's current, post-Burfict linebacking corps. Slated to play meaningful snaps this year is Jordan Evans, who earned a 38.4 overall grade in 2017 and a 51.9 overall grade in 2018; Preston Brown, who has earned three consecutive sub-61.0 overall grades; and Nick Vigil, who just last year earned a career-high overall grade … of 59.5.

Competing for time in that rotation will be rookie linebacker Germaine Pratt, who turned in the seventh-best overall grade (90.3) among qualifying off-ball linebackers in the draft class last year. So if he can find his feet quickly in the NFL, it'll go along way toward solving what figures to be a real problem for the Bengals' defense. Unfortunately, Pratt got off to a rough start in Week 1 — he allowed a touchdown in coverage, missed a tackle against the run and failed to record a pressure on both of his pass-rush opportunities, all en route to a 35.6 overall grade. He'll look to improve on his debut as he gets set to take on Washington tonight.

Gardner-Johnson's versatility made him one to watch heading into the preseason. With a skill set that's perfectly suited for the slot/safety hybrid role in today’s NFL, he led this draft class with 22 coverage stops in 2018, and at his best, he offers a big-time upgrade to the New Orleans secondary for 2019.

The Florida product will want to show people that he can make a difference on this defense after he lumbered his way to a 49.5 overall grade and a 51.2 coverage grade Week 1 against the Minnesota Vikings. He allowed a 20-yard completion on his only target of the game, yielding a passer rating of 118.8.

The Tampa Bay Buccaneers have struggled at the cornerback position for quite some time now, with draft picks Vernon Hargreaves III, Carlton Davis and M.J. Stewart all trying and failing (so far), to make an impact in coverage.

The path to an expanded role for PFF favorite Sean Murphy-Bunting is clearly visible, and he's proved to be more than capable in coverage during his time in college. Last year, Bunting gave up all of 17 catches on 374 coverage snaps while picking off two passes and breaking up five more.

His debut game was very much one to learn from — he gave up three catches for 77 yards and a touchdown in coverage against the Pittsburgh Steelers, the first time since 2017 that he gave up three catches and a score. He ended the game with an overall grade of 29.8 and a coverage grade of 29.4, so the only way is up for the first-year cornerback out of Central Michigan.