The kickoff to the second week of the 2019 preseason is just mere hours away, and players leaguewide will be gearing up to try and make an impact in their respective games. And while the first week gave us a number of strong performances, we also saw our fair share of disappointing ones, so the second week becomes all the more important for the players who wish to right those wrongs and get back on track.

Below is a list of offensive players who underwhelmed in Week 1, either because they made the familiar mistakes of a first-year player playing in his first game or because they just got off to a slow start for a team that would have likely expected more. It's important to note that we're not saying the sky will fall should these players not shine this weekend. Instead, we're saying that the players below have the chance to ease the minds of their coaches and fans alike should they turn up in a big way in Week 2. 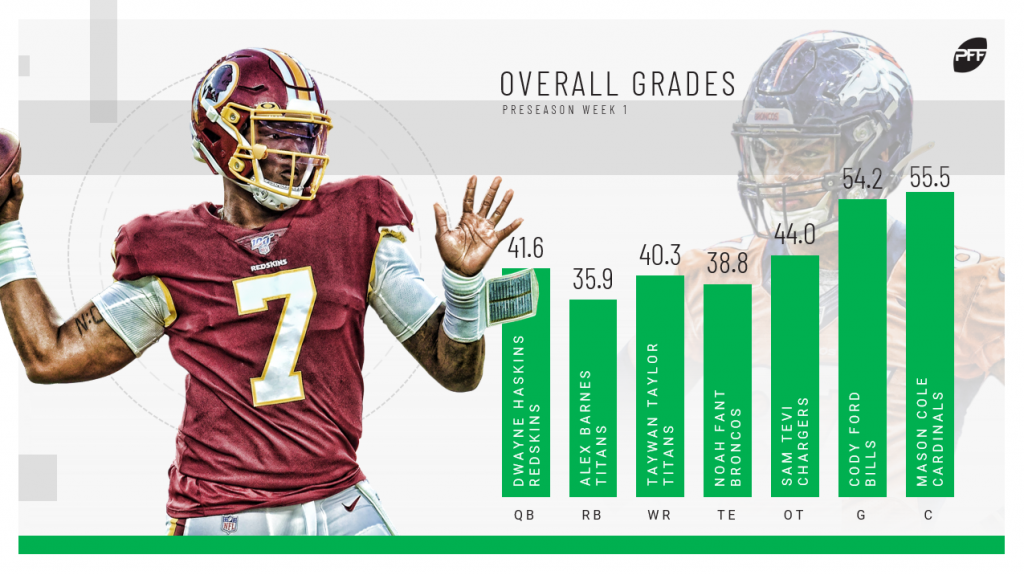 Haskins played 32 offensive snaps in his side's preseason opener against the Cleveland Browns — 21 more snaps than the next closest first-round QB — and with that increased workload came the reasonable expectation that he would make some rookie mistakes — and that he did.

The former Ohio State signal-caller completed 8-of-14 attempts against the Browns, tallying 117 yards and two interceptions. The first pick, an attempt to loft the ball to Byron Marshall on a wheel route, was deservedly taken back the other way for six, and the other was a fairly ugly overthrow down the seam that fell into the grateful arms of fellow rookie Greedy Williams. Haskins' work in Week 1 earned an overall grade of 41.6 and a passing grade of 33.7, 10th and 11th, respectively, among the 11 rookie signal-callers who dropped back to pass at least 10 times in Week 1.

There were several positives among his mistakes, however. Five of Haskins' throws earned a positive grade in our system (he also recorded five negatively graded throws), the best of which came on his first play of the game — a play-action rollout early in the second quarter that found Darvin Kidsy on an out route for a 27-yard gain.

With Colt McCoy out for Week 2, the time should be split evenly between Case Keenum and Haskins, which, again, should mean that Haskins sees extensive playing time. For the rookie signal-caller, it'll be a chance to show that he's learned from the mistakes of Week 1; the name of the game will be limiting those negative, sometimes egregious throws and making more of the positive throws, which is something that he's more than capable of doing. If only it were that easy, right?

The Combine-standout-turned-undrafted-free-agent had been drawing intrigue at training camp, but given that Derrick Henry and Dion Lewis are already cemented to the top of this roster, Barnes' path to the 53-man squad almost entirely depends on him putting up preseason performances that line up with his lofty combine measurements.

To say that Barnes has got off on the wrong foot in this regard would be quite the understatement. On 10 carries against the Philadephia Eagles last week, Barnes recorded just 14 rushing yards. Unable to force a single missed tackle, his' longest run went for just four yards, and he was held for no gain on four occasions. To make matters worse, Barnes also fumbled on his only reception of the game. The Kansas State product ended the game with a 35.9 overall grade, an average of just 1.80 yards after contact per attempt and a 22.5 receiving grade. On the outside looking in, Barnes needs to show up in a big way if he wants to crack this final roster.

Taylor has shown glimpses in his two full years as an NFL receiver and particularly shined over the last five weeks of the 2018 season where he earned a 72.2 receiving grade and averaged 2.29 yards per route run, the 24th- and 11th-best mark among receivers in that span, respectively.

It'll take more than flashes in Year 3, though, as the former Western Kentucky Hilltopper is currently locked in a battle with Tajae Sharpe for No. 4 duties with the team. And if his performance in Week 1 is anything to go by, it's a battle that he's now behind in. Taylor caught just two of his five targets for 16 yards last week against the Eagles and dropped two of his passes in the process. His 40.3 receiving grade and his 27.3 drop grade both ranked dead last among the 41 receivers who saw at least five targets last week, so a bounce-back is a must for the third-year pass-catcher.

The majority of the Broncos' tight end corps is once again queuing at the door of the head trainer. Just last week, the side lost rookie Austin Fort to a season-ending knee injury, while Jake Butt (knee), Jeff Heuermann and Bug Howard are all varying forms of limited. This, of course, means that first-round rookie Noah Fant is in line for more playing time than probably originally planned — and he can use that time to improve upon his disappointing marks so far this preseason.

Fant has earned a 43.1 overall grade and a 50.7 receiving grade across his 28 snaps so far this preseason, logging three catches from five targets (and one drop) for 21 yards and one first down.

The 2018 season will be one that right tackle Sam Tevi will quickly want to forget. Since 2006, there have been 392 instances where a right tackle has logged more than 300 pass-blocking snaps over the course of a single season, and among that list, Tevi’s 13.7% pressure rate and his 92.5 pass-blocking efficiency from last season both rank 392nd.

The Chargers and their talented young roster are primed for a postseason run in 2019, but one of the few things holding them back is their underperforming offensive line, of which Sam Tevi is a part. He showed no signs of any improvement last week against the Cardinals and allowed one hurry on his 20 pass-blocking snaps, extending his streak to 22 straight games (Week 15 of the 2017 season — 14 snaps) where he's allowed at least one pressure. In fact, Tevi has now logged 20 or more pass-blocking snaps in  22 total games (including the preseason and postseason) — he's kept a clean slate in pass protection in just one of them (2017 preseason Week 3 vs. Los Angeles Rams).

Tevi will walk out to take his place in the Week 2 contest on ice that is getting thinner and thinner with each passing week.

Ford's early struggles in his NFL debut could very well be down to the fact that the Bills had him play snaps both at right tackle and right guard — a tricky enough changeup for even the most experienced of players.

Albeit from different positions, Ford played well in both the running game and the passing game in Week 1 of the preseason; his objective for Week 2 is to just do it at the same spot.

Mason Cole, who started all 16 games in place of A.Q. Shipley, struggled mightily in pass protection last season, finishing with a pass-blocking grade of 41.9 while allowing 35 pressures. Now that Shipley is back though, Cole will have to show a marked improvement if he wants to hang on to that starting job.