The first full week of the 2019 NFL preseason is the books, so we at PFF have put together our first NFL Team of the Week to highlight outstanding performances at every position across the league.

Considering that is is the preseason, we considered things like time spent against starters and number of snaps played when forming this week's Team of the Week. 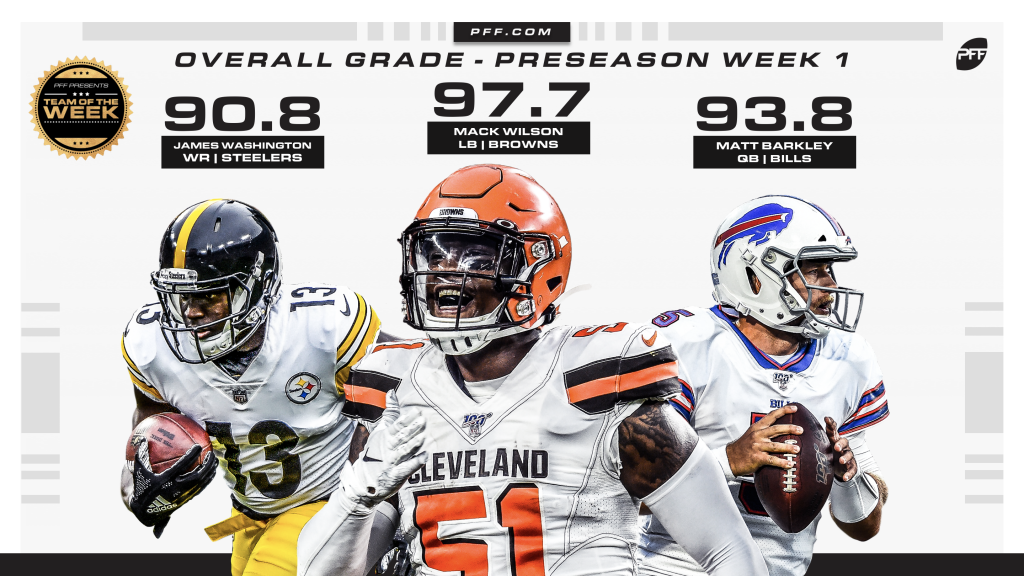 Barkley has produced some solid games in the NFL regular season, so it’s no surprise that he impressed in a preseason game. While he completed nine of his 14 pass attempts, it’s worth noting that three of those incompletions came as a result of dropped passes, giving him an adjusted completion percentage of 85.7%.

Bolden rushed the ball 12 times in the Patriots opening preseason game, picking up just 41 yards for a 3.4 yards per carry average. A whopping 22 of those yards came after contact, however, and he forced three missed tackles on those 12 carries.

Williams made a big impression in the Dolphins' preseason opener, picking up 97 yards on four catches, including an impressive toe-tapper on the left sideline. His 4.85 yards per route run average ranked second among all wide receivers with at least four targets this week.

A forgotten man this offseason by many, Washington made a huge impact in the game and led all wide receivers with at least four targets this week with his 7.00 yards per route run average. He also ranked second with 65 yards on passes of 20-plus air yards, showcasing his ability to create big plays.

Schnell was impressive from the slot for the Buccaneers in their preseason opener, picking up 91 yards on five receptions when lined up inside. That gave him a yards per route run average from the slot average of 4.33, the highest mark among receivers who lined up in the slot at least 15 times.

Officially, Keizer had three receptions for 24 yards, but he also had another reception called back by penalty. Adding some solid work as a run blocker, he stood out on 27 snaps this week.

Boyd saw 29 snaps for the Chiefs in their preseason opener, including 17 in pass protection. Allowing zero sacks, hits and hurries, he also impressed as a run blocker, producing a PFF run-blocking grade of 79.1.

Jerry didn’t allow a sack, hit or hurry from 21 pass-blocking snaps on Saturday night in the Bengals preseason opener. One of the highlights for the team on offense, Jerry joins the Bengals coming off of five straight seasons of PFF offensive grades of 66.0 or higher between 2013 and 2017.

McCray’s primary competition for this spot was actually his teammate Lucas Patrick. Patrick played all 29 of his snaps at center, while McCray split time between there and left guard and was ultimately more impressive. From 11 pass-blocking snaps, McCray didn’t allow a sack, hit or hurry, and he produced a PFF run-blocking grade of 78.3.

McCray is joined on the interior offensive line of the PFF Team of the Week by teammate Anthony Coyle. A 2018 undrafted free agent out of Fordham, Coyle didn’t allow a sack, hit or hurry from 13 pass-blocking snaps this week.

A third-round draft pick out of Oklahoma a year ago, Brown looks likely to man the right tackle spot for the Ravens once again in 2019. He was impressive in their win against the Jacksonville Jaguars, allowing zero sacks, hits or hurries from 22 snaps in pass protection.

The Steelers are featured heavily in the front seven of our defense on this week's Team of the Week, and that starts up front with Mondeaux. Including a quarterback hit nullified by penalty elsewhere on defense, he beat his blocker as a pass-rusher no fewer than seven times – earning him the second-highest pass-rushing grade among players on the defensive interior this week.

Mondeaux's teammate Isaiah Buggs joins him on the Team of the Week after drawing two holding calls, beating his blockers as a pass-rusher on three occasions and coming away with a fumble recovery. An impressive first impression from the sixth-round draft pick out of Alabama.

The Eagles already have the best pass-rush in the NFL according to our grades, and Daeshon Hall showed the potential to add even more depth to that this week. From 19 pass-rushing snaps, Hall registered a sack, three hits, a  hurry and forced a fumble. He also registered four tackles, all resulting in a defensive stop.

It’s back to Pittsburgh again, with undrafted free agent Tuzar Skipper making his presence felt in the preseason opener. He registered a sack and three hits as a pass-rusher and added another tackle resulting in a defensive stop.

The performance of the week by any player in the NFL, and it’s really not that close. Wilson picked up two hurries from three plays where he blitzed, but it was the plays where he dropped into coverage that earn him this spot on the team of the week. Two interceptions, both which were impressive athletically, one of which he brought back for a touchdown. Now that’s how you make an impact.

Our final trip to the Steel City sees sixth-round draft pick out of Akron Ulysees Gilbert III earn his spot on this list. Impressing when used as a blitzer, Gilbert registered two sacks, two hits and a hurry from 12 pass-rushing snaps.

A fifth-round draft pick out of USC, the 91st-ranked player on the final PFF Big Board made an impressive start to his Indianapolis Colts career. On the field for 10 snaps in coverage, Tel didn’t allow a reception despite being targeted twice and also came away with a pass breakup.

On the field for 25 snaps total and 13 in coverage, Peterson was targeted twice and allowed one reception for 19 yards. Coming away with an interception in coverage, he finished the game having allowed an NFL passer rating of 43.8 on throws into his coverage.

A fifth-round selection a year ago, Phillips was on the field for 32 coverage snaps this week. Targeted four times, he allowed just one reception for eight yards and came away with two pass breakups.

The Ravens are deep at safety, but Bennett Jackson is a name to watch throughout August. After drawing rave reviews in training camp, he made an impact in their preseason opener with an interception and two tackles resulting in a defensive stop.

Wilson saw 29 snaps this week and his lone tackle resulted in a defensive stop. It was his playmaking ability that helped him land here, though, coming away with an interception despite only being on the field for 15 coverage snaps.

Kaare Vedvik isn’t likely to unseat Justin Tucker as the Ravens' starting kicker anytime soon, but he does have the opportunity to put himself in the shop window for a trade this preseason. Against the Jaguars, he connected on all four of his field goal attempts, including one from beyond 50 yards.

O’Donnell punted seven times for the Bears this week, booming them for 384 yards, including a long of 60 yards, giving him a 54.9-yard average that led all punters with at least four punts. His average hang-time of 4.65 seconds was tied for ninth among punters in the opening week of preseason action.

This should come as a surprise to nobody, with everyone aware of who Sheehy-Guiseppi is after his story was shared after the Browns' preseason opener. Taking his only punt return to the house was a great way to make the entire NFL take notice.

Hester only saw three special teams snaps this week, all on the field goal/extra point block team, but he came away with a blocked extra point, and that’s good enough for us.