Ultimately, PFF Awards week is about recognizing the top individual accomplishments of the 2017 season, which have been assigned independent of past performances. In the case of the run defender, however, a deeper dive into Damon Harrison’s historical play is warranted.

First, let’s begin with a look at his body of work from this past season. Harrison led the league this year in run stops (40) and run-stop percentage (13.4), and finished tied for fifth with Carolina’s Luke Kuechly with 46 solo tackles against the run, the latter obviously a remarkable feat considering he plays on the defensive interior. 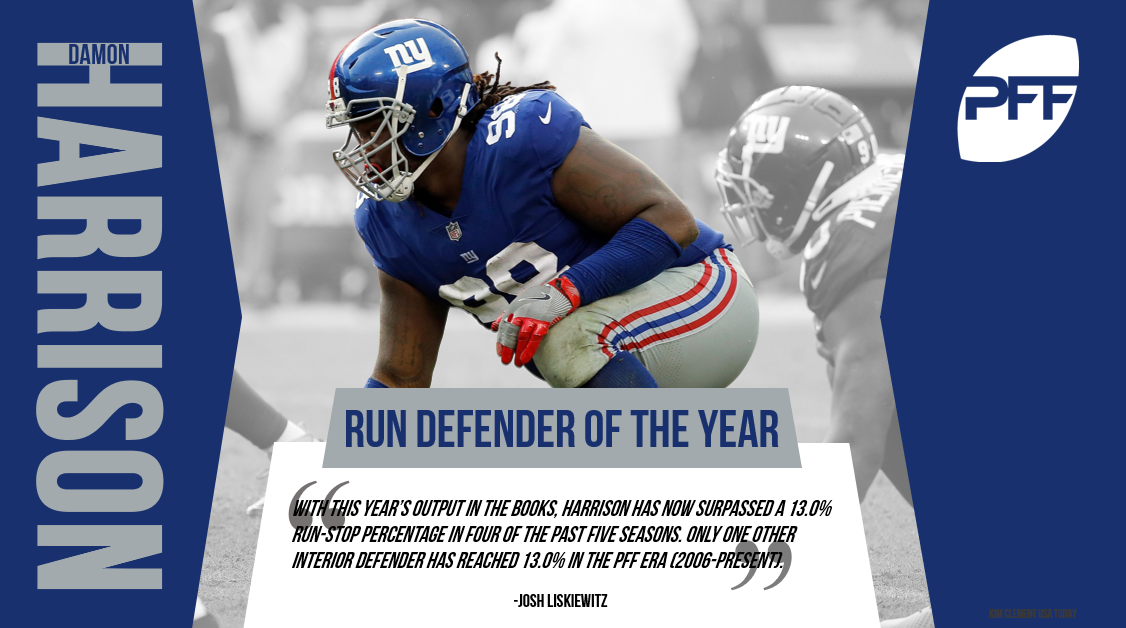 How significant is his hitting the 40-stop barrier? For “Snacks” himself, it isn’t. This is the third consecutive year he’s reached the plateau, as he tallied 49 in each of the prior two seasons. His three-year total of 138 run stops is completely unmatched by his peers, as the next-highest total in that span is just 94. In fact, only three other times in the PFF era (since 2006) has a defensive interior player reached 40, with Bennie Logan’s 42 in 2015 (for Philadelphia at the time) being the highest single-season total outside of Harrison’s 2015 and 2016 campaigns.

One other statistic about Logan’s 2015 performance is worth mentioning in order to provide further context to Harrison’s historical dominance: His 14.8 run-stop percentage that season marks the only time a defensive interior player in the PFF era not named Damon Harrison has been above 13.0 percent in the category. With this year in the books, Harrison has now exceeded this threshold in four of the past five seasons. During his three-year reign of terror on interior offensive linemen and running backs, Harrison’s average run-stop percentage sits at 15.7, while second-best has managed just 12.0 percent.

Further rounding out Harrison’s game has been his improved pass-rush production over the past two seasons. In 2016 he posted a career-high 23 total pressures, and while he failed to top that with 20 in 2017, he had 31 fewer rushes this season and finished with a career-high 76.6 pass-rush grade. Combine that with his league-leading 94.1 run-defense grade, and Harrison, who has generally been considered a two-down player throughout his NFL career, posted a 90.4 overall grade, good for sixth-best among all defensive interior players in the league.

The run-stopper has to a large extent been marginalized in today’s pass-happy NFL, but Harrison is a true outlier because his elite play is so consistently beyond that of his peers, making him arguably the best player on the New York Giants roster. Harrison was the best run defender in the NFL in 2017, a distinction he has now earned in three consecutive seasons.

[Editor’s Note: For all PFF Edge & Elite subscribers, we will be releasing our 2018 Free Agency Guide on Wednesday, January 24 with profiles, grades, signature stats and much more on all the top free agents likely to hit the open market this offseason.]