As ‘Teaching Month' wrapped up last week at PFF, today we’ll examine how NFL teams like to utilize their safeties in the slot. If the last few NFL seasons has taught us anything, it’s that hybrid defenders have started to find their place in our league with the rise in '11' personnel on offense. Teams have widely abandoned the traditional ‘strong safety, free safety’ mold and have instead began asking their safeties to do a variety of things.

With teams in the NFL utilizing nickel personnel the majority of the time, the rise of the hybrid safety has become widespread. Some teams choose to specialize a corner or two in the slot, while other teams cross train multiple players (and positions) to play inside. The teams who choose to employ extra cornerbacks on the field inherently open up a new problem – opposing offenses can now punish them via the running game or throw to tight ends. The counter for this, for many teams, has been to find versatile safeties that thrive in coverage and in open space.

[Editor's note: The slot position in PFF's nomenclature is, broadly speaking, any player beyond the end of the line of scrimmage but inside a perimeter cornerback that is lined up opposite a receiver.]

The focus today will cover how often teams utilize their safeties in the slot, and which of those safeties performed the best when lined up there.

Safety usage in the slot 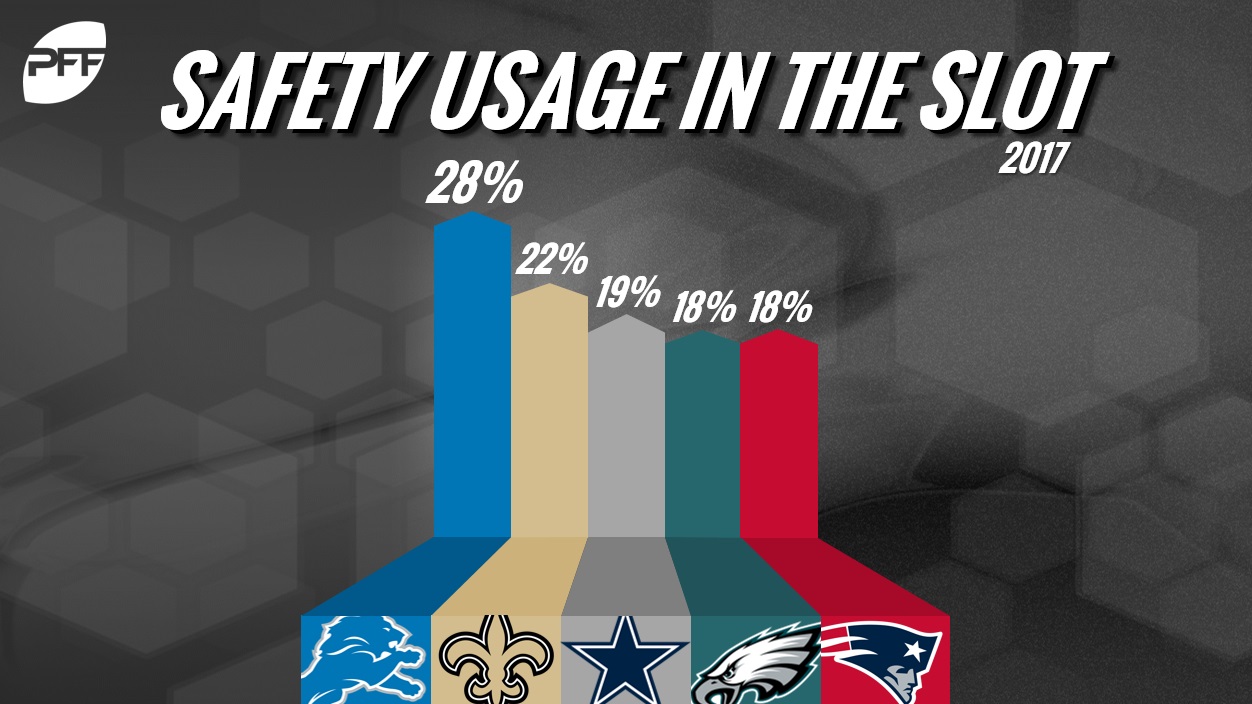 On a team level, the Lions – by a large margin – led the league in safety usage in the slot with a mark of 28.2 percent. Their safety production from the slot was led by Quandre Diggs, who spent over 460 snaps in the slot – 99 more than the next closest player – which was nearly 60 percent of his time on the field.

Top-five safeties in terms of snaps in the slot in 2017: 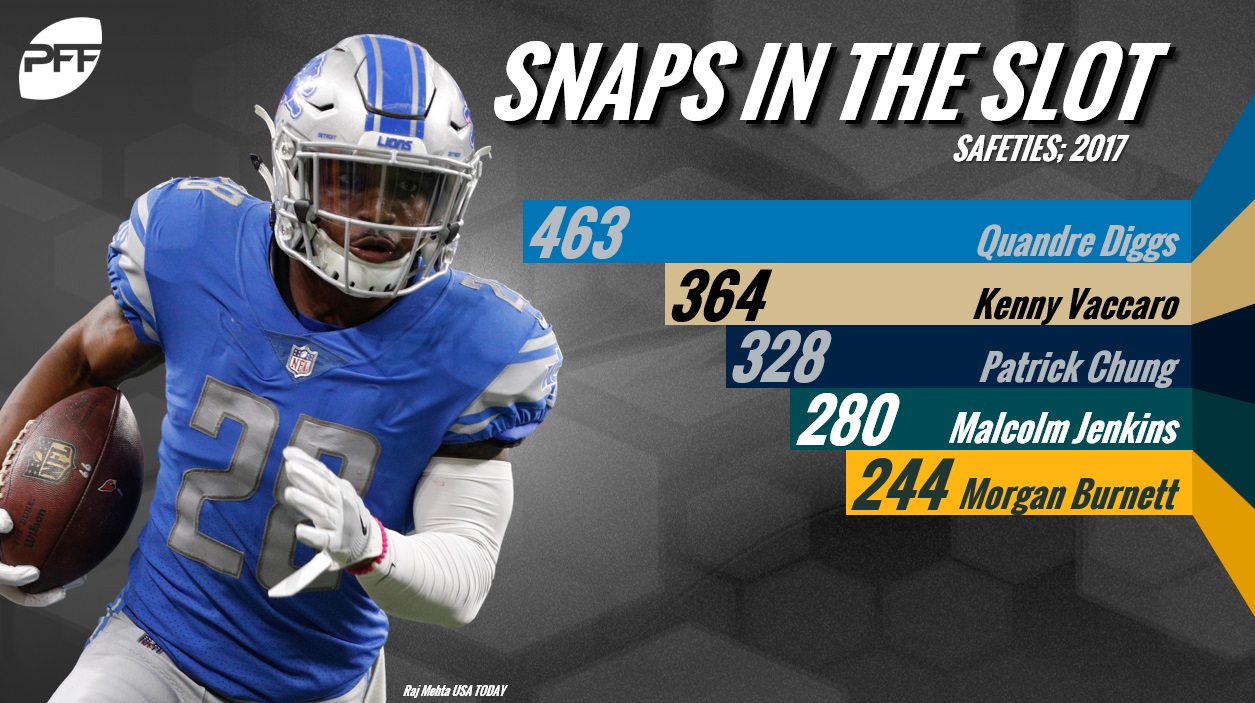 Of the safeties who worked in the slot the most, Diggs led the group from a coverage-standpoint. His 11.9 snaps in coverage per target, and his 0.51 yards allowed per coverage snap outdid the other safeties in the top five by a fair margin. While his coverage skills shined in the slot, Diggs finished with a mark of just 1.0 percent in run-stop percentage, or the bottom of this group.

Out of the Saints safety room, Kenny Vaccaro spent over half of his time on the field covering the slot at a mark of nearly 53 percent. Vacarro, however, struggled a bit throughout the season in coverage (6.0 cover snaps/target, 1.64 yards/cover snap), but for a safety that that primarily lined up in the slot, he did perform well against the run with a 4.8 percent run-stop-percentage – tops among the top-five safeties being discussed here.

While Malcolm Jenkins spent the majority of his time in the box, he played 30 percent of his snaps covering the slot. Of course, the Philadelphia Eagles had one of the best true slot corners in the league last season in Patrick Robinson, however, it goes without saying that Jenkins’ versatility and ability to play inside were instrumental in their historic Super Bowl run. Jenkins graded the highest of these five safeties with an overall grade of 84.2.

Outside of the top five in terms of snaps played in the slot among safeties, there were multiple players at the position around the league who often lined up in the slot. Other top performers in this category include Los Angeles Chargers S Jahleel Addae and Atlanta Falcons S Keanu Neal. Addae finished seventh and Neal finished ninth in the league as far as snaps in the slot, and they both were productive, versatile members of their respective secondaries – as evidenced by their overall grades: Neal, 85.2; Addae, 83.4.

Another interesting note on Jenkins, Neal and Addae: not only did these players land in the top 10 in slot usage, they did so while also playing the majority of their snaps in the box (42-43 percent). Safe to say that when talking about hybrid safeties in the NFL, these three guys should certainly be names to come up.

Whether or not these usage rates for safeties in the slot are a matter of talent or defensive philosophy, utilizing safeties across the defense is becoming somewhat unavoidable, as offenses continue to exploit the widths of the field. Hybrid safeties that can play multiple roles, and play them well, are not only advantageous from a positional-market standpoint, but also because they have the capability to make a defense competent against both the run and the pass.

The flexibility of safeties in today’s NFL has certainly assisted in illustrating a common theme: versatility is the name of the game.