Two years ago, we saw one truly loaded free agent classes among cornerbacks in recent memory. Trumaine Johnson kicked things off by receiving a franchise tag by the Rams. Sean Smith took home a 4-year, $38 million deal and Janoris Jenkins inked a 5-year, $62.5 million contract. After Josh Norman was cut, he netted himself a nice little 5-year, $75 million deal.

When the dust settled, there was little money left over for Packers starter Casey Hayward. Green Bay had drafted the same position in the first (Damarious Randall) and second round (Quinten Rollins) the year prior, and they weren’t even players to bring back their highest-graded corner from 2015.

[Editor's Note: For all PFF Edge & Elite subscribers, we will be releasing our 2018 Free Agency Guide on Wednesday, January 24 with profiles, grades, signature stats and much more on all the top free agents likely to hit the open market this offseason.]

Hayward had still never quite shaken the slot corner label he earned early on in his career. His rookie season of 2012 was the single highest-graded season for a slot corner we’ve ever seen. He allowed a passer rating against of 31.1 – still a PFF record – and had 18 total pass breakups and interceptions. Hamstring issues hampered him the next couple seasons, and the Packers were reluctant to let him get a legit shot as a perimeter corner. With other teams sharing the same concerns about Hayward’s speed holding up on the outside, he had to settle for a 3-year, $15.3 million deal with the Los Angeles Chargers.

Since then, he’s not only outplayed every corner signed that season, he’s arguably outperformed every single corner in the NFL, and in 2017, that was certainly the case. Over the course of two seasons, Hayward has gone from afterthought to elite, and he’s PFF’s 2017 coverage defender of the year recipient. 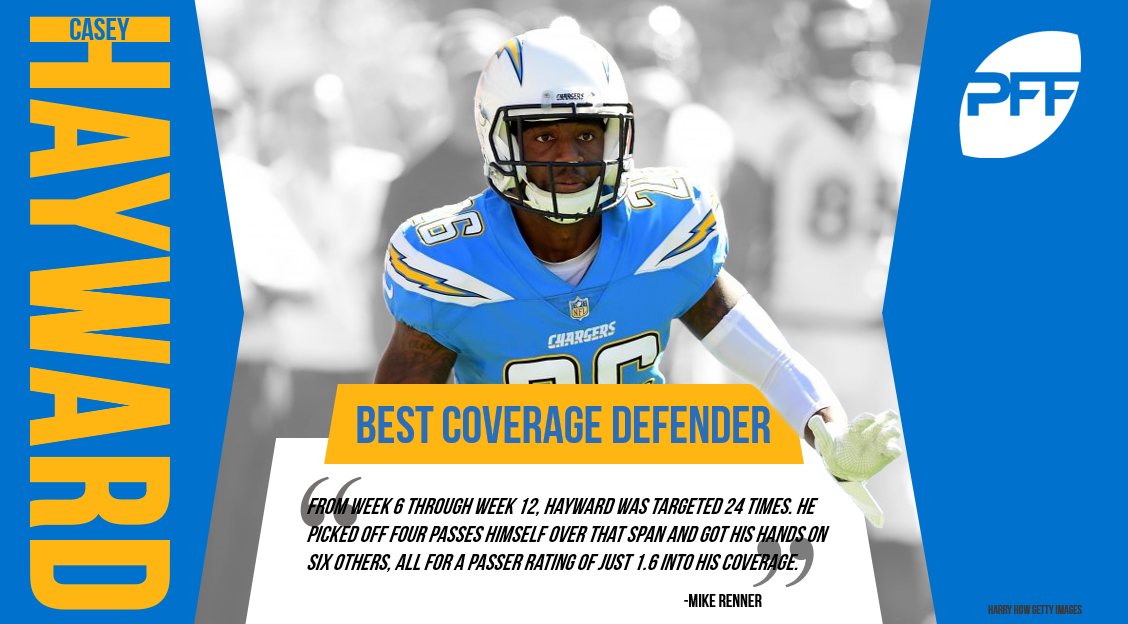 Hayward started this past season off with a handful of non-descript performances before going on one of the best statistical stretches of play we’ve ever seen. From Week 6 through Week 12, Hayward was targeted 24 times. He allowed only seven catches for 81 yards and zero touchdowns. He also picked off four passes himself over that span and got his hands on six others.

That’s a passer rating allowed of 1.6.

Even outside of that stretch, it’s not like quarterbacks were doing themselves any favors by targeting Hayward this season. He led all full-time starters in completion percentage allowed (42.7 percent) and was fourth in passer rating allowed (58.6).

And that slot corner label? Hayward spent a grand total of 20 snaps all season long over the slot – most coming when he was following opposing teams number one receivers. He tracked the likes of Demaryius Thomas (x2), Alshon Jeffery, Amari Cooper, Dez Bryant, Josh Gordon, Josh Doctson and Robby Anderson this season.

It was an incredible season from the Chargers corner, and one of the highest graded we’ve seen in our 12 years worth of data.