Broncos CB Chris Harris Jr. continues to dominate from the slot as one of the league's premier cornerbacks

Chris Harris Jr. has been one of the top cornerbacks in the league over his eight-year career, and 2018 turned out to be no different. Despite the feared No Fly Zone being disbanded, the Broncos' defense was still the backbone of the team and Harris continued to shine as a premier cover corner in the NFL. Harris’ versatility has allowed him to cover receivers all over the field during his career—however like most seasons; it was from the slot where Harris did most of the damage in 2018.

Harris once again impressed this season, and despite the injury that limited him to only 12 games, he finished the regular season with the fifth-highest coverage grade (86.0) and fourth-highest overall grade (85.1) among the league's cornerbacks. All told, Harris allowed just 9.1 yards per reception and a passer rating of only 63.6 on throws into his coverage, respectively ranking eighth and sixth among qualifying players at the position, all while allowing just one touchdown over 457 coverage snaps. While his overall grade was third-best on the team, Harris showed that he was also a complete player by also leading the Broncos in tackling grade at 82.1.

Upon reviewing the numbers, you can understand why the 29-year-old Harris has lined up over the slot for the majority of his career. In 2018, 58% of Harris’ snaps were spent covering the slot, and he was dominant for most of them, finishing with a league-high 12.7 coverage snaps per reception allowed, all while not allowing a single touchdown. Rounding out an excellent season, Harris finished in the top five among qualifying slot corners in snaps per slot target (8.1), yards allowed per slot coverage snap (0.75), and passer rating allowed (57.3). 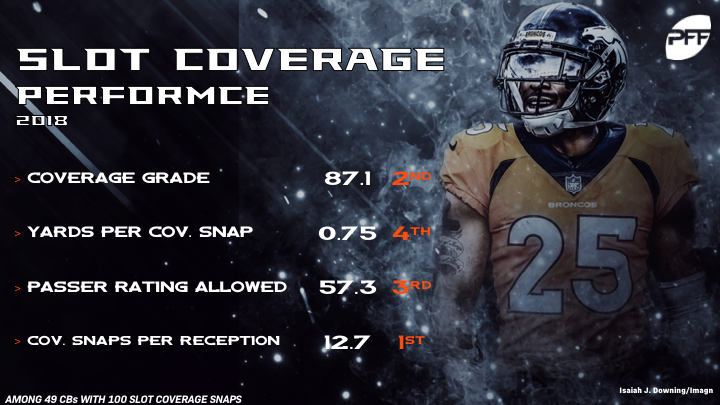 When looking back at individual game performances from 2018, Harris came up big against some of the league's toughest opponents. Two of his three highest-graded coverage games came in Week 8 vs. the Kansas City Chiefs and Week 12 vs. the Pittsburgh Steelers. During the Week 8 matchup with the Chiefs’ explosive receiving corps, Harris was a blanket; allowing just one reception of six yards, finishing with a coverage grade of 90.4 over 40 coverage snaps and in their two divisional matchups, Harris yielded only 53 yards on 89 coverage snaps against a Chiefs offense that finished third overall in team receiving grade. Harris showed up big again in Week 12 against a Steelers offense that featured both Antonio Brown and JuJu Smith-Schuster, finishing the game with a coverage grade of 84.2. In a season-high 63 coverage snaps, Brown and Smith-Schuster were only able to muster 27 combined yards on seven targets when facing Harris in coverage.

Harris’ outstanding 2018 campaign is something the Broncos have been lucky enough to grow accustomed too. When looking at our grading for cornerbacks in the 2010’s, it should be no surprise Harris’ name shows up all over when looking at statistical leaders year over year. Since his rookie year in 2011,  Harris has finished in the top five in coverage grade four times — including two seasons where he was the highest-graded cornerback in the NFL. Harris’ command over the slot position also spans the course of his career, seeing him in the top seven players in passer rating allowed in six of his eight NFL seasons. Although Harris is approaching the age of 30, there seems to be no slowing down for the Pro Bowl cornerback, and he will be a key chess piece for new defensive-minded head coach Vic Fangio to utilize in 2019.