Breaking down the NFC Playoff Picture

Only two teams are playing for playoff berths in the NFC this weekend, but others have playoff seeding on the line in Week 17. We’ve gone over the current race in the NFC and the remaining possibilities below. 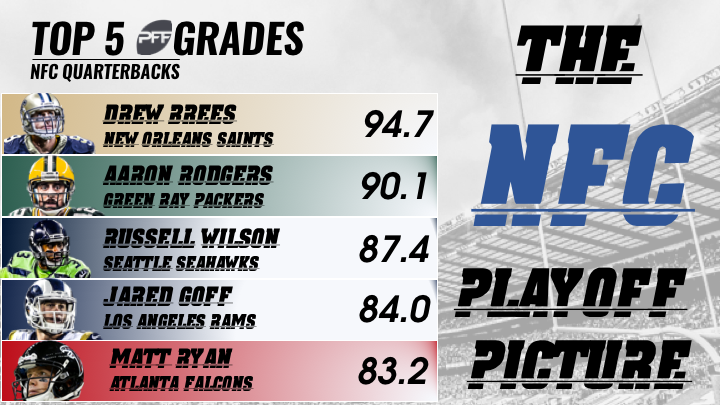 Drew Brees and the Saints clinched home-field advantage throughout the playoffs with a gritty win over a Pittsburgh Steelers team that desperately needed a win in Week 16. As such, coach Sean Payton likely won’t have his key players in for too many snaps if any at all in their regular season finale against Taylor Heinicke and the Carolina Panthers.

The Rams have punched their ticket to the postseason, but a loss to the San Francisco 49ers and a Chicago Bears win on Sunday would strip them of their first-round bye. Expect Jared Goff and Todd Gurley (if healthy) to at least play their way to a comfortable lead against the 49ers before the duo and other Los Angeles starters see the bench.

Nick Mullens has done much better than C.J. Beathard working under center in San Francisco, but his efforts haven’t been enough to completely dig the team from the grave that Jimmy Garoppolo’s knee injury and Beathard’s lackluster play dug them into earlier in the year. Mullens has earned a 68.2 overall grade across his 457 offensive snaps this season, while the team’s tight end George Kittle leads the offense in overall grade (88.4) as Mullens’ go-to target.

If Los Angeles can slow down the 49ers’ rushing attack and the Mullens-Kittle connection, Goff & Co. should have no problem securing the first-round bye.

Chicago will have their eyes set on ripping Los Angeles’ first-round bye from them in their Week 17 affair with the Minnesota Vikings, a team that needs a win just to secure their spot in the postseason.

Khalil Mack and the Bears’ defense has carried the team to its 11-4 record so far this season, and they’ll be tasked with carrying the load again against Kirk Cousins and the Vikings’ offense. In their last meeting, Cousins threw two interceptions, including a pick-six to safety Eddie Jackson, and fell victim to a strip-sack from Mack en route to a 25-20 loss in the Windy City. Jackson (93.2 overall grade) and Mack (90.2) will look to have a repeat performance come Sunday.

Locked into the No. 4 seed after their win over the Tampa Bay Buccaneers, Dallas doesn’t have much to play for against the New York Giants in Week 17. But, owner Jerry Jones didn’t exactly say his team would be resting their starters and taking things easy this week.

“Absolutely. We’re all out,” Jones said when asked if the Cowboys were playing to win against New York, per Jon Machota of the Dallas Morning News. “We’ve got work to do. We’ve got some work to do out here; I think we’ll all agree. We don’t want to, if we can, go into the playoff with dangling participles – loose ends.”

Whether Zeke eats or not, Dallas’ efforts won’t count for much until the postseason, and who they’ll play in the Wild Card round is still yet to be determined.

Seattle’s win over the Kansas City Chiefs on Sunday Night Football guaranteed the team a playoff berth, but a loss in Week 17 and a Vikings' win would drop them from the No. 5 spot to the No. 6 spot. Staying at No. 5 and playing the Cowboys in Jerry World is likely higher on coach Pete Carroll’s list than taking his team to the Chicago or Los Angeles, so expect Seattle to trot out their starters to secure a win against the visiting Arizona Cardinals on Sunday.

Arizona’s chances of pulling out a win are slim given their play all season long. The Cards are the current favorites to land the No. 1 overall pick, and for good reason. Rookie quarterback Josh Rosen (52.4 overall grade) has struggled behind the NFL’s worst offensive line, and neither he or the big men up front are expected to turn things around in a week’s time.

Win, and they’re in. Regardless of how the rest of the NFC performs on Sunday, Minnesota can secure their spot in the playoffs with a win over the Bears. If the Vikings do lose, an Eagles win on the road against the Washington Redskins would send them to the couch for the playoffs. Losses from both Minnesota and Philly, however, would tip the scales back in favor of the Vikings for the last playoff spot.

Nick Foles is back, and he means business. Pulling off wins against the Rams and the Houston Texans, Foles has the Eagles alive and (sort of) well in the NFC playoff race. A win against Washington and a Vikings loss puts Foles & Co. back in the postseason with another storybook ending in arm’s reach.

Foles is coming off back-to-back games with 75.0-plus single-game grades, which, if maintained, is more than enough for Philly to do some damage in the postseason if their defense continues to play above expectation with a star-studded front four and their over-achieving backups in the secondary.