Bills should build around Tyrod Taylor—not show him the door

With uncertainty surrounding the team as they show Rex and Rob Ryan the door, it made some business sense for the Buffalo Bills to bench Tyrod Taylor in Week 17. By doing so, the franchise avoided being on the hook for a huge sum of guaranteed money if Taylor got hurt in a meaningless game. Now that the season is over, however, the Bills would be foolish to walk away from the quarterback.

Tyrod Taylor represents an increasingly frustrating tranche of NFL quarterbacks that have shown more than enough ability to win games, yet will likely never become elite. In the current football landscape, such players can command ludicrous salaries based entirely off their ability to not be Blaine Gabbert.

Taylor isn’t alone here; there is an increasing number of flawed, but capable, starters around the league giving teams major headaches when it comes contract time. Washington is in a similar bind with Kirk Cousins, and others will follow.

Everybody is searching for the next Aaron Rodgers, because he is the home-run hit that makes everything else easier. Rodgers found his old form this season and transformed a Green Bay offense that was stuck in the mud. He has been able to overcome an underperforming defense that can’t cover anybody, and drag his team to the playoffs—and who knows how much further. If Green Bay replaced him with even Derek Carr or Drew Brees, that probably doesn’t happen.

This is the dilemma for teams. You want the next Aaron Rodgers, but at some point, you need to accept that you’re not going to find him, and determine the point at which you can settle for a lesser player to be your QB and start to build around him instead.

There is no hard and fast line here, and no obvious single number to point to that a player can achieve to qualify. It’s all subjective and instinctive.

I would argue though that Tyrod Taylor has clearly surpassed whatever reasonable threshold you want to specify. I don’t think Taylor is flawless by any means, and he’s a QB that may have a very definitive cap on his projected ceiling, but he has demonstrated himself to be a capable starter, at which point you are far better off dedicating resources to build around him as opposed to endlessly searching for a replacement—the odds of successfully upgrading at all are minimal.

Now, Taylor doesn’t have the best offensive line in the game like Prescott, or a running back that has carried the ball 322 times at 5.0 yards per carry behind it, and they are very different QBs—but the difference in perception is notable.

Prescott is celebrated as the next great franchise QB in Dallas, and is keeping Tony Romo on the bench—a player it looked like Jerry Jones would ride until he functioned no more. Meanwhile, Taylor has a large and vocal section of his own supporters campaigning for his replacement. Obviously, Prescott is a rookie, so the situations are far from direct comparisons, but it’s worth appreciating where Taylor is in terms of PFF grading, which comes from watching and grading every snap each player takes, not just computing some complex formula of stats. Tape shows that Taylor is a lot better than many are giving him credit for.

But if you need more evidence than PFF’s say-so for Taylor’s play, it’s there. One of the most important facets of a QB’s play in today’s NFL is how he deals with pressure. League-wide, pressure causes a drop of 33.0 points in passer rating, and QBs are pressured on almost exactly one-third of all dropbacks (33.6 percent). In passer rating terms this season, that’s the equivalent of turning Tom Brady into Colin Kaepernick simply by applying pressure, or Matthew Stafford into Jared Goff, and it happens, on average, on a third of a QB’s dropbacks, typically.

Tyrod Taylor versus pressure in the 2016 NFL season

Not only does Taylor's passer rating decline less than that of most players (14.3 points this season), but he has maintained a consistently-high passer rating when pressured over the past two seasons. This year, he recorded a passer rating of 80.1 when hurried; last season, it was 87.6. Those figures rank seventh and fifth in the league, respectively, and represent a QB that can still function at a high level when hurried and moved off his spot. If anything, they do him a disservice, because they don’t factor in the plays he makes when scrambling, which is a bigger weapon for Taylor than other QBs. He has over 550 rushing yards in each of the past two years, and each season, more than 400 of those have been on scrambles, adding four touchdowns to his tally over that span on passing plays where he took off to make a play on the ground.

Those numbers also combat the argument that Taylor has one of the league’s best run games to prop him up. He is adding 550-plus yards to that run game himself each season to make it look far better than it would with a less-mobile QB behind it. Buffalo has a league-leading 2,630 rushing yards this season, but Taylor accounts for 22.0 percent of them, and 23.3 percent of the team’s total in 2015.

That rushing threat is not necessarily a net win for him as a player, because what he gains on the ground, others may gain through the air, and he sacrifices those opportunities when he does run. However, it’s important to break down where the success comes from.

Taylor also makes big plays that many QBs can’t match. As attractive as a game manager is for teams to build around because he will give you a consistent and defined level of play, Taylor's brand of play gives a team the ability to come back from deficits in a way a game manager couldn’t. 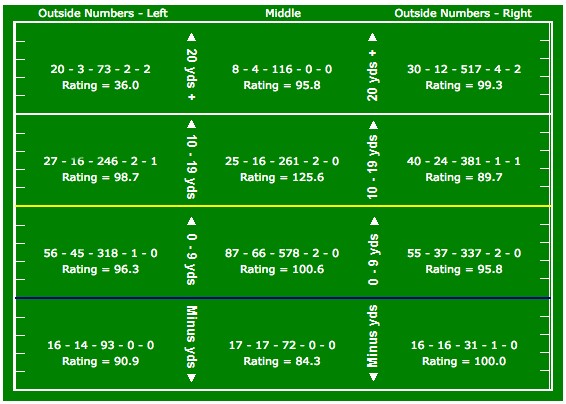 Against Miami in Week 16, Buffalo found themselves in a 14-0 hole early and were 14 points down a further two more times in the game, but Taylor was able to lead them back to take the lead with under 90 seconds left on the clock—only for the defense to capitulate in the remaining time and overtime. For the big plays he makes, Taylor rarely puts the ball in harm’s way. His nine turnover-worthy plays this season represent the second-lowest percentage after Tom Brady, and when you look at the ratio of big plays to those turnover-worthy ones, he is fifth league-wide.

Taylor’s issue has always been consistency on the intermediate, more routine plays that make the difference between good quarterbacks and very good (or even great) ones, but to cut him loose because he may never fully master that aspect of the game and become great would be an exercise in degenerate gambling. The chances of the Bills rolling the dice and coming up with a better QB than Tyrod Taylor in the short-term are incredibly small, so Buffalo would be crazy to show him the door, and far better off trying to build around him.