The Buffalo Bills are experiencing the brutal reality that is the NFL offseason with starting tight end Tyler Kroft already going down with injury. Progressing through the OTA's and training camp while minimizing injuries is one of many challenging tasks that franchise faces every year, but with injury stems opportunity and 2019 third-round pick Dawson Knox is next man up. 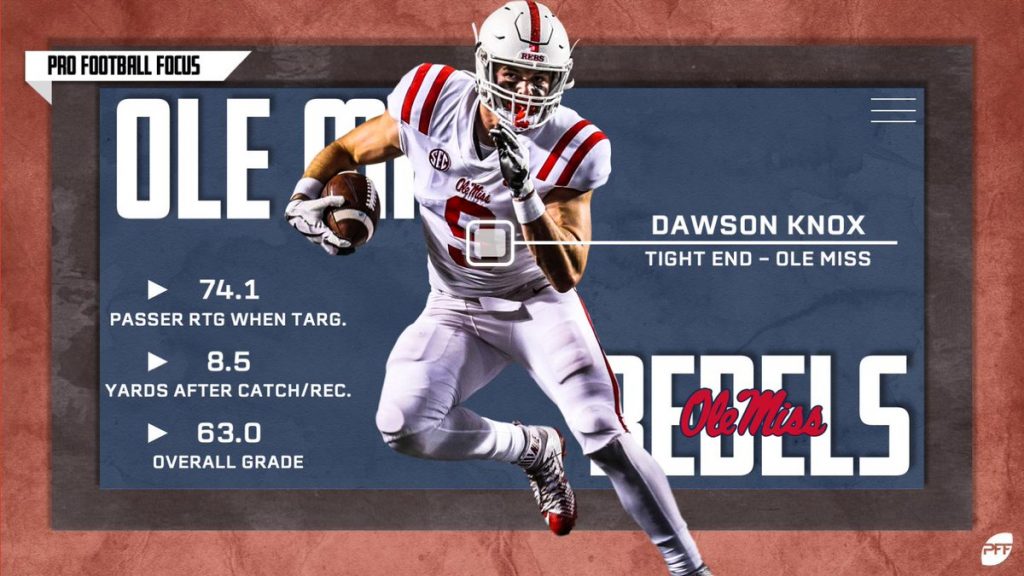 The Ole Miss alumnus amassed just 605 yards on 39 receptions throughout his collegiate career but was still heavily touted as a mid-tier talent entering the draft. Even with minuscule overall production, Knox led SEC tight ends by averaging 19.6 yards per catch on third and fourth down this season and was ranked sixth at his position on PFF’s Big Board.

It was easy to get bogged down in the Rebels’ offense with the talented cluster of pass-catchers in DaMarkus Lodge and early round picks A.J. Brown and D.K. Metcalf. This talent can partially explain Knox’s meager 28 targets in 2018. His small sample size fails to tell the complete story since his yards after the catch per reception mark of 8.5 yards ranked second among SEC tight ends with more than 20 targets.

PFF data suggests that the former walk-on will thrive with an increased workload for the first time in years as a result of his SEC-best 18.9 yards per reception.

Knox, a former quarterback, graduated from Ole Miss early but managed to display his straight-line speed while he was there. His 6-foot-4, 254-pound frame drew comparisons to Kyle Rudolph throughout the draft process, but Knox’s 4.57-second 40-yard dash time proves that he may be more explosive than his NFL counterpart.

As Knox transitions to the NFL, Bills sophomore quarterback Josh Allen will appreciate the addition of a deep-pass weapon, as he led the league with an average depth of target (ADoT) of 11.5 yards a season ago.

Last season, Buffalo ran 11 personnel (one running back, one tight end) on 68% of plays, five percentage points above the NFL average and targeted tight ends on 82 passes. Zero of these targeted tight ends are now on the roster, leaving ample opportunity for Knox to fill the void.

Versatility will aid Knox in seeing the field at an increased rate. He earned a 76.9 run-blocking grade, which ranked third among draft-eligible tight ends.

Buffalo traded up to secure Knox sending over multiple picks to the Washington Redskins in exchange for the opportunity to select the tight end. Even though he will be getting a chance earlier than Buffalo initially believed, he could be the young breakout skill position player Buffalo needs.