Baker Mayfield is the only quarterback among the top-13 at his position in terms of overall grade per dropback whose team has negative expected points added on those dropbacks through Week 6 of the NFL season. How is this possible? We took to PFF’s play-by-play grading on every play of every game to figure it out.

Imagine ripping these tight window throws only for drops that happen 6+ times a game. pic.twitter.com/7tuS5pQTsR

After a solid Peppers PR, Browns begin Q2 with great field position. Take a shot with some trickery (Flea Flicker) and have a nice set-up here with protection and routes. Nice ball from Mayfield and Ratley simply has to catch this. No excuses. #BrownsFilmBDN pic.twitter.com/1g4fYIH9d4

Shown above are three big-time throws from Mayfield where his receivers fail to complete their end of the bargain. Dropping passes has become a weekly routine for the Browns, as Mayfield leads the NFL in drop rate at 9.8 with no quarterback coming within 2% of him (Blake Bortles ranks second at 7.2%).

Mayfield has lost at least 182 yards (NFL-high) due to drops. Also, he also has an average depth of target of 11.9 on said drops, and a whopping 75% of them were targeted beyond the sticks. These drops don’t include plays such as the interception against Baltimore where Rashard Higgins ran the wrong route or the deep hitch to Antonio Callaway on 3rd & 9 in the fourth quarter in the same game when Callaway failed to secure a perfect ball before getting it knocked out by the Ravens defender. 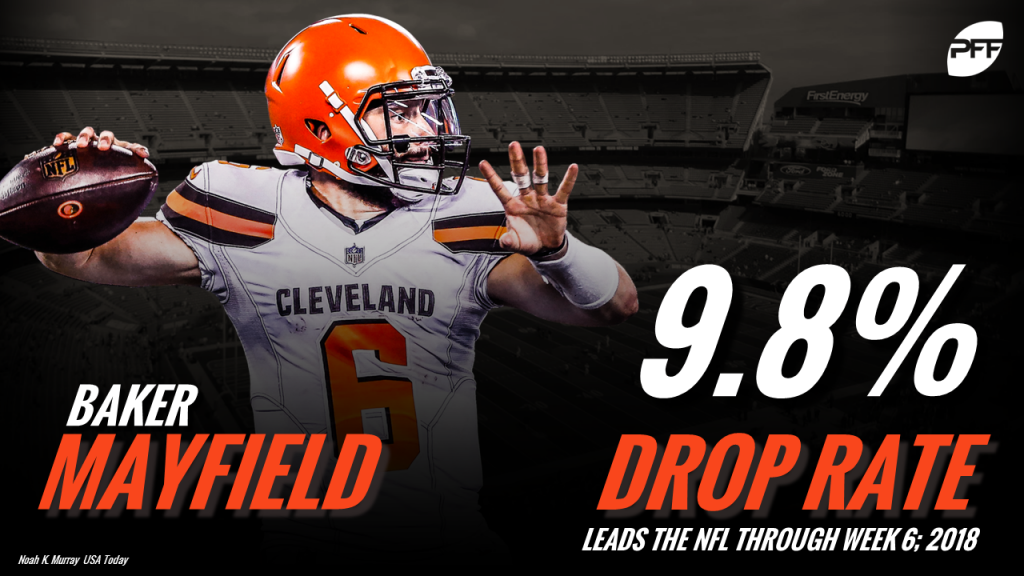 During the offseason, data scientists Eric Eager and George Chahrouri developed an improved passer rating metric and aptly named it “adjusted passer rating.” The quick synopsis is that touchdowns and interceptions are not stable metrics and often times rely on factors outside the control of the quarterback (just look at dropped flea flicker from Mayfield). They replaced touchdowns with big-time throws (BTTs) and interceptions with turnover-worthy throws (TWTs), and the end result was a passer rating metric that was much more predictable of a quarterback’s future play. It’s not perfect, as it isn’t able to account for the drops that would be yards nor for the times a receiver ran the wrong route, but it’s a major improvement over the old standard.

So how does Mayfield stack up here? Much better than his 72.8 traditional passer rating, as his adjusted passer rating of 95.1 ranks 13th in the NFL, which is a tick below Carson Wentz (96.8) and a few points below Tom Brady (98.2). The increase of 22.3 points over his traditional line is the largest in the NFL by a significant margin. What this tells us is that Mayfield’s stat line is due for a big improvement – as long as his pass-catchers do their jobs.

This year marks the first time we’ve collected specific ball location accuracy data in-season. In year’s past, we’ve done this in the offseason and used the data for internal purposes. Accuracy gets worse as a player targets further downfield, much like how completion percentage wanes on deeper targets. This season has six quarterbacks averaging over 10 yards per target (min 75 attempts), but just four are still starters for their respective teams (Ryan Fitzpatrick and Tyrod Taylor both averaged over 11 yards per target). Of those six, Fitzpatrick did his ‘Fitzmagic’ things, pulled a “rabbit out of head” and led the pack with 63.2% — third-highest among all quarterbacks, a ridiculous number to be accurate on with his average depth of target — of his passes being on frame or accurate, but Mayfield comes in second with 56.7% of his passes deemed accurate on an average depth of target of 10.35.

It’s not all sunshine and roses for Mayfield, as his most recent game is evidence of that. He made two bad throws, both resulting in interceptions that went down as his first interceptions of the season that was solely his responsibility. Mayfield never seemed to be able to get into a rhythm and his receivers were often a step slow as he looked hesitant to let the ball rip like he has so far this season. It may have been a completely different game had his receivers not let him down with drops on big-time throws, but that’s something every quarterback deals with once in a while.

This week presents a prime opportunity for Mayfield to get back on track and let the stats show an accurate description of how he has played three and a half games into his career. The Tampa Bay Buccaneers field one of the worst defenses in the NFL, in both traditional stats and PFF grades.

Anyone watching Mayfield play can attest to the major uptick in performance by the Browns offense as a whole once he was entrenched as the starter. He’s giving the Browns every opportunity to score points; now his teammates need to help him out.