An MVP candidate when healthy, Rodgers has proven to be one of the very best signal-callers the NFL has to offer, producing a PFF grade of 88.3 or higher every season between 2008 and 2016. His 2011 season, where he finished with an 98.9 overall grade, remains the highest grade we’ve seen a quarterback earn since we began grading with the 2006 season.

Rodgers looks ready to lead the Packers back to the playoffs in 2018, and it wouldn’t be a surprise to see his name in the MVP running early, and late in the year.

Through the first five games of the 2017 season, Rodgers threw for 340 yards on nine completions that traveled at least 20 yards downfield, ranking fourth in the NFL. The injury meant that’s as far as his season would go, with the exception of an ill-fated return in Week 15 with the Packers still in the playoff hunt, but Rodgers prowess throwing downfield is something which has been a theme throughout his career.

Despite missing time through injury, Rodgers has thrown for at least 676 yards on deep passes in every season except 2017, and was at his best during that historic 2011 season. Then, Rodgers ranked second in the NFL with 1,248 deep passing yards, despite 48 fewer deep attempts than the league-leader in Eli Manning. Rodgers also produced the best touchdown-to-interceptions ratio on deep throws that year at 13:1 in the regular season. 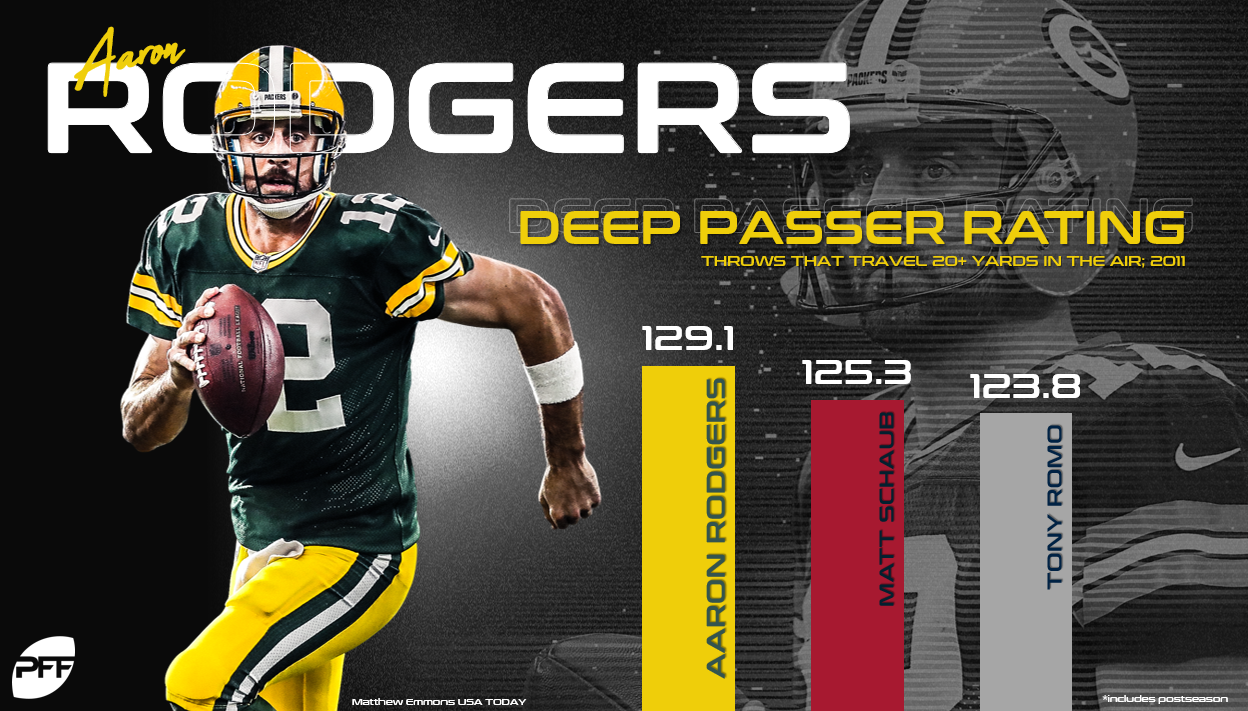 Making the throws few others can make

What makes Rodgers so special is that, simply put, he does things that few other quarterbacks in the NFL can do. He’s become known as the most prolific ‘Hail Mary passer' in the NFL, and while those plays do involve some luck, it’s hard to deny that Rodgers does the two things most important on those last second plays, buying time for your receivers to get downfield, and getting the ball into the end zone, better than anyone else. Who can forget him completing two of them in the final minute against the Arizona Cardinals in the 2015 playoffs.

Still blows my mind that Aaron Rodgers completed these two passes. One on 4th-and-20, the other falling to his left as time expired, to tie a playoff game. pic.twitter.com/ua2rnHdhEx

Rodgers ability to keep plays alive under pressure is impressive, and in his last full season in 2016, he led the NFL with 12 touchdowns and an NFL passer rating of 93.8 on throws under pressure. Performance under pressure is hardly stable, but Rodgers still managed to lead the NFL with 33 touchdown passes on plays where pressure got to him between 2014 and 2016. Rodgers' return should mean that the Packers can still find big plays, even when protection breaks down and he has to leave the pocket. Rodgers can’t do it on his own though, and it’s why the Packers offseason has been so important. 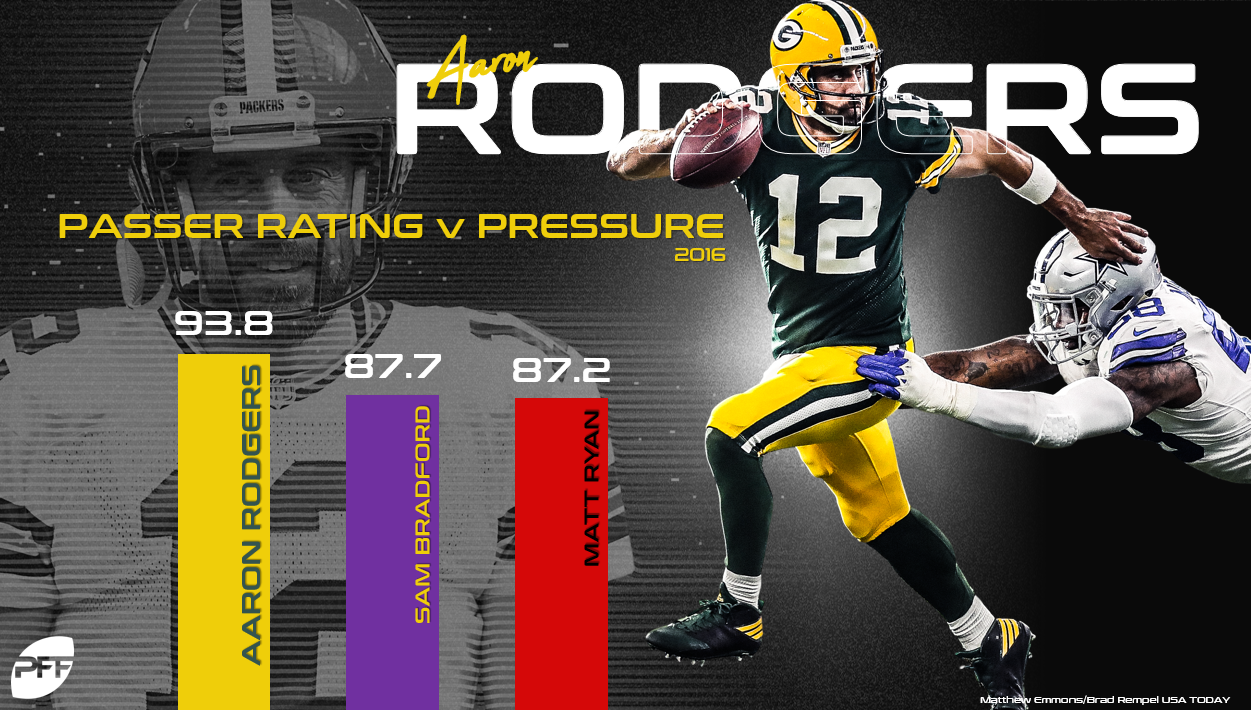 Help on both sides of the ball

This offseason, the key addition on offense has been tight end Jimmy Graham, who the Packers will be hoping for an improvement on his final season in Seattle, where his 54.2 PFF grade ranked 33rd at the position. Graham did produce a grade of 83.0 or higher in four out of the past six seasons however, so a return to form shouldn't be a huge surprise. What Graham offers is a mismatch weapon in the red zone for Rodgers and someone who can line up and do damage from the slot. In 2016, Graham’s 2.36 yards per route run from the slot was the best mark among NFL tight ends, with the former basketball player snagging three scores to boot.

The biggest impact though is on the defensive side of the ball, where three key additions could make Rodgers’ life easier by limiting the amount of points he needs to put up. Muhammad Wilkerson joins their defensive line on a one-year “prove-it” deal, with the hope being that he gets back to his 2012 to 2015 form where he produced PFF grades of 86.7 or higher in three of the four seasons, and never lower that 82.2. Things haven’t been as good from him lately, but at his best he is a double-digit sack player who can wreak havoc against the run and pass.

The Packers used their top two draft picks on cornerbacks, with Jaire Alexander allowing an NFL passer rating of just 19.9 at Louisville, the lowest mark in the draft class. In the second round, they added Iowa’s Josh Jackson, who broke up or intercepted 28.1 percent of the passes into his coverage, leading the draft class. If the play of Marshon Lattimore and Tre’Davious White taught us anything last year, it’s that good cornerbacks can make an impact early. It’s not always the case, but the Packers made a clear effort to improve their defensive backfield in this draft.

Eyes towards the 2018 season

Between the return of Rodgers coupled with his ability to keep the Packers in games late with ridiculous throws and keeping plays alive and an investment in help on both sides of the ball, the Packers have done more than enough to attempt to wrestle the NFC North away from the Minnesota Vikings in 2018.