As several teams have shown already, a seemingly successful campaign can be instantly derailed by an injury to a starting player. Take the Washington Redskins, for example. A few weeks ago the ‘Skins were 5-2 and looked like the favorites to win the NFC East. Then they lost their starting quarterback, both starting guards, a starting wide receiver, a backup quarterback and a starting cornerback, just for good measure. The Redskins now sit at 6-6 and are on the outside looking in at the resurging Eagles and Cowboys.

At this stage of the season, the final few games can be a difference between a playoff berth and just missing out on the postseason. They can be the difference between securing home-field advantage or a first-round bye. One slip up could see Super Bowl chances diminish, and that one slip up could be the result of a freak injury to a vital player in the starting lineup. As teams turn the corner and head down the homestretch, they'll no doubt be looking for fresh talent that could both add depth to injury-ravaged position groups and provide that extra spark that could tip them over the edge of the regular season and into playoff football. Below is a list of five free agents that can help a playoff contender right now.

After he ended the 2017 campaign with the highest overall grade of his career, the 32-year-old pass-rusher signed with the Detroit Lions in the offseason but was mysteriously cut just 24 hours later and has remained unemployed ever since. As he proved over his last two seasons, Ayers could still produce results, as he ended his two-year stretch in Tampa Bay with 98 total pressures and generated pressure on 14.1% of his snaps – the 26th and 19th best mark among qualifying edge defenders in that span, respectively. Ayers posted pass-rush grades of at least 83.0 in three of his last four seasons in the league and joined Von Miller, Ryan Kerrigan, Everson Griffin, Michael Bennett, Jerry Hughes and Carlos Dunlap as the only edge defenders to tally at least 40 quarterback pressures in every season from 2013 to 2017. 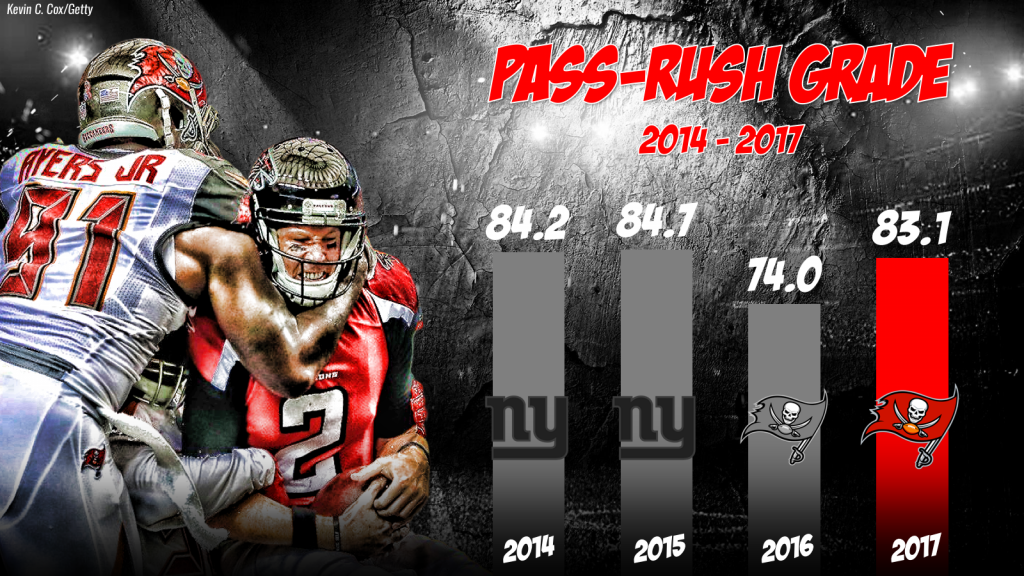 Another edge defender who remains unsigned is the six-year veteran Junior Galette, who would undoubtedly be on a roster right now if it weren’t for injury concerns. However, with just four weeks and the postseason left, teams in need of pass-rush help would be wise to dial Galette’s number. You had to look closely, as Galette only played 258 pass-rush snaps last season with Washington, but he was back to his very best; racking up pressure on 15.3% of his pass-rush snaps, which was the 12th best mark among the 87 edge defenders with at least 200 pass-rushing snaps. His latest showing put his career pressure rate up to 13.5% which is good 16th among the 104 edge defenders with at least 1500 pass-rushing snaps in the PFF era (2006-2018).

I get the off-field stuff, but honestly can't believe Junior Galette is still unsigned. Can transform a pass-rush still.

The amount of guys that have clowned Terron Armstead like this you can count on one hand. pic.twitter.com/DH9FJejFJo

In an NFL that now demands proficiency in the passing game, it can never hurt to have an added pair of experienced hands at the wide receiver position, especially if a team is already lacking in that department. Maclin, who graded above 70.0 in five of the eight seasons from 2009 to 2017, ended his last season with an overall grade of 69.1 which was good for 49th among 107 qualifying players at the position, and while it's not a jaw-dropping figure, it still bettered the marks of notable players such as T.Y. Hilton, Emmanuel Sanders and Randall Cobb. During his last season, Maclin dropped just two of his 42 catchable targets and generated a passer rating of 97.7 from his slot targets, which ranked 21st among receivers.

Before injury shut him down for the season, veteran safety Tyvon Branch had himself a quietly strong season with the Cardinals, recording 22 defensive stops on just 578 total snaps and finishing fourth on the team in total tackles, despite missing seven and a half games. Branch ended the 2017 campaign with a career-high grade of 79.2 and was a real asset against the run, where he tallied 14 run stops on 212 run defense snaps, resulting in a run stop percentage of 6.6% which was tied for the third-best mark among players at the position.

After 13 years as a stalwart in the middle of the Kansas City Chiefs’ defense, linebacker Derrick Johnson lasted just six games and 152 defensive snaps in Oakland before he was cut, and he has remained unsigned ever since. Throughout the years, Johnson has been a consistent force in pass defense, posting a top-five coverage grade of 82.8 in 2016 and top-10 coverage grade of 78.1 in 2017. He allowed just two touchdowns in coverage on his 1583 coverage snaps over the last four seasons combined, while his 16 pass breakups are the second-most among all linebackers in that span. In his most recent stint with the Raiders, the 35-year-old showed that he was a still a valuable asset in coverage, as he registered an above-average coverage grade of 68.6, 21st among 90 qualifying players at the position from Week 1 to Week 6. He was targeted three times in coverage during that span, and while he allowed three catches, he still managed to produce four defensive stops against the opposing passing attack, showing his worth to a team that is in need of coverage help. 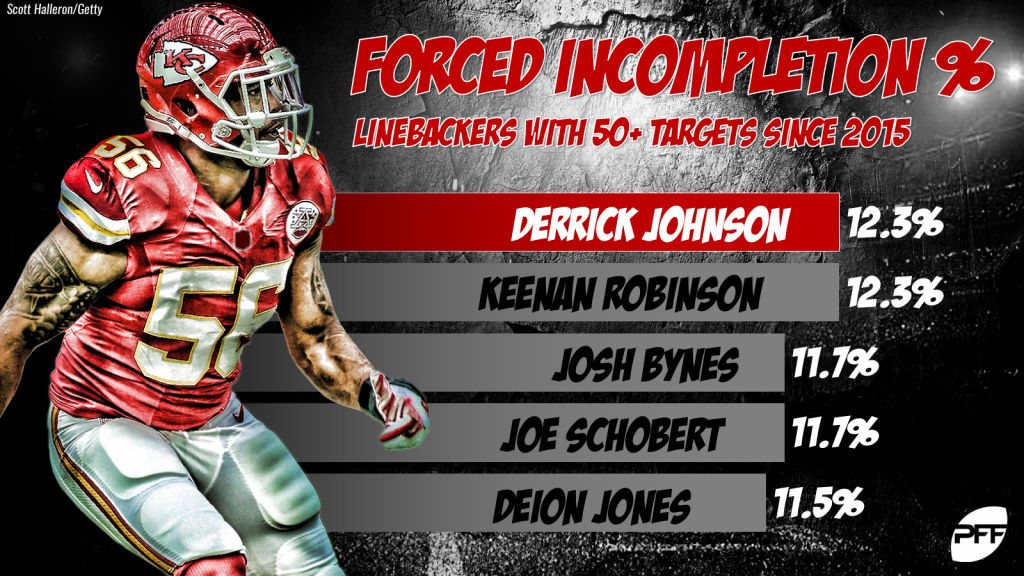