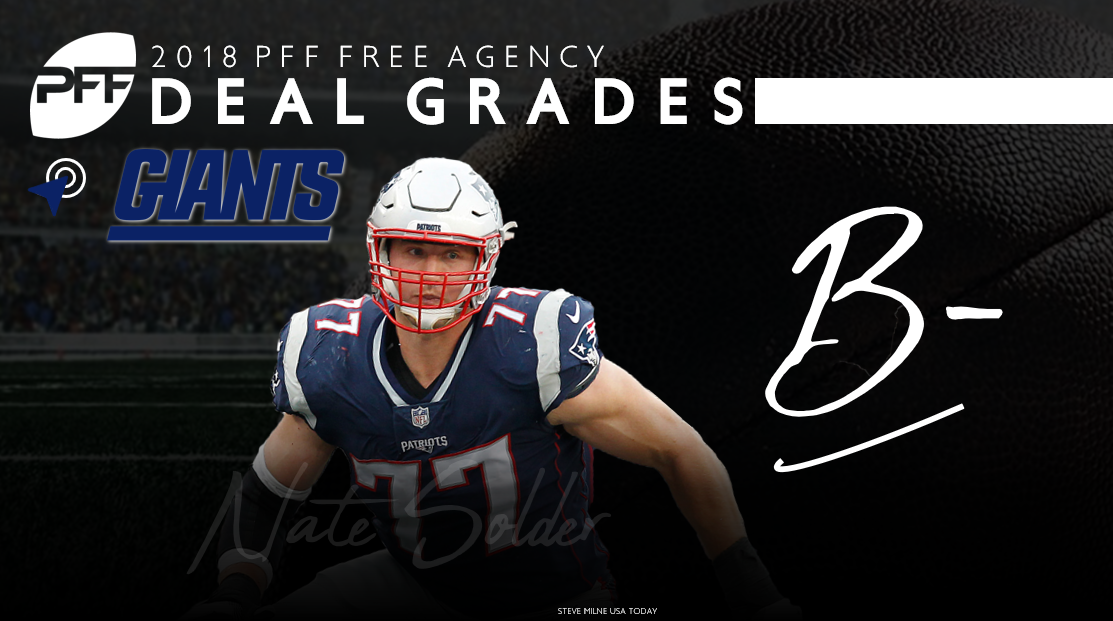 What it means for Solder:

Former New York Giants first-round pick Ereck Flowers has allowed 40-plus pressures and earned sub-52.0 overall grades in each of his first three seasons at left tackle in the NFL, paving the way for Nate Solder to step into his shoes in 2018. New York’s Bobby Hart (10 starts) and Chad Wheeler (6 starts) each struggled at right tackle this past season, so the Solder addition should move Flowers to right tackle.

Now the highest-paid offensive tackle in the league, Solder will have high expectations to live up to as the Giants’ blindside protector, but the 29-year-old veteran has proven consistent enough, specifically as a run blocker, to warrant the big pay day.

What it means for Giants:

Shifting Flowers to right tackle should alleviate some of the obvious pressure on the former ninth-overall pick, while Solder will serve as an immediate upgrade in pass protection for Eli Manning and quite possibly the Giants’ heir to Manning in the coming years.

After pushing through a slow start to the 2017 season, Solder allowed just 25 total pressures across his 358 pass-block snaps in his final 10 games (including playoffs), ranked tied for eighth in PFF’s pass-blocking efficiency (94.7) among offensive tackles with 250 pass-blocking snaps in said span.

Inking a $62 million contract at 29 years old, Solder comes out of his deal with the Giants on top. However, he still fills a glaring position of need for New York as the team closes in on a draft with little to no high-end talent at offensive tackle.