All season long we’ve been updating you on where the 2018 rookies stand in the race for PFF’s Rookie of the Year award, and seeing as it’s Wednesday, that means it’s time to update the top-10 (and honorable mentions) following Week 7. Just like last week, we are split within the top-10 with five players coming from the offensive side of the football and five coming from the defensive side, with one newcomer in the group. Without further ado, here’s where they currently stand: 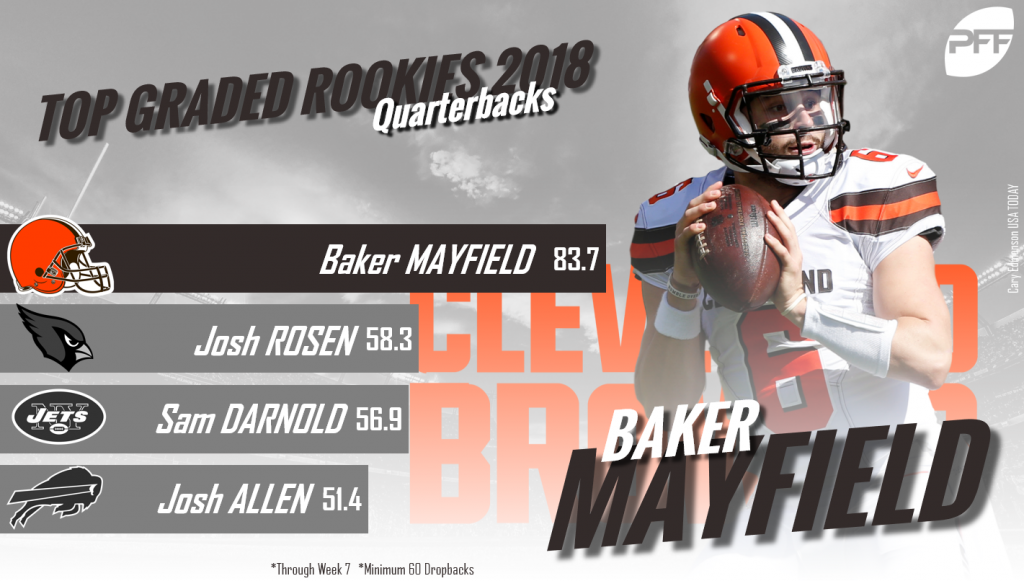 The number one overall pick rebounded in Week 7, posting a good 72.1 overall game grade against the Tampa Bay Buccaneers after posting his lowest game grade to date (61.6) in Week 6. Baker has now earned a grade of at least 70.0 in four of the five games he’s played in this season, surpassing the 80.0 mark in three of those games. For the season, Baker ranks ninth among quarterbacks in terms of overall grade and his 80.0 passing grade ranks 11th. Baker ranks fourth among all quarterbacks with a 7.7 big time throw percentage, and he’s been one of the best deep ball passers in the league, earning a 95.5 passing grade so far on throws that have traveled at least 20 yards in the air, trailing only Patrick Mahomes, Aaron Rodgers and Jared Goff

James ranks eighth among the 93 safeties league-wide who’ve played at least 100 defensive snaps this season in terms of overall grade, and he’s one of just three safeties to rank within the top-20 in run defense, pass rush and coverage grades. James is tied for fifth among all safeties with four forced incompletions this season and opposing QBs have just a 74.4 passer rating when targeting him as the primary defender in coverage. He’s also one of 15 safeties who’ve recorded at least three tackles for loss (or no gain) in run defense, and he leads all safeties with 11 total pressures as a pass rusher. 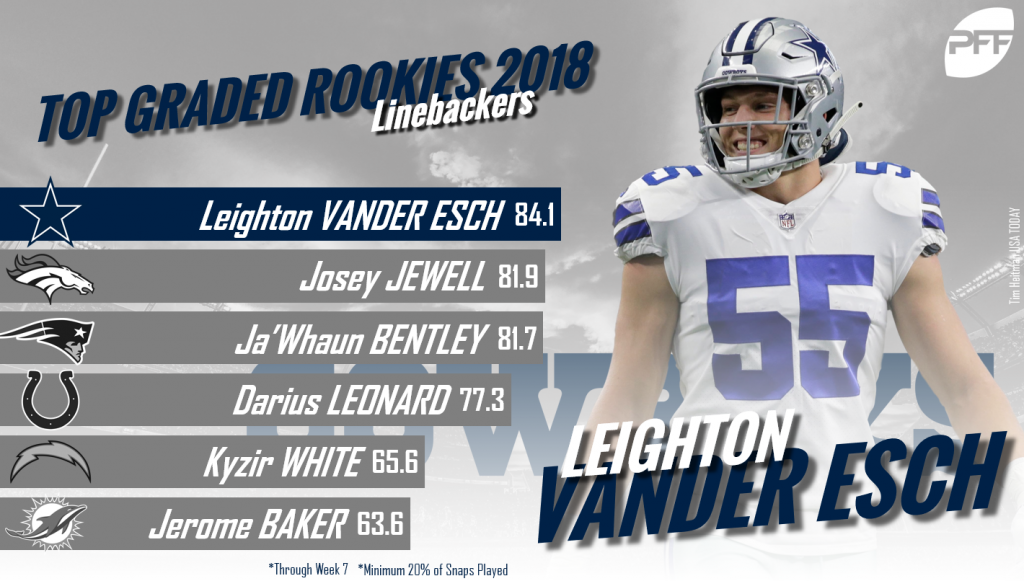 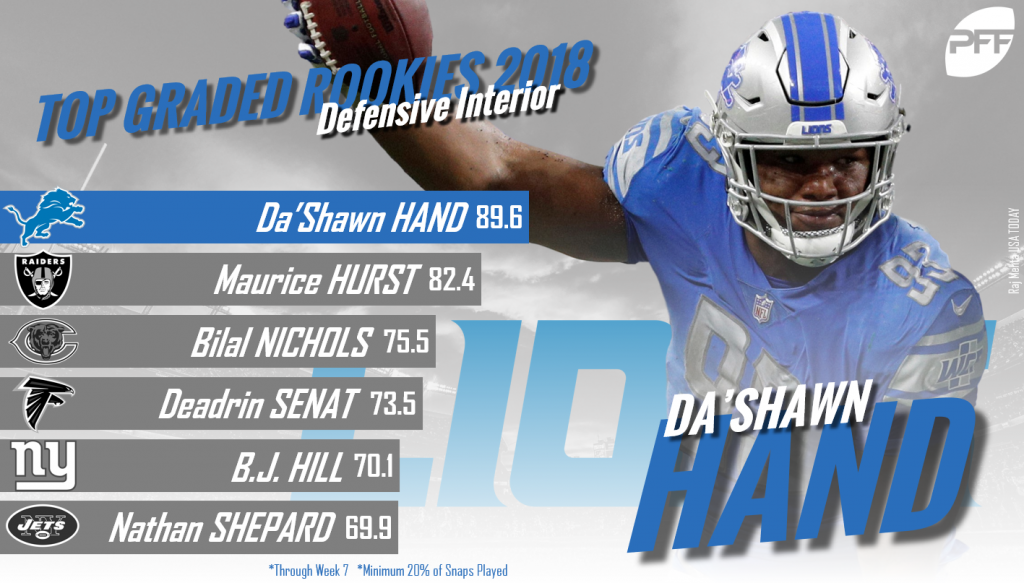 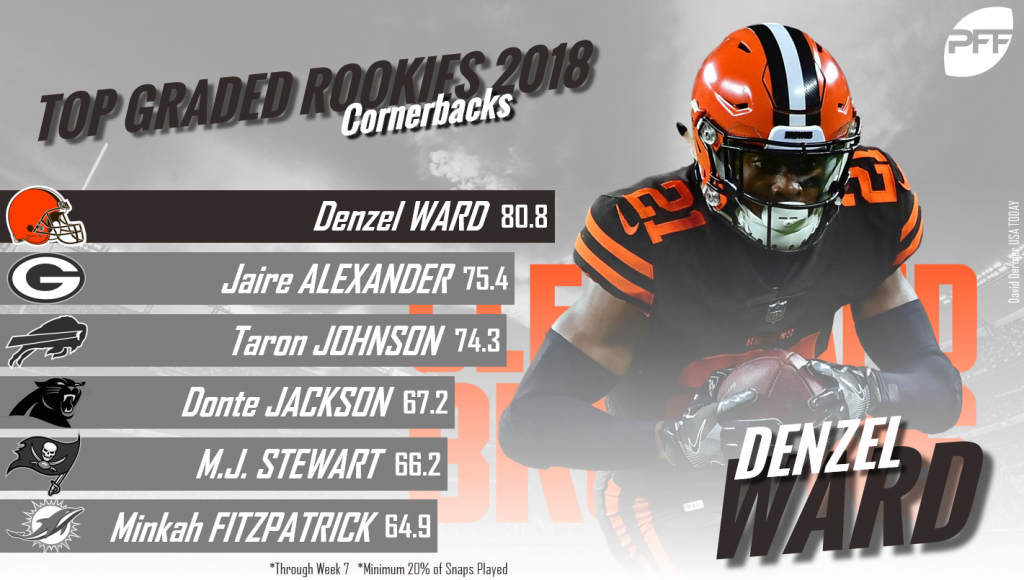 Out of the 121 cornerbacks who’ve played at least 100 defensive snaps this season, Ward ranks fifth in terms of overall grade, and he ranks third with an 85.4 coverage grade. Ward’s 13 combined forced incompletions and interceptions are the second-most by a corner this season and opposing quarterbacks have just a 61.3 passer rating when targeting him as the primary defender in coverage, the 14th lowest rating surrendered by a cornerback through seven weeks.

McGlinchey currently ranks ninth among 79 offensive tackles who’ve recorded at least 100 offensive snaps in terms of overall grade, and his 87.2 run blocking grade is nearly a tier higher than any other tackle league-wide (Terron Armstead is second at 80.4). The ninth overall pick has had some struggles in pass protection to start his career – his 95.8 pass-blocking efficiency rating ranks 52nd among tackles – but he’s shown some improvement, earning a 97.0 PBE over his last four games after posting a 94.7 PBE in Weeks 2 and 3 (omitting Week 1 when he played out of position at guard).

The second overall pick currently ranks sixth among running backs in terms of overall grade, and he’s one of just three backs this season who rank within the top-10 in both rushing and receiving grade. Barkley ranks fourth among backs in terms of elusive rating (ER measures the impact of a runner with the ball independently of the blocking in front of him by looking at how hard he was to bring down), and he’s earned 61.5% of his rushing yards on runs that went for at least 15 yards, the second-highest rate among all backs.

Hurst currently ranks 16th among the 117 interior defenders who’ve seen at least 100 defensive snaps this season in terms of overall grade, and he’s one of just 14 interior defenders who currently owns a run defense and pass-rush grade of at least 70.0. It took Hurst a couple of games to get acclimated to the NFL, but he’s graded north of 70.0 in every game he’s played since we entered Week 3. Hurst has shown an early penchant for getting his hands up to knock down passes at the line of scrimmage, as he’s currently tied for the lead among all interior defenders with three batted passes.

Ridley currently ranks 22nd among the 105 wide receivers who’ve seen at least 100 passing down snaps this season in terms of receiving grade. The first-round pick ranks 23rd among receivers with an average of 1.95 yards per route run, is second among receivers by converting 72.2% of his targets into either a first down or touchdown and the 12 combined first downs and touchdowns that he’s picked up on either third or fourth down this season are the fifth most among receivers.

Johnson ranks fifth among HBs in terms of overall grade and he, like Barkley, is one of three running backs this season who rank within the top-10 in both rushing and receiving grade (Barkley has more than doubled Johnson’s snap count to date if you’re currently wondering why Barkley is ahead of him on this list). Out of the 41 running backs who’ve run the ball at least 50 times this season, Johnson is tied for ninth with a first down/touchdown rate of 25.0% and his average of 3.4 yards gained after contact is tied for seventh.