Below is the 18th and first postseason installment of our weekly PFFELO rankings. Like all ELO systems, PFFELO is an iterative system that updates each team’s rating after each game based on two things: how well they played against their opponent and how well they were expected to play against their opponent. The PFFELO rating system measures the former using our unique offensive, defensive and special teams grades, while the latter is determined by the PFFELO ratings leading up to the game and where the game is played.

Here are our ranks for the 12-team playoff field as we head into the Wild Card round of the 2017 NFL playoffs:

The odds-on favorite to win their sixth Super Bowl in franchise history, the Patriots get a week off after handling the Jets in Week 17. For the second-consecutive season, PFF All-Pro QB Tom Brady finished as the league’s highest-graded quarterback, generating a passer rating under pressure that was more than 13.0 points better than any other quarterback. For the first time in a few years, he had a deep threat to complement the league’s best tight end down the middle. Brandin Cooks was second among all players in yards receiving on deep passes (608), with Rob Gronkowksi averaging 2.40 yards per route run, 0.35 better than the next-best tight end. To round it out, Dion Lewis has the fifth-most rushing yards in the league since Week 7 and was our 2nd-Team All-Pro running back, rounding out an offense that finished atop our rating system.

With the third-best offense in our rating system, the Steelers are the Pats’ only real rival in the AFC and carry a 25.4 percent chance of making the Super Bowl. Antonio Brown’s injury and their defense (the 24th best by our metrics) are their biggest concerns, but their depth offensively has really carried them of late, and could rival that of the Patriots if they meet in the AFC Championship Game. Juju Smith-Schuster is looking like a steal of the draft, surpassing 900 yards and scoring seven touchdowns despite a slow start to the season. Led by PFF All-Pro guard David Decastro, the Steelers offensive line is seventh-best in pass-blocking efficiency and eighth-best in run-blocking grades and given this stable of weapons, they should have as good a chance as any, so it just comes down to Ben Roethlisberger (the highest-graded passer in the league since Week 6) to convert.

The Vikings have given up zero meaningful offensive touchdowns since their Week 14 loss in Carolina, and finished the season with the highest-rated defense in our system. They did it with substantial balance, with no defensive players earning an overall grade below a 72.3 and legitimate superstars at every level – Everson Griffen (90.6), Linval Joseph (88.1), Xavier Rhodes (83.9), Anthony Barr (80.5) and Harrison Smith (98.8). With Philadelphia seemingly reeling, the door is open for Minnesota to be the first team to go to a Super Bowl at their home stadium. If their plus-supporting cast (one of the highest by our rankings) can continue to elevate the play of quarterback Case Keenum (85.4), they are the front-runner in the NFC.

By losing in Tampa last week, the Saints thwarted the Rams’ attempt to tank their way into a matchup with the Panthers, a team that the Saints have soundly beaten twice. As a result, the Saints have the best Super Bowl odds of all the non-bye-earning teams. With the league’s most-efficient pass-blocking offensive line, the league’s second-highest rated passer when kept clean and two backs who produced more than 1,500 yards from scrimmage, New Orleans certainly has the firepower to make a run. Couple that with the league’s sixth-highest rated defense in our system and a 40 percent share over our Rookie of the Year race, and Saints fans have something to be optimistic about for the first time since 2013.

The storyline for two weeks will be Nick Foles, and for good reason. He has completed only 54 percent of his passes for 5.0 yards per attempt since taking over the starting job, unable to get in sync with the likes of Zach Ertz (80.9), Alshon Jeffery (78.7) and Nelson Agholor (79.8), a supporting cast who helped turn Carson Wentz into an MVP candidate through the season’s first 14 weeks. If Foles cannot turn it around, Philadelphia will likely have to lean on their defense (seventh in our rating system) and a running game that gained over 2,100 yards on the ground to win games the “old-fashioned way.” We’re not sold.

While they did not secure the fourth seed like they wanted, they did get something of a quasi-bye week going into the playoffs by resting seemingly all of their starters. However, they drew the Atlanta Falcons, a team that our metrics have loved all season and the most playoff-experienced team the NFC has going. The matchups between elite-level running backs and speedy linebackers on both sides of the ball will be a storyline of the Wild Card weekend. The answer to whether Deion Jones (89.6) and De’Vondre Campbell (78.6) can slow Todd Gurley (92.0) and his average of 2.15 yards per route run is worth the price of admission, but a similar matchup between Mark Barron (66.0) and the combination of Devonta Freeman (83.6) and Tevin Coleman (74.8) makes for a good undercard.

The only NFC team making a return trip to the playoffs does so as the sixth seed, having wowed our metrics all year (they are the highest-graded team in the league) without really breaking through. Things eventually revert to expectation – but football is a low-sample game – meaning we may never see the Falcons actualize their potential for the 2017 season. That said, of the Wild Card teams, they have the best chance of making a run in the playoffs, having an edge at the quarterback position and throughout most of the defensive side of the ball against the Rams. If they are going to blow up, look for it to come from All-Pro WR Julio Jones, who, for the third-consecutive season, led the league in yards per route run (3.08).

It was a weird route to 10-6 – on the back of a five-game winning streak to start the season and a four-game winning streak to close it – but the Chiefs earned 10 or more wins for the fourth time in five years under Andy Reid. They faced the fifth-easiest schedule on their way there, and finished the season with our lowest-rated defense. Alex Smith’s best season was able to overcome that multitude of sins, however, as he led the league in passer rating in general, when kept clean and on deep passes. His 1,344 yards and 12 touchdowns when throwing deep led the league, providing a substantial diversion from his career trajectory and making their offense likely the only side in the AFC capable of challenging New England and Pittsburgh (should they make it out of the Wild Card round).

After finishing the season 1-3 against the other playoff teams in the NFC South, there are real questions as to whether the Panthers can compete now that we enter January. We’ve talked almost every week about Cam Newton’s inaccuracy, but it showed up again against the Falcons, where he failed to complete a pass when under pressure and completed just 41.2 percent of his passes overall. When their running game didn’t produce like it did in their first matchup with Atlanta (averaging just 3.6 yards a carry), their offense simply couldn’t keep up (even though Atlanta appeared more in love with field goals than winning the actual game). The Saints’ offense (fourth in our rating system) will present a similar challenge this weekend, a challenge we don’t think they are going to be able to meet.

The Jaguars limp into the playoffs having lost their last two games, and having generated a 10-6 record on the back of one of the league’s third-easiest schedule. Their fate in the playoffs was made a bit easier when the Ravens lost at home to Cincinnati on Sunday, as they match up pretty well with a possibly LeSean McCoy-less Bills team that also aims to win with a combination of a running game and defense (neither of which will be as good as what the Jags possess). If Blake Bortles (the league’s 17th-highest graded quarterback) and a stable of banged-up receivers can give the Jaguars anything in the passing game, we might see the Jaguars in the second round for the first time since they last made the playoffs in 2007.

Many of the things we said about the Jaguars, we could say about the Bills, although Buffalo has a better quarterback and a weaker running game and defense than Jacksonville. Tyrod Taylor, our 12th-highest graded quarterback, will likely have to make due without his best weapon on offense in LeSean McCoy. He’s gotten in sync with tight end Charles Clay of late, though, completing 6-of-7 targets to him Sunday in Miami for 64 yards. With the Jaguars’ stud cornerbacks likely handling what is a weak receiving corps for the Bills, it will be up to Taylor and Clay to move the ball, and the Bills’ 14th-highest rated defense to make enough plays to earn them their first playoff victory since 1995.

This is the first time we’ve written about the Titans all season, and for good reason. Having played one of the league’s easier schedules (including the easiest schedule of opposing offenses), the Titans simply aren’t as good as their 9-7 record suggests. Marcus Mariota, the highest-rated quarterback when using play action and the third-highest rated quarterback when pressured, has not been good when given more-stable situations. Mariota has thrown 13 interceptions from a clean pocket, tied with DeShone Kizer for the most in the league. While Kansas City’s defense is not good by any stretch, they have the horses to take advantage of such errant throws, throws that Mariota will have to avoid if the Titans are going to advance in the playoffs for the first time since 2003. 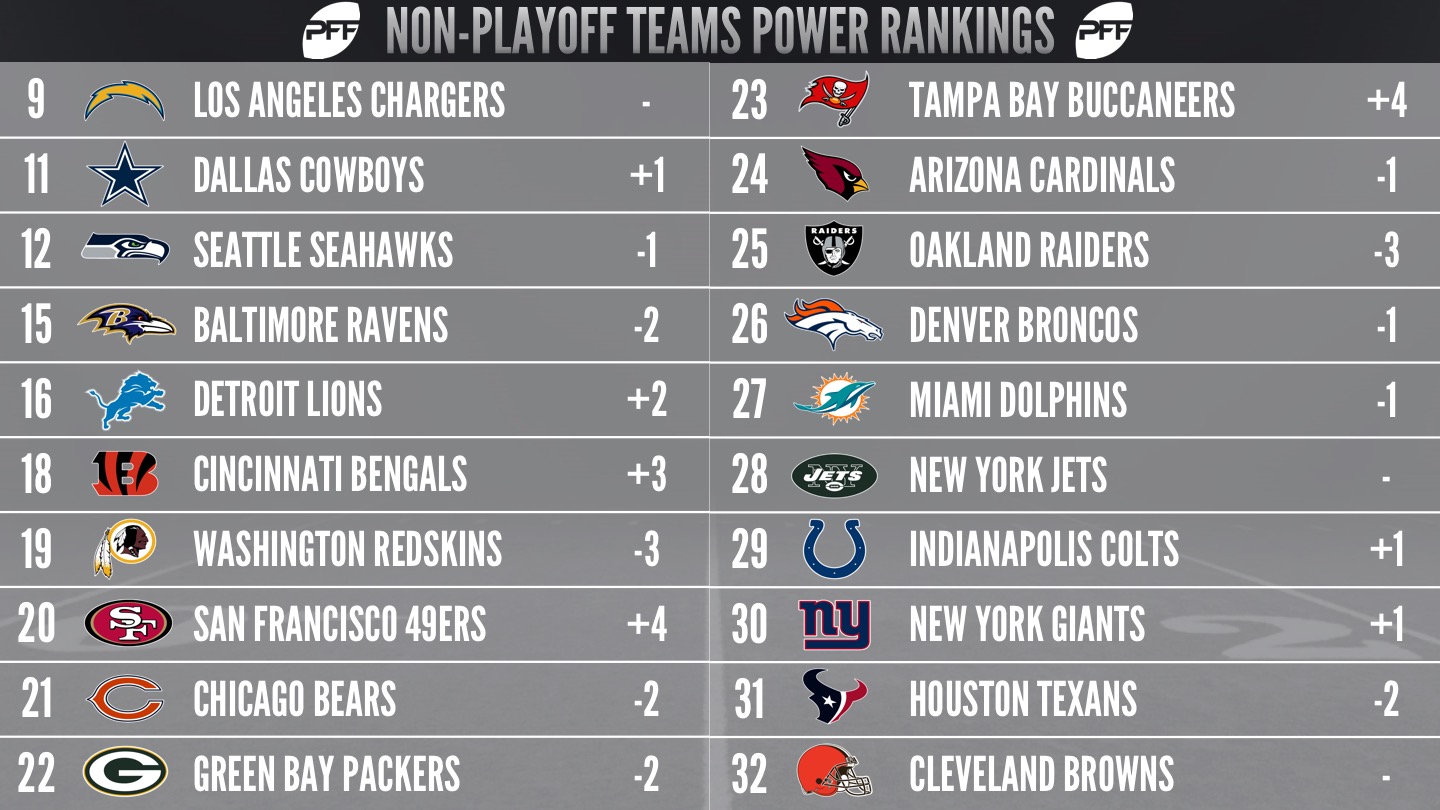