Below is the 15th installment of our weekly PFFELO rankings.  Like all ELO systems, PFFELO is an iterative system that updates each team’s rating after each game based on two things: how well they played against their opponent and how well they were expected to play against their opponent. The PFFELO rating system measures the former using our unique offensive, defensive and special teams grades, while the latter is determined by the PFFELO ratings leading up to the game and where the game is played.

The dam broke on the Patriots’ defense Monday night in Miami, as they surrendered 122 yards on the ground after contact to Dolphins running back Kenyan Drake (4.9 per carry). This wasn’t even their biggest issue, as Jay Cutler (pressured on just nine of 41 dropbacks) was able to generate a 133.1 passer rating when clean, finding success both underneath and over the top of what was an improving Pats defense. This week’s game doesn’t get any easier, as they draw the arguably the best wide receiver and running back in the game Sunday afternoon in Pittsburgh.

Speaking of defensive woes, the Steelers had their fourth-consecutive tough outing on that side of the ball against a Ravens team that no one is confusing for the 1989 49ers. Replacing the injured Ryan Shazier on Sunday night against the Ravens, inside linebacker Sean Spence missed three tackles, had zero stops and allowed a touchdown into his coverage on 34 snaps. Ravens running backs Danny Woodhead, Alex Collins, Javorius Allen and Patrick Richard were able to compile 113 combined receiving yards on just nine receptions, including a touchdown. The Patriots have that strength in spades and will likely test that weakness in the Steelers defense this week as well.

As our colleague Sam Monson wrote earlier this week, the Eagles have positioned themselves better than most to deal with an injury to the quarterback position. Sunday provided a microcosm of how they can continue to win with Nick Foles behind center. A suffocating pass-rush of Chris Long (one sack, four hurries), Brandon Graham (six total pressures) and Fletcher Cox (five total pressures) forced a key turnover and put their depleted offense (without left tackle Jason Peters as well) in an advantageous spot to take the lead in a game where their starting quarterback left the field while trailing. With a relatively easy schedule upcoming, it will be important for the Eagles to secure home field and the best possible platform from which to move forward.

After a setback against the Vikings, the Falcons survived last Thursday night on the back of an impressive defensive performance against an explosive Saints offense. Linebacker Deion Jones was all over the place, generating five stops, one pass breakup and a game-clinching interception. The Falcons still have an inside path towards winning the NFC South, with games against Tampa Bay, New Orleans and Carolina left on their schedule. Their 2-1 record against the NFC South (Panthers are 2-2 in the division) and their head-to-head victory over the Saints means that the division is theirs if they win out, a possibility made better if Matt Ryan stays away from the turnover-worthy plays that plagued him last Thursday night in Mercedes Benz Stadium.

While the Saints have had a couple road setbacks the last two weeks, the underlying structure is there for them to make a run. While a head-to-head loss in Week 1 to the Vikings might keep them from a first-round bye, if they can win out they will secure their first NFC South division title since 2011. While Alvin Kamara (90.0) has been a revelation offensively, rookie cornerback Marshon Lattimore (90.2) is likely the most responsible for the turnaround (as, statistically, cornerbacks are more valuable than running backs – even pass-catching ones). While Lattimore gave up 73 yards to Julio Jones Thursday, he also had an interception (his third on the year). He’s currently allowing just a 45.3 passer rating into his coverage, which is the third-best mark in the league.

While many will view the loss in Carolina as a setback, Sunday was the third road game in as many weeks for the Vikings, and even though they were hit in the mouth a few times by Cam Newton and Jonathan Stewart on the ground, they never blinked – tying the game at 24 with only a few minutes to play before eventually losing. They’ve withstood multiple injuries throughout the season, but it appeared that missing Mike Remmers, Riley Reiff and Pat Elflein at various stages against the Panthers made things substantially difficult on them offensively. Case Keenum was pressured on 24 of his 55 dropbacks (43.6 percent, against a season average of 38.2 percent) resulting in a passer rating of 67.7 on said dropbacks (his season average was 75.7 going in). Vikings pass-catchers were also responsible for five drops (11.4 percent, highest of the week), a substantial uptick from their league-low 2.8 percent drop rate on Keenum passes going into the game.

Another dominating performance for the Chargers against Washington on Sunday has them squarely in position for their first AFC West division title since 2009. Their defense has been nothing short of fantastic, with all five starting defensive backs earning a PFF player grade above an 80.2, and both edge defenders earning grades above 90.0. On a yards-per-play basis, the Chargers are only 15th in the league, due to allowing the second-most yards per carry (4.7) to opposing teams. This, coupled with their 22nd-highest yards per carry offensively, further underscores the lack of value inherent in the running game in the current NFL.

The Rams missed a big opportunity at home against the Eagles on Sunday, surrendering a four-point lead (and the ball) to a backup quarterback in the second half. The Rams struggled against Philadelphia’s middle-of-the-field attack as Carson Wentz threw for 170 yards and two touchdowns in between the numbers. Their special teams remained special, scoring their third touchdown of the season on a blocked punt. However, touchdowns like these, and those they had against the Jaguars, are more noise than signal over the course of a season. They’ll need to answer the Seahawks drive-for-drive this week in a way they simply couldn’t down the stretch against the Eagles if they want to continue leading the NFC West.

Speaking of disappointing losses, if the Seahawks miss out on securing their fifth NFC West title in six years, they’ll probably look to last week’s loss in Jacksonville as a main culprit. Even with their defense allowing 424 yards (including 154 on the ground) and their MVP-candidate quarterback Russell Wilson throwing three interceptions (all on passes more than 20 yards downfield), they were still in the game into the waning moments, speaking to Wilson’s ability to turn games on a dime with his high rate of big time throws. Against the Rams, they’ll need to incorporate tight end Jimmy Graham more into their offense (he had zero receptions on two targets last week), as the Rams allowed three touchdowns to tight ends against a Zach Ertz-less Philadelphia team a week ago.

The Panthers continue to hang around, beating Minnesota 31-24 on the back of Jonathan Stewart’s 103 yards (on 6.4 a carry) and Cam Newton’s 70 yards (6.4 a carry) on the ground. While Newton continues to struggle with accuracy, with the second-worst adjusted completion percentage among quarterbacks in Week 14 (60.9 percent), the Panthers continue to have success, scoring 31 points or more for the third time in four tries. Like the Falcons and Saints above them (in this rating), the Panthers will likely control much of their own destiny over the next few weeks, with games against the Packers, Buccaneers and Falcons deciding whether they will return to the playoffs for the fourth time in five years. 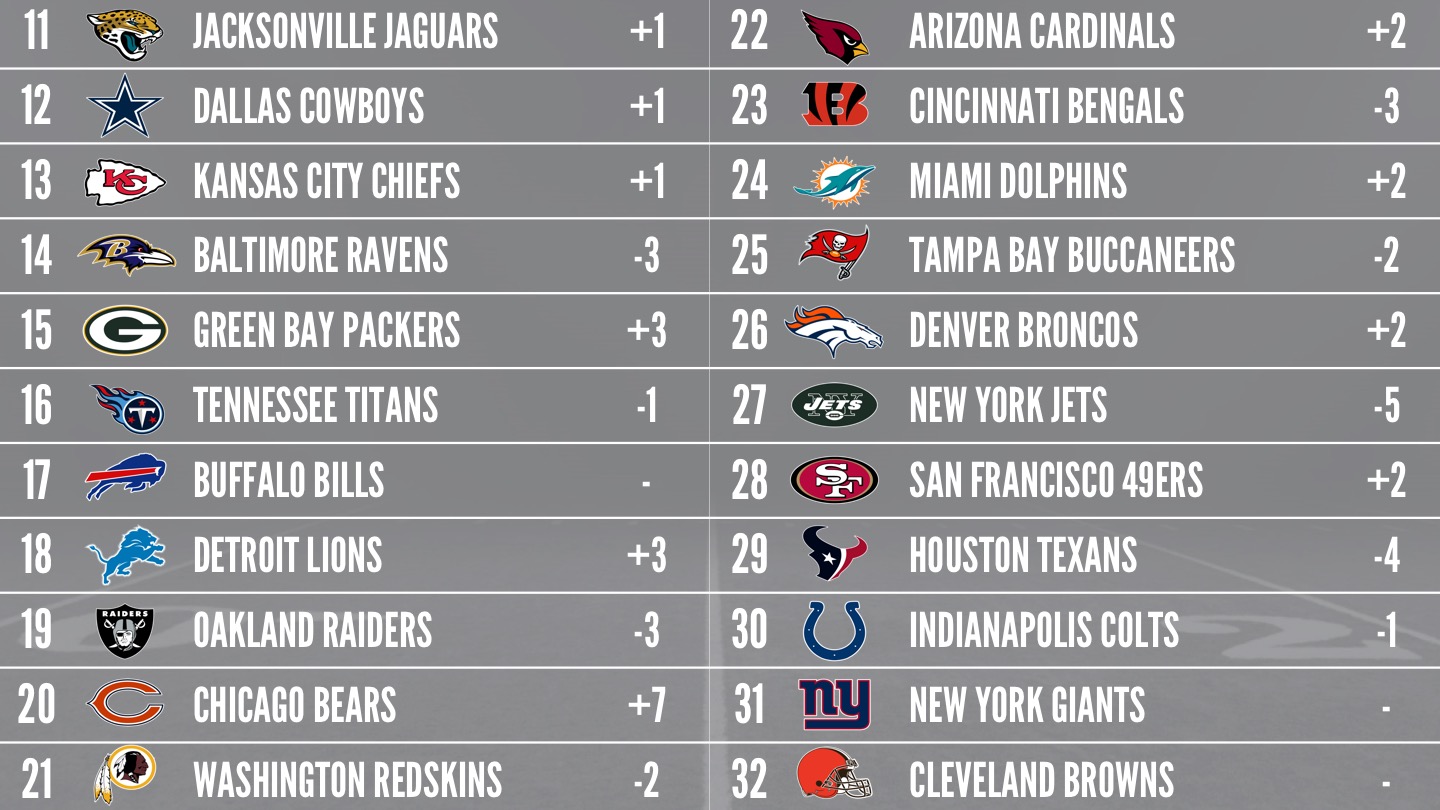