The Dallas Cowboys financial commitment to their offensive line will likely continue to shape their roster and draft decisions, and as a result, they'll likely place a great emphasis on marrying value of a player with the value of the salary cap hit. Dallas has had rookies on the field for over 2,200 snaps each of the past five seasons and aren't afraid of playing rookies at significant roles, i.e. Ezekiel Elliott, 2016; Chidobe Awuzie, 2017.

With the departing Dez Bryant leaving a large gap at wide receiver, there is now a new need in Dallas for pass-catching options to surround QB Dak Prescott with. They brought in Allen Hurns via free agency but don't rule out one of the draft class' top receiver options in the first round. In total, Dallas received four compensatory picks in 2018, which ties a league high and include a fourth-round pick (137) two fifth-round picks (171, 173) and a sixth-rounder (208). How they'll use those picks remains to be seen, but with their recent track record of successful draft picks, it's almost a given that we'll see rookies making impacts in Dallas this fall. 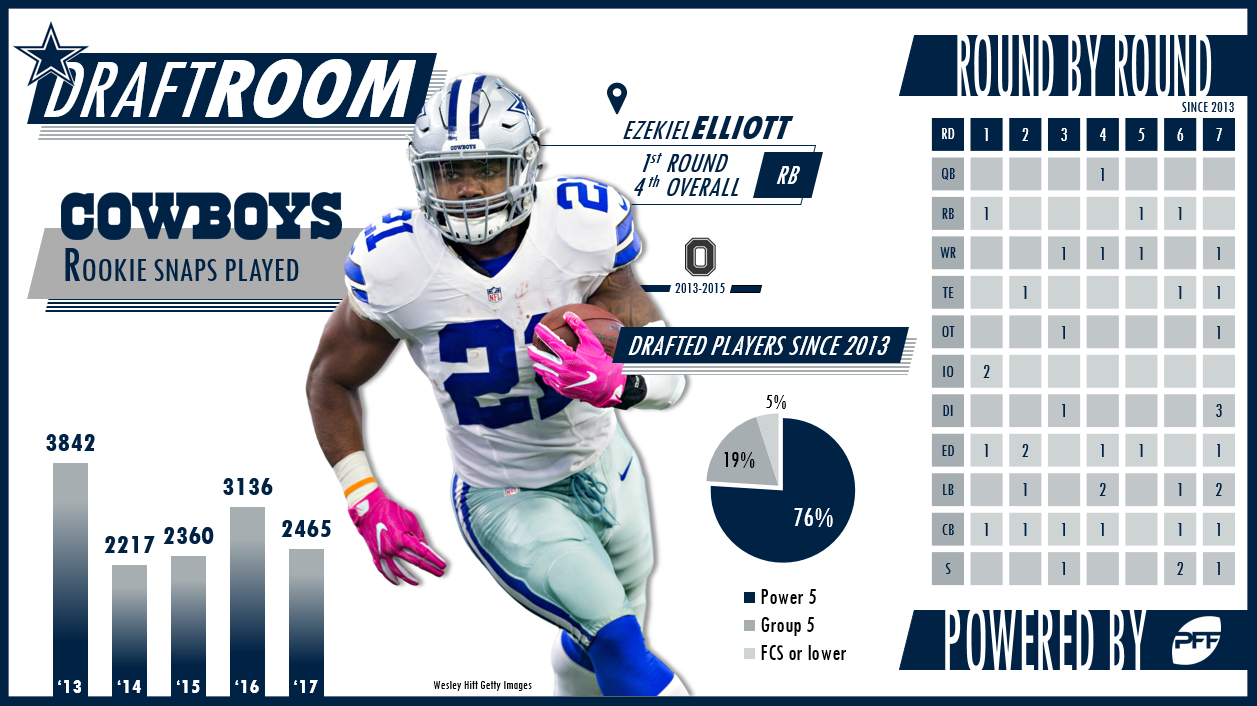 Using our Wins Above Replacement (WAR – roughly the number of wins a team gets from replacing an off-the-street player with the player of interest) metric as a model, here's how the Cowboys’ draft classes stacked up league wide from 2013-2017.

Overall WAR of drafted players for the Cowboys: 1st

Was the league’s highest-graded guard in 2017.

Was the league’s second-highest-graded center in 2017.

The versatile Jones has broken up 17 passes in three seasons, while generating 69 stops in the process.

Led the NFL in rushing as a rookie.

Most famous for when he allowed four sacks, seven hurries against Atlanta in Week 10 of 2017.

Picking at No. 2 overall, the New York Giants have a lot on the table to answer with their selections. With quarterbacks aplenty at the top end of the draft available, they'll likely have their choice of one of their top two options after Cleveland at No. 1. Whether new General Manager Dave Gettleman opts to take a quarterback at No. 2 remains to be seen, new head coach Pat Shurmur may be looking towards the future, one that has maybe seen the best of current QB Eli Manning‘s career in the rearview.

Selecting second overall is one thing, but not selecting again on a roster full of holes is another and expect the Giants to be trade components in this year's draft under a new regime, something old Giants' front offices weren't too keen on. They've played rookies on nearly 3,000-plus snaps over the past four seasons (2017 saw 2,968) so youth injected into the starting lineup should not be a shocker in New York. 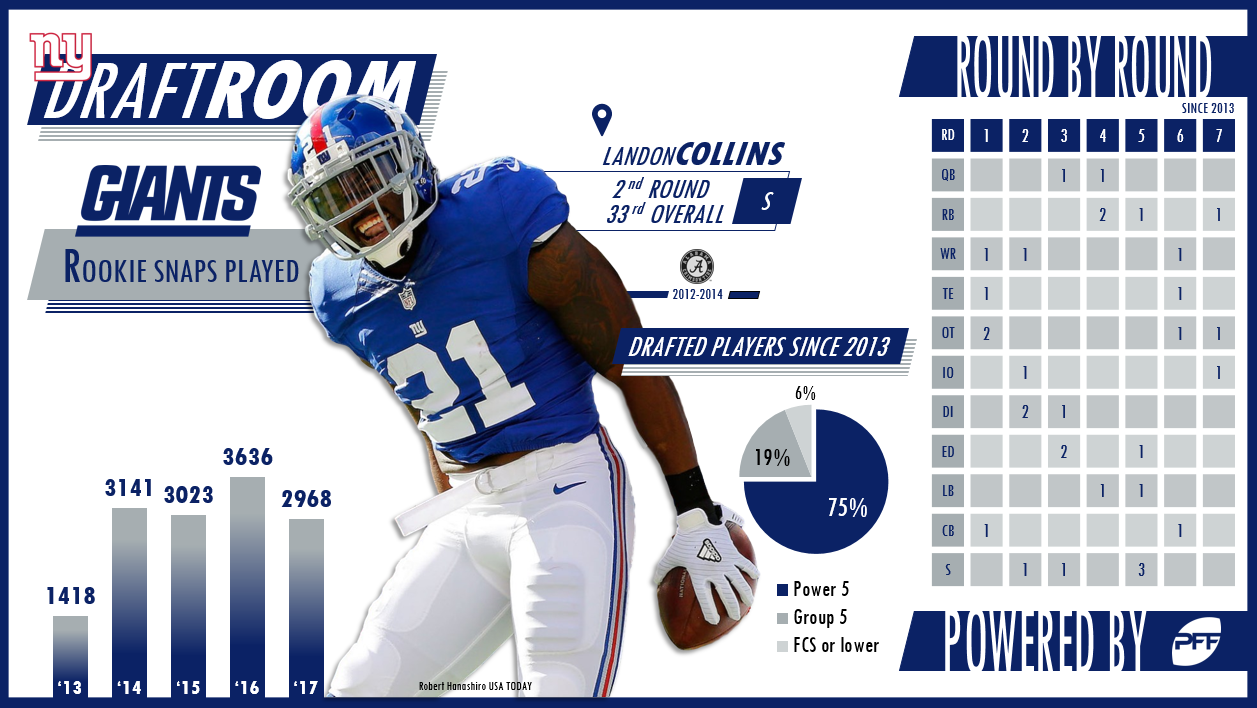 Using our Wins Above Replacement (WAR – roughly the number of wins a team gets from replacing an off-the-street player with the player of interest) metric as a model, here's how the Giants’ draft classes stacked up league wide from 2013-2017.

Overall WAR of drafted players for the Giants: 13th

One of the league’s best receivers since he set foot on an NFL field. Just a year removed from 105 receptions, 30 missed tackles on receptions and his third straight 10-plus touchdown season.

Terrific as a run-defender in 2017 as a rookie, earning an 86.5 PFF grade in that department.

Was a consistent performer, especially against the run, for the Giants, generating 84 stops during that time period.

PFF grades above 78.4 each season until 2017, where he struggled. Left for Arizona in the offseason.

Dropped 11 passes and earned just a 35.4 run blocking grade as a rookie.

PFF grade has improved each season, but his highwater mark to this point has been a 51.5.

Averaged only 2.1 and 1.8 yards per carry after contact his first two (and only) two seasons in New York.

Averaged just 1.12 yards per route run in his career.

The defending Super Bowl Champion Philadelphia Eagles will still be feeling the effects of the Carson Wentz trade in terms of draft capitol, however if Wentz can get back to form he showcased before injury, it's more than something Philly fans can likely live with. Their defense will look mightily different following last year's Super Bowl run after losing several key components and bringing in replacement players during free agency, however Eagles' brass has vocalized their desire to build along the defensive and offensive lines.

They play value in film and production on the field rather than testing metrics, and that has seemingly worked out for them in the long run (albeit, our PFF data is now predicting such success). With Torrey Smith out at wide receiver and Nelson Agholor‘s shift inside (successful shift at that), there is the need for an outside wide receiver if the Eagles so decide to fill it. 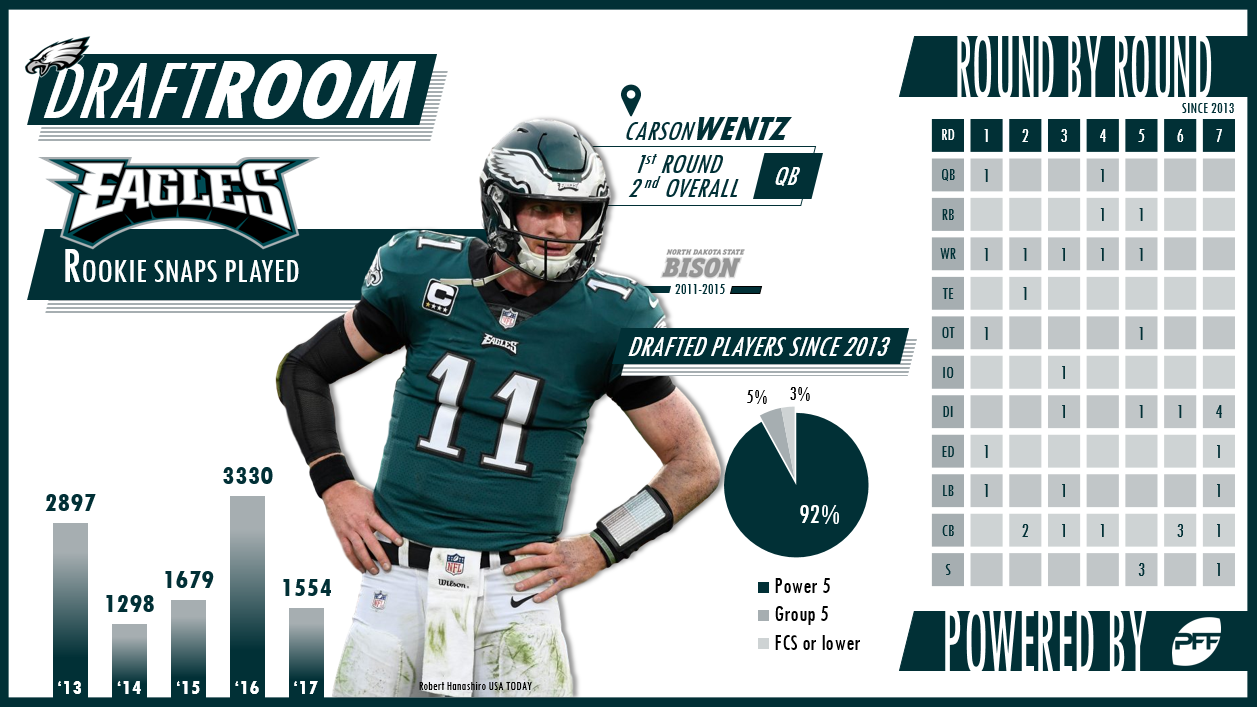 Using our Wins Above Replacement (WAR – roughly the number of wins a team gets from replacing an off-the-street player with the player of interest) metric as a model, here's how the Eagles’ draft classes stacked up league wide from 2013-2017.

Overall WAR of drafted players for the Eagles: 19th

Wentz ascension from a middling rookie (78.3 PFF grade) to a top-10 signal-caller (87.6) was one of the reasons the Eagles were in position to make a Super Bowl run when he injured his knee.

While struggling as a blocker, Ertz has been a dynamic weapon in the passing game from Day 1, generating 3878 receiving yards during his career (including playoffs).

Likely the league’s best right tackle, earning PFF grades of 83.9 or better each of the last four seasons.

Injured for much of 2017, Hicks has been a great coverage linebacker when healthy, besting all linebackers in yards per coverage snap allowed (0.39) in 2016.

Will always be remembered for his play that clinched the Eagles’ first Super Bowl title.

Was just the 72nd-highest-graded tackle when replacing Jason Peters in 2017.

Entering the Alex Smith era at QB in our nation's capital, the Washington Redskins and team president Bruce Allen and Co. will be an interesting team to watch in the draft for a multitude of reasons. Smith isn't the youngest of signal-callers in the league but he is the answer for now, and the team could decide to build around him for the foreseeable future. Last season, Washington spent their first four picks on the defensive side of the ball but with the loss of Pierre Garcon and DeSean Jackson in 2017, their offense lacked a season ago and they could look to answer the questions at pass-catchers this draft as well as help along both offensive and defensive lines.

Jonathan Allen should return healthy and bolster a front-seven who ranked dead last in run-defense as a unit last season, while the team will also suffer from the loss of breakout star in CB Kendall Fuller (who was traded for Smith). 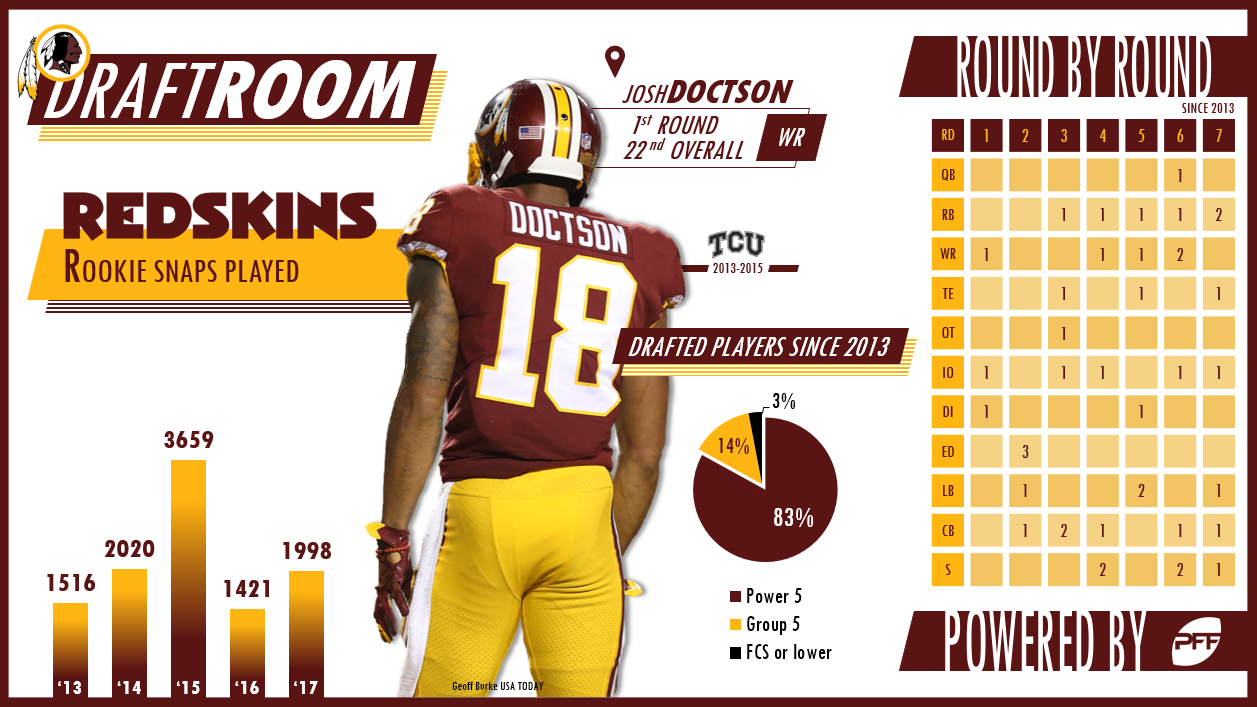 Using our Wins Above Replacement (WAR – roughly the number of wins a team gets from replacing an off-the-street player with the player of interest) metric as a model, here's how the Redskins’ draft classes stacked up league wide from 2013-2017.

Overall WAR of drafted players for the Redskins: 15th

Was a top-graded cornerback playing predominantly in the slot in 2017.  Was traded with a third-round pick to Kansas City for Alex Smith this offseason.

Allowed a 95.6 passer rating during his only regular-season action in 2014.

Rambo lasted just two years in Washington, where he had almost as many missed tackles (11) as stops (13).

Averaged just 1.08 yards per route run during his career. Left in the offseason to join the Colts after initially agreeing with the Ravens.

The 2016 first-round pick was 76th among qualifying receivers in efficiency in 2017, averaging just 1.10 yards per route run while generating just 3.7 yards per catch after the catch.