New general manager Brian Gaine will have his work cut out for him with head coach Bill O'Brien during the 2018 NFL Draft as the Houston Texans do not currently possess a first- or second-round pick, but they do have their quarterback of the future in Deshaun Watson. While they do not have an early round selection (see Cleveland Browns draft room feature), Houston did receive a third-round pick from the Duane Brown trade with Seattle last season.

With that Brown trade, the Texans have arguably one of the biggest needs across the board of any NFL team in bolstering their offensive line that dead last in pass-blocking and 31st in run-blocking a season ago. 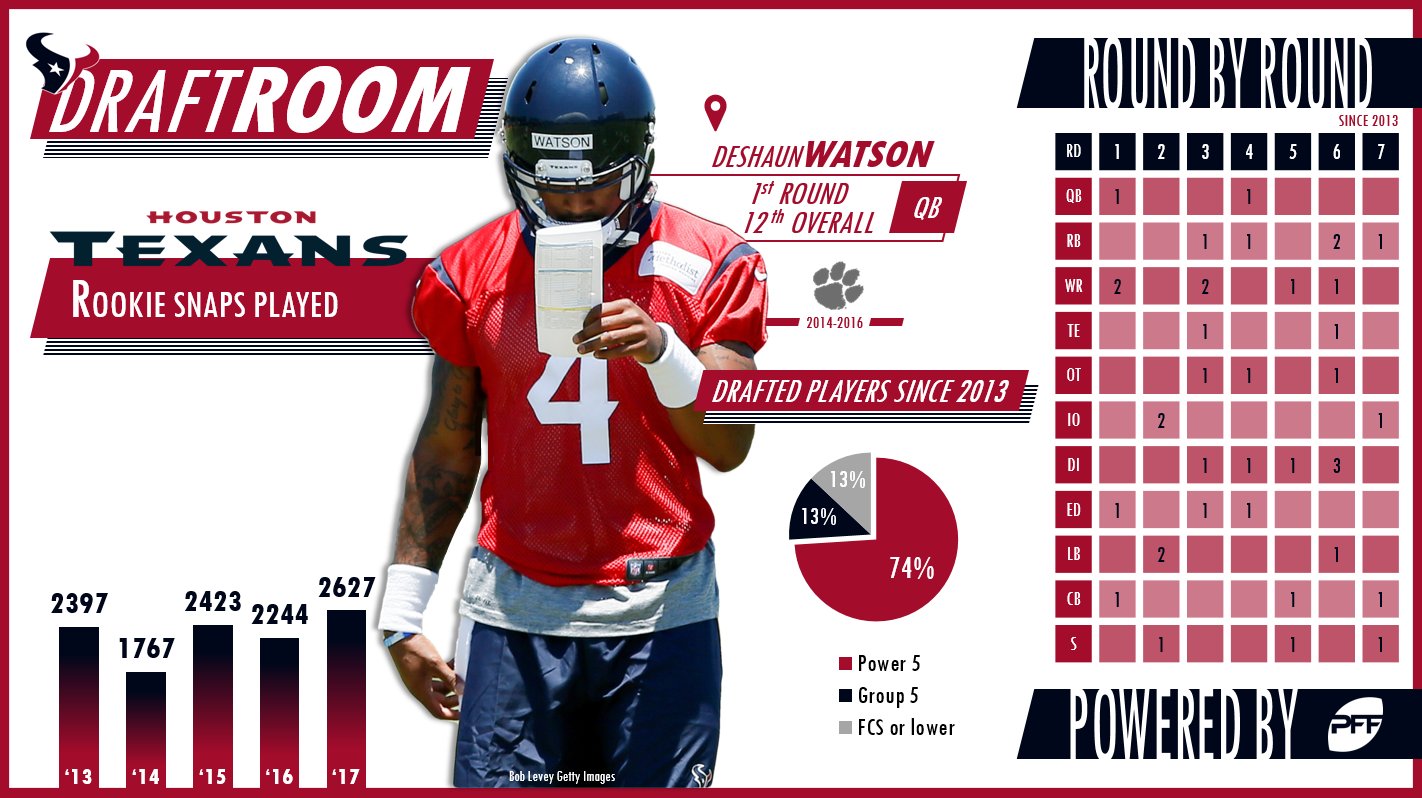 Using our Wins Above Replacement (WAR – roughly the number of wins a team gets from replacing an off-the-street player with the player of interest) metric as a model, here's how the Texans’ draft classes stacked up league wide from 2013-2017.

Overall WAR of drafted players for the Texans: 16th

Has become one of the best wide receivers in the NFL.

After injuries plagued his career early on, Clowney has generated 14 sacks, 28 hits, 80 hurries and 78 stops the last two years.

Performed well as a rookie, earning a 80.6 PFF grade.

Has averaged just 7.7 yards per catch through 55 targets and two NFL seasons.

Never earned a 50.0 PFF grade through four seasons before leaving for Tennessee in the offseason.

Four straight seasons with a PFF grade of 53.6 or less.

General manager Chris Ballard's second draft with the Indianapolis Colts will see him select sixth overall among a myriad of questions surrounding the quarterback position for the franchise. Will Andrew Luck play or won't he next season? That being said, regardless of who is under center (Luck or Jacoby Brissett), Indianapolis and new head coach Frank Reich will likely stay true to their draft board, even if that results in a lopsided draft towards one side of the ball.

Ballard has already moved back from No. 3 overall pick in a trade with the New York Jets, picking up two second-round picks in exchange for moving down to No. 6 as in all likelihood a quarterback will be drafted with the third pick this year. Indianapolis as a team are lacking in several spots but most notably on offense where their only unit of plus-grades came on run-grades, and largely in part to Frank Gore, who is now with Miami. A strong candidacy of players can be appealing at No. 6, but there is also a drop off in the secondary, where a stout cover corner could go a long way in bolstering the Colts defense for a long time to come. 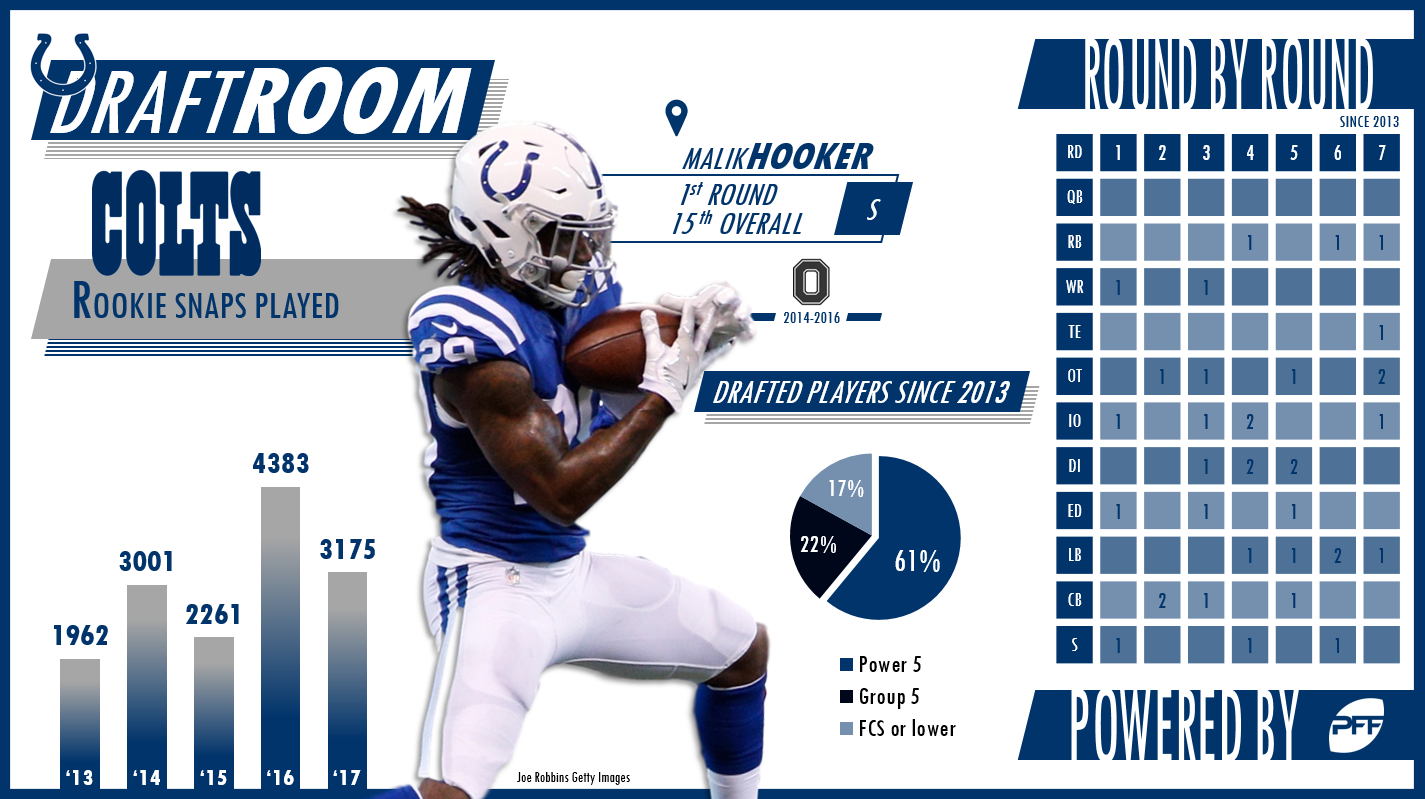 Using our Wins Above Replacement (WAR – roughly the number of wins a team gets from replacing an off-the-street player with the player of interest) metric as a model, here's how the Colts’ draft classes stacked up league wide from 2013-2017.

Overall WAR of drafted players for the Colts: 30th

A PFF favorite for some time, Anderson has been very productive when he’s played, generating 47 stops and 55 total pressures in 1140 career snaps.

In 402 snaps as a rookie, Wilson made 11 stops, three pass breakups and an interception.

Before getting injured as a rookie, Hooker picked off three passes and defended another in the Colts’ new-look secondary.

Before falling off in 2017, Mewhort had three seasons with PFF grades above 77.1.

Before being traded to the Patriots for Jacoby Brissett, Dorsett hauled in just 51-of-92 targets in two seasons, dropping five of those targets in the process.

Morrison was 83rd among 87 qualifying linebackers in PFF grades in 2017.

Hairston struggled as a coverage man in the slot in 2017, allowing a 93.1 passer rating into his coverage and missing three tackles in the process.

Under former head coach and current executive vice president of football operations Tom Coughlin, the Jacksonville Jaguars are fast-improving and focusing less on college production and more on specific positional upgrades at their draft spot (re: Leonard Fournette and Cam Robinson a year ago). General manager David Caldwell and head coach Doug Marrone were each given contract extensions after a playoff run last season that saw them nearly run to the Super Bowl, the Jaguars decision-makers will have some roster spots to fill after free agency.

Blake Bortles is seemingly the answer (at least for now) at quarterback after giving him a three-year contract extentions and the team will need to once again surround him with a strong supporting cast. They've added the league's best available guard in free agency by signing Andrew Norwell but still have needs at wide receiver and tight end as viable pass-catching options. Their defense is locked up from a season ago, despite the loss of veteran LB Paul Posluszny, as the unit ranked first overall in defensive grades, first in pass coverage and in the top-6 in both run-defense and pass-rush. 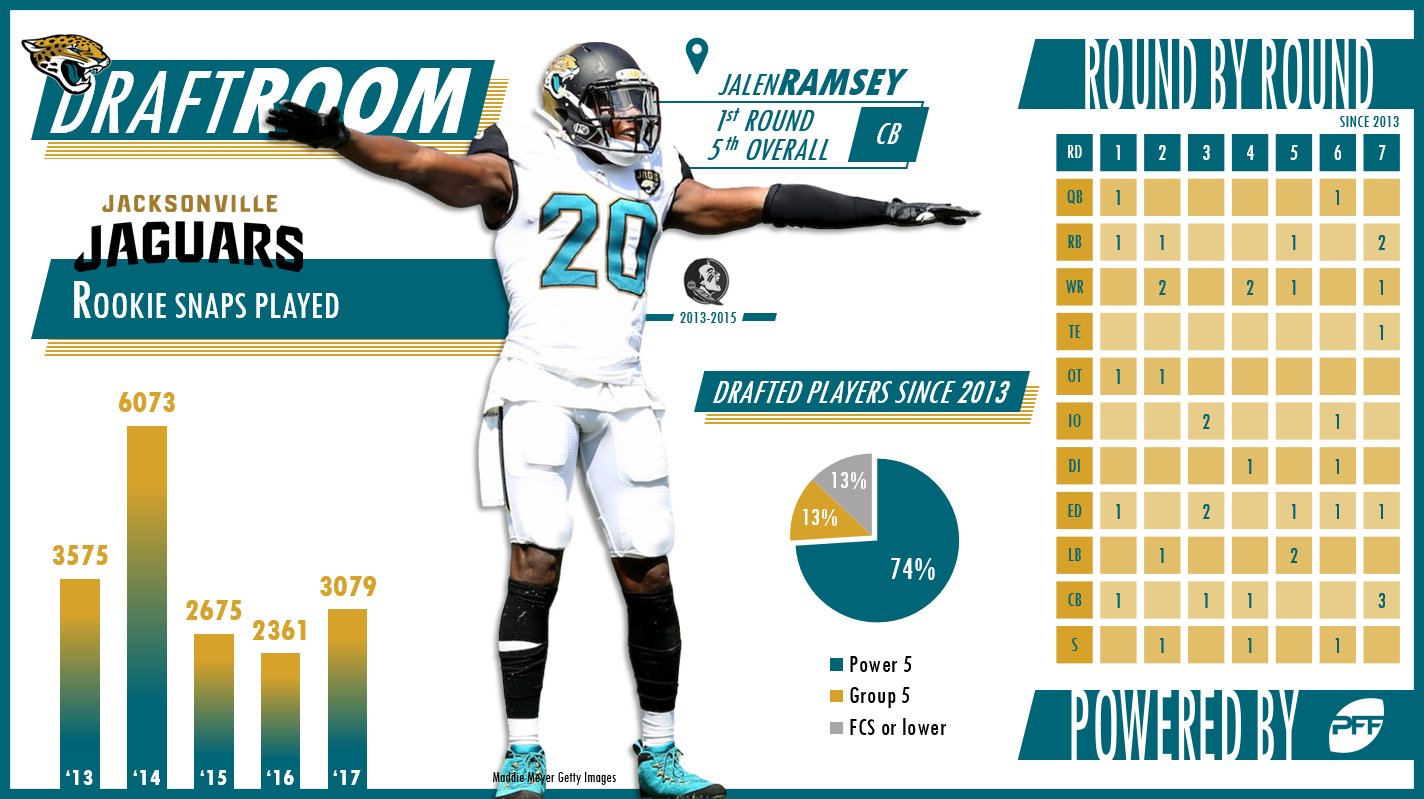 Using our Wins Above Replacement (WAR – roughly the number of wins a team gets from replacing an off-the-street player with the player of interest) metric as a model, here's how the Jaguars’ draft classes stacked up league wide from 2013-2017.

Overall WAR of drafted players for the Jaguars: 25th

Was the second-most valuable cornerback in the NFL a season ago.

Provided more value through the air than expected (348 yards after the catch), while struggling on the ground (3.9 yards per carry).

Has gotten better each year, generating an outrageous 65 stops in 2017 (second among linebackers).

Knee injury was a concern, but Jack has played well through two seasons, especially in coverage – earning the eighth-best grade in that department among his position group in 2017.

77th among 81 tackles in PFF grades as a rookie.

Caught just 34-of-63 targets his rookie season, dropping four in the process.

The Tennessee Titans under general manager Jon Robinson will once again look to build around face of the franchise, quarterback Marcus Mariota as they've done so in the past three drafts. They've secured bookend tackles to protect Mariota in Taylor Lewan and Jack Conklin and drafted (who the jury is still out on) talented pass-catchers a season ago in WR Corey Davis, WR Taywan Taylor and TE Jonnu Smith. However, with new defensive-minded head coach Mike Vrabel, there is also the chance they start building up on an aging defense.

Despite some strong play by then-rookie Adoree' Jackson and a breakout season by Kevin Byard, the Titans still ranked just 22nd in pass coverage grades as a team last year, so the option to improve their secondary is a strong candidate. The Titans have long since placed value on player evaluations over strength of competition as they've selected 12 percent of their players from FCS schools or lower in the past five drafts, including from schools such as Southern Utah, Tennessee State and Villanova to name a few. 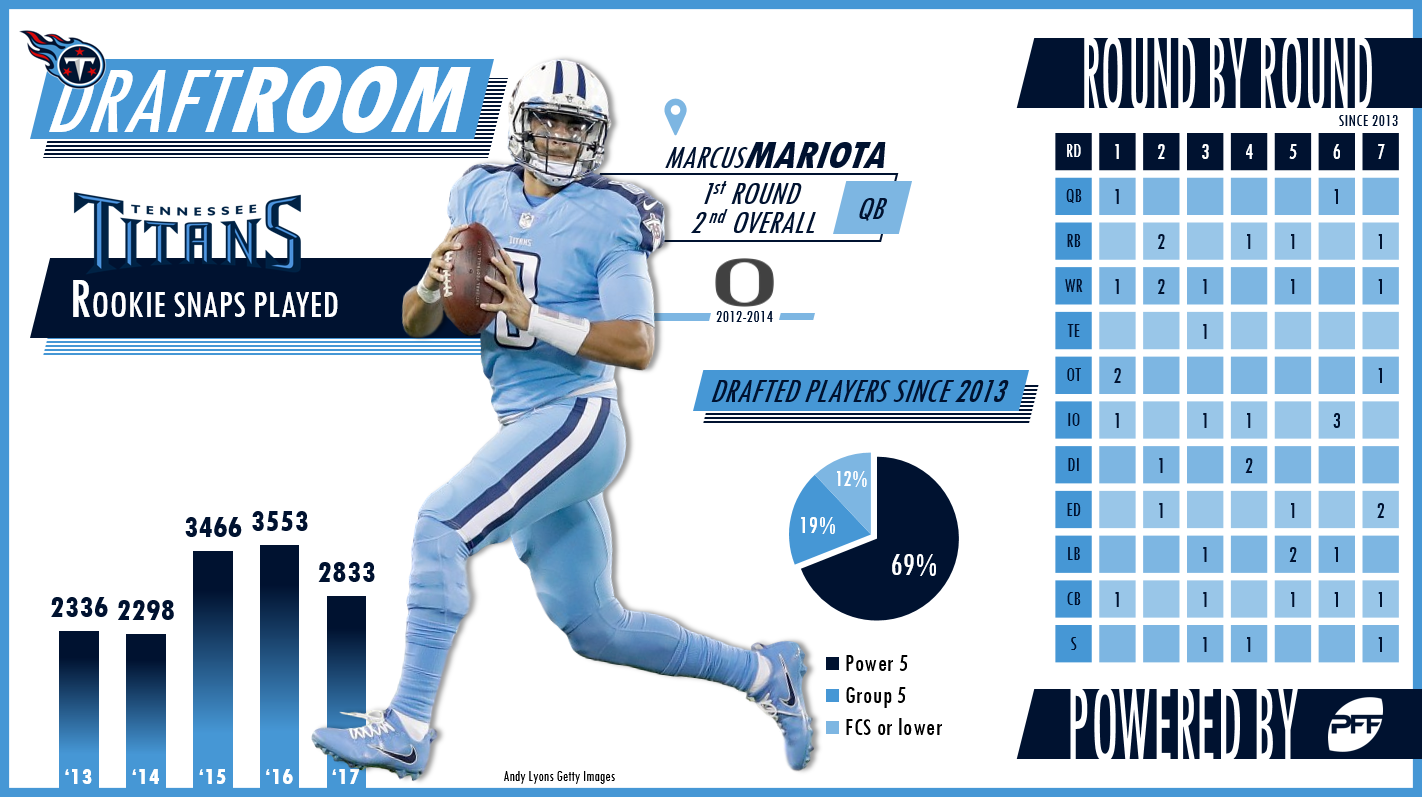 Using our Wins Above Replacement (WAR – roughly the number of wins a team gets from replacing an off-the-street player with the player of interest) metric as a model, here's how the Titans’ draft classes stacked up league wide from 2013-2017.

Overall WAR of drafted players for the Titans: 21st

Ran into some bad luck interception-wise in 2017.  Like his draftmate, Jameis Winston, Mariota has been a second-tier quarterback in our system since Day 1.

Added a ton of value as a cornerback and a returner, where he was a top-four graded player in the league as a rookie.

Although unbeknown to Deion Sanders, Byard was terrific in his second season, intercepting eight passes and getting his hands on seven others.

Graded above an 81.8 in each of his two NFL seasons.

Graded above a 78.1 in each of his four NFL seasons.

Threw more interceptions (14) than touchdowns (12) in two years of play with the Titans.

Graded poorly during his only season of action (2015), allowing 20 total pressures in just 326 pass-blocking snaps.

A surprise starter in 2016, Sharpe caught only 53.2 percent of his targets that season and averaged just 2.1 yards after the catch when he did convert.

Was the league’s second-lowest-graded tight end as a rookie.