Very quickly, we're already four weeks into the 2018 NCAA football season. Games have come, games have gone and we've been left with a list of breakout stars making names for themselves early in the season to sift through.

With our play-by-play grading of every player of every FBS game, we have a wealth of data at our fingertips to not only analyze but postulate a list of top 10 breakout stars across college football.

Taking out quarterbacks (who will get their own list later), here are the top 10 stars who are making their names known across the FBS landscape:

Williams not only tops the list of breakout stars, but his 94.7 overall grade also tops ALL FBS defensive players this season. He's been a menace to opposing offensive lines all season long, racking up 11 QB pressures and all 12 of his solo tackles have been for a defensive stop. Throw in a batted pass at the line of scrimmage for good measure and you've got yourself a player wreaking havoc from the defensive interior that's allowed Alabama fans to move on from Da'Ron Payne and Da'Shawn Hand, quickly. 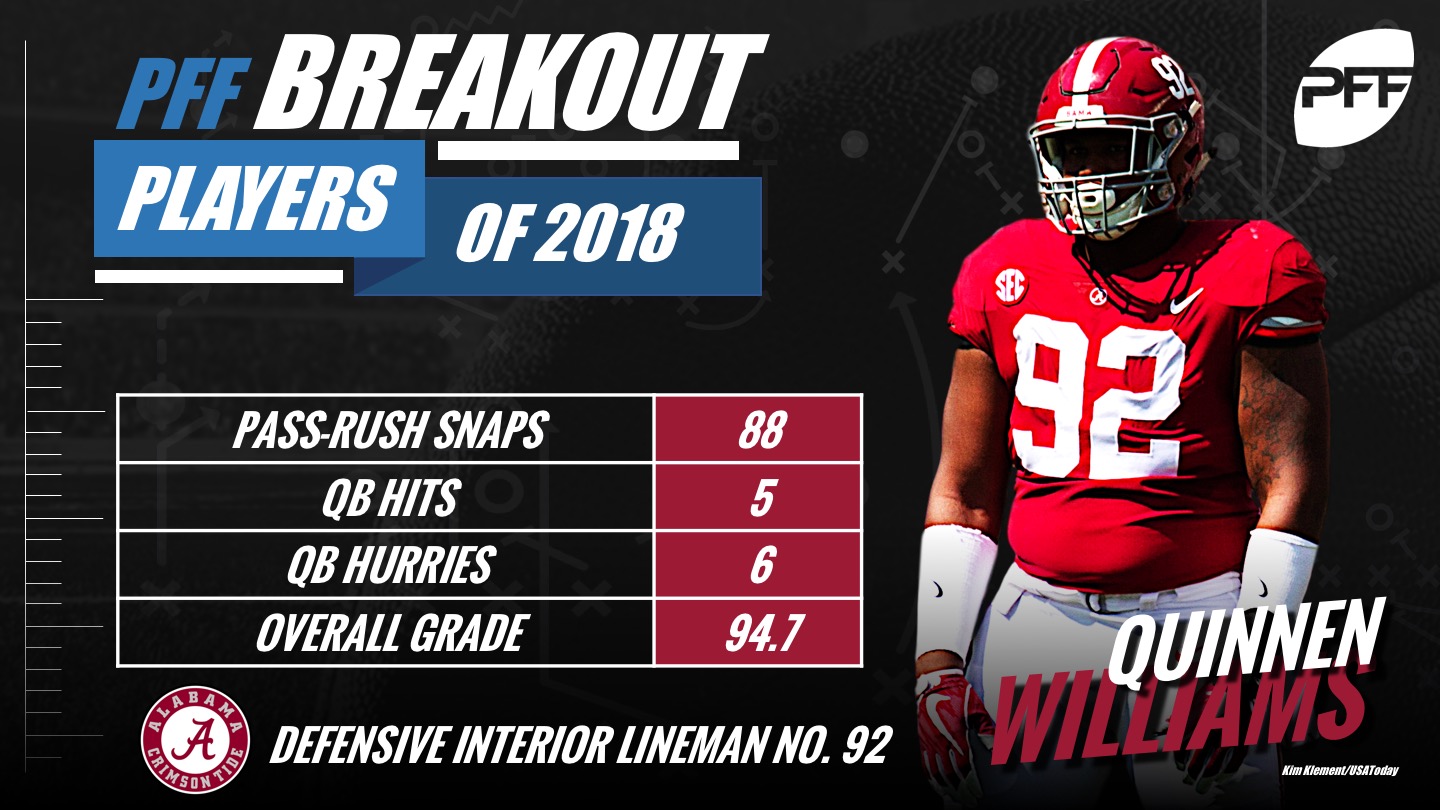 Much like his teammate above, Thompson not only finds himself second on this list, he finds himself second in terms of overall grade at any defensive position with a 93.3 overall mark. Thompson makes all the plays you'd want him to and has limited the mistakes in his first season of extended playing time. He has 24 total tackles despite just two missed tackle attempts and six defensive stops. Coverage statistics may not be the best way to look at a safeties play usually, but with Thompson moving all around the Alabama defense, he has been tasked as the primary coverage defender enough to allow them to fully represent his play. On 14 targeted passes, he's allowed just five receptions while he's intercepted two and broken up another four more. All told, his passer rating on throws into his coverage is a measly 18.2, nearly half the rating the quarterback receives for just throwing the ball in the dirt every play. 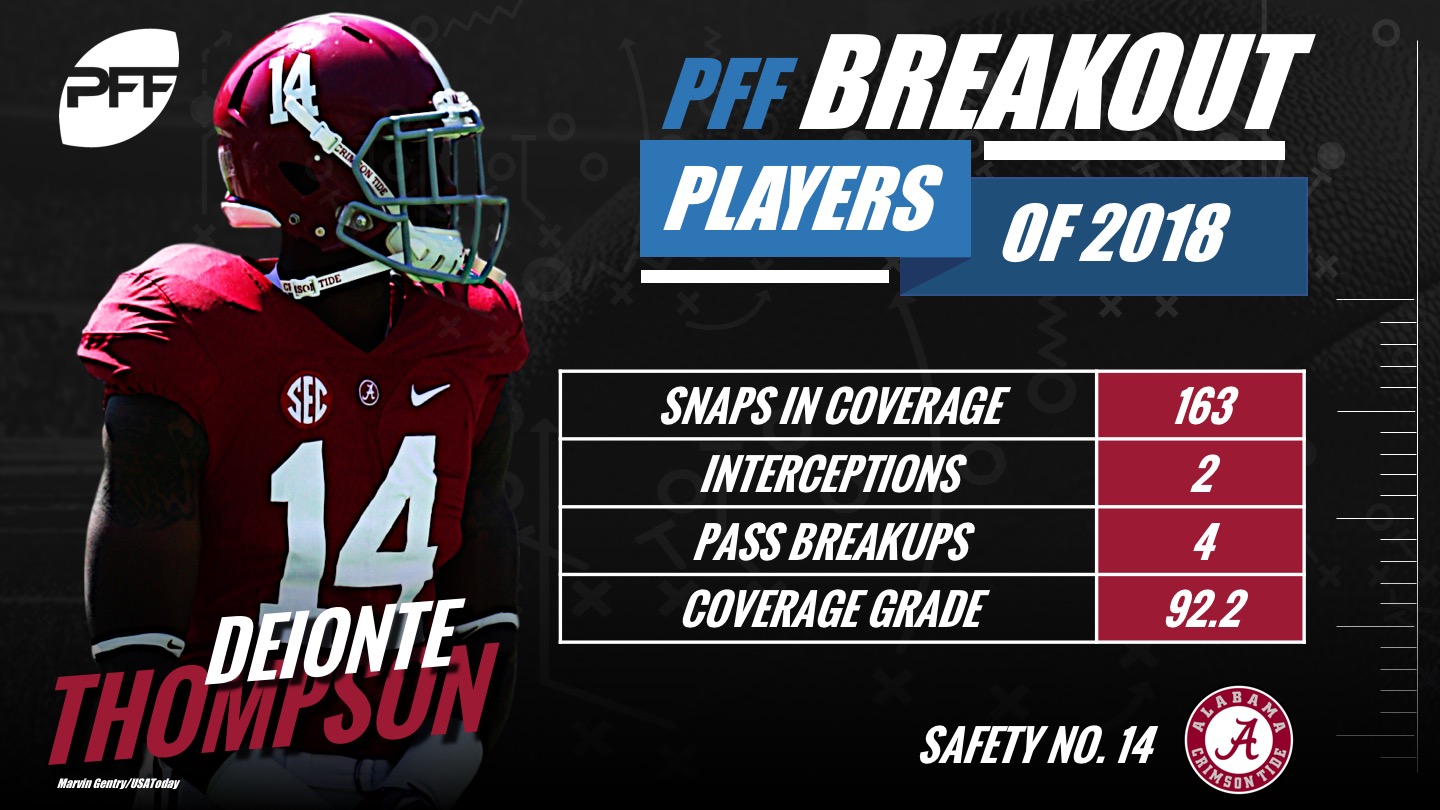 Currently holding the top receiving grade at the position (90.5), Shenault has proved seemingly invaluable to the Colorado offense. At 6-foot-2, 220 pounds, Shenault has also proven to be a mismatch with his rare combination of size, speed and elusiveness as he has forced or avoided 12 tackles after the catch this season, the most among receivers. He averages a whopping 12.0 yards after the catch on receptions and has accumulated 12 first downs in addition to three touchdown receptions. 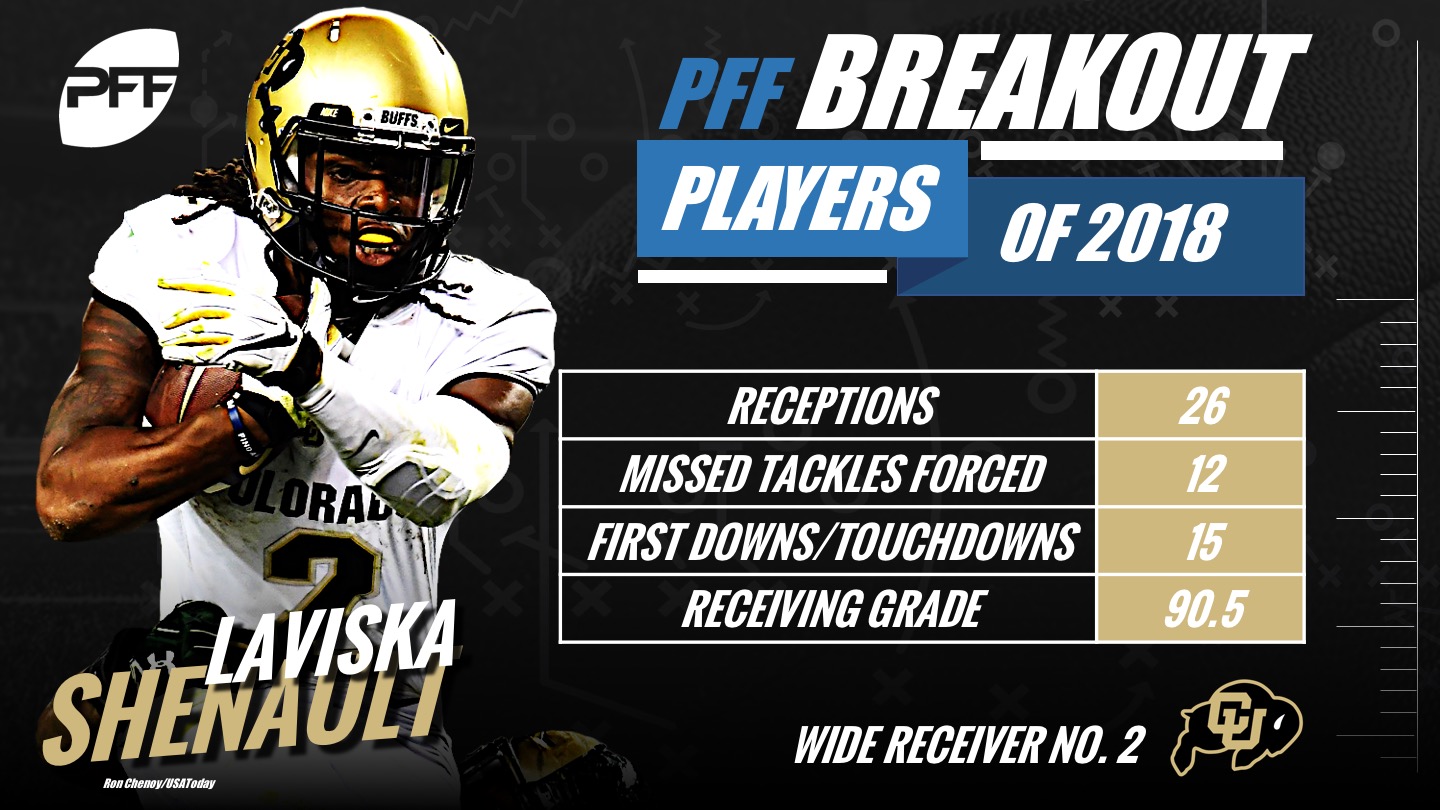 Willis has made his name known on the Hurricanes defensive front mainly due to his pass-rushing. His 90.0 pass-rushing grade ranks fourth at the position while his overall grade of 86.1 ranks 15th. He has registered 12 QB pressures, including two sacks, two QB hits and eight additional hurries – all on just 73 pass-rushing snaps. His pass-rush productivity of 9.7 ranks tied for eighth among all interior defensive linemen. 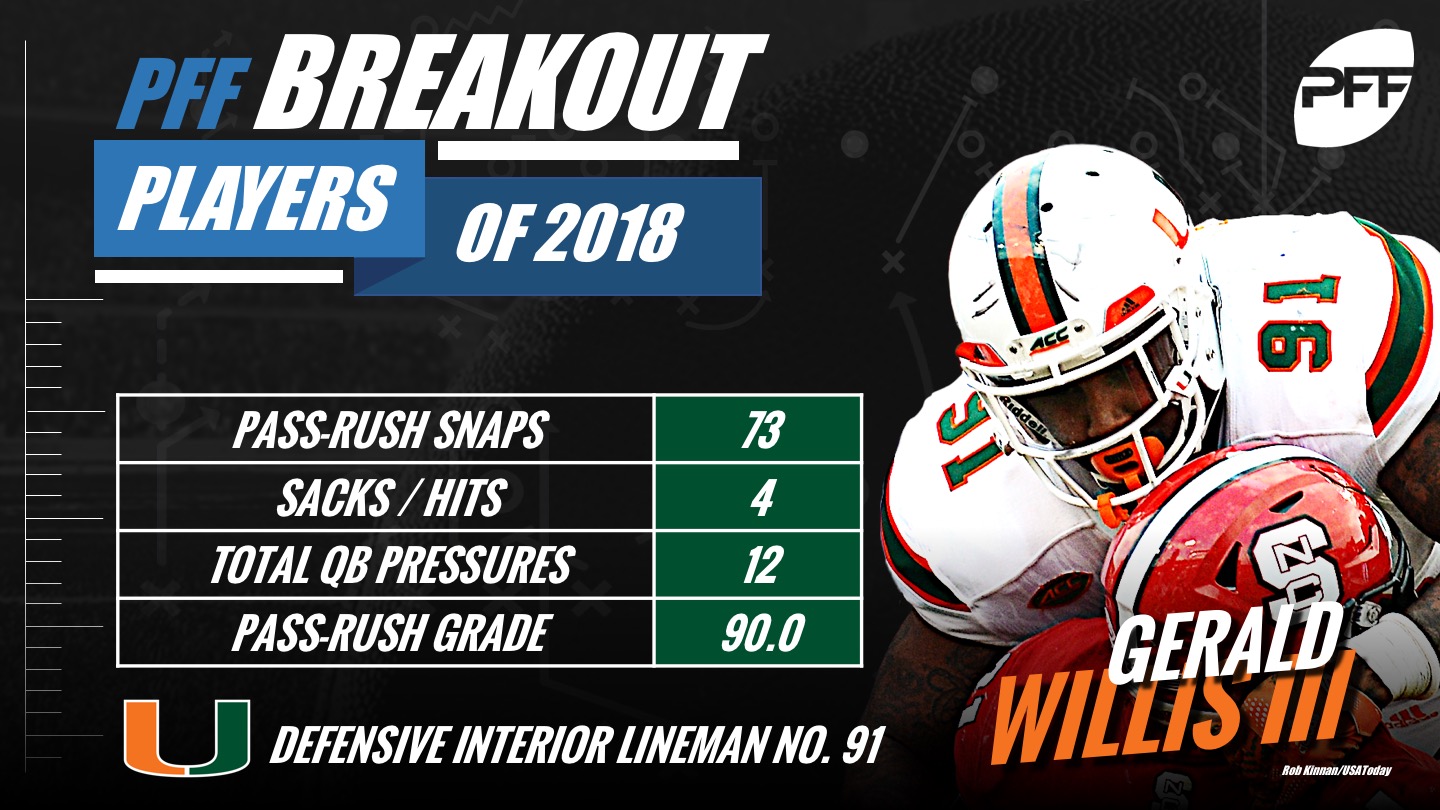 Ya-Sin has rocketed up what could be called the Group of 5 impact player list with his highlight-reel interceptions and all-around solid play.

He's currently the seventh-ranked cornerback in the country at 84.2 overall and has a pair of interceptions to go along with two more pass breakups on 28 targets in his primary coverage. He's allowed just 8.1 yards per catch allowed and limited receivers to just a long reception of 15 yards this year. 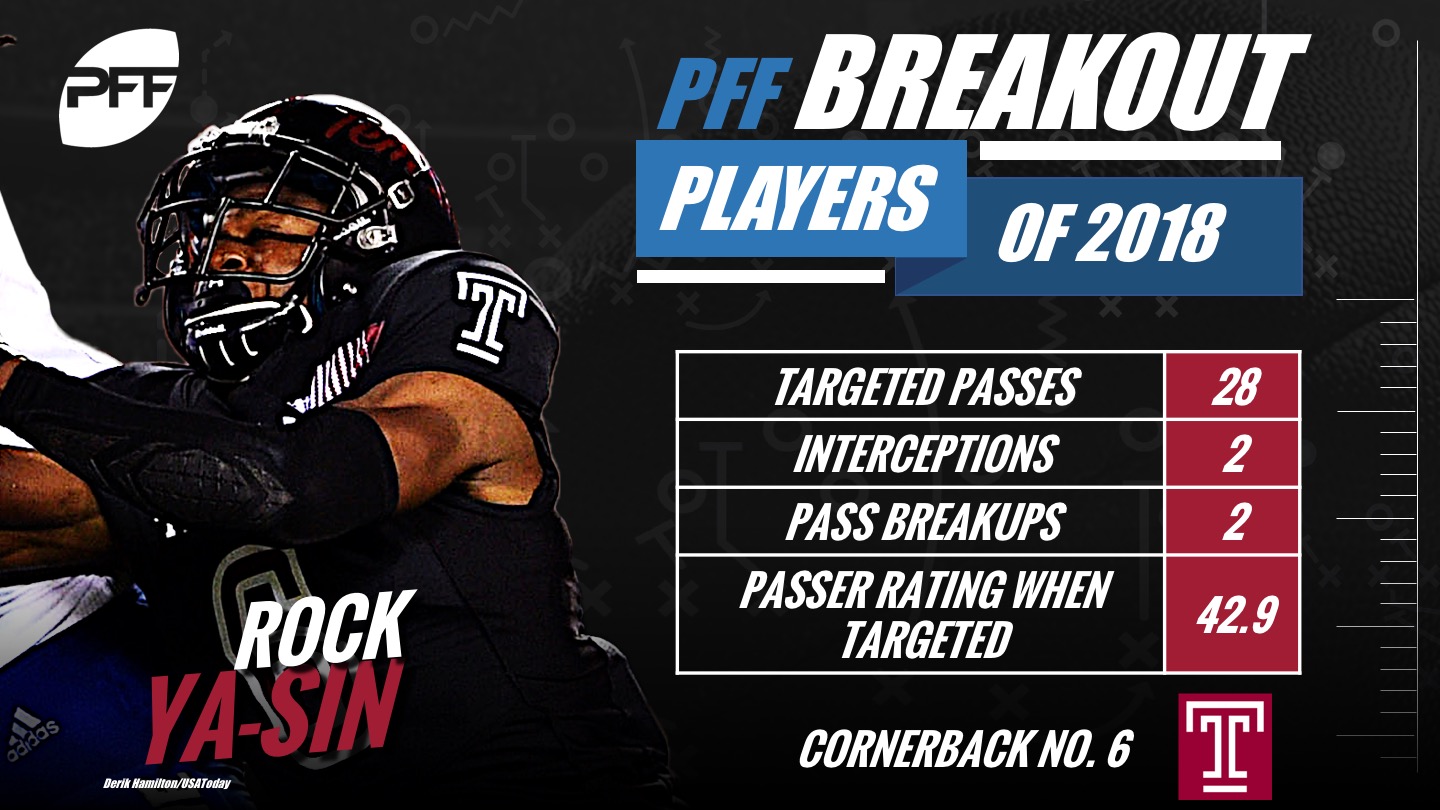 Making his name known on national television against Clemson in Week 2, Rogers has continued his breakout year with the Aggies, hauling in 13-of-16 targets so far for 191 yards, all without dropping a pass. His size causes problems for defensive backs at 6-foot-3, 210 pounds, Rogers has hauled in multiple catches in every game this season, accumulating nine additional first downs to his two touchdown receptions as 11 of his receptions have moved the chains or put points on the board. 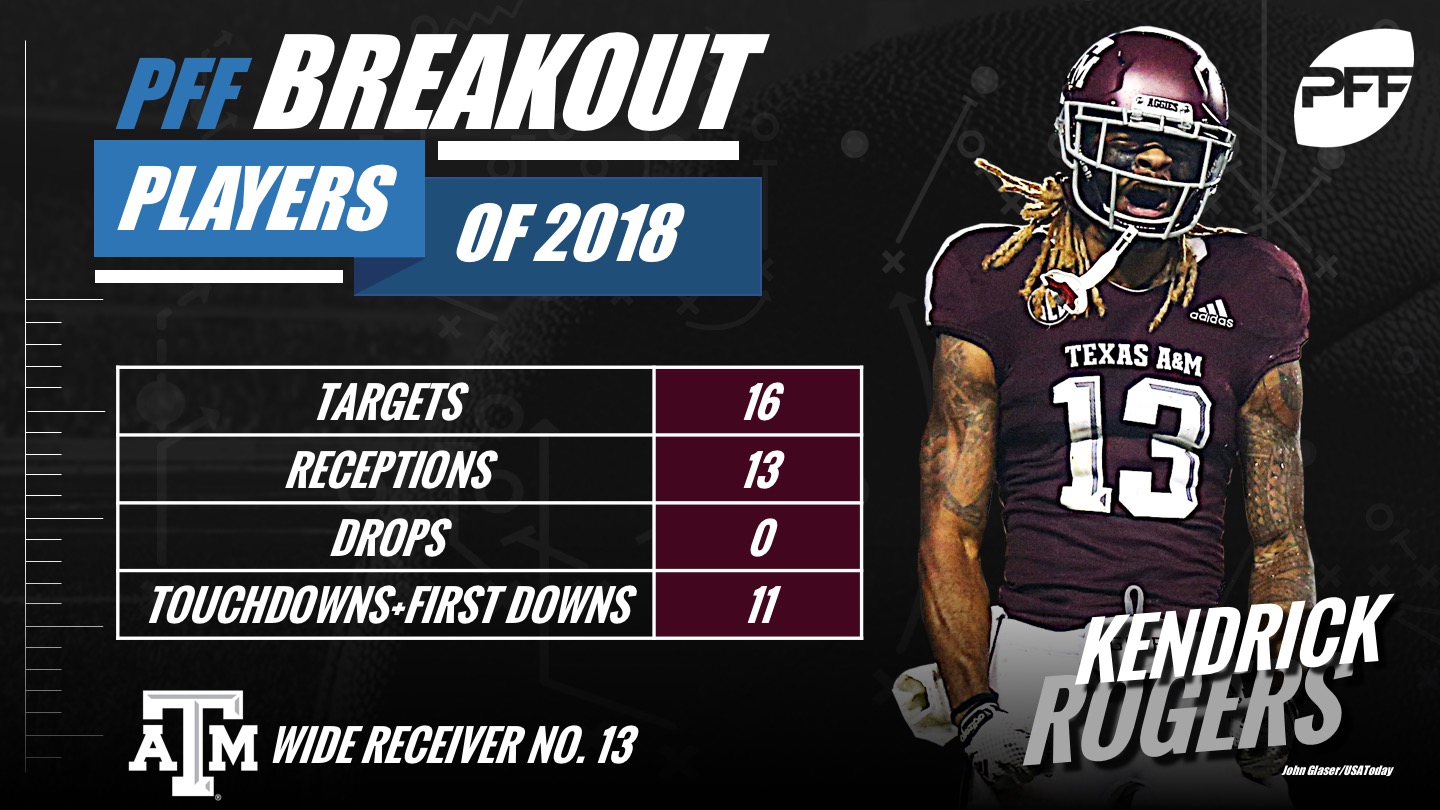 Waiting for two years behind the second overall pick in the 2018 NFL Draft will immediately poise you to be a breakout star, and that's exactly what Sanders has been able to do in his first action as the bell cow at Penn State. He has accumulated 28 combined first down and touchdowns, ranking third at the position while he leads the group of FBS running backs with 20 carries of 10 or more yards, showing his breakaway ability. Sanders is also tied with conference foe Jonathan Taylor for most missed tackles forced by a Power-5 running back at 21. 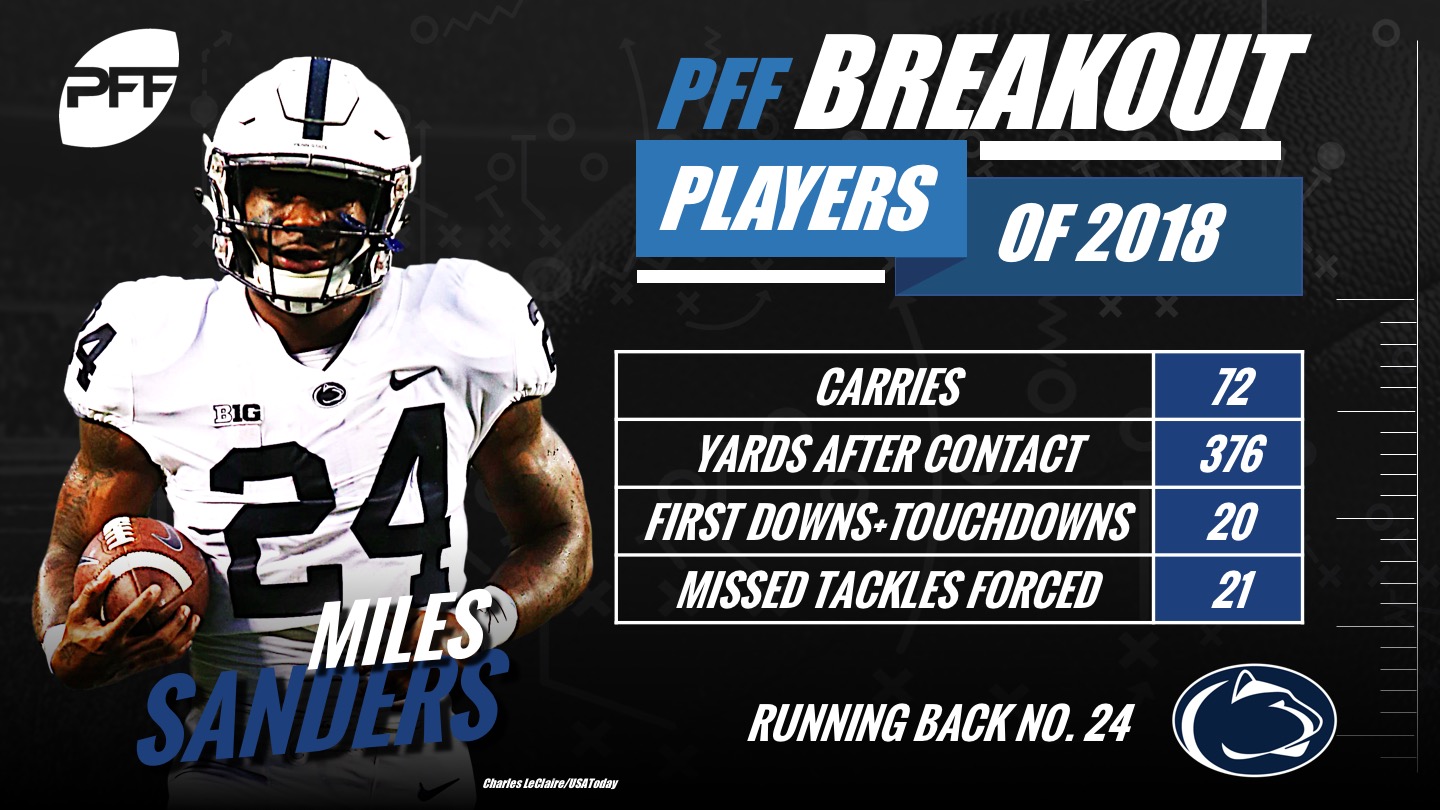 Landman has been all over the field for the Buffaloes defense in 2018. Currently our highest-graded linebacker at 90.8 overall, Landman has impressed in all facets of the game on defense, pass coverage, run defense and pass-rushing. He's rushed the passed just six times but brought in a sack and a hurry while he's recorded 17 stops on 96 snaps in run defense. In coverage, however, is where he's shone brightest, allowing just one reception on four targets, intercepting two and breaking up the other pass for a 0.0 passer rating when targeted. 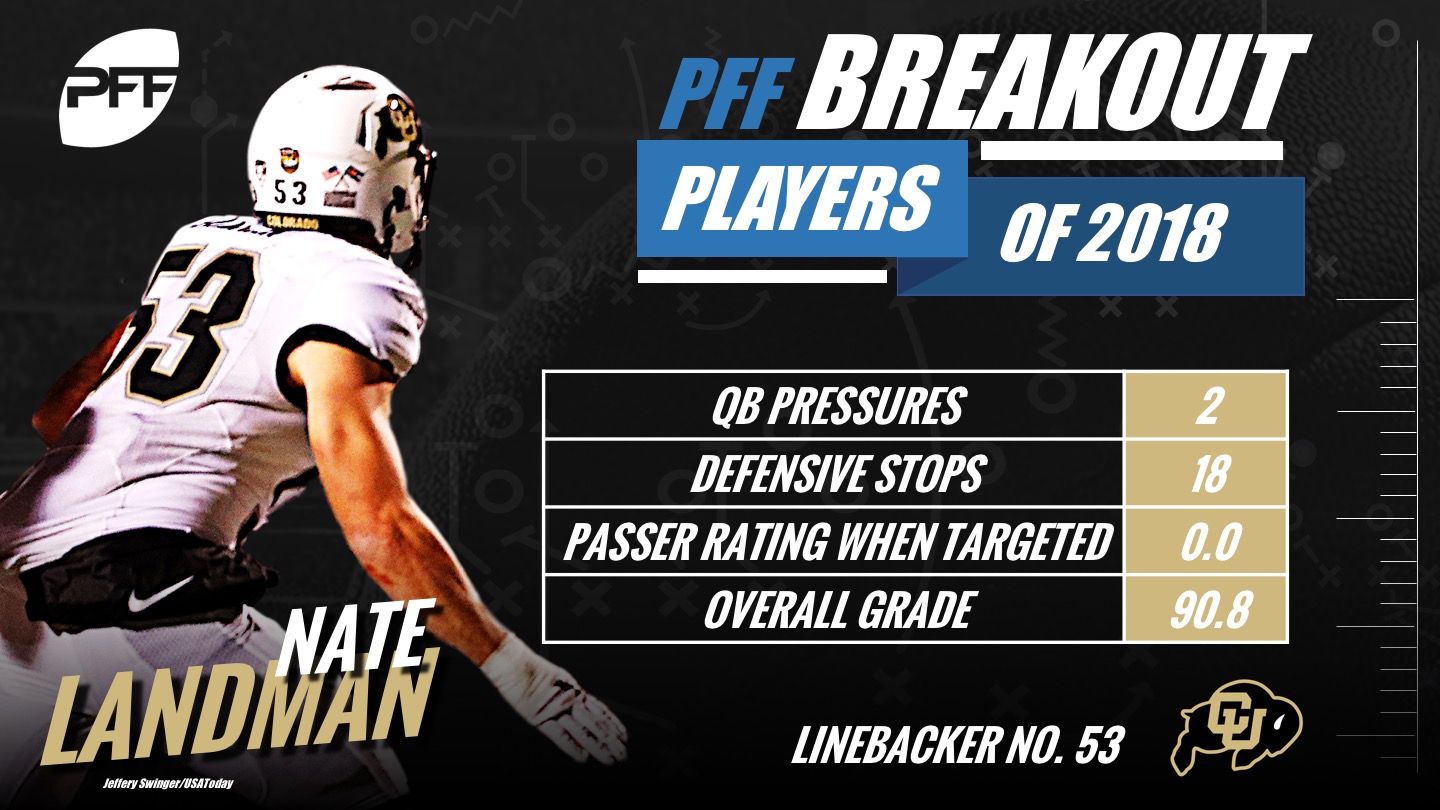 A true mismatch for any offense to contend with, Snowden stands 6-foot-7 and tips the scales at 225 pounds. He's played 93 snaps against the run, 75 pass-rushing snaps and 41 more in pass coverage. Snowden has racked up eight QB pressures, nine defensive stops and also brought in a combined three plays on the ball (1 INT, 2 PBU). 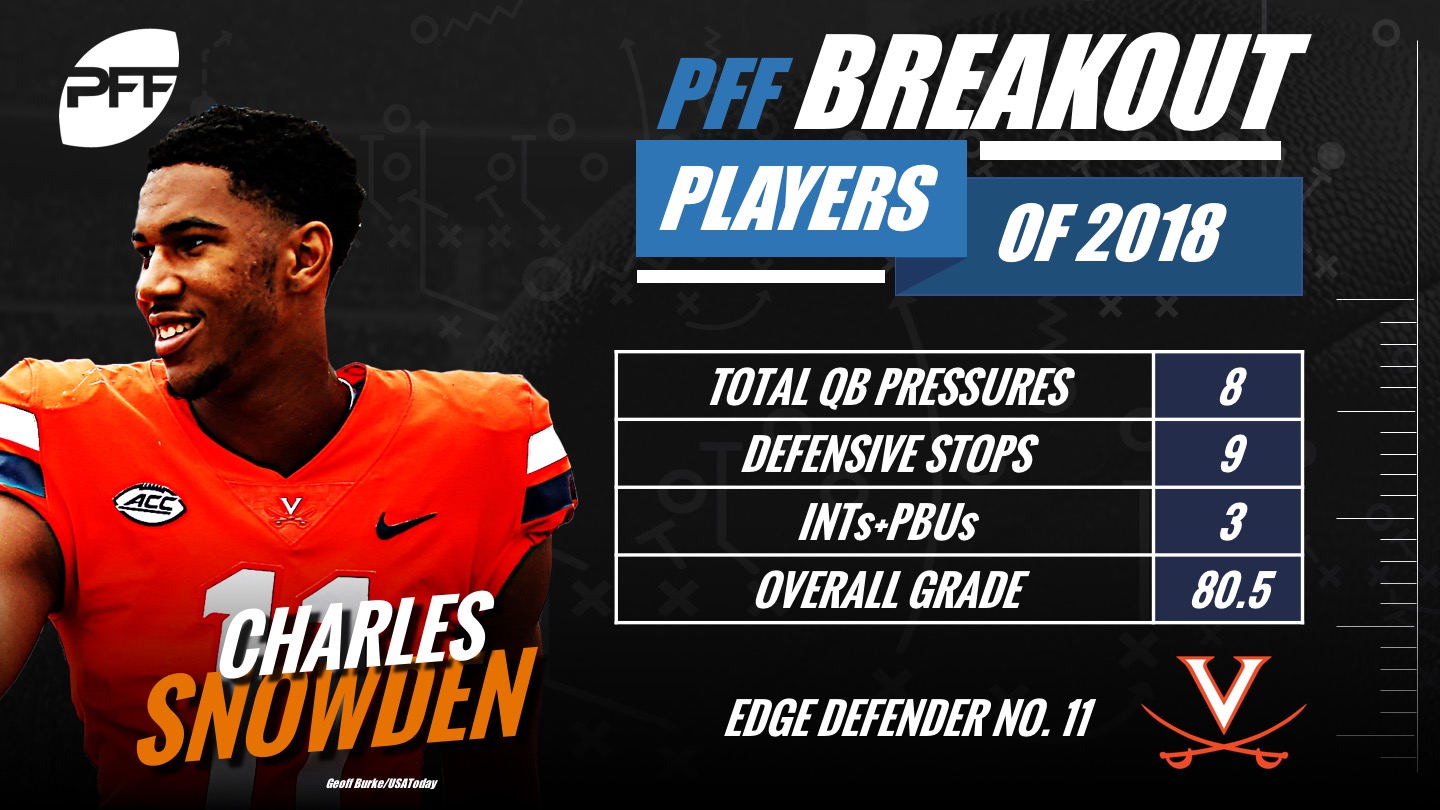 Lemieux makes the cut here not by playing a larger amount of snaps than previous seasons, but rather because he's off to his best start in his three years at Oregon. Lemieux played 729 and 938 snaps in his first two seasons, respectively, never grading above a 66.3 overall for a season. This year, he currently holds an 83.7 overall grade across 287 snaps, good enough to rank fourth among guards this season. 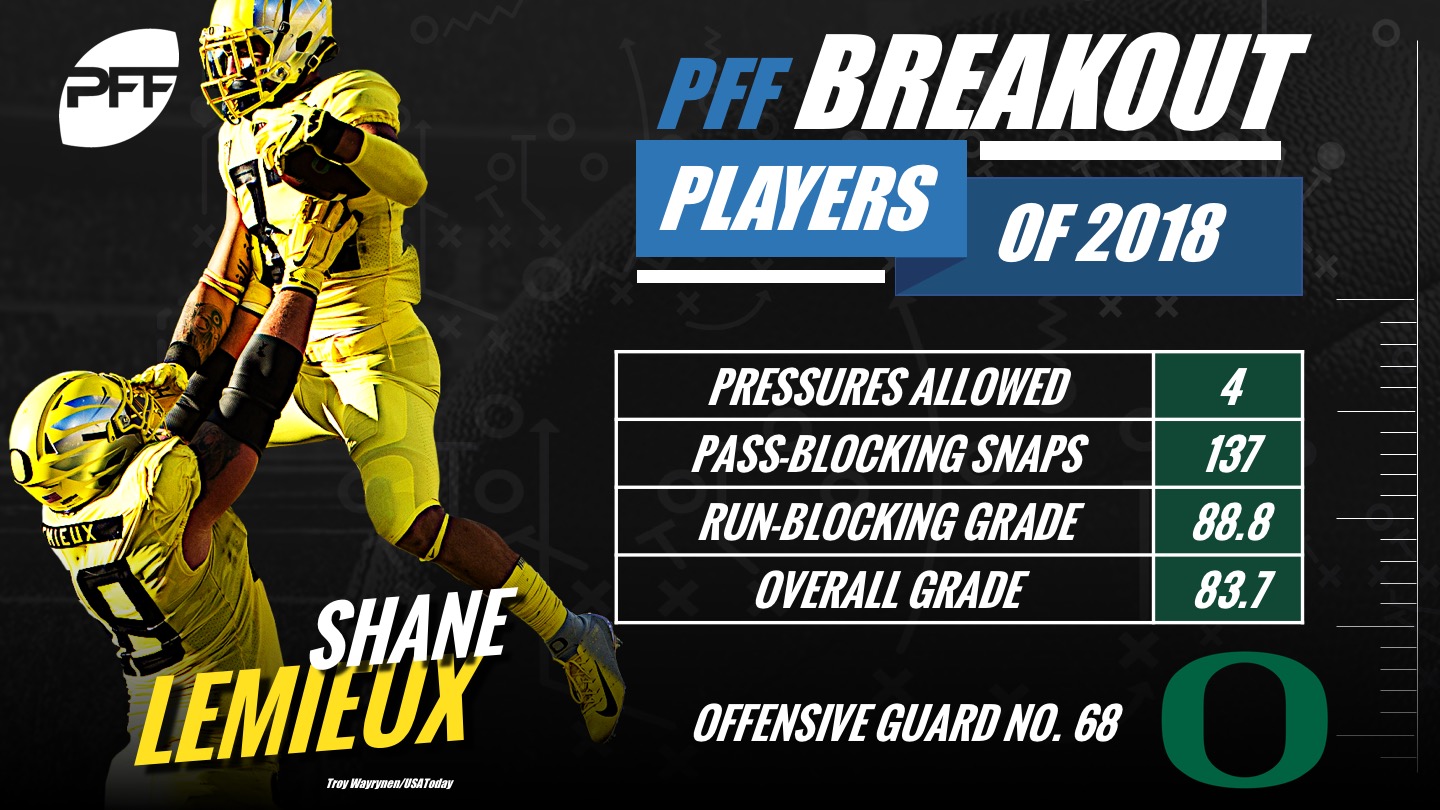