Which NFL defenses use the most unique schemes?

After diving into NFL offensive schemes, we'll attack defensive schemes here. Defense is much more of a responsive side of the ball — meaning that what a defense does is going to be far less definitive, due to having to match up to what opposing offenses are doing. Unbalanced schedules being what they are, as well, there are far fewer principal components that contribute to the fingerprint of what a defensive scheme is.

Principal components for a defensive scheme are made up of box counts used, number of even and odd fronts used, coverages used, blitz and stunt rates (on neutral downs), and many other things. Some of these are correlated with each other. For example, here’s the relationship between blitz rate and man coverage rate: 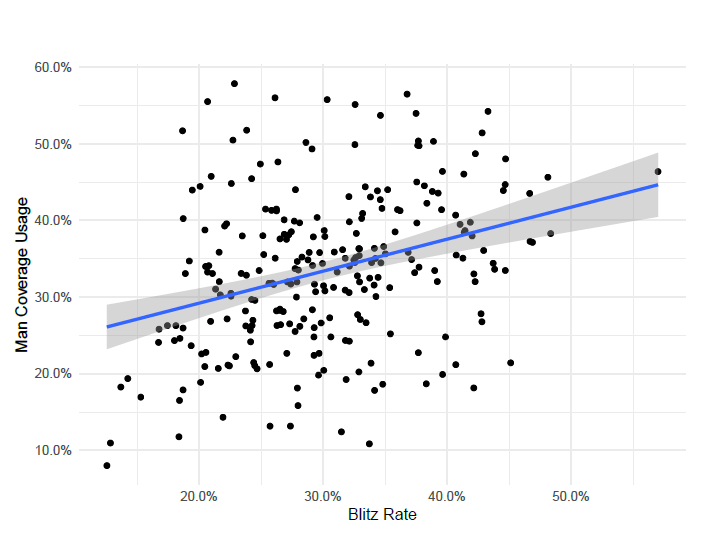 While the two variables are not perfectly correlated, a correlation does exist, suggesting that, instead of having two unique pieces of information here, you really have less than two.

Without further ado, here are the first principal components of defensive scheme, which account for a lot more variance than the offense’s first two do: 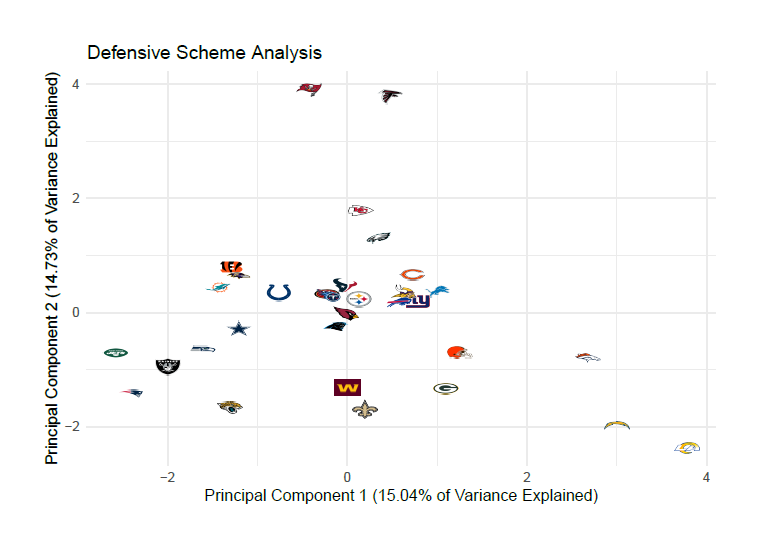 Distance from (0, 0) — at least how it pertains to the first two principal components — can be viewed as a measure of uniqueness. Uniqueness isn’t necessarily good, but the right kind actually does influence the betting markets, although more so on the offensive side than the defensive side of the ball.

The Vic Fangio defenses really are a thing, with Raheem Morris/Brandon Staley’s Rams and Staley’s Chargers out-Fangioing Fangio. Additionally, you have Joe Barry’s Packers and Browns creeping into that territory. Fangio defenses tend to use low box counts — the Rams used fewer than six men in the box on average in neutral situations, with Green Bay and Denver the next two lightest. His defenses are also known for low rates of not playing the same coverage as shown — the Rams did so on less than 55% of their admissible downs, while the Chargers ranked third, doing so less than two-thirds of the time.

The Gus Bradley-ish tree to the left-hand side of the graph, featuring a group of teams that use a lot of even fronts and odd coverages, does emerge. It’s interesting that without Stephon Gilmore in 2021, the Patriots trended more in this direction than they had in previous years.

The Buccaneers and Falcons are in their own worlds here, but for different reasons. Atlanta actually disguised coverages at a top-five rate, but the team also ran stunts at a bottom-five rate while using a below-average rate of man coverages and blitzes. Tampa Bay, now helmed by former defensive coordinator Todd Bowles, had a top-three rate of high box counts and blitzed more than any team in football. The blitz propensity might have cost them a chance at repeating in 2021, but alas. Deeper into the set of principal components, you would see Tampa Bay and Atlanta separated more.