Over the past five weeks, we’ve seen a wide range of blowouts, injuries and fourth-down decisions. And because of this, our thoughts on the league's teams have changed.

Today, we’ll rank each NFL team and explain our choices through visualizations. We based these rankings on PFF’s power rankings tool and adjusted them based on our beliefs and data.

PFF’s power rankings tool is based on the relative quality of each team as defined by point-spread team ratings, the number of points each team would be better or worse than an average team on a neutral field.

Sitting at 4-1, the Giants are starting to put the league on notice, with running back Saquon Barkley bursting onto the scene again. With virtually zero WAR lost due to injury, they’ve been a very healthy team to start the season. We have them sitting at 17th, as they had two “easier” wins against the Panthers and Bears but did enjoy an impressive win over the Packers.

This upcoming week, they face a big test against a Ravens offense that has torn up defenses this season, so can the Giants keep pace?

The Titans have also punted on fourth down more than any other team and are conservative in their playcalling.

We know that injuries can make or break a team’s chances of winning. The question is, can the teams overcome them?

To measure the impact of injuries this season, we've looked at PFF WAR lost.

PFF WAR assigns a number to how good a player is in a season and how many wins they added to the team relative to an average player in their position. Since it is calculated from season to season, rookies are not included in this visualization. We also included suspensions in the total WAR lost. 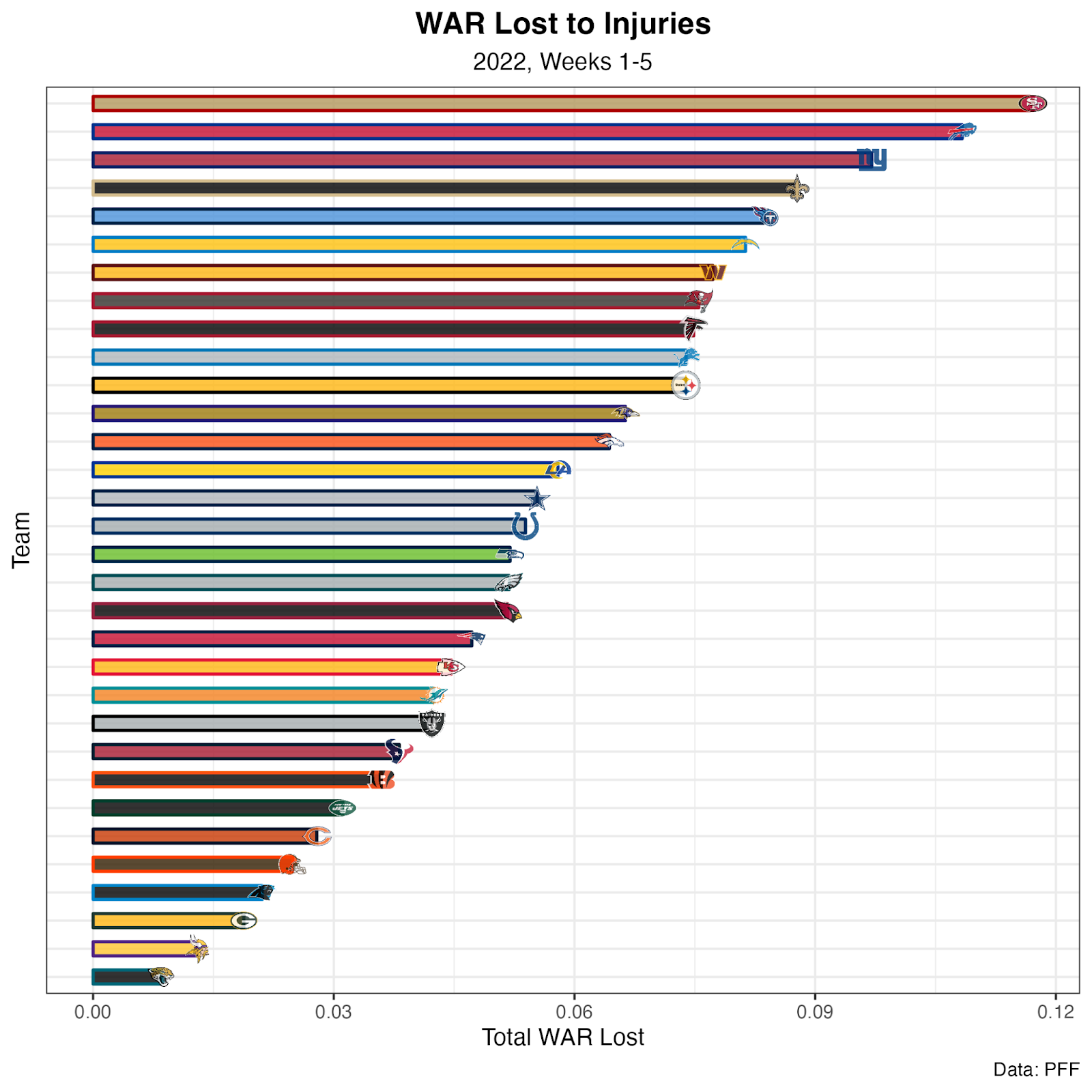 The 49ers have been hit hard: The 49ers have lost the most WAR this season. Safety Jimmie Ward (0.438 WAR) was their biggest loss. Other significant losses include linebacker Azeez Al-Shaair (0.194), running back Elijah Mitchell (0.132) and quarterback Trey Lance (0.185).

The Bills have overcome: While the Bills have lost key defensive players — including Tre’Davious White, Micah Hyde and Xavier Rhodes — their younger players have stepped up. It also helps that their offense ranks second in the league in expected points added (EPA) per play.

Elo is a measure of a team’s strength based on their game results and the strength of their opponents. Following Week 5, we can use our PFF Elo to determine the biggest risers and fallers.

The Rams have slowly been falling in PFF Elo and notably scored only 10 points at home against the Cowboys in Week 5. On the other side of the division, the 49ers have increased their PFF Elo and are currently riding a two-game win streak into their matchup with the Falcons.

A close call for Tom Brady: The Buccaneers had the biggest change in Elo from Week 4 to Week 5 despite losing to the Chiefs in Week 4. Tom Brady had never lost to the Falcons in his career, but Marcus Mariota & Co. came back from 21-0 to score 15 points in the fourth quarter. In the end, a roughing-the-passer penalty came at the right time to ensure that the Falcons wouldn’t have another chance to score.

We have the Buccaneers sitting at No. 4 in our rankings, and upcoming games against the Panthers and Steelers may lead to easy victories to make up for home losses in Weeks 3 and 4.

Fourth-down decision-making can be very contentious. Last week, Bengals head coach Zac Taylor’s decision to go for it late in the game resulted in no points. And if they had kicked a field goal, the Bengals might have won the game. Hindsight is 20/20.

Can we attribute the result of this play to a poor play call or bad decision-making? 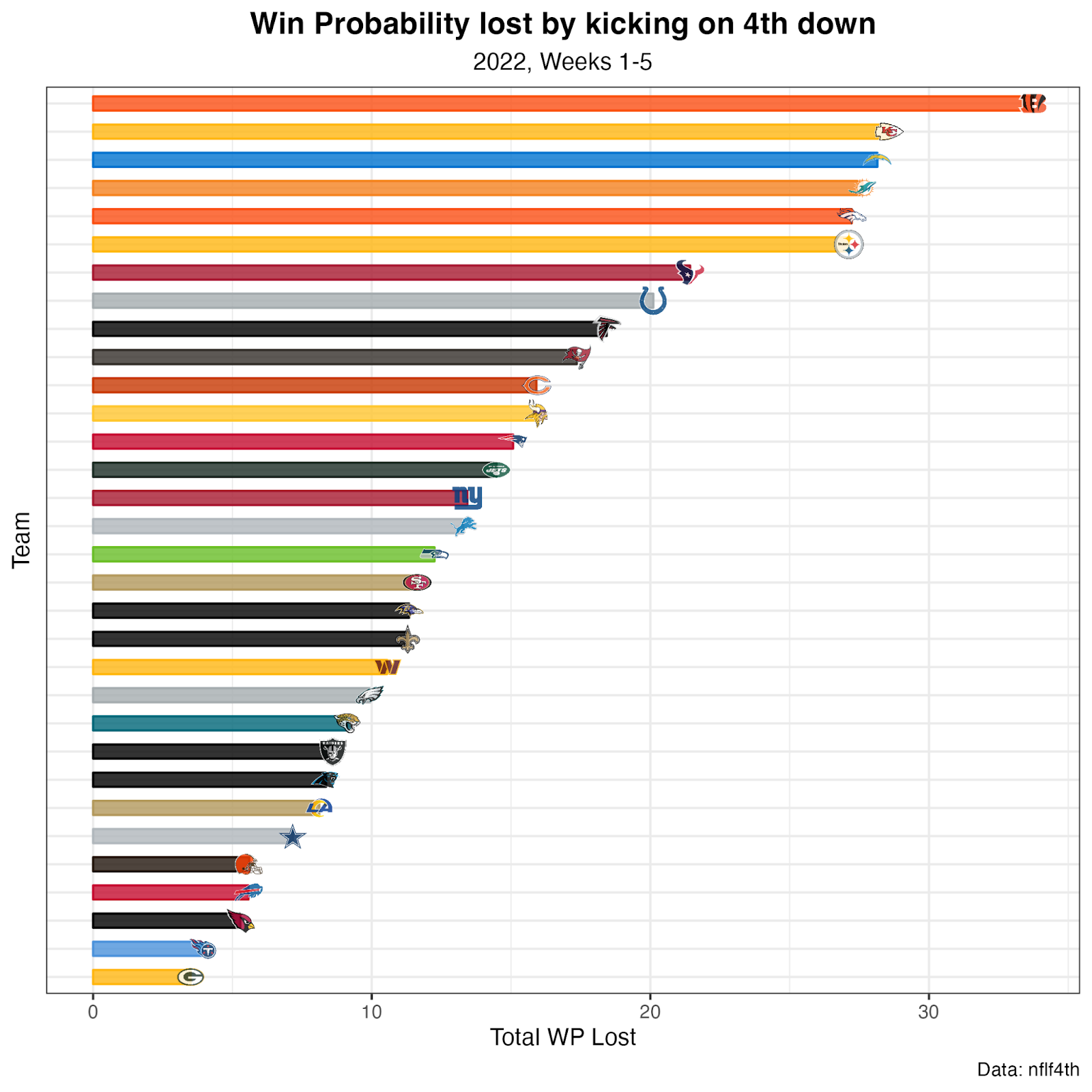 Though the Lions have won only a single game, they’ve been aggressive on fourth-down decisions. They are 14th in team offense grade — not bad for a one-win team — but they are 23rd in EPA per play on fourth down. Their aggressiveness has not been successful. Their defense has also been struggling, as their 50. 1 team defense grade ranks above only the Cardinals. This justifies Detroit's ranking at 29. 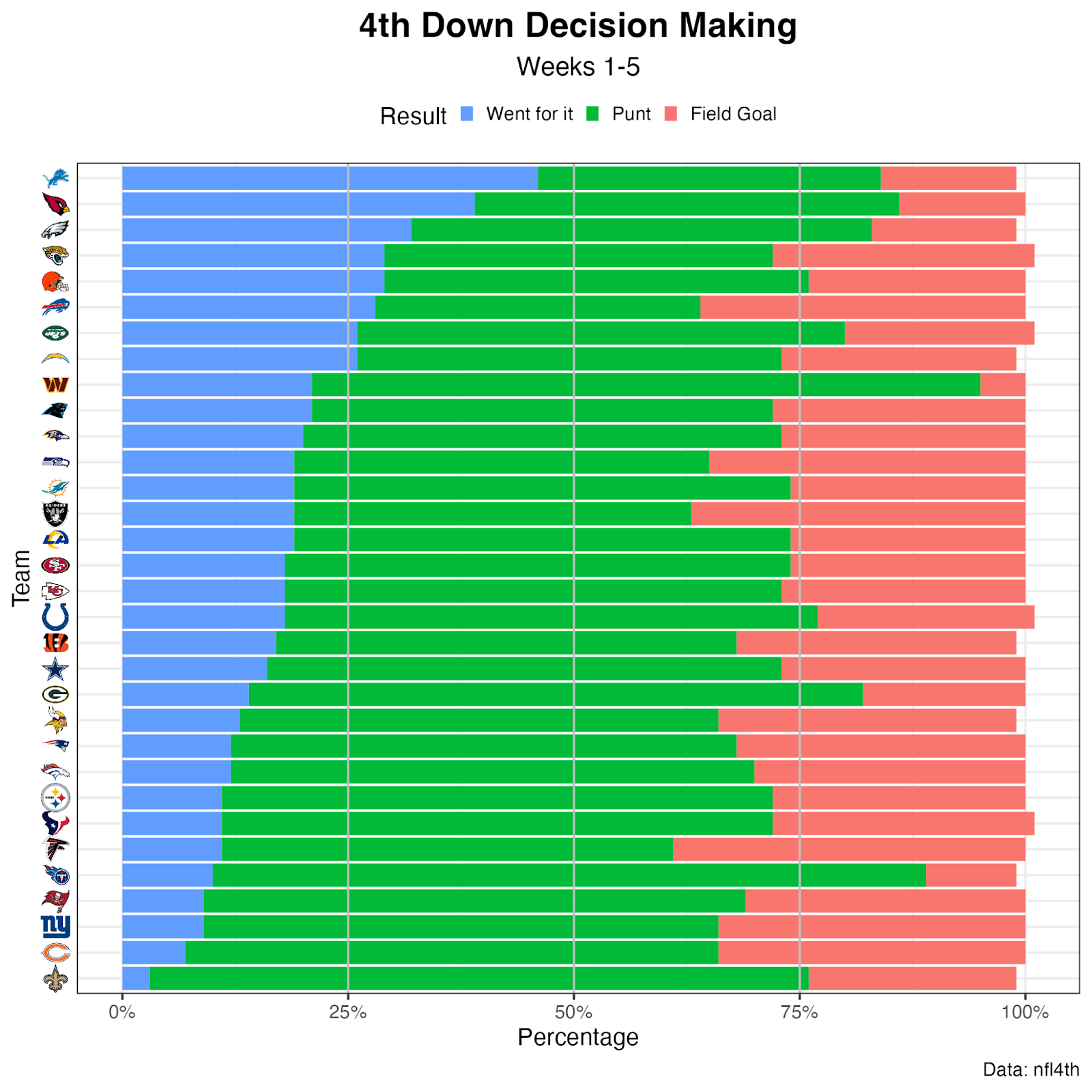